A Day in the Life: Mark Mauriello

It’s a typical Saturday night for Mauriello, one of the stars of Diane Paulus’s “The Donkey Show.” It starts at the American Repertory Theater’s Oberon stage and ends, like Saturday nights at Harvard often do, with a Felipe's run.
“For me, every second of every day is theater. I’m always interested in the self that we present, how we dress, how we talk...I love it all.”By Madeline R. Lear
By Henry S. U. Shah

Mark J. Mauriello ’15 is getting ready for a Saturday night out. He paints his nails green, sometimes adding silver sparkles to the fourth nail on his left hand.

“It shows that I’m married to glamour,” he says, before covering himself from shoulders to hairline with gold paint. He paints his lips and eyebrows shamrock-green. Then come the lightning bolts, one painted on each cheek. He strips down to put on a tiny silver thong, tights, tearaway gold pants, and a neon fishnet shirt. His hair is already pinned up, fixed into place, and sprayed a fierce green. He covers himself with glitter, dons a special pair of illuminated rabbit ears, as well as lime-rimmed aviator glasses without lenses. He laces up a pair of golden disco roller skates.

Doctor Wheelgood is ready to roll. 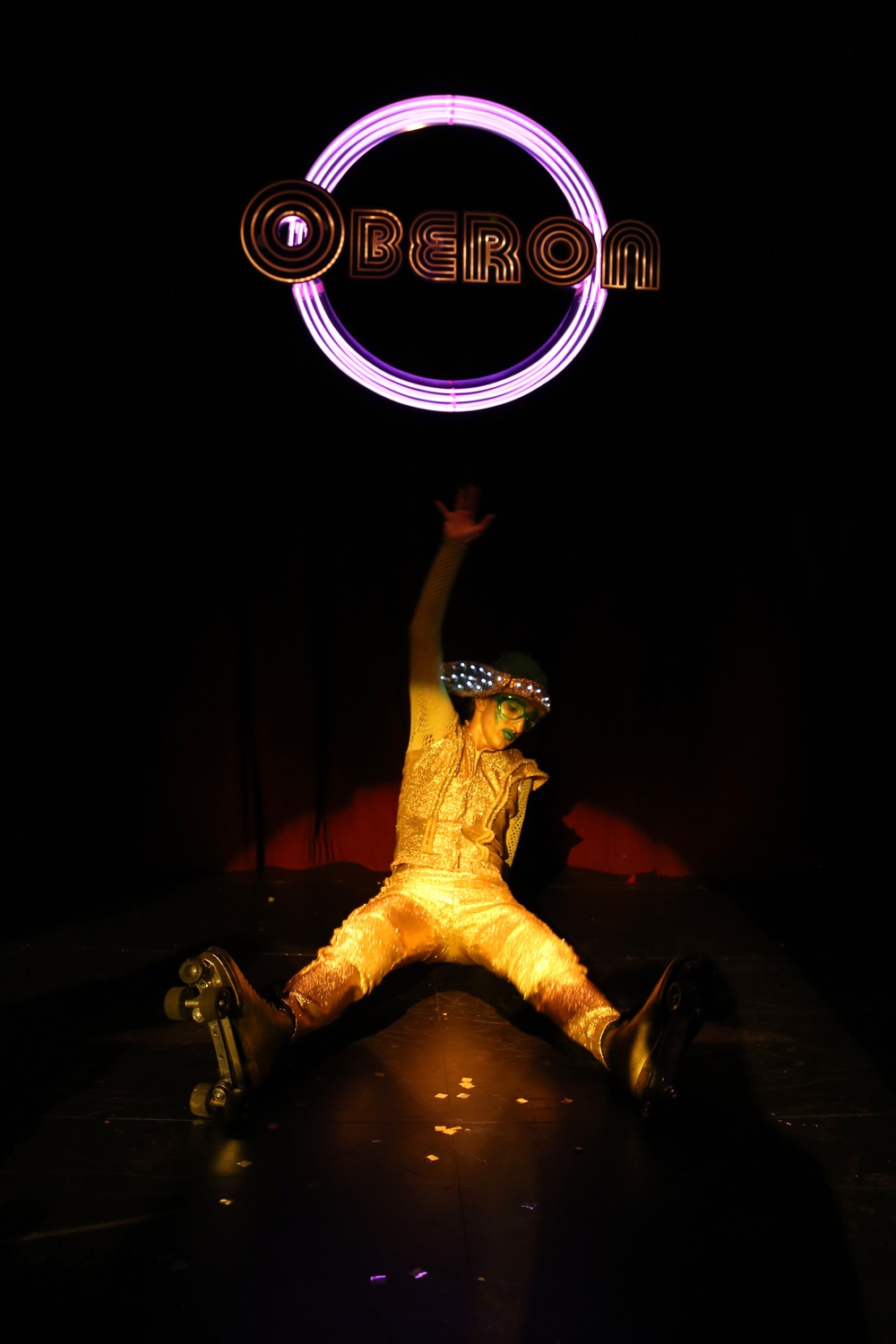 On the Ground - Mauriello pushes his physical limits during The Donkey Show. 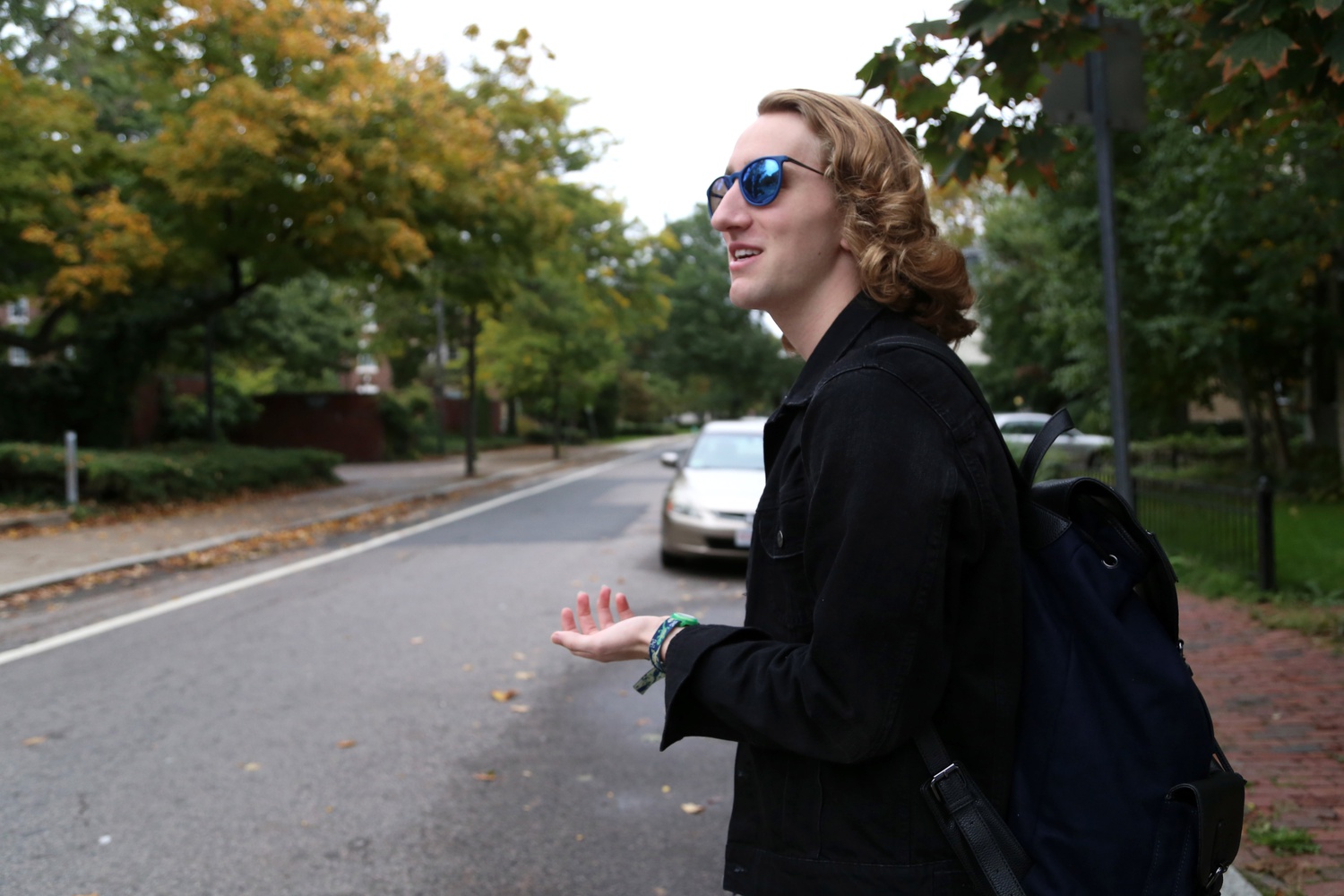 To Rehearsal - Mauriello heads to rehearsal for "Little Murders" at the SOCH during the afternoon. 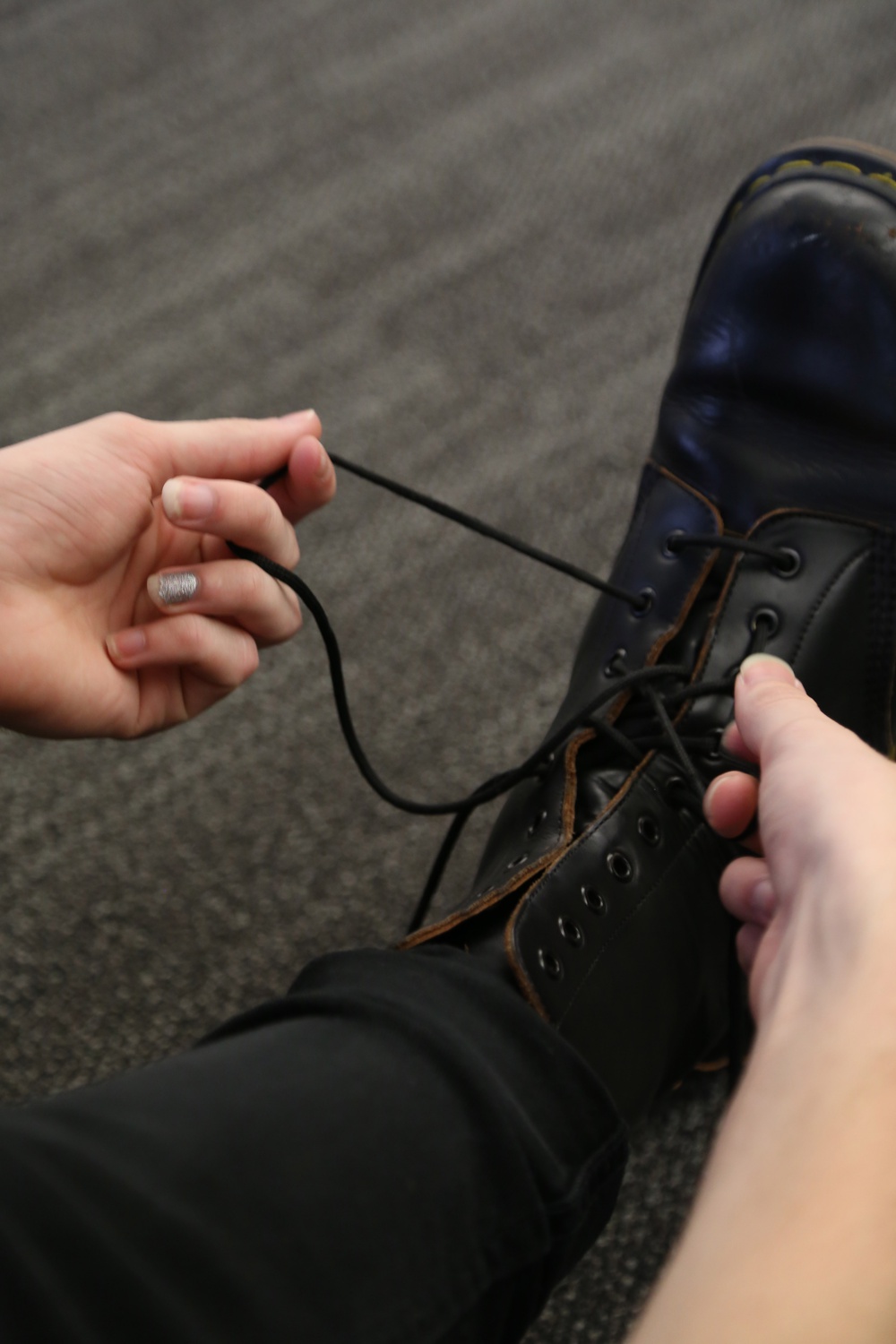 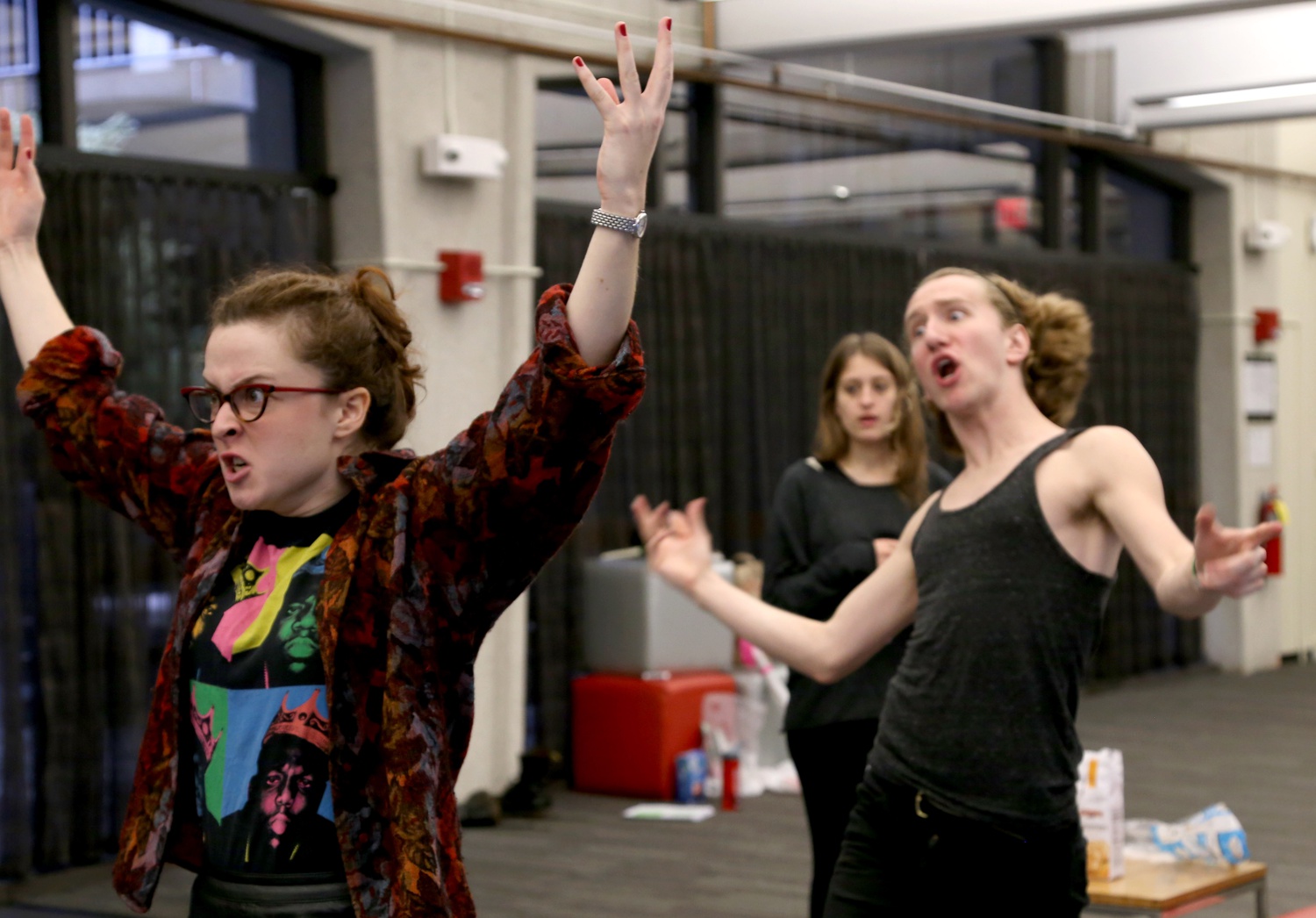 Family Strife - Mauriello yells at Elizabeth Leimkuhler '15 during rehearsal for "Little Murders" in which he plays her wife and she his husband. 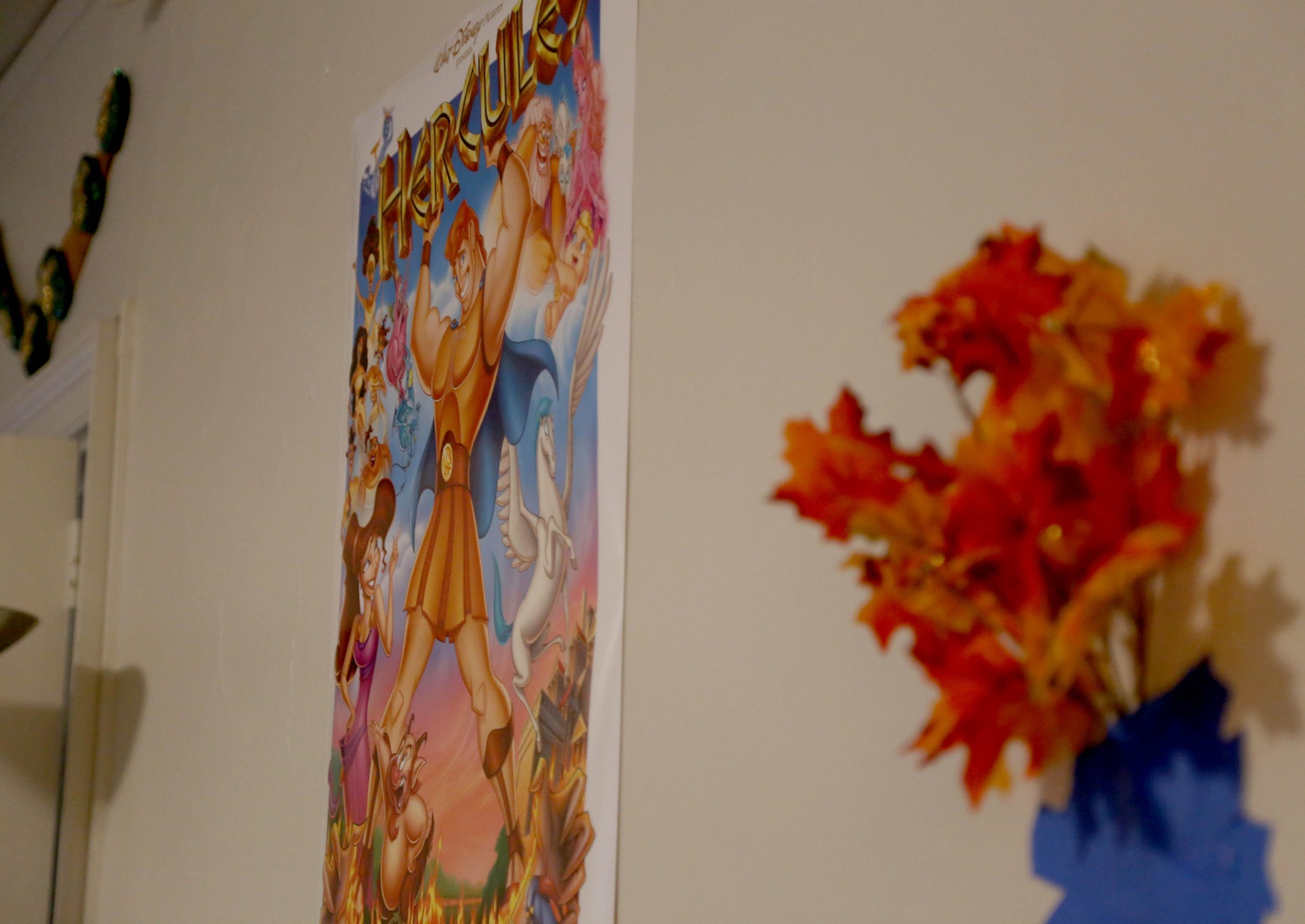 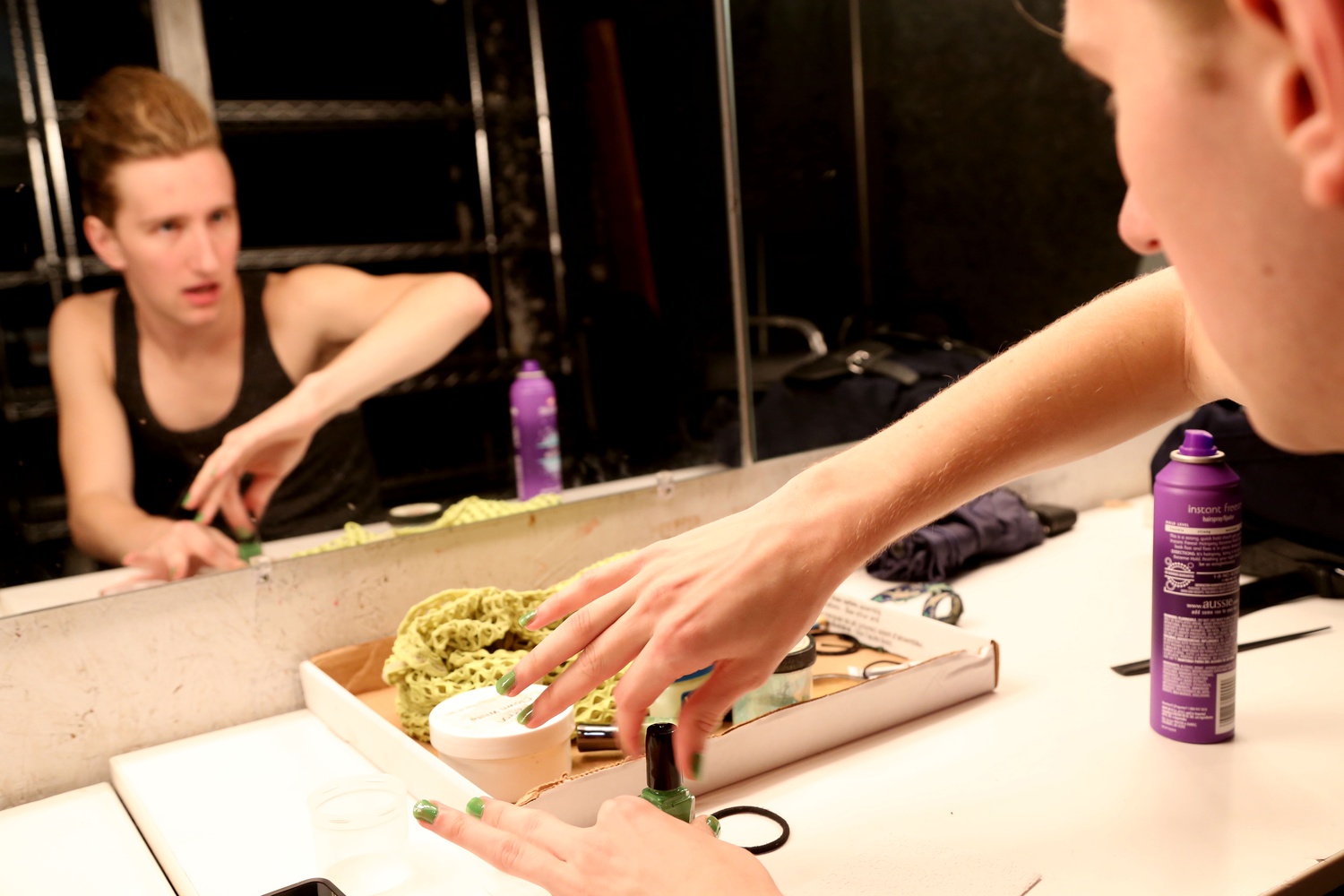 In the Mirror - Mauriello looks in the mirror as he prepares for "The Donk." 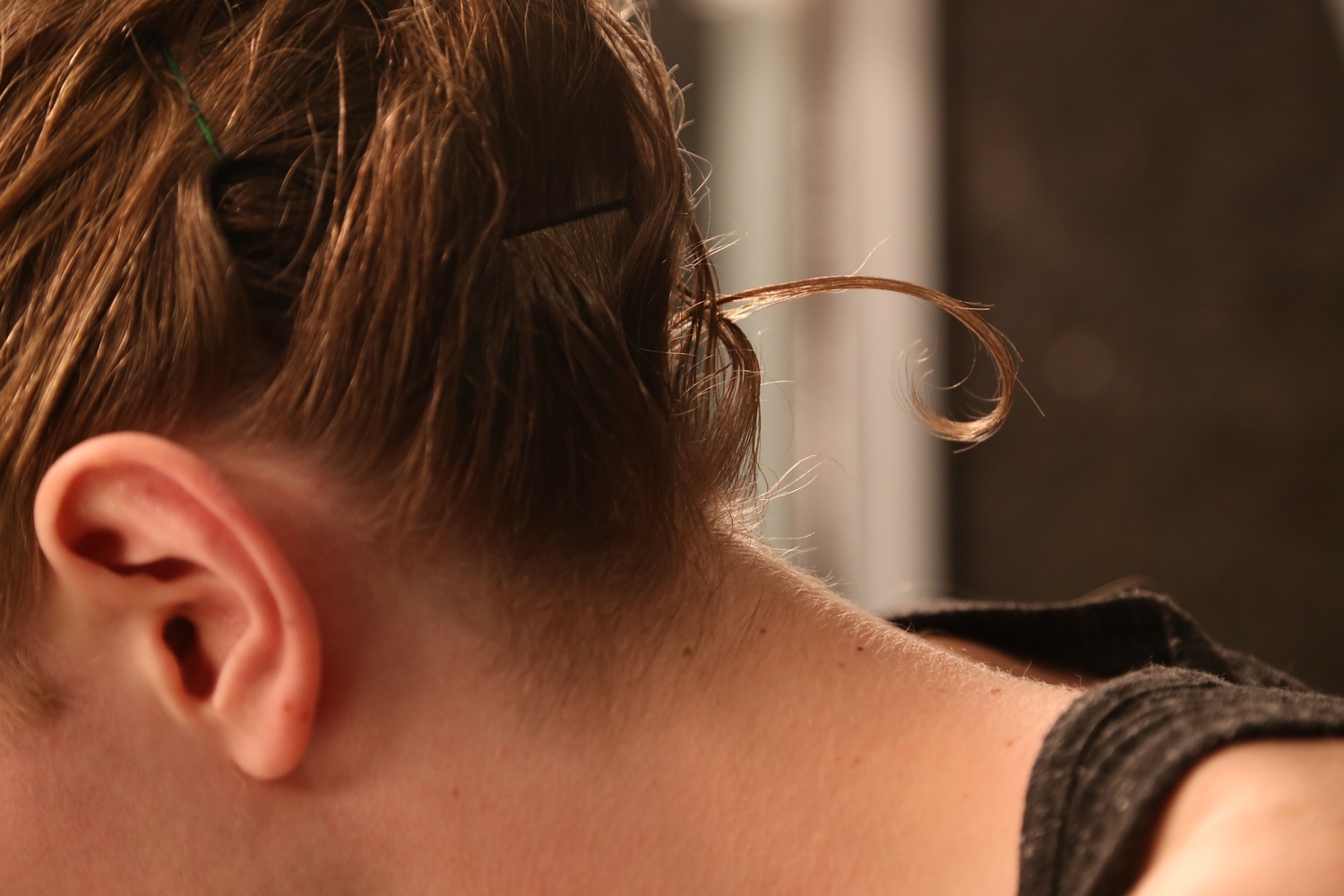 Becoming Puck - Mauriello paints his nails green while transforming into Doctor Wheelgood, a Puck-inspired, drug-dealing matchmaker in The Donkey Show. 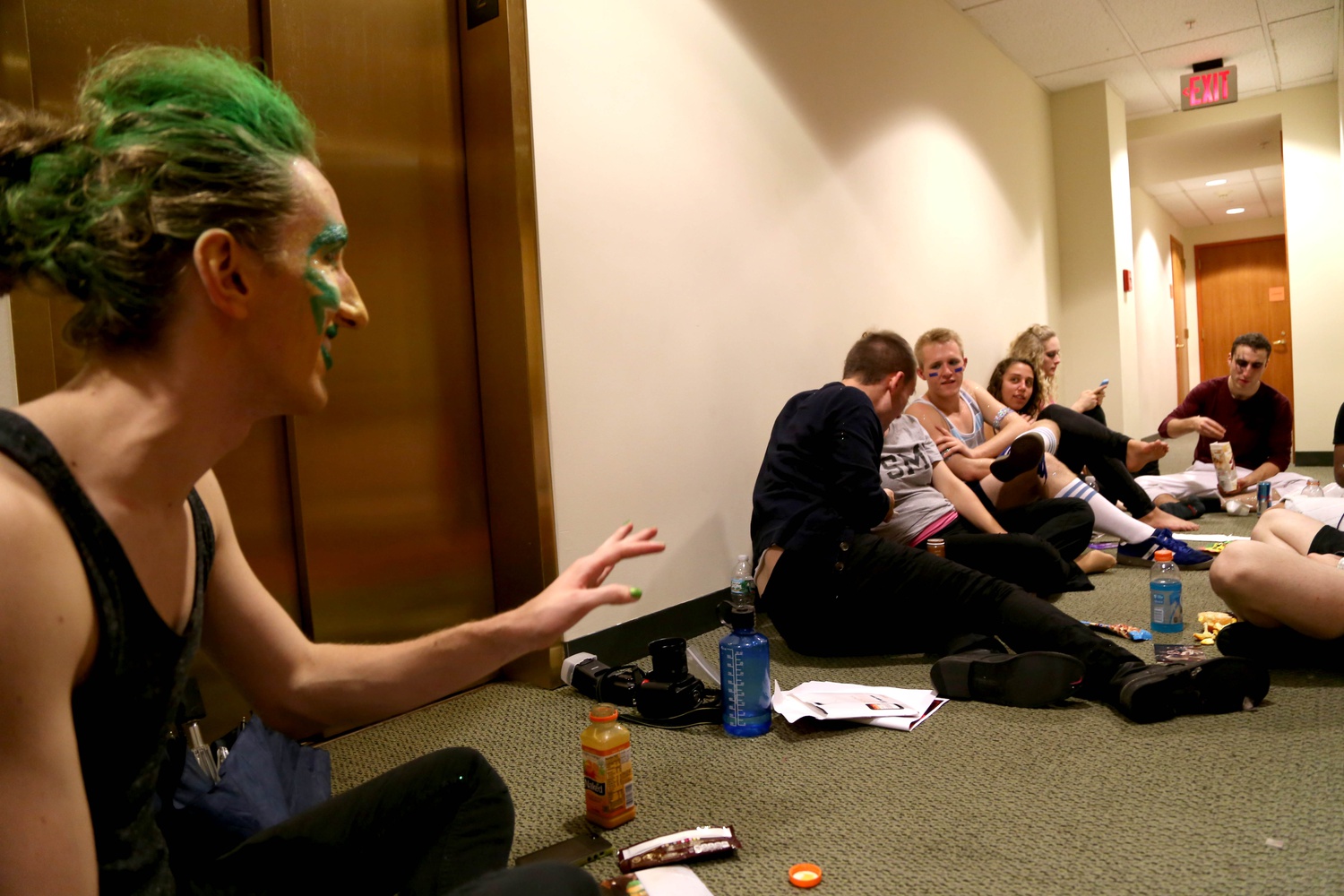 Between Shows - “I get to spend my Friday nights with my Harvard friends and Saturday night with my Donk friends. Or both.” 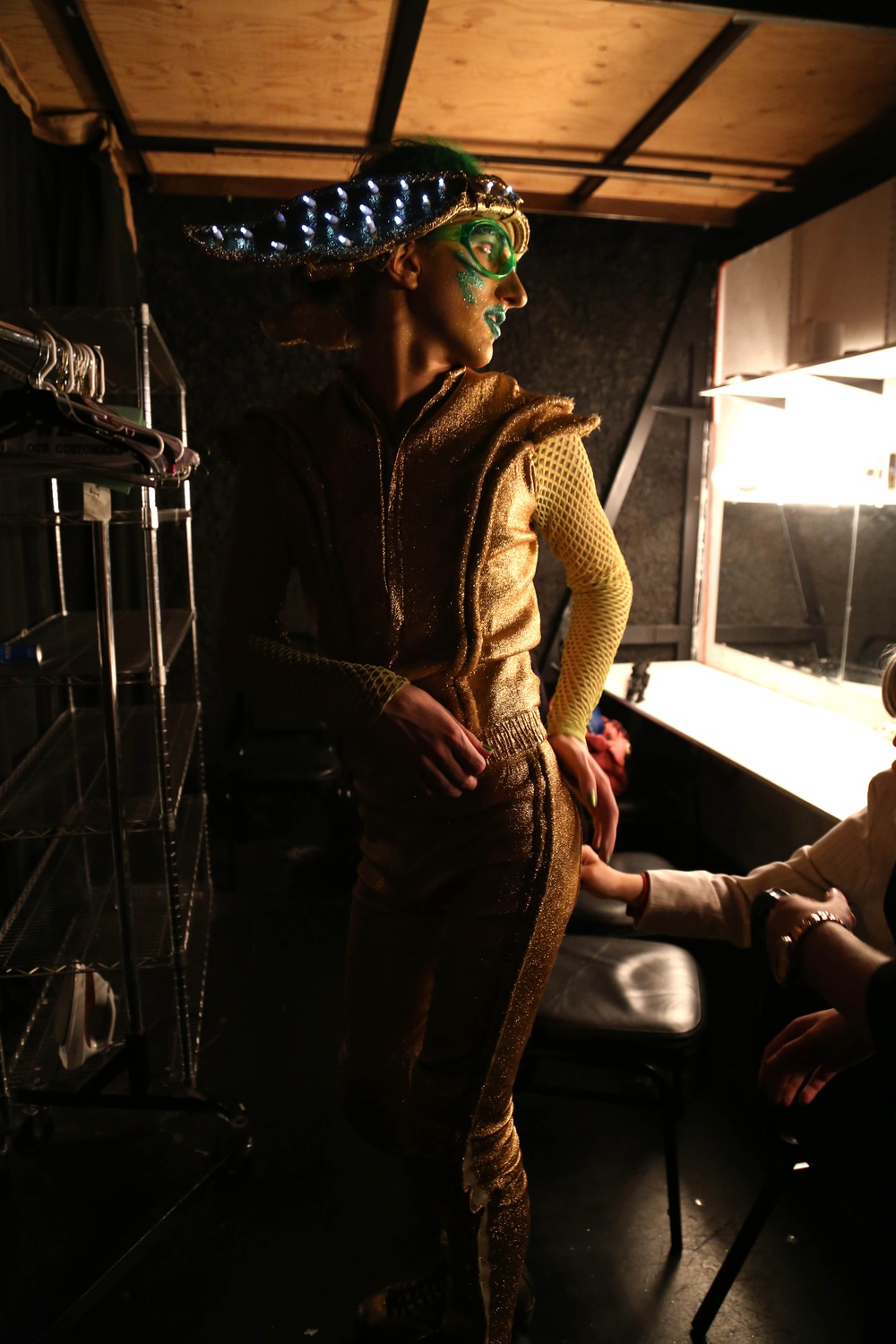 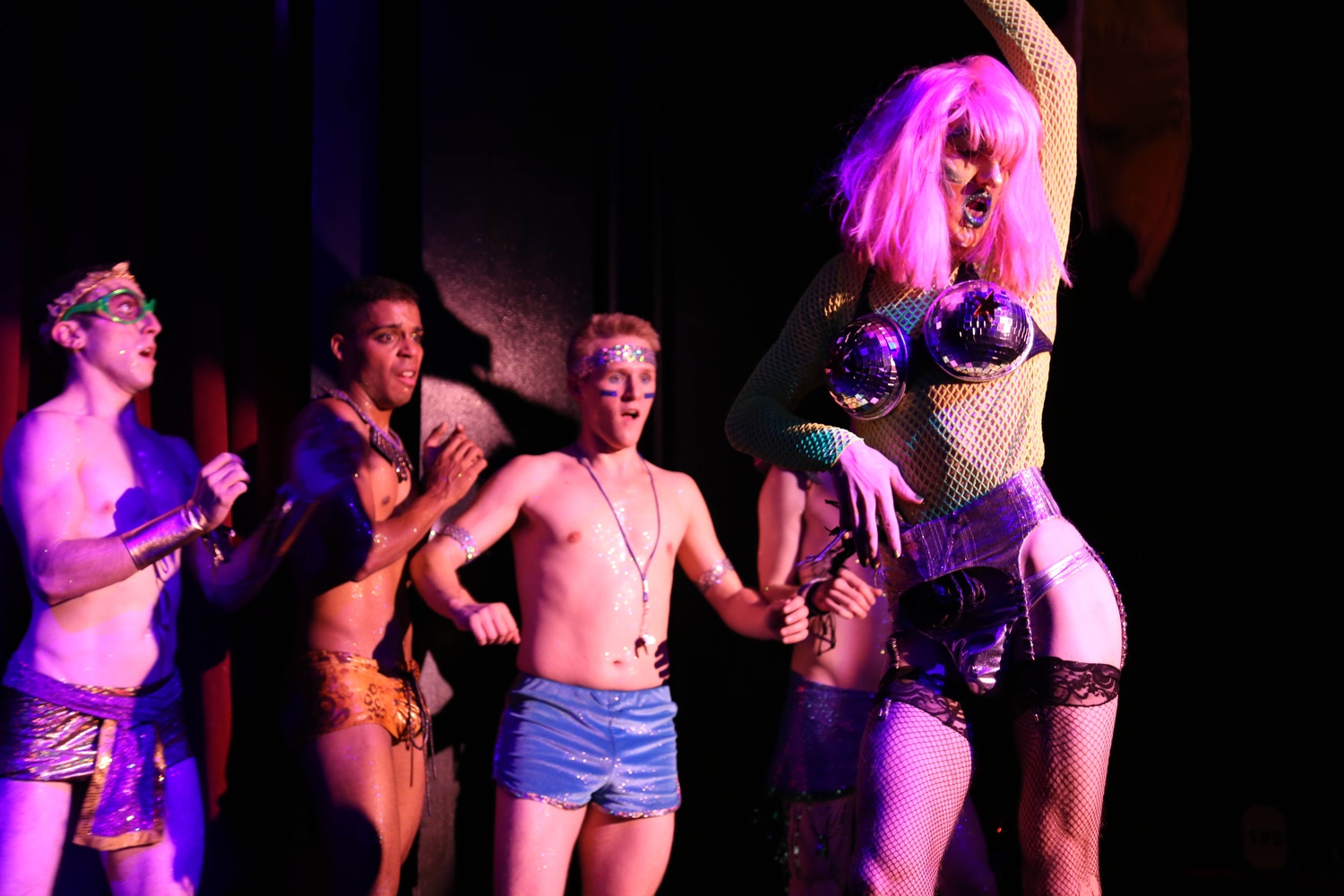 During the Show - "This is playtime." 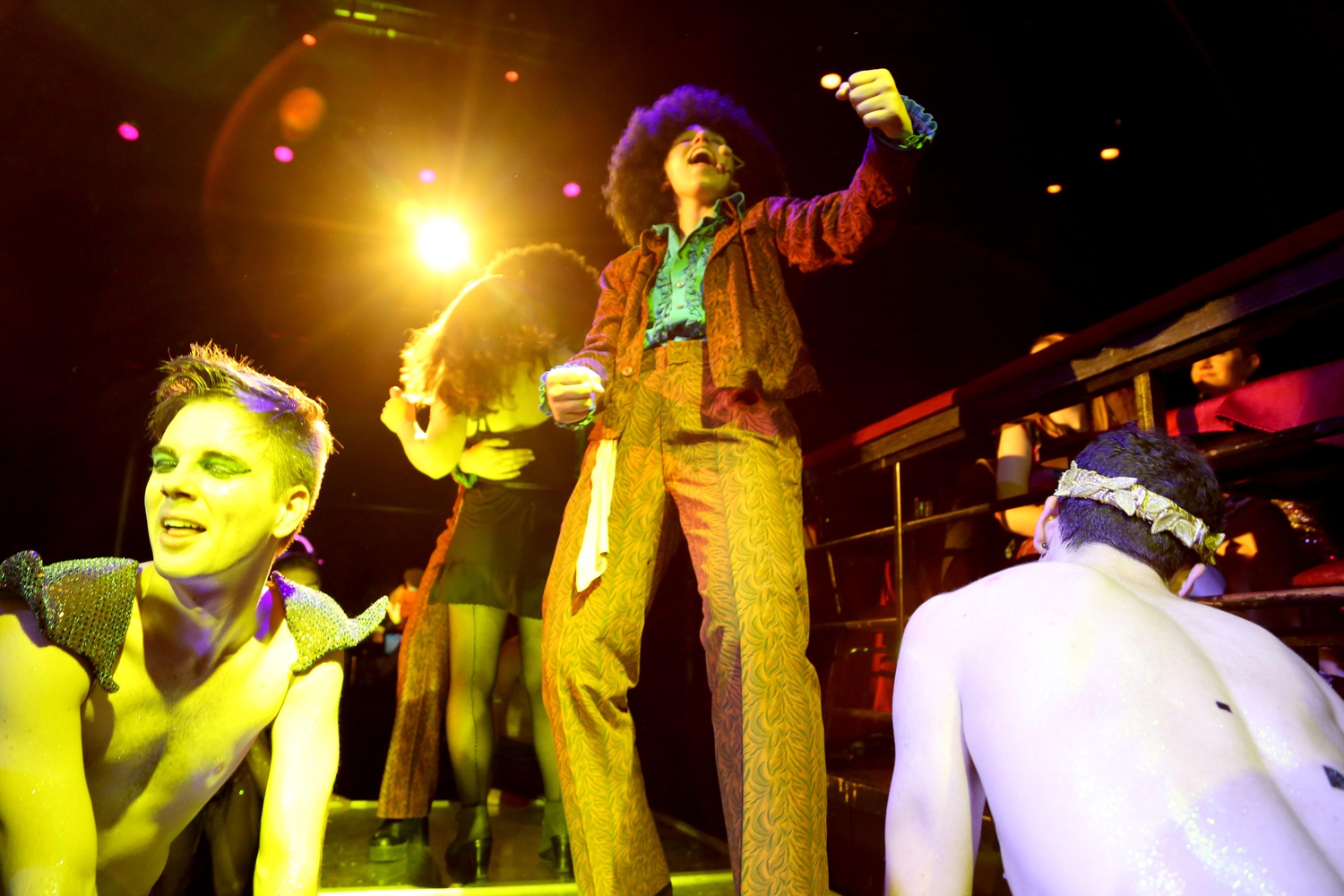 The Final Push - “It’s like getting shot out of a cannon. We’re going, going, going, and then the first show’s over.” Cast members parade around the club during the second performance of "The Donk." 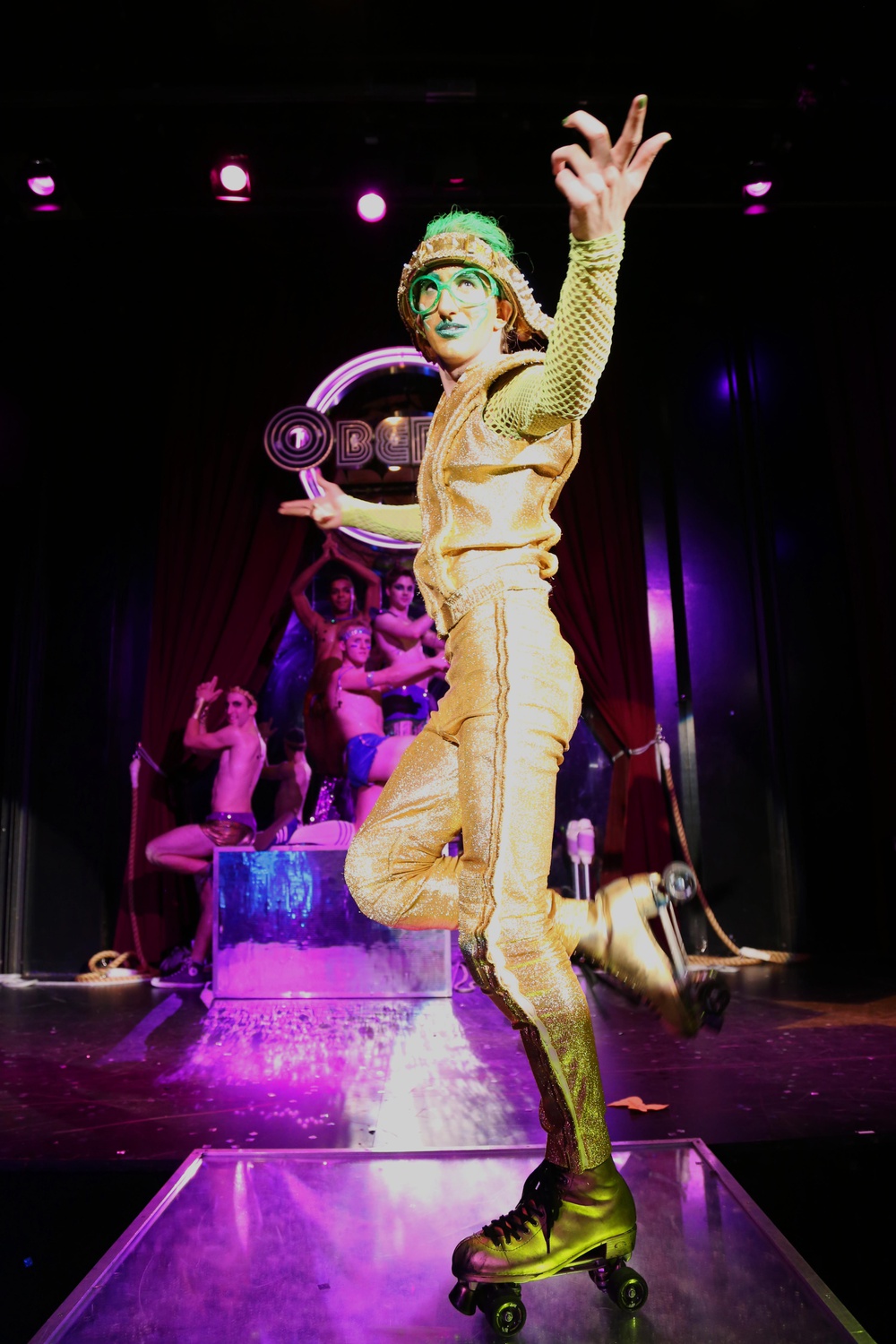 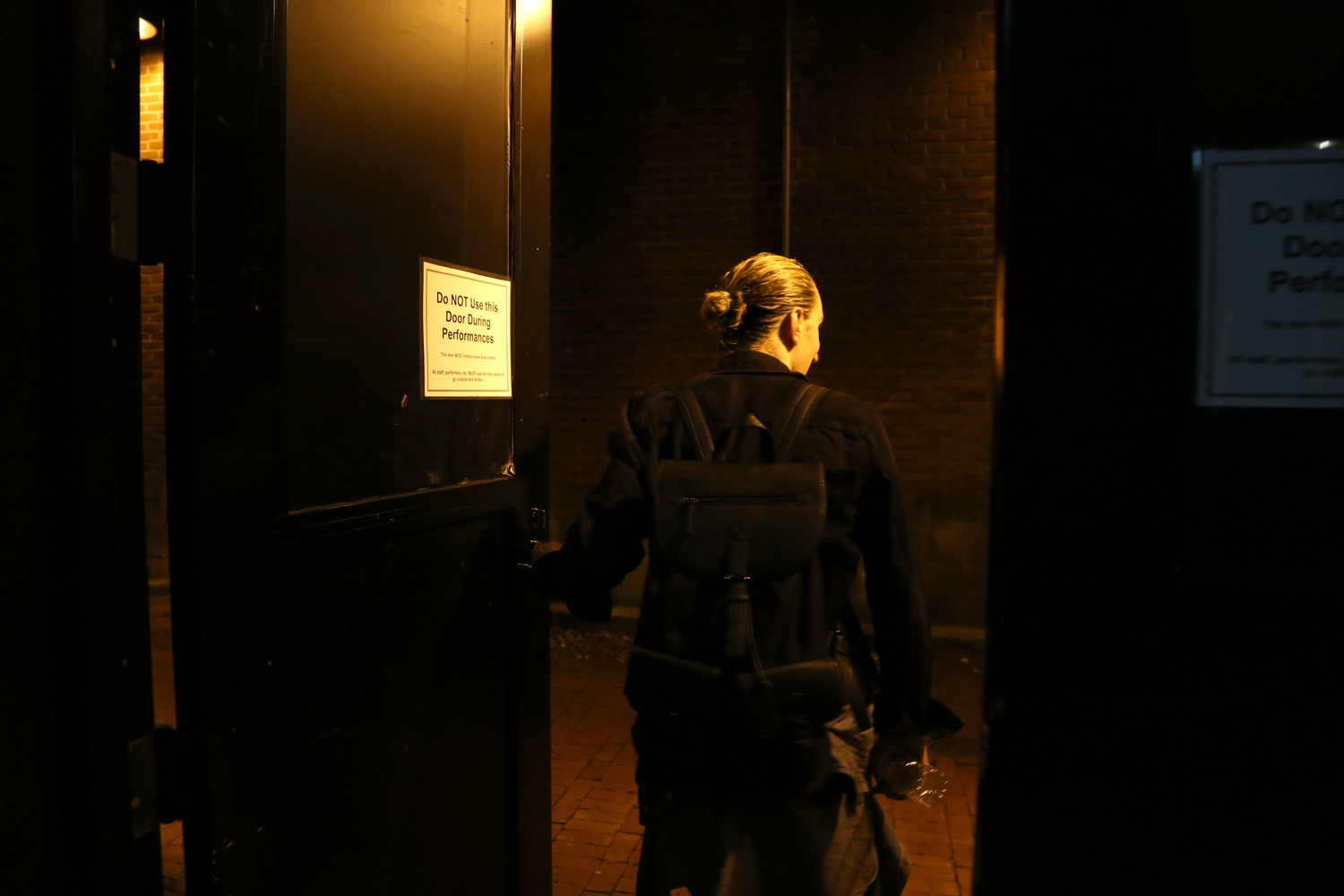 The Way Out - Mauriello leaves the Oberon to head home to Kirkland House. Along the way, he will run into his roommates and meet them for a late-night snack.
By Madeline R. Lear

It’s a typical Saturday night for Mauriello, one of the stars of Diane Paulus’s “The Donkey Show.” It starts at the American Repertory Theater’s Oberon stage and ends, like Saturday nights at Harvard often do, with a Felipe's run.

“The Donkey Show,” affectionately called “the Donk” by cast members, is one of Mauriello’s many projects.

“For me, every second of every day is theater. I’m always interested in the self that we present, how we dress, how we talk, who we are when we’re being interviewed. I love it all.”

Mauriello has crafted a special concentration in theater arts and performance.  He continues to produce, direct, and perform with the support of the Harvard-Radcliffe Dramatic Club. He wrote and staged his first original piece, “Julie Cooper: Genesis Prayer,” last year. Mauriello started at the A.R.T. his sophomore fall. Within the past two years, he has been a marketing intern, an understudy, and a performer.

“Theater is always what I’ve wanted,” says Mauriello animatedly, almost knocking over a water glass in the Kirkland dining hall. “It’s always what’s made my brain tick most excitedly. But being here has exploded everything, in a really astounding way.” “The Donkey Show” is Mauriello’s dream college job.“I make new best friends for the night. I wouldn’t want to be doing anything else. This is playtime.”

Playtime starts at 5:30 p.m., when Mauriello arrives at the Oberon to prepare for his transformation into the drug-addled Doctor Wheelgood. The show is set in a disco club adaptation of “A Midsummer Night’s Dream,” blending drag and the Bard to create a bedazzling 360-degree experience.

Mauriello and much of the cast show up early to hang out and dress (or in many cases, undress) in acid-infused disco outfits and glitter. Preparation can be a lengthy process for Mauriello. “It’s going to be beautiful,” he says in a dressing room backstage. “I feel like I’m on Dance Moms.” 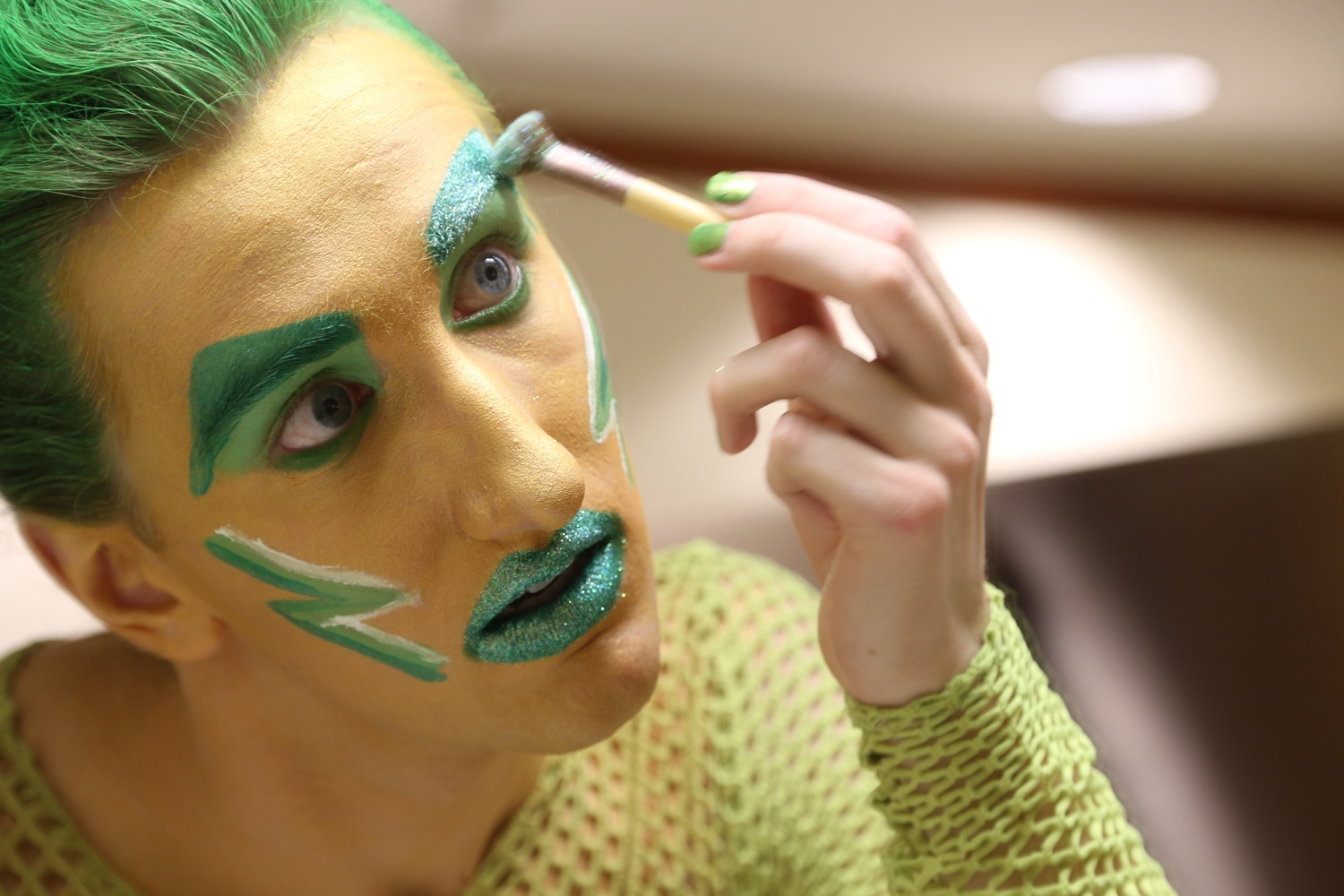 Dancers wearing only neon blue shorts and silver body paint slink by as they prepare for the show. A cast member wearing only butterfly pasties and pink shorts struts into the room, stopping to chat with Mauriello. He springs up, tells a joke, laughs, and paints a lightning bolt on his cheek all at once.

She’s just come down from “the glitter room.” Cast members use a converted bathroom to shower themselves in starry powder before going onstage. A stage manager says the cast has used more than 70 pounds of glitter since the show began five years ago.

The Oberon, a warehouse-cum-theater-cum-club, sits innocuously on the corner of Arrow St., and is the hip, younger sibling of the A.R.T.’s massive Loeb Drama Center on Brattle St. After getting ready, Mauriello rollerblades to the cast’s preshow huddle in the center of the space. Soon after, the disco music starts pulsing and the audience lines up at the door. The pre-show begins, the music keeps blaring, Mauriello and the cast do their thing.

The hallucinatory fluorescence and unique staging of the show take some getting used to, for both the cast and the audience. “The first half of the show, we teach the audience the rules. At some point it clicks, and they just get it,” says Mauriello after the audience has left, in a clear, quick voice. His character, Dr. Wheelgood, is completely mute for the duration of the two-hour spectacle, and Mauriello has been silent since the pre-show. “I can’t speak, but I can vocalize,” notes Mauriello of his character. “The drugs have really messed Dr. Wheelgood up.” 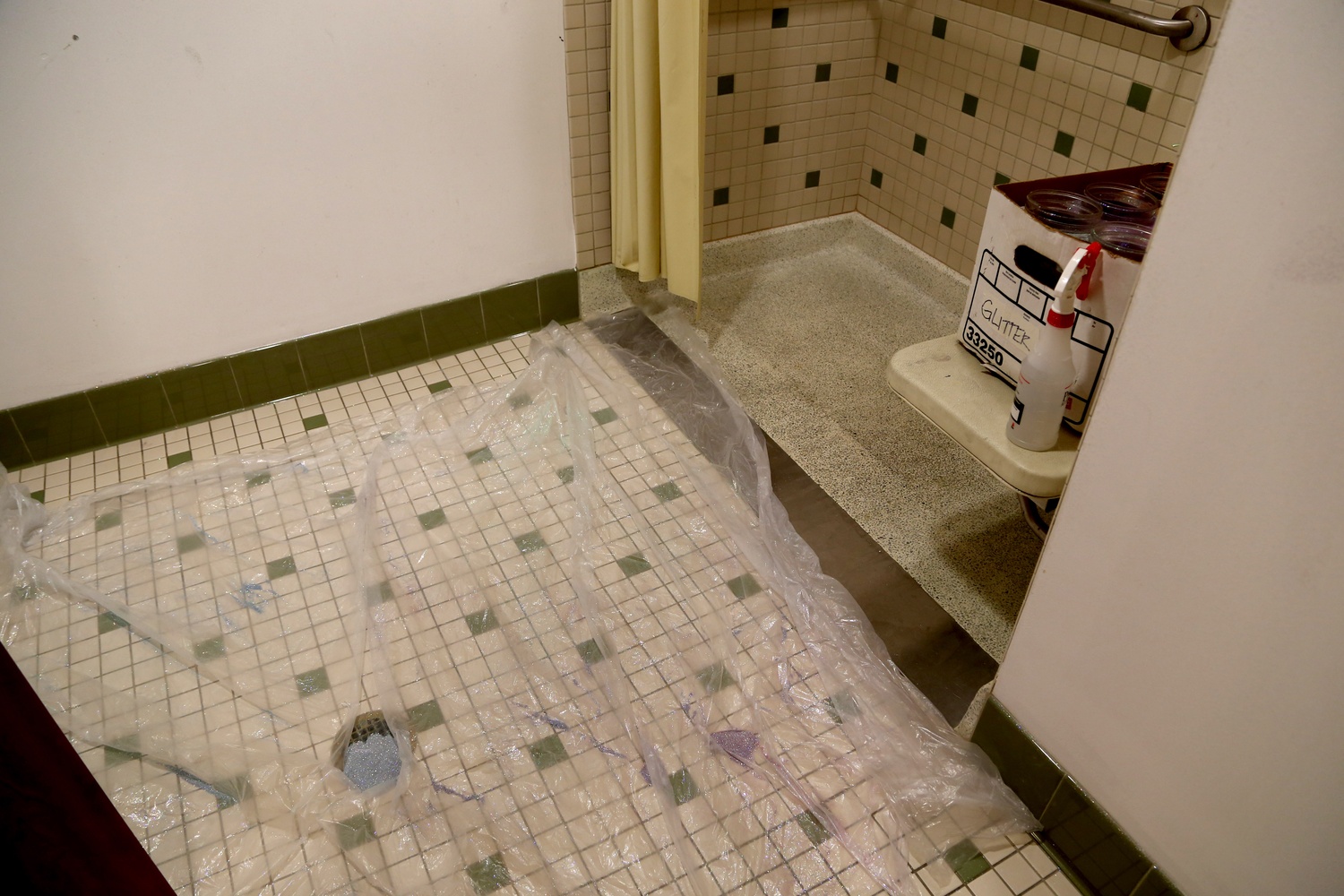 Castmembers stand on the plastic as they shower themselves with glitter inside the "Glitter Room" at the Oberon. By Madeline R. Lear

Before anyone can catch their breath, the 7:30 p.m. show is over. “It’s like getting shot out of a cannon. We’re going, going, going, and then the first show’s over,” says Mauriello.

He and the cast have a brief respite between the two shows. They run to the convenient store across the street to refuel, still in makeup. “We look like a gang of freaks making a pilgrimage. The first time I went in, the owner gave me a weird look. Now, it’s normal. No big deal,” says Mauriello. He pays for a juice and candy bar, his face gold and green and glittering.

The cast heads back and relaxes before they must go onstage again. They sit against a wall in between the glitter room, which shares a hallway above the performance space with a traditional Chinese medical practice and clerical offices for the Harvard Book Store. Mauriello’s academic advisor, Harvard Dance Director Jill Johnson, texts him between the 7:30 p.m. and 10:30 p.m. performances. “She’s always telling me to sleep, to eat. I need that reminder,” he says, chugging a juice and biting into a candy bar.

As the second show gets underway, the cast’s energy level hasn’t dropped a bit. I hear a sweaty swaying man behind me whisper to his female companion, “The guy in green is fabulous. It’s all fabulous.”

The music keeps running after the second show ends and the cast has left the stage. They return upstairs to shower and de-glitter. The audience keeps dancing, they themselves covered in glitter and smudged with body paint, a condition contracted while gyrating against members of the cast.
“They [the Oberon staff] let the audience stay in there for a while. If I’ve met cool people in there, I can go back in and mess with them out of costume,” says Mauriello, grinning and wide-awake even though he’s been at the Oberon for over seven hours. 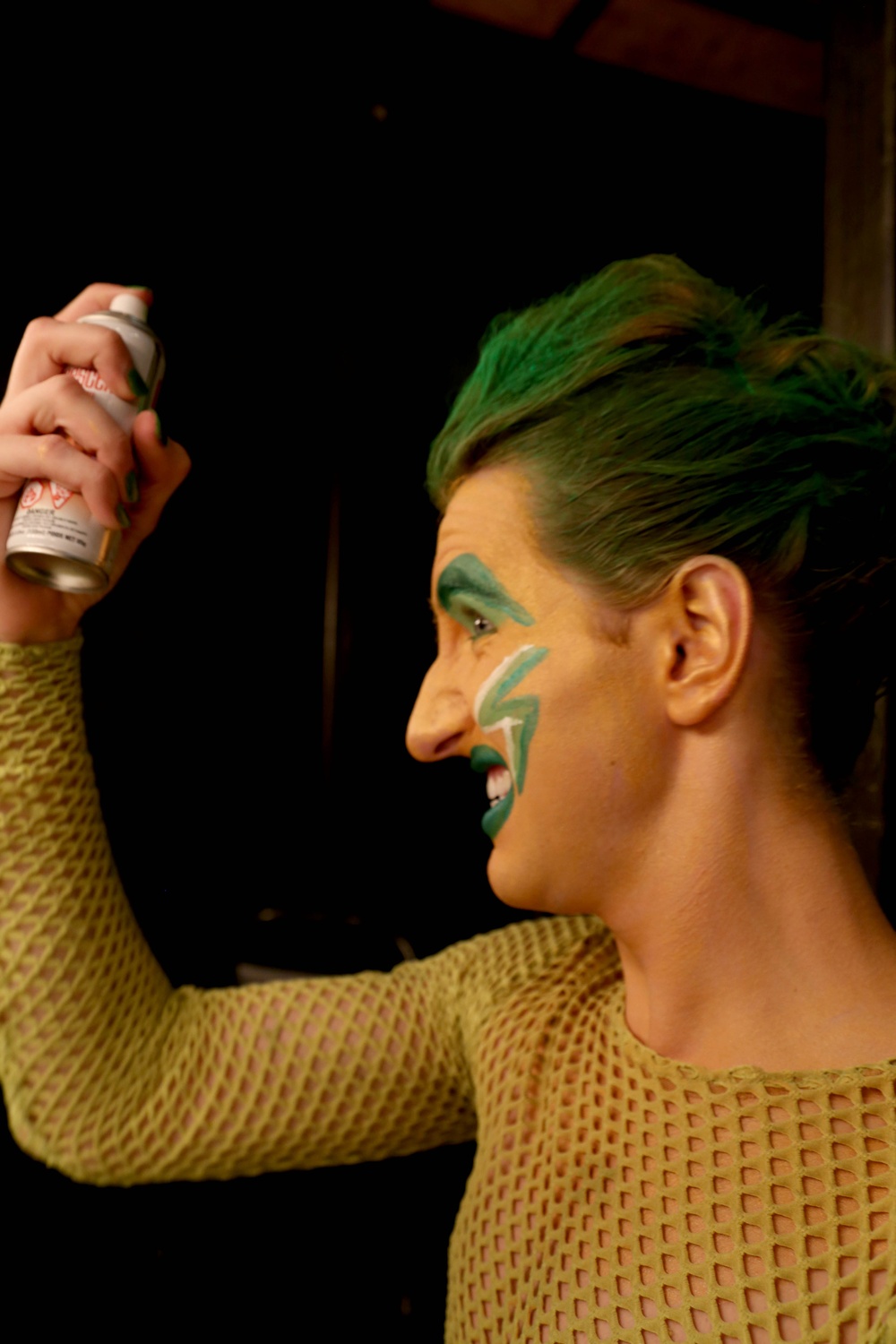 Mauriello slips out from the performer entrance into the October mist. On the walk back to Kirkland House, we run into roommates Gus A. Mayopoulos ’15, Samuel B. Clark ’15, and Andrew D. Talbot ’15. They’ve just come back from a night out, and make plans to go to Felipe’s with Mauriello after he drops his costume off in the room.

Just like that, Mauriello slips back into the now decidedly dull world of Harvard. “It’s amazing,” he says, strolling down Mt. Auburn Street. “I get to spend my Friday nights with my Harvard friends and Saturday night with my Donk friends. Or both.”

The trail of “The Donkey Show,” though, inevitably follows him home.

“There’s glitter in my bed, on our couch, in the shower. Everywhere. Even five days later, I’m still finding it in my hair. And then the next day, I’m back in the glitter at the Donkey Show all over again.”