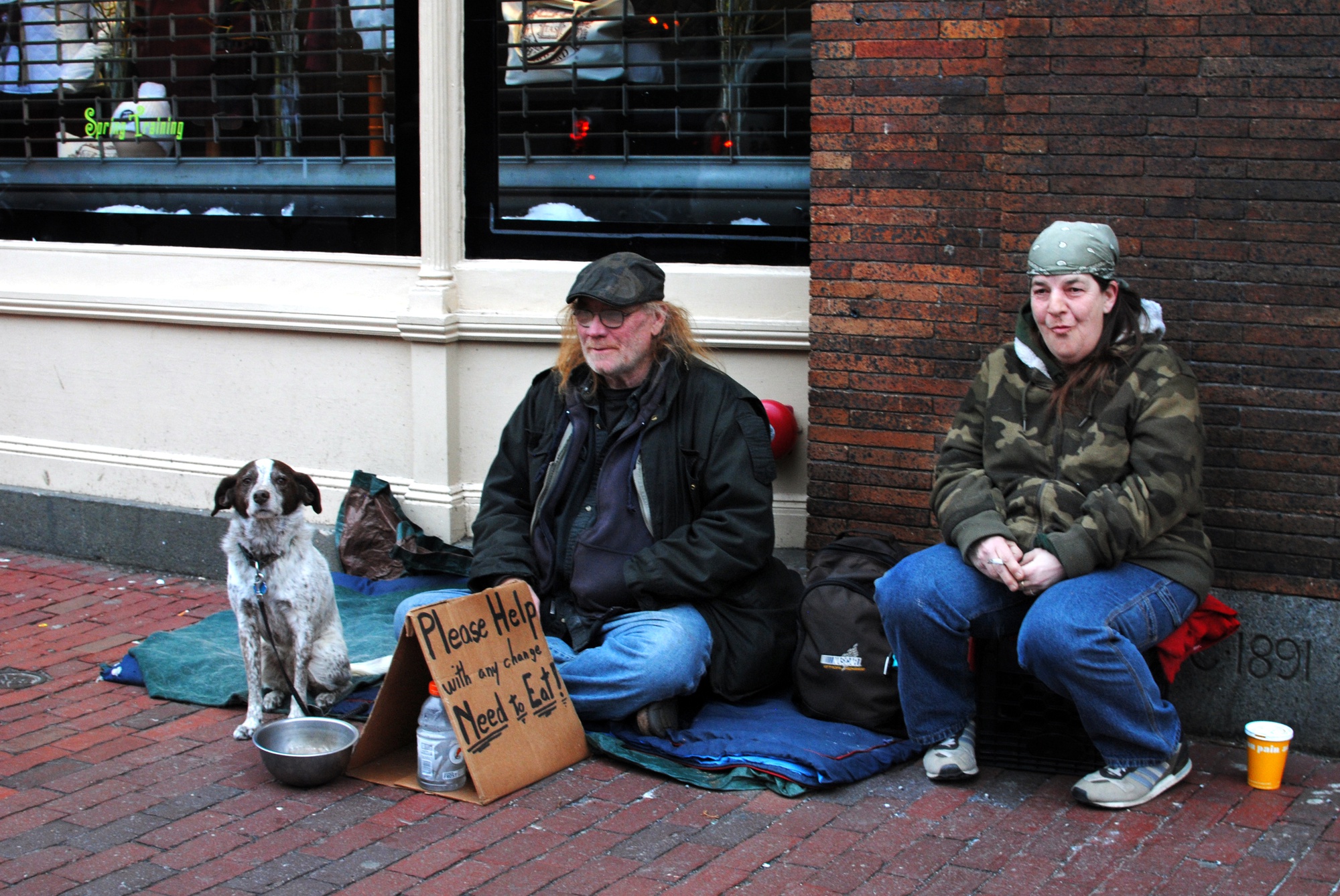 Ken, left, and Frenchie, right, ask for spare change with their dog Penny outside clothier J. August. Ken ran an outdoor book store on the sidewalk of Massachusetts Ave. for eight years before having to shut down in 2013.
By Sonali Y. Salgado and Caroline T. Zhang, Crimson Staff Writers 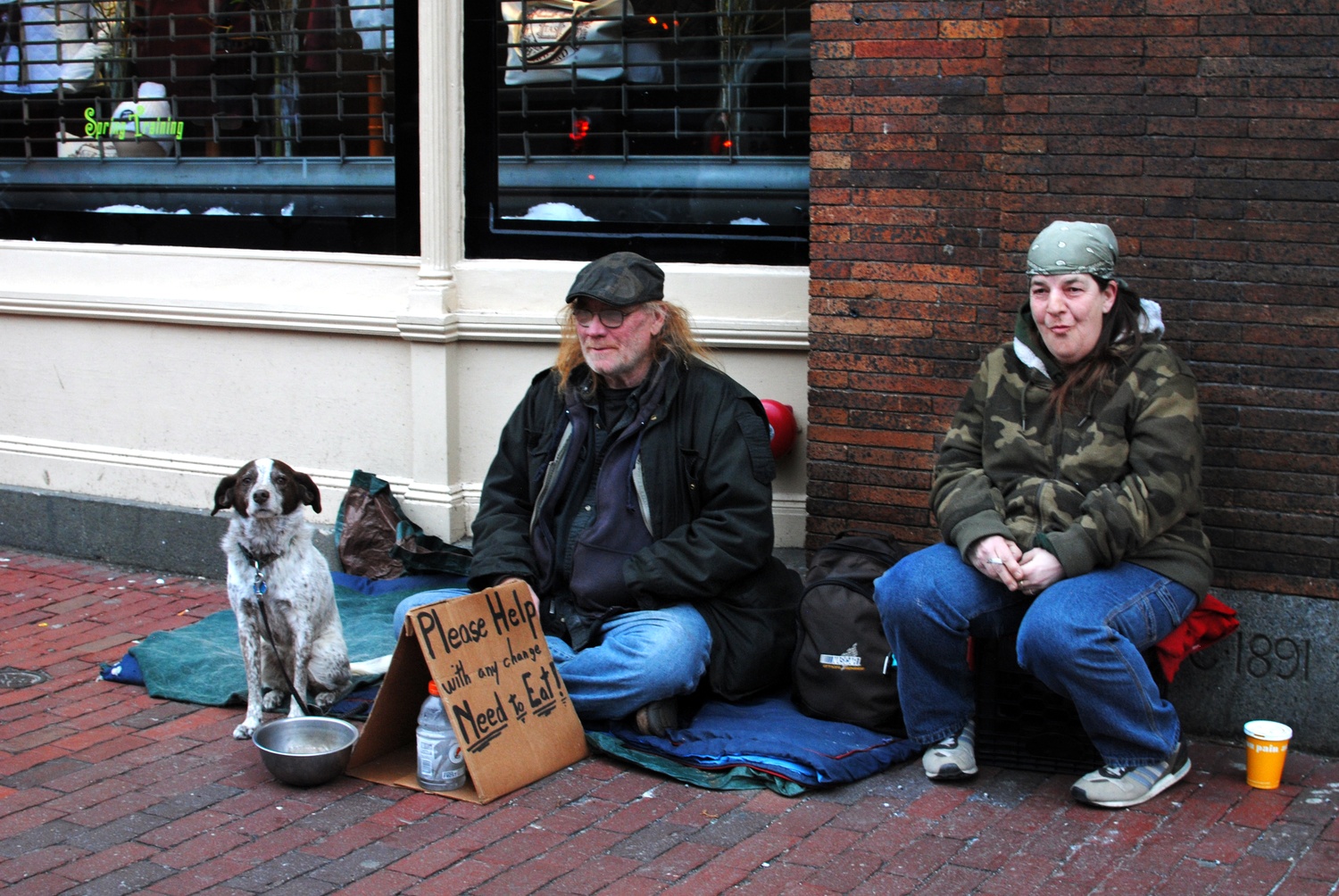 Ken, left, and Frenchie, right, ask for spare change with their dog Penny outside clothier J. August. Ken ran an outdoor book store on the sidewalk of Massachusetts Ave. for eight years before having to shut down in 2013. By Tiana A Abdulmassih

This is the third article in an occasional semester-long series on homelessness in Harvard Square. Read the first and second installments here and here.

At the heart of Harvard Square, between restaurants Au Bon Pain and Yenching, Lauren Canon holds a sign asking for food. On the ground beside her, Canon’s boyfriend Justin Newton has a sign that reads “too broke to pay attention.”

As they wait, a woman coming out of Yenching hands them a bag of Chinese food. They pull out a camping utensil and begin eating.

For Canon and Newton, one of the benefits of living in Harvard Square is the abundance of restaurants. Canon said that the relationships between the businesses and the resident homeless are generally more cordial than what she experienced in Detroit or Burlington, Vermont.

John P. DiGiovanni, president of the Harvard Square Business Association, characterized the relationship as “quite good.”

Most Harvard Square business owners, DiGiovanni said, accept homelessness as a part of the Square’s culture.

“We are not Disney World, where you have anything just perfect and neat and really not authentic,” said DiGiovanni, who owns several Square properties including the Garage.

According to HSBA executive director Denise A. Jillson, some Square business owners address the issue of homelessness through donations that are directed to the root causes behind homelessness.

The HSBA, which includes more than 440 members, has fundraised for Youth on Fire, a daytime drop-in center for homeless youth, and the Harvard Square Homeless Shelter. Some businesses also make individual food or financial donations.

Within this cordial relationship, however, store owners identified tensions, saying that the visible homeless population can detract from business and the shopping experience.

Anthony Allen, co-founder of Otto Pizza, said that the homeless who congregate outside his storefront have occasionally intimidated his customers and employees.

When asked if the homeless might have deterred customers from coming in, Allen said, “We have families coming up, and they’re often, you know, it’s just a lot of bad language, drinking, and smoking.”

Allen said that a few aggressive panhandlers have threatened his employees. In one incident, which he reported to Cambridge police, a panhandler demanded money from a worker and claimed that he had a knife.

Due to the incident, the store now has an overhead light in the back, a buzzer system that locks the back door, and more regular police patrols, Allen said.

Nonetheless, Allen identified the cases as rare and said that he has only called the police on a few occasions since Otto’s opening in 2011.

For business owners and the homeless, there is an unspoken agreement regarding panhandling at storefronts. Paul J. MacDonald, owner of Leavitt and Peirce, said that panhandlers usually sit between stores so that they do not block the display windows.

On a Sunday afternoon, Harley, a 19-year-old, self-described “gypsy,” was panhandling outside CVS Pharmacy on Mass Ave.

“I haven’t really moved since about 10 a.m. and they haven’t come outside to yell at me,” she said.

Harley said that CVS and other Square establishments were generally “okay” and said that she has only seen panhandlers be scolded by business owners for “something really wrong...like stealing.”

Davie, who prefers to be identified by his last name, usually spends the whole day outside of Harvard Book Store. In an interview in February with The Crimson, he said that he has a good relationship with the store owner and the staff.

“I keep the place tidy when I leave,” he said. “It wouldn’t look like I was here at all.”