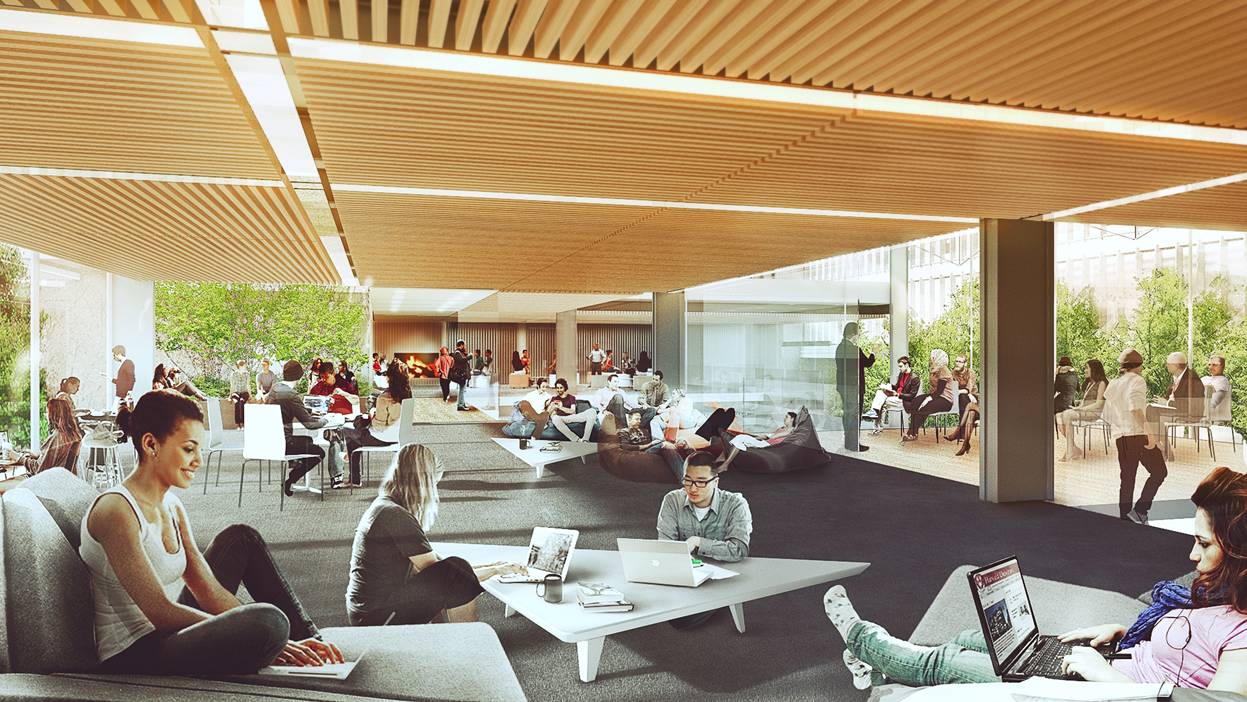 A rendering of preliminary plans for the second floor of the Smith Campus Center highlights common spaces, trees, and a fireplace. By Courtesy of Hopkins Architects
By Theodore R. Delwiche and Noah J. Delwiche, Crimson Staff Writers

The renovation of the Smith Campus Center will span three floors and feature a network of meeting rooms, common spaces, lockers, and express elevators when it opens in 2018, according to preliminary plans for the upcoming renovation.

While officials have detailed plans to host student government offices and fireplaces in the space and move several University offices to other locations to make room for the construction, the fate of several restaurants currently housed in the campus center building, formerly known as the Holyoke Center, still remains unclear.

The first, second, and 10th floors of the campus center building at 1350 Massachusetts Ave. will undergo construction as part of the project, according to Tanya Iatridis, the senior director of University planning who oversees the renovation. All proposed renovations must be approved by the city and the Cambridge Historical Commission, she said, meaning that plans are subject to change.

Officials hope the new campus center will be open at all hours, Iatridis said.

The campus center building’s renovation, announced in 2013, is slated to begin in the spring of 2016 and conclude in 2018, according to Iatridis. As part of the initial work into the building’s designs, the University prepared a survey and convened multiple working groups to discuss the renovation last year. Some of those groups were composed of mostly administrators and faculty while others were made up predominantly of undergraduate or graduate students.

Since that time, more than a dozen students who participated in initial working groups were invited to presentations, at least as early as November, that featured the floor plans and renditions of the renovated campus center, according to several attendees.

OUT WITH THE OLD

According to the preliminary plans, which Iatridis detailed in an interview, the campus center’s first floor will feature several restaurants and a large presentation area. Both the front plaza and back entrance will be redesigned and feature new landscaping.

The building will include lockers, which Iatridis said was a specific request of undergraduates who live in the Quad and students at Harvard’s campuses in Longwood. Details about the location and availability of the lockers have not yet been decided, according to Brigid O'Rourke, a spokesperson for University planning and community programs.

The second floor, meanwhile, will house lounge spaces, smaller meeting areas, and fireplaces, according to Iatridis. The space will also include separate offices for the Undergraduate Council and the Graduate Student Government, Iatridis said, and there are plans to transform an old bank vault on the second floor into a smaller meeting space for the organizations. A separate, larger space with a capacity of about 200 people could be used for meetings by the entire graduate and undergraduate student governments, she said.

Unused elevators near the campus center’s arcade area on the first floor will be converted to express elevators to lead Harvard affiliates directly to the building’s 10th floor, facing the river, according to Iatridis.

There, there will be lounge areas, conference rooms, and fireplaces, according to former UC President Gus A. Mayopoulos ’15, who saw preliminary plans for the project twice in November and sat on the common spaces working group that discussed the project.

Some areas of the renovated campus center will be off-limits to tourists, according to Mayopoulos and former UC representative Charles A. Scherr ’17, who viewed preliminary plans in November. The first floor and portions of the second floor will be open to the public, but only Harvard affiliates will have access to the 10th floor, O'Rourke wrote in an email.

Another feature of the space will include vitrines, or glass cases, to encase trees that Iatridis said will react to the changes in the seasons just as plants outside the building do.

“The challenge was to create spaces that are very, very flexible so the spaces can take a life of their own during the daytime, during the weekend, during the seasons,” Iatridis said, adding that another large focus of the proposed designs was to increase natural sunlight.

Officials have already made plans to relocate current University tenants of the campus center’s first, second, and 10th floors, according to O'Rourke.

The Harvard Box Office, meanwhile, will relocate from the campus center’s first floor to its eighth, according to O’Rourke, while the Office for Sponsored Programs will move from the sixth floor to 1033 Massachusetts Ave. Officials have yet to finalize a space for Harvard Real Estate offices, which are currently situated on the eighth floor, O'Rourke wrote.

The fate of restaurants that currently reside in the campus center building, such as Al’s Harvard Square Cafe and Oggi Gourmet Foods, is unclear. Iatridis said she expects the renovated Smith Center to include the same number of food options as it does now, if not more, but said she does not know which restaurants will ultimately stay there because she has not been involved in real estate negotiations with the shops, which each have their own leases.

Campus Services has been in contact with individual businesses regarding their leases, but “no final decisions have been made,” according to an emailed statement from Carolee Hill, the managing director of Harvard Real Estate. Hill declined to comment on the status of individual retail leases, citing the confidentiality of the agreements.

More than a month ago, the popular dessert shop Finale closed its location in the campus center building after 12 years of operation for reasons that one general manager for the company said she believed were related to the planned Smith Center renovations. Iatridis said she did not know the reason for the closing.

In particular, the future of Au Bon Pain, a restaurant that is currently situated on the right facade of the Smith Center, is uncertain. Several students—UC representative Samarth Gupta ’18, Scherr, Mayopoulos, and Sudipta Devanath, a Law School student and the current president of the GSG—said they saw renditions of the plans that included changes to the restaurant’s current outdoor seating area. Devanath and Mayopoulos said they did not know whether ABP will be included in the renovated campus center.

O'Rourke declined to comment further on the status of ABP.

The preliminary plans for the campus center are the result of more than a year of planning. While several students sat on the working groups that advised the changes, administrators have come under some criticism for soliciting what some undergraduates have called an unsatisfactory amount of student input.

Iatridis, for her part, refuted that perception in an interview. “To come under that kind of criticism...just amazes me because the students have been right there, and actually most of the design is a response to what people have said,” she said.

Iatridis said she will hold open houses on Jan. 26, 27, and 30 on the campus center’s second floor to show off the sketches to Harvard affiliates and go over the current architecture of the building.