As Governor Declares State of Emergency, University Braces for Storm 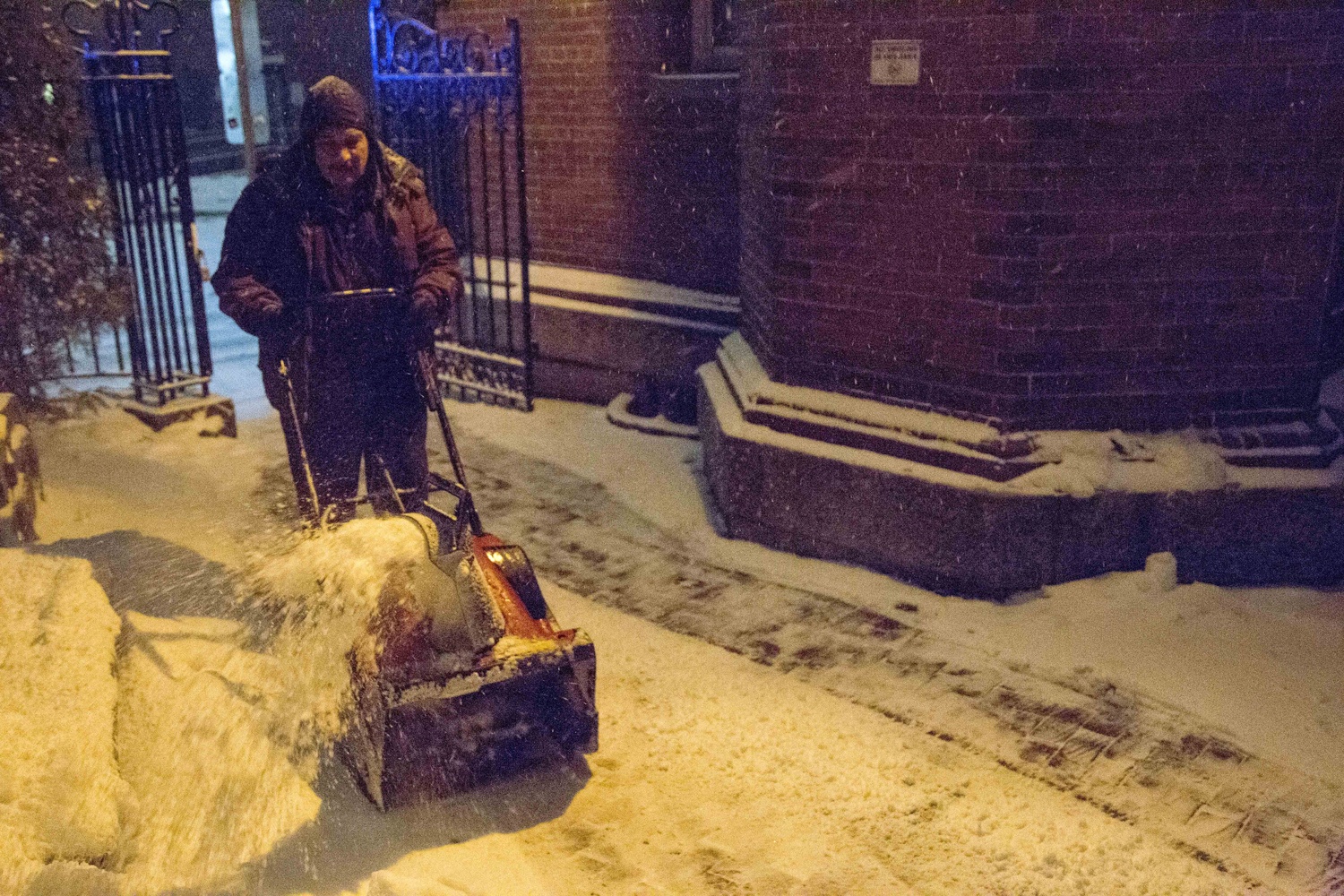 Harvard will suspend all operations Tuesday for non-critical personnel in anticipation of a looming blizzard that may bring more than two feet of snow to the Boston area.

As snow began to fall Monday in advance of a storm that the National Weather Service has called “crippling and potentially historic,” individual schools geared up to close. The Faculty of Arts and Sciences has canceled all Tuesday courses and sections, according to an emergency email communication sent to FAS affiliates early Monday afternoon. Harvard Extension School canceled classes Monday night and Tuesday. Graduate schools, including Harvard Law School, the Graduate School of Design, and the Graduate School of Education, also canceled classes.

Dean of Undergraduate Education Jay M. Harris told undergraduates in an email that the College’s deadline for submitting course study cards on Friday will not change in light of the blizzard, which interrupts course shopping week. Harris instructed students concerned about meeting the deadline to contact the deans in their Houses or freshman yards.

In advance of the storm, the weather service issued a blizzard warning from 7 p.m. Monday to 1 a.m. Wednesday, cautioning that travel would be “impossible and life threatening” during this time. In Massachusetts on Monday, Governor Charles D. Baker ’79 declared a state of emergency for the state, banning all non-essential motor vehicle travel, effective at midnight. The MBTA will also be closed Tuesday.

At Harvard, FAS Libraries, including Widener and Lamont, will close at 10 p.m. Monday, the first day of the spring term, and stay closed Tuesday, and Harvard University Health Services has canceled regular Tuesday appointments but will remain open for urgent care, according to an email to undergraduates from Dean of Student Life Stephen Lassonde. University transit and fleet services will operate fully until 12 a.m. Tuesday, according to Carl A. Tempesta, associate director of transit, fleet, and charter services. Transit staff will “[assess] the storm as well as the conditions of the streets” and “will pull the vehicles” once streets become unsafe, he said.

Dining halls, meanwhile, will function at normal hours Tuesday, although menus will be modified slightly, with no grill options at lunch and dinner, altered entrees, and extra soups, according to Harvard University Dining Services spokesperson Crista Martin. Martin wrote in an email that Harvard will house HUDS staff and managers on or near campus Monday evening and that dining halls will feed grounds staff who clear snow.

The impending storm spurred a number of event cancellations on campus and in Boston. Memorial Church canceled its mornings prayer services for Tuesday and Wednesday, and two exhibitions of plans for the Smith Campus Center, scheduled for Monday and Tuesday, will now occur next week.

Declaring a snow emergency, the City of Cambridge enacted a parking ban at 4 p.m. Boston’s Logan Airport will cancel domestic flights as early as 7:30 p.m., according to The Boston Globe, and Boston Public Schools will close Tuesday and Wednesday.

Historically, Harvard has only closed for a select few major weather events. In 1977, former Dean of Students Archie C. Epps III joked that, “Harvard University will close only for an act of God, such as the end of the world,” although the University closed for the blizzard of 1978. More recently, 2012’s Hurricane Sandy and 2013’s winter storm “Nemo” prompted the University to close.

Monday, as administrators busily prepared for the University’s upcoming closure and Massachusetts’s state of emergency, undergraduates readied plans for snowball fights across campus.

—Staff writer Karl M. Aspelund contributed to the reporting of this story.