Plans for the science complex include classrooms, labs, lounge spaces, an exhibition space, a cafeteria, and 250 parking spots. By Courtesy of Behnisch Architekten
By Ignacio Sabate, Crimson Staff Writer

The complex will house classrooms, labs, lounge spaces, an exhibition space, a cafeteria, and 250 parking spots. A central tenet of the design of the building will be its atrium, a large open space within the building that will span the six floors from the basement level.

According to Robert Matthew Noblett—a representative and architect from Behnisch Architekten, the architecture firm responsible for the building—the building will rise to about 130 feet and span 586,000 square feet.

Noblett said a goal of the project is to make the first two floors of the building accessible to the general public. In the past, Allston residents have raised concerns over the public accessibility of Harvard-owned buildings. The front of the building located on Western Avenue will have a tall, frontal facade, while the rear of the building will face a large landscaped lawn that will stay open to the public. 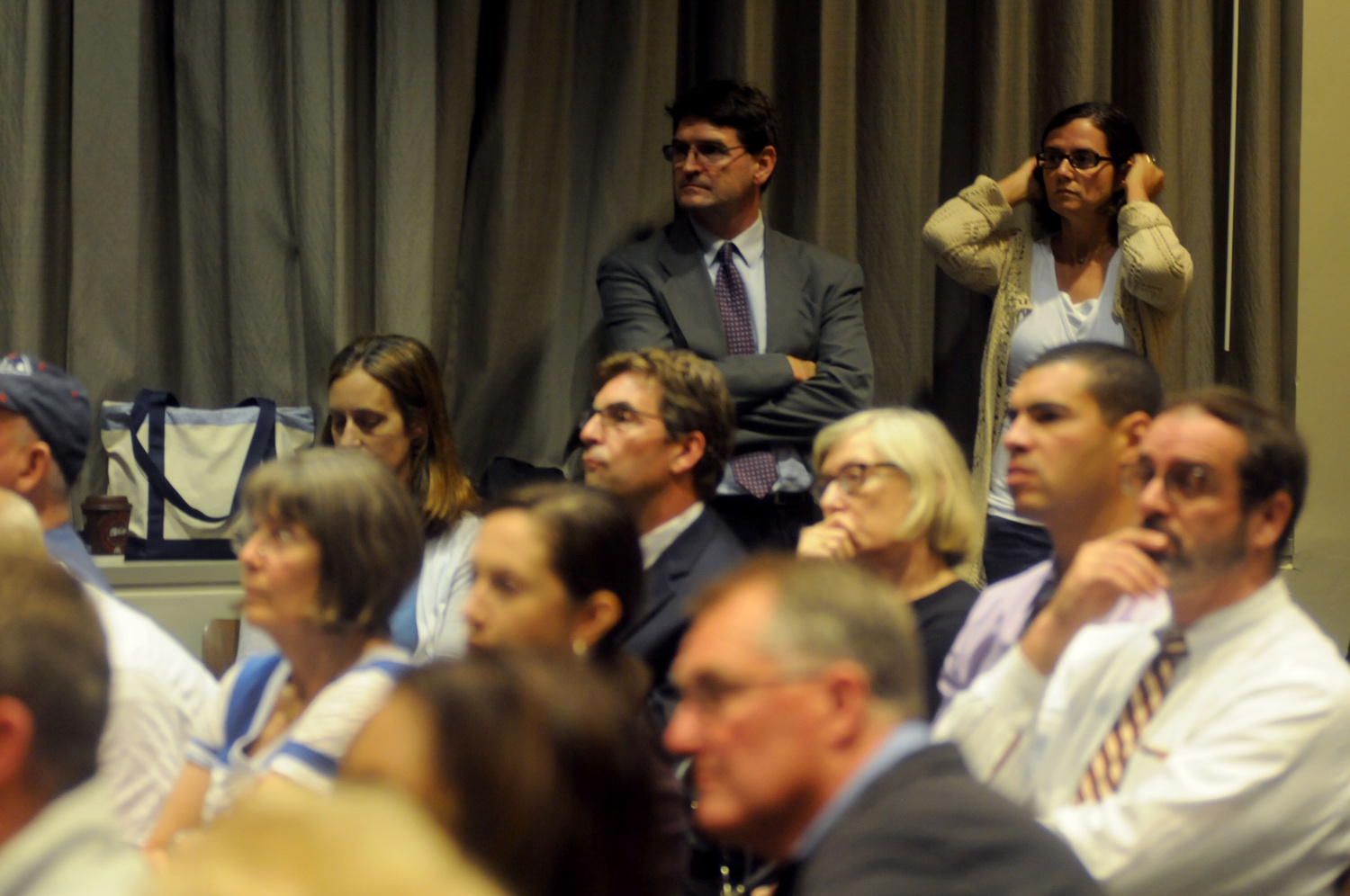 Members of the public watch as the Harvard-Allston Task Force presents progress on Harvard buildings in Allston. University staff and contractors presented blueprints for the new School of Engineering and Applied Sciences complex. By Suproteem K. Sarkar

Behnisch Architekten also penned the design for Harvard’s original science complex, which was planned in 2007. After construction took off in 2008, it stalled in the wake of the financial crisis, and Harvard officials said in 2012 that it would revive plans for a science complex in Allston after years of discussions with residents and development officials from the City of Boston. University President Drew G. Faust named the construction a priority in Harvard’s ongoing $6.5 billion capital campaign.

“We were pleased to be contacted by Harvard again,” Noblett said. “This is still very much a design in progress, and not all the details are set in stone.”

Gerald Autler, senior project manager at the Boston Redevelopment Authority, said the project’s “context has changed significantly” since the original plans. The purpose of the building has shifted from graduate research to undergraduate research and learning, and more generally, Autler said Harvard has grown increasingly conscious of Allston resident interests since 2007.

One of the plan’s notable features is a skin that will wrap around the facades of the building’s upper four stories and reflect sunlight during the summer and let light in during the winter. According to Noblett, planners are still conducting research on the skin’s technology and have not yet decided what material will comprise it.

The building will also include a water drainage system to store and recycle water for future use, as well as a system that will reflect light from south side of the building to create grade-level flood lighting on the north sidewalk, according to the plans. According to Autler, the southernmost end of the property will be landscaped, but remain open for potential future developments.

Kevin Casey, Harvard’s associate vice president for public affairs and communications, said University officials plan to file a proposal in the first week of November. Before then, residents will discuss the plans at two Harvard-Allston Task Force meetings.

Despite the rain, at least 60 local residents and Harvard and BRA affiliates attended the meeting, when officials presented the plans.

That level of attendance stands in contrast to the low numbers at previous task force meetings, which Autler acknowledged Wednesday. “We’ve had some attrition in the task force members, so it’s my goal to get back to a more complete representation of the neighborhood,” he said.

“Whoever is thinking about giving this presentation should think about framing it as how these topics directly affect our neighborhood; that’s where neighborhood concerns are,” task force member Bruce E. Houghton said.