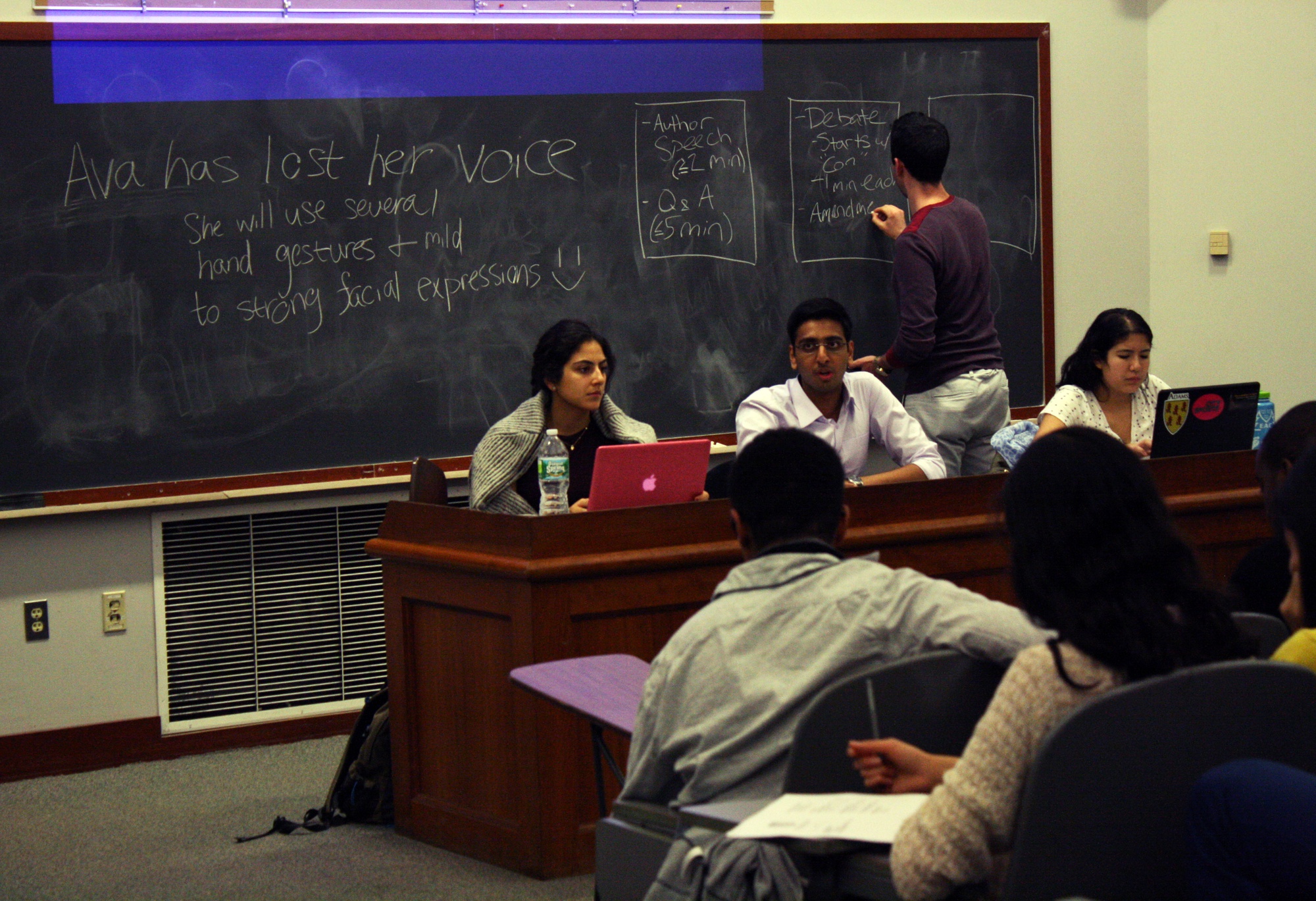 After almost an hour of debate, Undergraduate Council representatives voted 31 on Sunday to 11 to push a referendum asking students if the Pusey Library should “be transformed into a freshmen-oriented social space” to this month’s presidential election ballot.

The referendum’s supporters argued that the library’s location in the center of Harvard Yard could prove effective in transforming it into a safe and inclusive environment geared toward freshmen, a group representatives said lacks adequate social space. 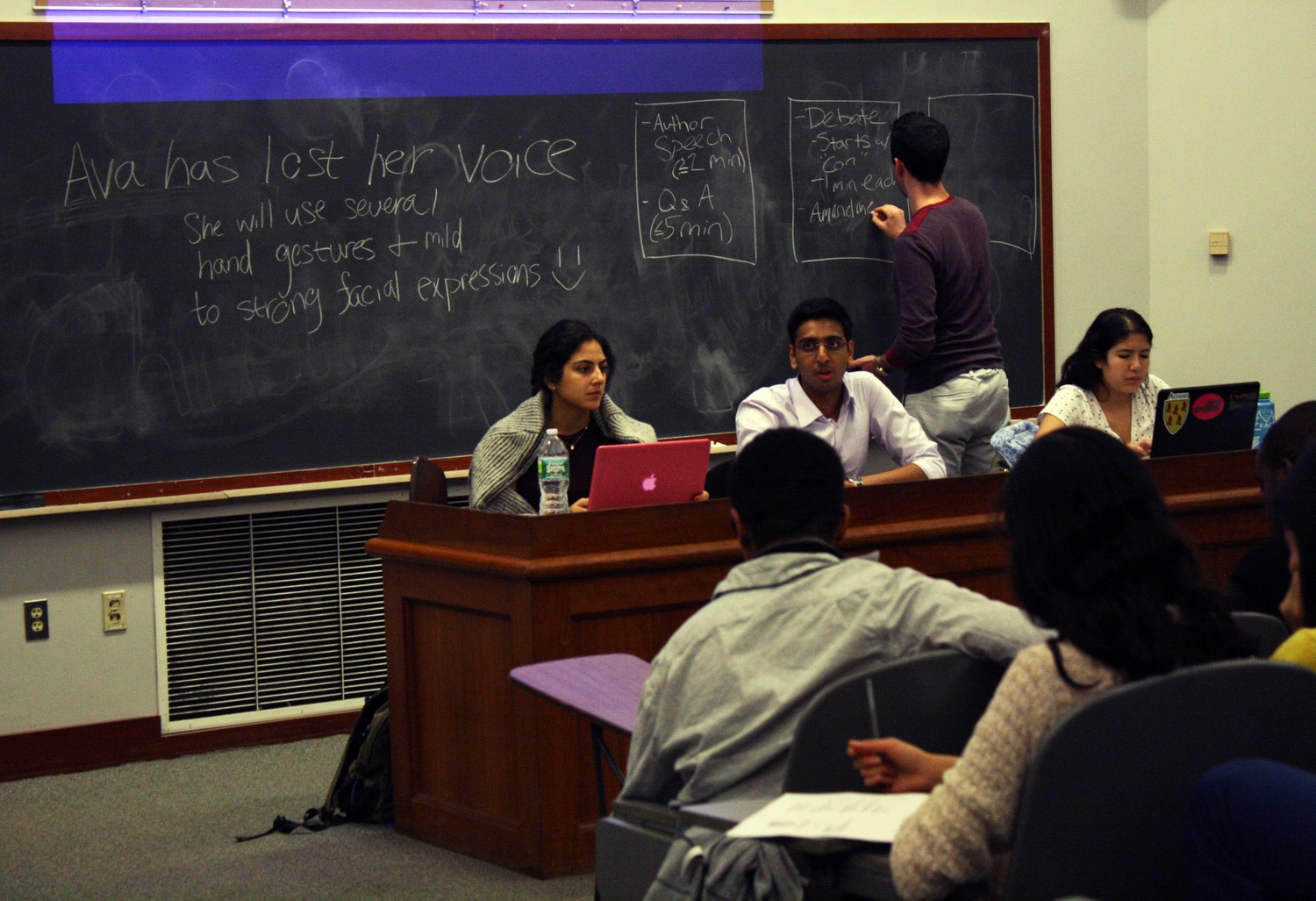 At its general session, the Harvard Undergraduate Council discusses a meeting held with University President Drew G. Faust this past week. By Michelle M. Ng

Still, the legislation proposing the referendum provoked heavy debate and some criticism from the Council, which last year voted down a proposal to fast-track a referendum on course section sizes to the ballot.

Some representatives argued that the proposal sounded like a “crazy idea” and that advocates would likely need to draw up a detailed plan before enacting any plans. Student Life Committee Chair Oliver W. Kim ’16 said the proposal would likely be infeasible; he underwent an unsuccessful campaign in previous years to turn portions of the Pusey Library into a student nap space.

But despite the debate, the UC ultimately secured the referendum a place on the November ballot after members discussed tweaking it. Eliot House Representative David P. Frankle ’18 proposed an amendment to the legislation to phrase the referendum in a way that would show no bias towards students’ class years to then appeal to more students.

The amendment to eliminate wording appealing to freshmen ultimately failed with a vote of 10 for the amendment, 24 against, and eight abstaining. Representatives against the amendment argued that freshmen in particular suffer from a lack of common and social space on campus.

“I think if we’re actually going to talk about social spaces at Harvard, we need to call the issues like they are,” Student Initiatives Committee Co-Chair Daniel V. Banks ’17 said. “If we’re going to address social life, we need to talk about the fact that freshmen have no ownership over spaces on campus.”

With Sunday’s successful vote, the library issue joins three other referenda on the ballot for the UC’s presidential election, which will take place later this month. One referendum calls on Harvard administrators to add a provision to the student handbook banning students from joining male final clubs; another advocates for increased levels of student input in Harvard’s sexual assault policies; and a third seeks to ban student meetings from taking place at breakfast time.

The other three issues gained their spots on the ballot after students gathered 670 student signatures, or about 10 percent of the College’s student body, to garner support for the question.

This referendum, which will appear on the ballot in the UC’s upcoming presidential elections, follows campus-wide discussion about social life at the College and the role of unrecognized student groups like final clubs. Recently, on the heels of student calls for more on-campus social spaces, administrators have funded social events for the student body at large, such as a large outdoor party hosted by women’s groups and a College-wide Halloween party, which took place in Annenberg Hall on Saturday.