Students rally, calling for changes to Harvard Law School they say will improve the experience of minority students 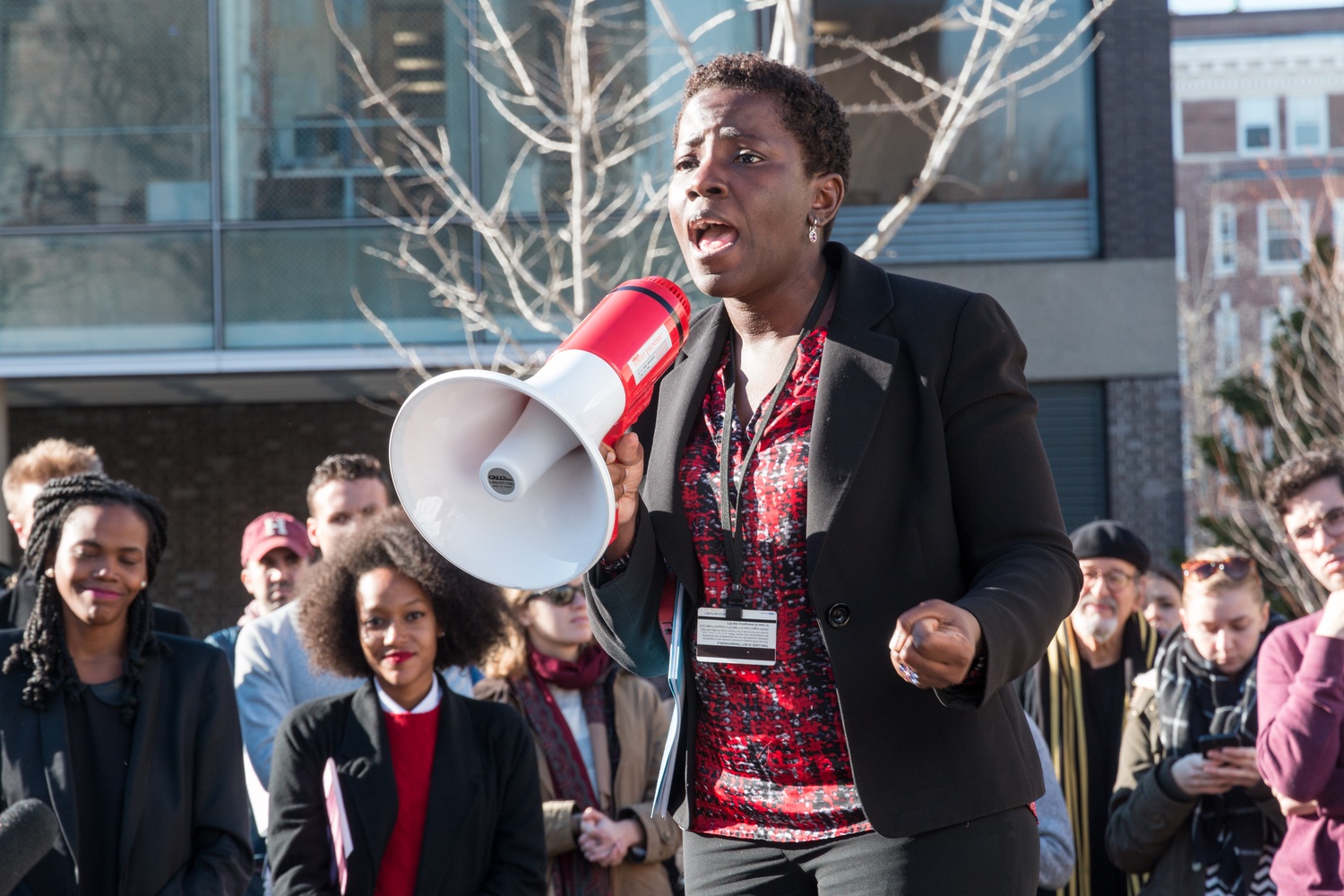 After making a series of demands they say will improve Harvard Law School’s treatment of minority students, more than 100 students gathered on the campus’s Kumble Plaza on Monday to protest what they said was Law School Dean Martha L. Minow’s failure to adequately address their concerns.

Law School students presented a series of demands—ranging from changing the Law School’s controversial seal, which has ties to slavery, to establishing a critical race theory program at the school—at a meeting of hundreds of Law School affiliates on Friday, asking that Minow respond to them by 9 a.m. on Monday. Students said they had not heard from Minow by the deadline and decided to gather in protest.

Law students have become increasingly critical of the school’s treatment of minority students in recent weeks, after a controversy in November involving pieces of black tape placed over the portraits of black professors. The incident, which police are investigating as a hate crime, intensified broader discussions about racism at the school, prompting administrators to call a series of community meetings about race.

At these meetings, Minow has outlined proposals that she said address some student concerns and will improve the experience of minority students and staff at the Law School. Still, some students are unsatisfied, and after their demands on the Law School’s administration were not immediately met, some Law School students are taking to campus spaces and the internet to advocate for their goals. 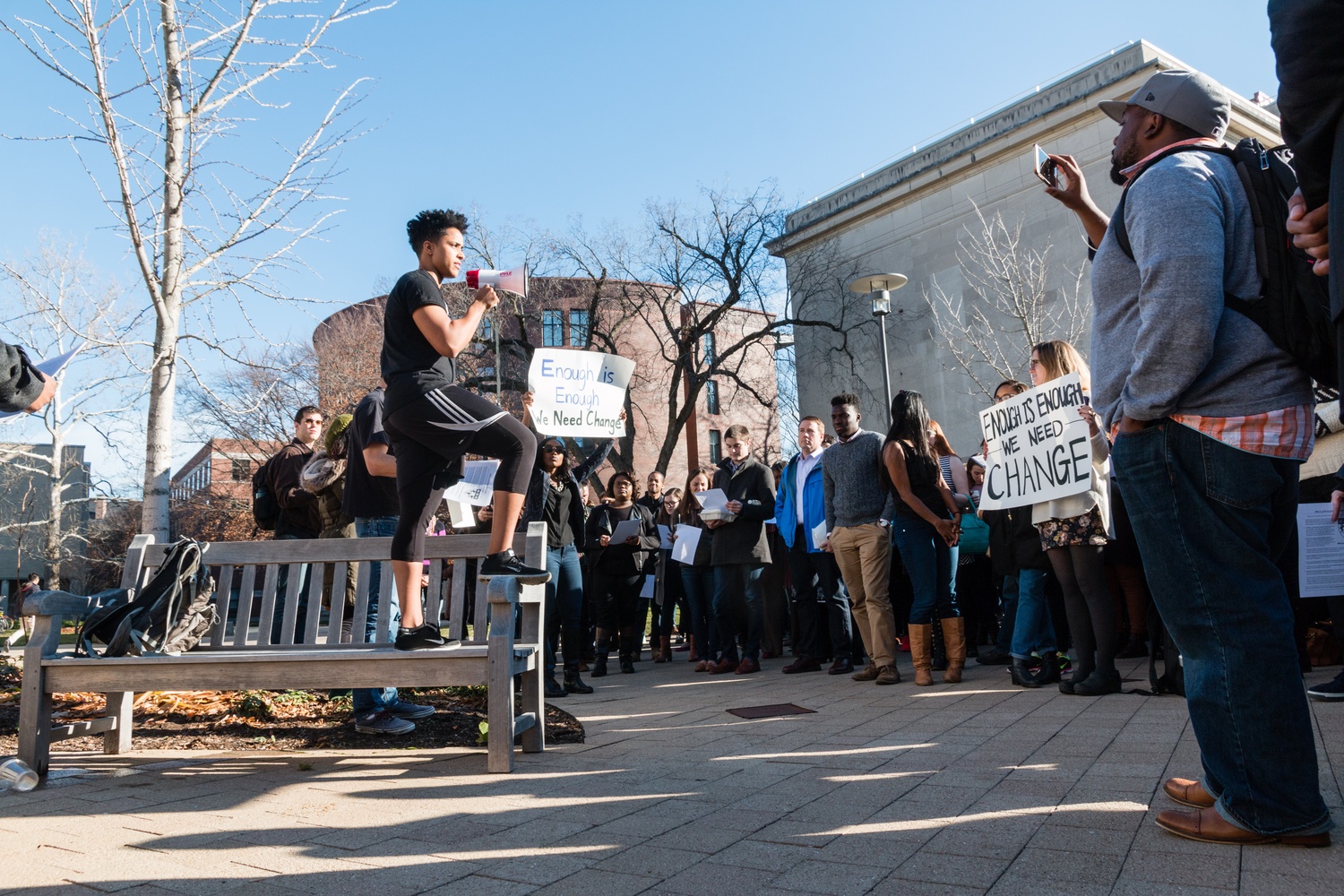 According to Shay N. Johnson, one of the students who spoke at Monday’s rally, student representatives went to Minow’s office around 9 a.m. on Monday. They were met by the school’s dean of administration, Francis X. McCrossan, who informed them that Minow was in Chicago on business, Johnson said.

The students, Johnson said, left Minow a letter, containing another copy of their demands and informing her that “we will be following up,” and signed “Best, Reclaim Harvard Law.” By 10 a.m., they had finalized plans for the rally on Kumble Plaza.

After speeches from several students and staff in support of the demands, Law School Dean of Students Marcia L. Sells, took to the megaphone to address the crowd, many of whom carried signs.

Calling Friday’s meeting “amazing and uplifting,” as well as “challenging,” Sells confirmed that Minow was in Chicago on previously scheduled business and that the administration was carefully considering a response.

“It’s important for us to really think through a response and to also make sure that we’re including the community,” said Sells, whose recent appointment was praised by members of Law student affinity groups. “A quick response to those issues would give them not the value...they deserve.”

Still, students reiterated the urgency of their demands and the need for a quick response on Monday.

“One thing we’ve been getting a lot is that we haven’t given the administration enough time,” said Rena T. Karefa-Johnson, a third-year Law student who spoke after Sells. “Students have been asking for these things for decades... We’re not going to stop.”

According to the president of the Harvard Black Law Students Association, Leland S. Shelton, student activists had begun to formulate a response ahead of monday Morning in case Minow failed to respond to their demands by the deadline they set.

“I don’t think any students realistically expected her to in 48 hours give a really deep detailed response to those demands,” Shelton said. The aim of the demands, according to Shelton, was “forcing her to say something.”

In an email Monday afternoon, Minow wrote to all Law School affiliates, reiterating her commitment to “building a truly diverse community.”

“Some students and staff have presented a list of demands,” Minow wrote. “We are, however, a community of many voices and hopes, and we have an obligation to provide and protect the opportunity for all to participate, speak and be heard.”

On Tuesday, students from Reclaim Harvard Law School—a coalition of affinity groups at the school—sat and studied together in Wasserstein Hall. According to student Alexander J. Clayborne, they were there to discuss their demands.

“We’re going to make it clear to the administration and to the Law School community that we’re not going away until we force Harvard Law School to achieve the promise that it gave us when we got here,” Clayborne said.