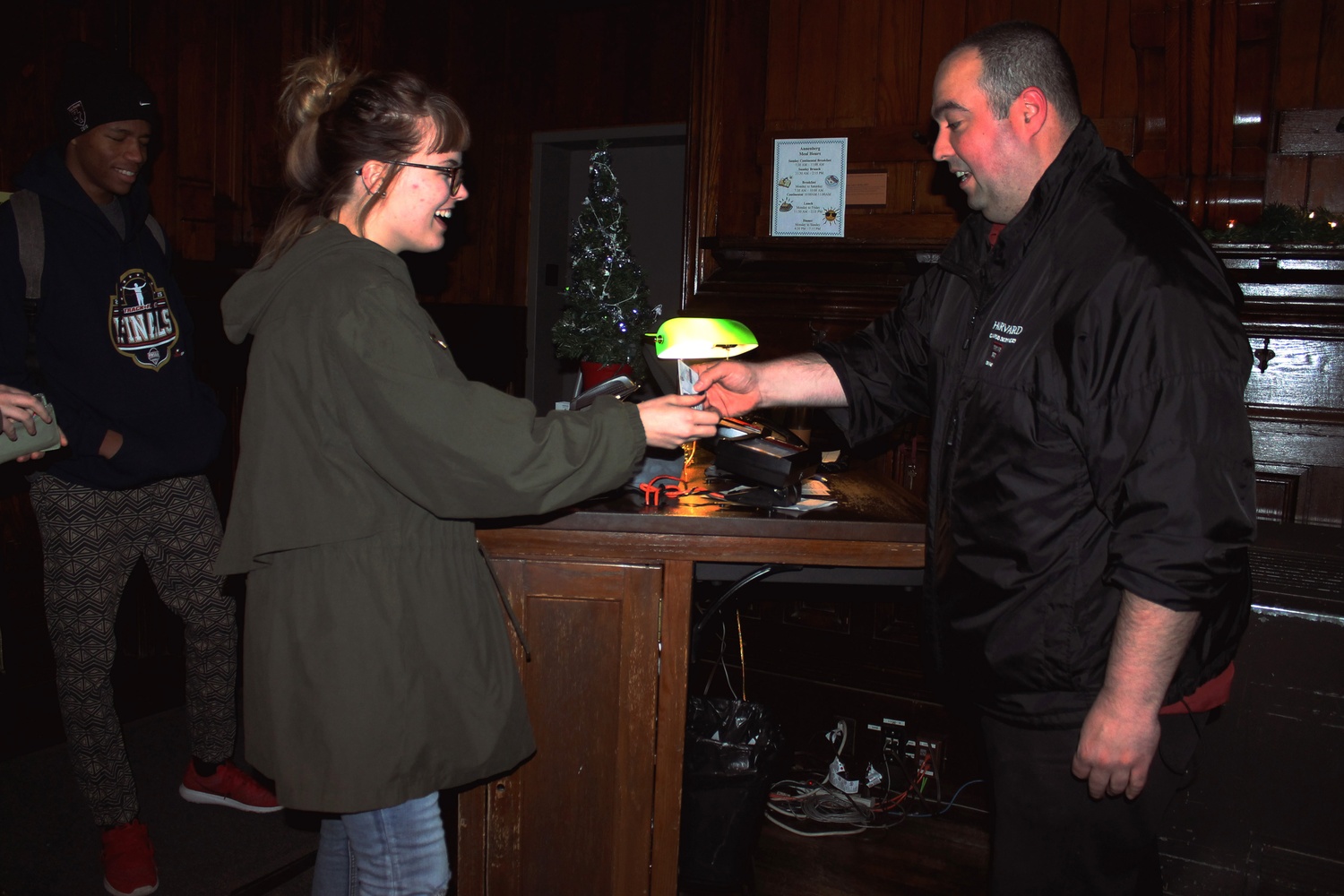 John S. Martin, an ID checker in Annenberg, swipes a student’s ID card during dinner on Tuesday night. Martin first worked at Leverett House and has worked at Annenberg for the past six years. By Jennifer Y Yao
By Joshua J. Florence, Crimson Staff Writer

It’s lunchtime at Annenberg, and a mass exodus of Economics 10 students streaming out of Sanders Theatre has swarmed the doors to the freshman dining hall. The line stretches beyond the doors to the sidewalk outside. Despite the grumbles from the back of the line, freshmen cheer up by the time they enter the dining hall and a friendly, boisterous voice greets them.

The string of students respond with the same phrase, “Thanks, John!”

Students have handed their IDs to Martin for six years. He jokes with them, playfully swiping their ID cards and engaging in small talk. Martin, or simply “John” to the hundreds of freshman he sees everyday, has become somewhat of a celebrity for students at Harvard. He said the most important part of his job is connecting with students and making freshmen feel comfortable during their first year at the College.

A DAY IN THE LIFE

Martin usually spends his day in Annenberg swiping students in, as well as performing other tasks which include occasionally chasing tourists out. But the part of the job he likes most is interacting with the hundreds of freshmen that eat in Annenberg everyday.

“My favorite part about the job actually is getting to know students,” he said. “That’s most exciting for me.” 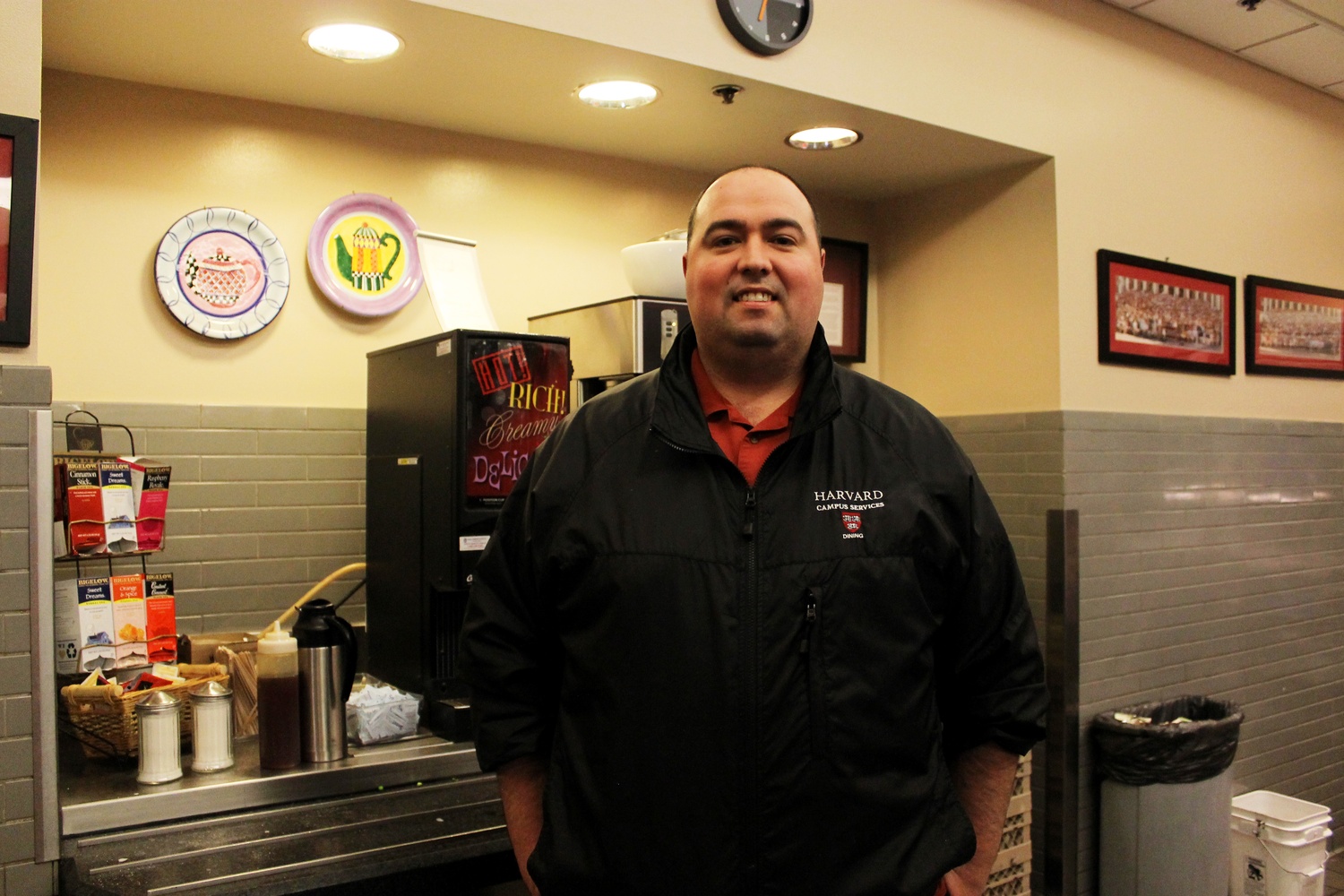 John S. Martin, Massachusetts native, has worked as an ID checker in Annenberg for the past six years. By Jennifer Y Yao

Above all, Martin says his goal is to make students feel comfortable in the dining hall through personal efforts such as memorizing students’ names. Davis Lazowski ’19 said he appreciated Martin’s efforts.

“I feel like all of the swiping staff, as a group, are some of the warmest people on campus, and John is especially so,” he said. “It’s amazing how he memorizes my name when there are [hundreds] of freshmen.”

“It’s something different to make everybody laugh and to make people feel comfortable,” he said. “You guys are coming from exams and stuff.”

The atmosphere in Annenberg that Martin creates has earned him praise from students and co-workers alike.

“He makes the students feel special and takes away the monotony of lining up for food everyday,” said Marina Wang ’19.

“He is a very nice guy and an easy-going person. It is very easy to work with him,” she said. “He was my trainer, when I became a checker, and he was very kind.”

While Martin does enjoy the community in Annenberg, he laments the short amount of time he has with freshmen each year.

“The only thing I don’t like is that we are only getting you guys for first year,” he said. “I mean it’s great because we get a new group in every year, but it would be better if we could see you guys for more than one year.”

Yet Martin also said he keeps up with many upperclassmen who come to Annenberg to eat breakfast.

During quieter periods of the day, Martin familiarizes himself with the history of Annenberg and Memorial Hall.

“I think we take it for granted when we are in here,” he said, while marveling at the busts on the walls. Martin also takes time to read the explanatory plaques below each statue. “Sometimes I’ll venture off and read a little bit of this or a little bit of that. I’ve been doing that more recently to try to get familiar with the building.”

FROM FENWAY PARK TO HARVARD YARD

Before arriving at Harvard, Martin worked around the Greater Boston area at some of the most famous sites in the city, including the home of the Boston Red Sox, Fenway Park.

For nearly his entire life, Martin lived in nearby Somerville.

“Growing up in Somerville, Harvard was here,” he said. “Me and my friends would always travel here. We’d go to The Garage and buy some hacky sacks.”

Martin started working at the concessions stand in Fenway Park while studying at Bay State College, located in Boston’s Back Bay.

“It was like my second year, and I was working at Fenway Park while I was going to school and [working at] Star Market,” he said. Star Market is a grocery store chain based in the Greater Boston area.

When Martin was working at Fenway Park, the Red Sox had not won a World Series championship in decades. While other employees went home after the stand closed at the end of seventh inning, Martin, an avid Red Sox fan, stayed behind.

“The best part was after the seventh inning they would let us watch the rest of game,” he said. Martin would often go to the stands to watch the game.

“I would always sneak up,” he said as he laughed. Martin said he was thankful to have seen some important moments in Red Sox history, including Derek Lowe’s no-hitter in 2002.

After a few semesters of working part-time at Fenway while enrolled at Bay State, Martin began to look for full-time employment.

“I couldn't come up with the money for the next semester,” he said. “And I was like, ‘Alright I’ll just take a semester off, and I’ll go back.’ But I ended up applying for a job [at Harvard], and I never went back to school. I just started working full time.”

Martin first worked at Leverett House. “I was a pot washer for twenty hours a week, and gradually I kept applying for in-house jobs,” he said.

However, in 2009, Martin was reassigned to Annenberg after all Harvard University Dining Services workers had to rebid for their positions because of staff downsizing.

Martin says he has found a home at Annenberg since moving there. When asked whether he prefered Leverett House or Annenberg, Martin emphatically said, “Oh, Annenberg!”

LIFE OUTSIDE OF THE BERG

While Martin spends well over forty hours each week at Annenberg, outside Cambridge, Martin enjoys sports and spending time with his family.

“I love sports,” he said. “And I’m watching as much as I can .” Martin remains loyal to his Boston roots, cheering on the Red Sox, Patriots, Celtics, and Bruins.

Above all, Martin shows a deep commitment to his young family. He has a five-year-old daughter and a son who will turn three years old on Thursday.

“I love spending quality time with my family,” he said.

Martin’s daughter is a Girl Scout, and he takes his whole family on many of her scouting expeditions. “It’s great. A lot of the activities she has, we get to do them with her, and the whole family can enjoy it,” he said.

His family recently left his hometown of Somerville for Tewksbury, a town about 45 minutes away from campus. Because of the longer commute, when he works the breakfast shift, Martin is unable to see his children in the morning, which has been a difficult change for him.

Looking to the future, while moving has presented challenges, Martin said he would like to continue working in Annenberg because he has found a community among his co-workers and students.

“My kids are going to school where we live, so if I was to change [jobs] it would probably be because of that,” he said. “I feel comfortable here. I really enjoy working here, and I think I’ll stay.”

—Staff writer Joshua J. Florence can be reached at jflorence@college.harvard.edu.