From Administrators to Apps 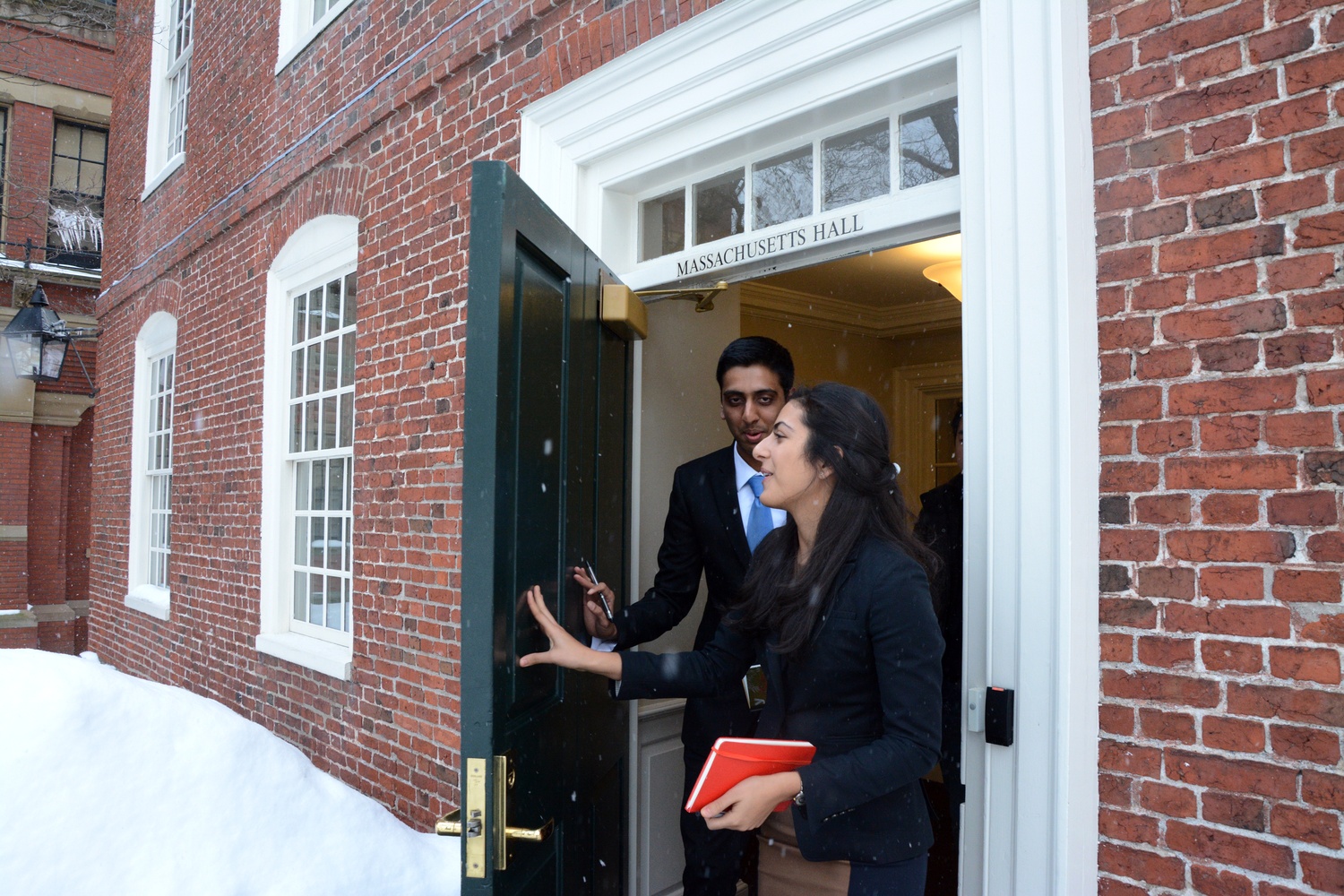 Last year, clad in costume, Gus A. Mayopoulos ’15 became president of the Undergraduate Council after winning a tumultuous election on a platform of bringing thicker toilet paper to student bathrooms and a particular kind of soup to dining halls. Alongside Vice President Sietse K. Goffard ’15, Mayopoulos soon embarked on a high-profile—and ultimately unsuccessful—social media campaign to secure $250,000 in student group funding from administrators.

So far this year, the UC’s top leaders have taken on a different approach. Its new president and vice president, Ava Nasrollahzadeh ’16 and Dhruv P. Goyal ’16, ran a traditional campaign, and since taking office, they have prioritized initiatives including a smartphone application package and a United Nations-inspired gender equity campaign, both of which have required little administrative support. At their semester meeting with University President Drew G. Faust, Nasrollahzadeh and Goyal voiced no monetary demands.

“The leadup was certainly different. Gus and Sietse used the [Faust] meeting in a very public way in order to generate attention about one particular thing,” UC Rules Committee Chair Brett M. Biebelberg ’16 said. “Ava and Dhruv approached it more as a standard meeting.”

Unlike their predecessors, Nasrollahzadeh and Goyal have expressed their desire to carry out plans for the Council without relying on administrators, preferring independently-run initiatives, raising the question of whether the UC should tackle larger student life projects or smaller ones that are easier to deliver.

Throughout the first few months of their term, Nasrollahzadeh and Goyal have been vocal about their intent to rely less on high-level administrators. In UC general meetings and in conversation, they highlight an application package—which includes an events calendar and a remake of Harvard’s official app—and their “Side by Side” gender equity campaign as two examples of “deliverable” projects from which the leaders believe future students will benefit.

Administrators “are very supportive of what we’re doing, and we’re very grateful for that, but we’re not entirely dependent on them,” Goyal said in January. “In that sense, getting projects done is something we’re more confident about.”

This rhetoric began with their November campaign. Instead of asking administrators to increase funding for student groups, Nasrollahzadeh and Goyal ran on a platform of soliciting alumni for that money. And while they have not yet laid out concrete plans for such a fundraising drive, they are planning to form an advisory network of UC alumni with the eventual goal of acquiring student group funding.

While the alumni advisory network’s primary goal is to gain funding, according to Nasrollahzadeh and Goyal, representatives must focus on first “building relationships” with alumni, which is likely to take some time.

This stands in stark contrast to the actions of Mayopoulos and Goffard, whose student group funding campaign was very public and dealt very directly with both students and administrators. Mayopoulos, for his part, acknowledges the disparity.

“They seem to be less dependent on the administration for their goals than we [were],” Mayopoulos said.

According to Mayopoulos, he got involved with the UC because he believed that the Council, prior to his and Goffard’s leadership, was not as visible to students. The Council “needed to be revitalized in the eyes of students,” Mayopoulos said. “I saw it as my charge to spread what the UC was doing.”

In general, a number of students—including Goyal and Biebelberg—argue that Mayopoulos and Goffard’s work last year successfully increased the visibility and efficacy of the Council as a whole. Their “UC 250K” campaign in particular generated a lot of student interest; before their meeting with Faust last February, students outside the UC joined Mayopoulos and Goffard in student rally, throwing toilet paper and delivering speeches.

According to Nasrollahzadeh and Goyal, their predecessors, who raised the UC’s public profile, have allowed Council leaders to shift their focus to more tangible—and, as Goyal calls them, “deliverable”—goals.

“That visibility has allowed us to take our projects forward,” Goyal said. “Our projects would be nothing today without the increased visibility that Gus and Sietse gave us.”

Nasrollahzadeh and Goyal argue that their decision to prioritize initiatives that do not directly involve administrators is at least in some ways more effective. Goyal cited “Harvard Oasis,” a March event that was funded by an anonymous donor, as an example of a successful, short-term initiative that the UC executed quickly in collaboration with other student groups. This kind of collaborative effort may not have been possible without Mayopoulos and Goffard’s tenure, Goyal said.

“It was pretty cool how they were able to do that,” said Faith A. Jackson ’16, who ran unsuccessfully for vice president in the fall’s UC leadership election and is not a member of the Council. “I feel like other administrations may not have been able to do something like that, because they would have been focused on more of those bigger initiatives.”

Others acknowledge that the current leaders’ approach can have benefits. Mayopoulos said the strategy can be effective, as working closely with administrators can lead to difficulty in terms of constantly having to ask for permission and funding.

Associate Dean of Student Life David R. Friedrich, for his part, wrote in an email that Nasrollahzadeh and Goyal “have very quickly and effectively identified opportunities to make progress on a number of important projects.”

Still, some students argue that UC leaders should focus on bigger projects that require administrative support.

Nasrollahzadeh said Ventfull, the Council’s events calendar app, addresses exclusivity issues in that it “makes the already open and inclusive events on campus more visible.” But Jackson, who ran with the campaign promise of creating an inclusive and non-gendered social space for undergraduates, argued that the UC’s mobile app package and other small-scale initiatives do little to inflict meaningful change.

Jackson added that despite an initial push for publicity, interest in the app has dwindled: “There’s no buzz around people wanting to use this anymore,” she said.

“I think that it’s a very superficial initiative,” she added. “I don’t think that [Ventfull] really attacks structural changes on campus.”

Mayopoulos adds that addressing some issues may require the benefits and burdens that stem from administrative collaboration. “There are issues that you do need to work with the administration on,” Mayopoulos said, pointing out the case of student group funding. He argued that Nasrollahzadeh and Goyal’s plan to solicit alumni funds for student groups may prove difficult and inefficient.

“It’s a huge challenge, and the University is really more equipped to do it than the UC is,” he said.

Still, Nasrollahzadeh and Goyal say they are confident in the Council’s role as an instrument for change and add that they have more large-scale initiatives in mind. The Council plans to extend its gender campaign and reach out to student groups—potentially including final clubs—for gender equity pledges and eventually pass a piece of legislation with “action items” in order to increase communication between final clubs and recognized student groups like the UC. (Nasrollahzadeh is in a final club.)

Nasrollahzadeh has also expressed the desire to create a cultural center in the Smith Campus Center, which is not slated to undergo construction until 2016.

“While it may not seem like they’re flagship issues, they’re still making progress,” Mayopoulos said.