A University-Wide Survey, With a College Focus 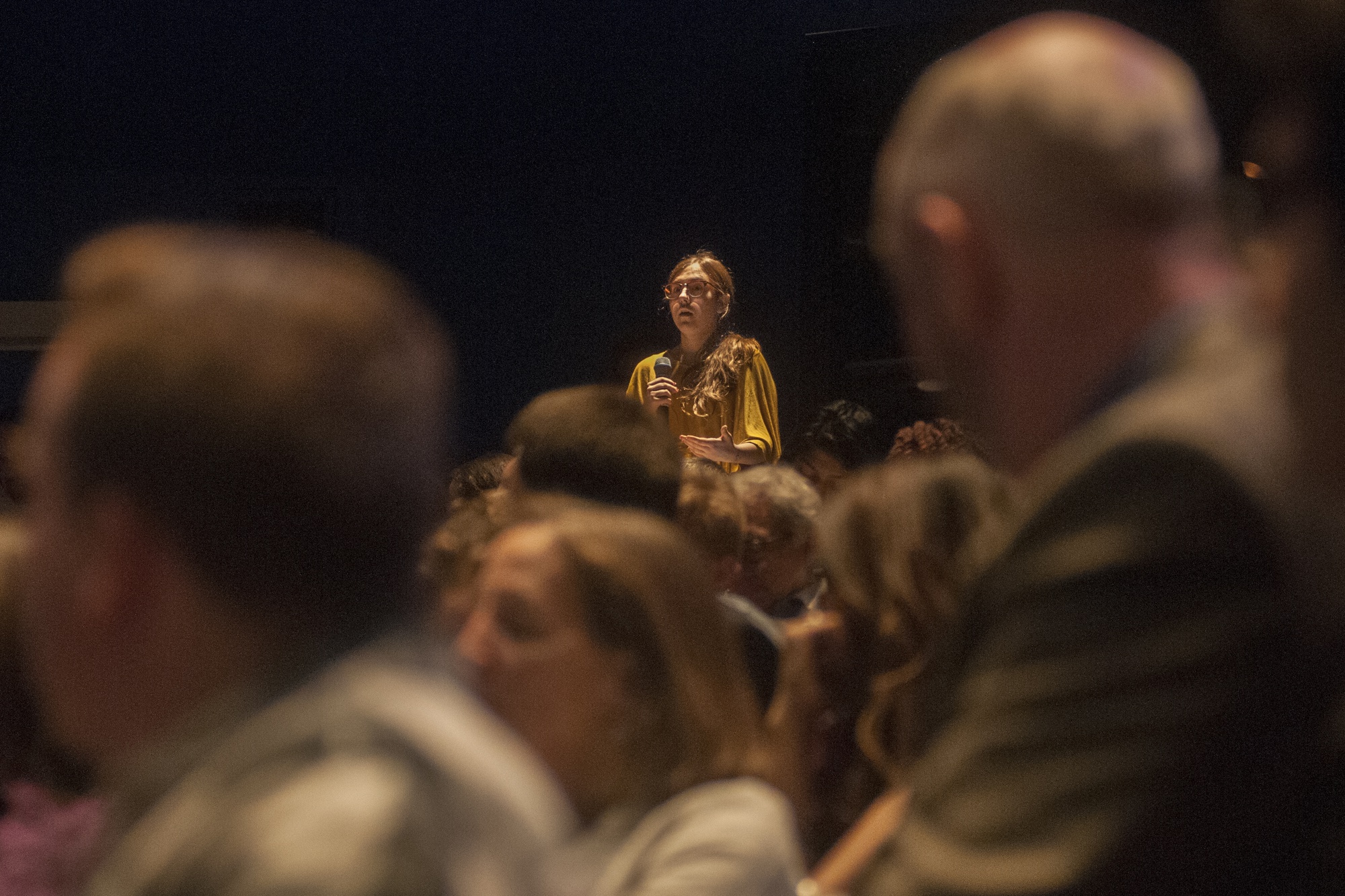 Vegas L. Longlois ’16 expresses frustration at what she perceived to be an impersonal academic approach on the part of the University in conducting the sexual conduct climate survey and presenting its results on Monday evening. During his presentation, Professor. David I. Laibson ’88 explained that the designers of the survey aimed to keep questions general in order to protect the anonymity of participants.
By Noah J. Delwiche and Ivan B. K. Levingston, Crimson Staff Writers

In the midst of an ongoing federal investigation and intensified criticism from its constituents over how Harvard College addresses and prevents sexual assault on campus, the results of a highly anticipated survey on the subject revealed a stark picture of campus-wide distrust and confusion.

On Monday, the University released the results of a sexual assault climate survey that Harvard distributed among students at all schools last semester. Compared to the other 26 colleges and universities that circulated a similar version of the survey, developed by the Association of American Universities, Harvard received the highest response rate, with more than 53 percent participation among students University-wide. 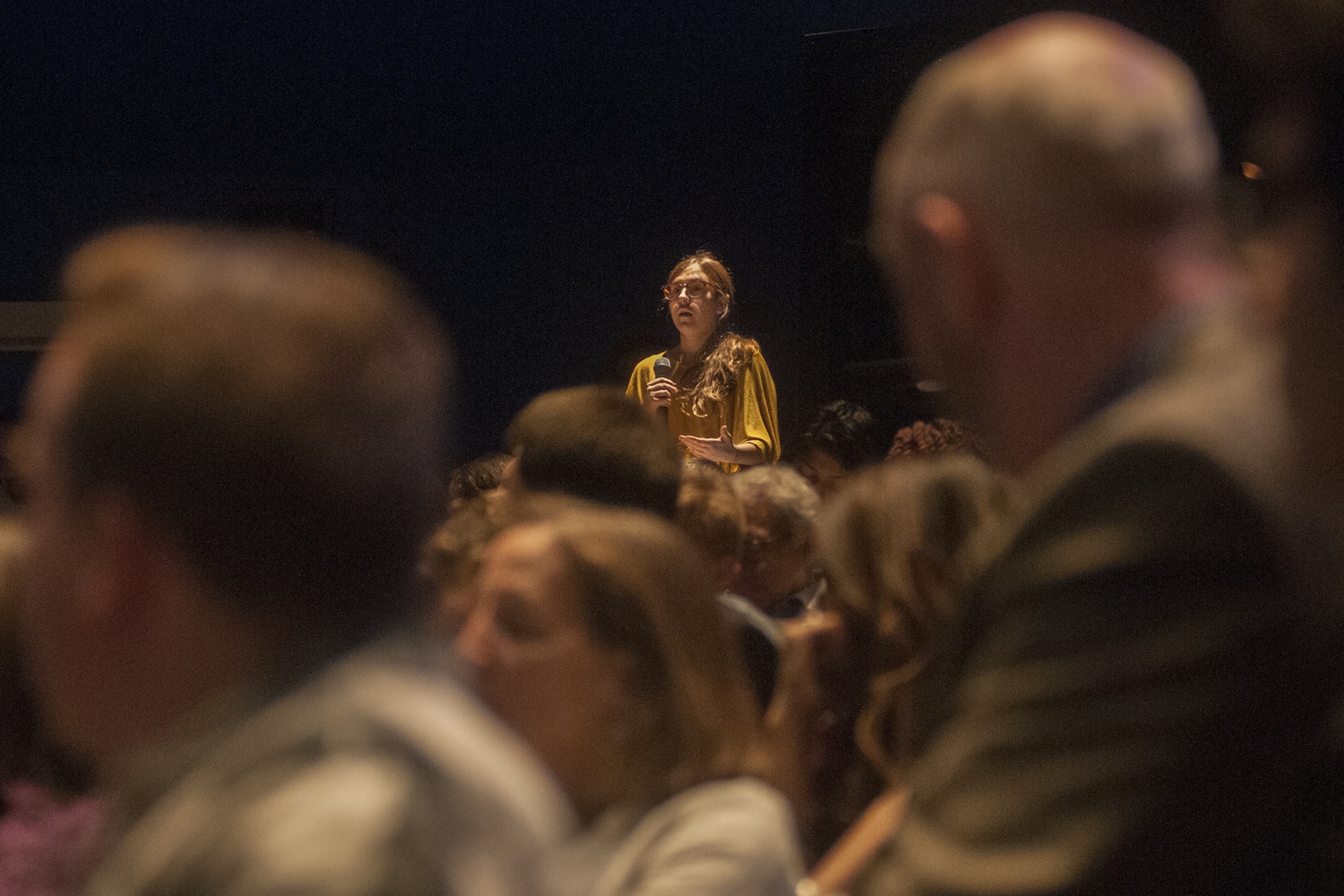 Vegas L. Longlois ’16 expresses frustration at what she perceived to be an impersonal academic approach on the part of the University in conducting the sexual conduct climate survey and presenting its results on Monday evening. During his presentation, Professor. David I. Laibson ’88 explained that the designers of the survey aimed to keep questions general in order to protect the anonymity of participants. By Madeline R. Lear

For a college that has in the past two years been the subject of heightened internal, media, and federal scrutiny over its Title IX practices, the survey results yet again focused the attention of both campus stakeholders and outside observers on how the College specifically handles the issue.

Although Harvard as a whole had a lower incidence of sexual misconduct reported by student respondents from all its schools, according to the survey results, among undergraduates the rate was notably higher.

Thirty-one percent of senior female undergraduates at the College surveyed reported having experienced some kind of sexual misconduct—what the survey termed “nonconsensual sexual contact”—during their time here, which is several points higher than the average rate of all schools participating in the AAU survey. Sixteen percent of female Harvard College seniors surveyed, meanwhile, said they had experienced unwanted sexual penetration or attempted penetration involving physical force or incapacitation in that time.

Further, survey results indicate that Harvard undergraduates lack confidence in the University’s ability to respond to sexual assault complaints. Compared to other colleges that participated in the survey, undergraduates at Harvard indicated significantly lower levels of trust in their school’s sexual harassment grievance process and increased uncertainty about the College’s resources and policies.

Only 16 percent of female undergraduate respondents reported that they believed Harvard was “very or extremely likely” to take action against perpetrators. In contrast, the same figure averaged across other schools participating in the AAU survey was 37 percent.

And even as the University overhauled its investigatory procedures into cases of alleged sexual harassment and increased resource allocation to several offices, according to the survey, students are still confused and hesitant.

In the aggregate, the AAU survey results confirm previous, smaller studies about the prevalence and culture surrounding sexual harassment on college campuses, according to S. Daniel Carter, the director of 32 National Campus Safety Initiative, a group that advises colleges on campus safety issues.

“Overall it demonstrates what we've known for a long time: that sexual victimization in college and university campuses is extensive and vastly underreported, and lack of consent is an overarching factor in most cases,” said Carter, who has worked with Westat, the consulting company that administered the survey.

In a stream of mass emails in the hours following the release of the survey results, University President Drew G. Faust called them “deeply troubling,” while Dean of the College Rakesh Khurana termed them “deeply distressing.” In separate emails to residents, College House masters characterized the survey results in terms ranging from “concerning” to “overwhelmingly distressing.”

The sentiment, it seems, is shared by students. Faust hosted a Monday night discussion on the results, and a crowd of about 150 students filled Science Center D, so many that attendees required an additional overflow room. Top University and College administrators, from Dean of the Faculty of the Arts and Sciences Michael D. Smith to former interim dean of the College Donald H. Pfister, attended as well. 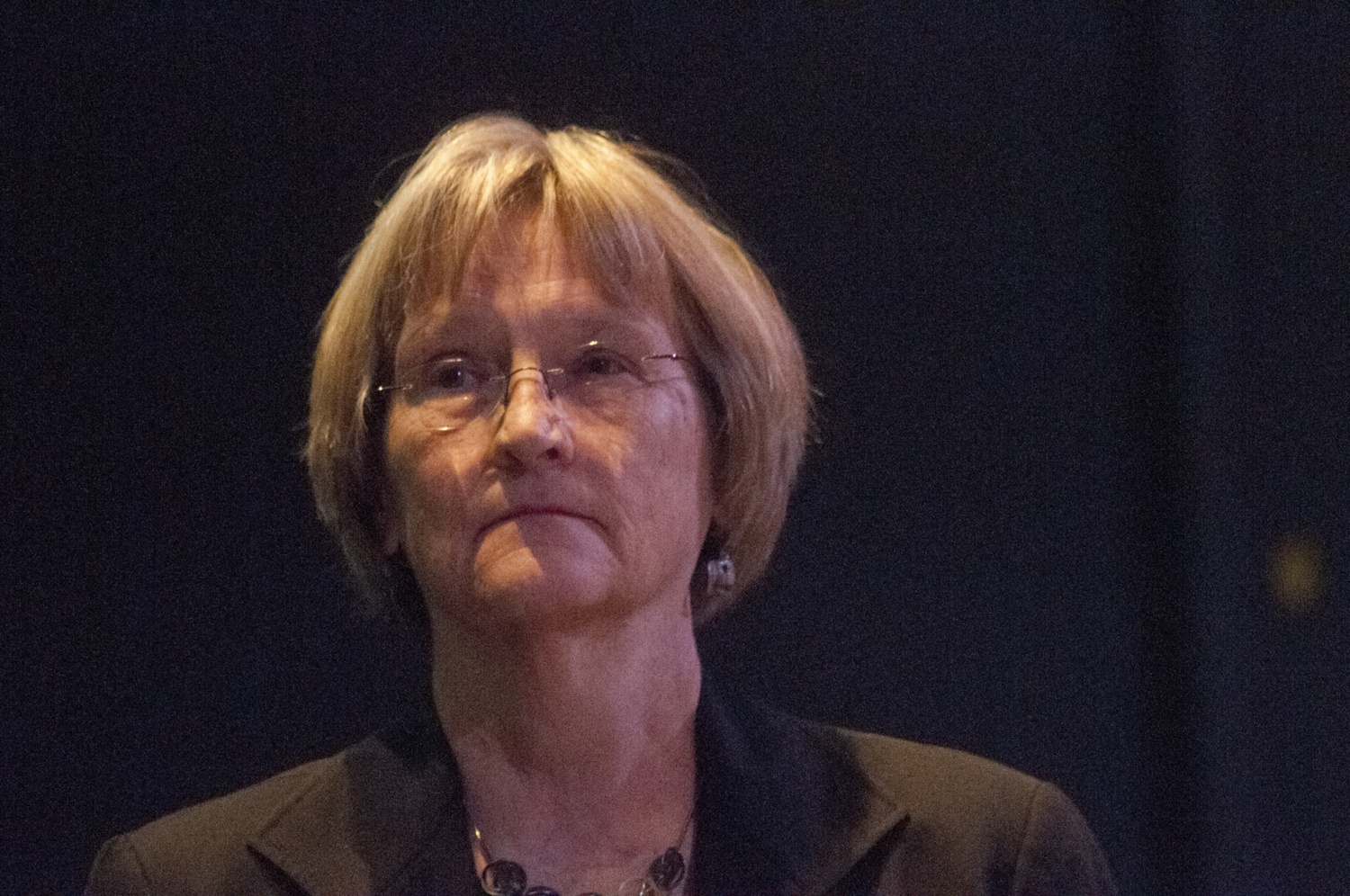 University President Drew G. Faust listens to comments during an open forum following the release of results of the sexual conduct climate survey on Monday. By Madeline R. Lear

Students stood up to demand answers and suggest solutions to the problem. They asked about final clubs and their peers’ awareness of sexual assault resources, student programming, and freshman orientation.

In separate interviews, administrators reiterated their concern. Visibly perturbed, Khurana paused at times throughout a series of questions while elaborating what he said were “deep, systematic structural issues around safety” as well as the “dynamics of power” at the College.

“The fact that anyone... is subject to experiencing sexual assault and attempted sexual assault at the rates that we are seeing is painful and demands action,” Khurana said. “I’m still digesting actually the full gravity of what we are talking about here.”

Alicia Oeser, the director of Harvard’s Office of Sexual Assault Prevention and Response, said she was not particularly surprised by the survey’s findings about sexual assault’s incidence on campus, given that they are relatively consistent with past data and her own office’s experiences.

“It doesn't feel particularly surprising on our end,” Oeser said. “It’s good that we are seeing the scope so that we can begin addressing it.”

Undergraduate student activists, although they too said they were unsurprised by the survey results, added that they hope administrators will use the data to make policies more transparent, bolster Title IX training, and improve accommodations for victims of sexual violence.

Jessica R. Fournier ’17, an organizer for Our Harvard Can Do Better, an anti-sexual assault advocacy group, said the data, although “damning,” reveal trends that University officials should have previously known.

Beyond concern, the release of the survey results prompted students and College officials alike to note a need to improve campus resources and their communication and otherwise rethink sexual assault prevention.

Fournier suggested that the College needs to improve its transparency, further research social spaces, and ensure that students of all identities—such as BGLTQ and disabled students—receive necessary resources.

Oeser said her office is working on a “model around social change communication,” a graphic decision tree for individuals to identify various resources based on the point of intervention in a given situation, whether relational, cultural, or individual. She acknowledged the lower level of awareness regarding University procedures and resources demonstrated by the survey. 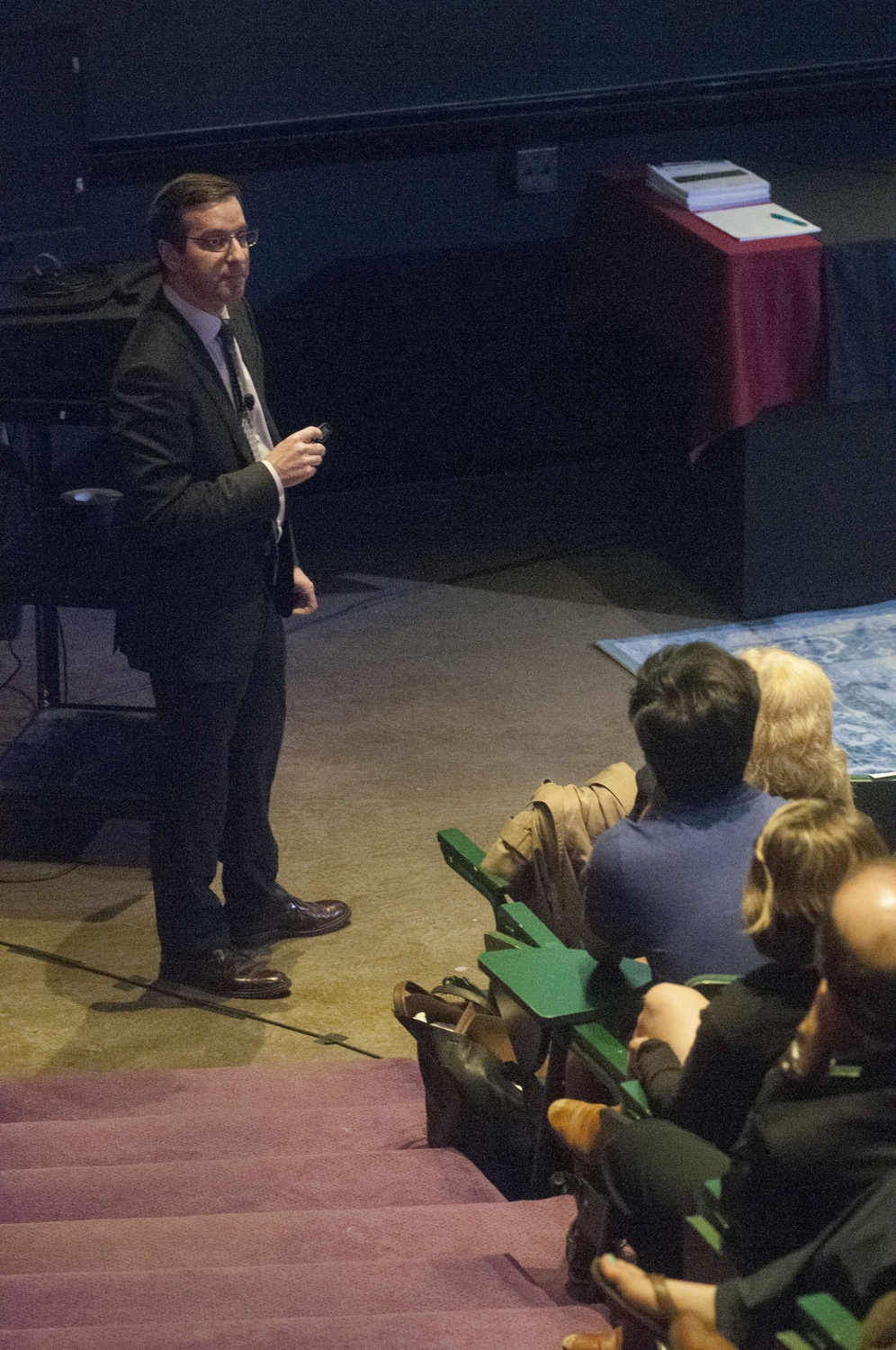 Professor David I. Laibson ’88 presents the results of the sexual conduct climate survey at an open forum in the Science Center on Monday evening. The results came as the College faces an ongoing investigation into its compliance with Title IX. By Madeline R. Lear

“There’s a lot of room to improve the communication about our services and make it more available,” she said.

Other than making existing resources more accessible, one takeaway from the survey is the need to look closer at social spaces on campus, as well as alcohol use, according to the Harvard task force that analyzed the results.

Former Harvard Provost Steven E. Hyman, now the chair of the roughly year-old Task Force on the Prevention of Sexual Assault, broke down the survey results to Faust in a report, urging several points of action.

One was the need to further study social spaces on and off campus and “effectively” address them.

Survey results from female College student showed that more than 75 percent of incidents of sexual assault involving attempted or completed penetration occurred in dormitories; with at least 15 percent of incidents, the second highest reported location was “single-sex organizations that are not fraternities or sororities”—a category that would include Harvard’s unrecognized final clubs.

As Hyman noted in his report to Faust, however, the survey did not identify where those incidents originated, and so he recommended further research to find “more concrete information about the role of physical spaces, including the Houses and recognized and unrecognized social organizations.”

Most reported incidents of sexual assault involving attempted or completed penetration involved alcohol. “Prevention efforts are not likely to succeed if we do not, as part of our final report, suggest approaches to decreasing the harm associated with student drinking,” Hyman wrote, referencing Faust’s request that his task force present her with a set of “detailed” recommendations for sexual assault prevention in January of next year.

Khurana, for his part, said a deeper understanding of the role that space and place play in sexual assault is necessary to understand the underlying factors and where unsafe interactions begin. In particular, he forcefully called out single-sex organizations for being unaligned with what he says are the ideals of the College, seeming to echo concerns raised previously by administrators about final clubs and the potential for sexual assault to occur on their properties.

“Harvard College is a co-ed institution,” Khurana said. “Any organization that lays claim on its membership, for its reputation, for its identity of being connected to the College, has to recognize the full responsibility of what it means to join Harvard College and its co-ed mission. ... I will not allow the word ‘tradition’ to be used to protect the status quo.”

Khurana repeatedly emphasized the need for Harvard affiliates to reflect together and work to improve problems areas highlighted in the survey.

The College will host a series of town hall events about the survey this week.