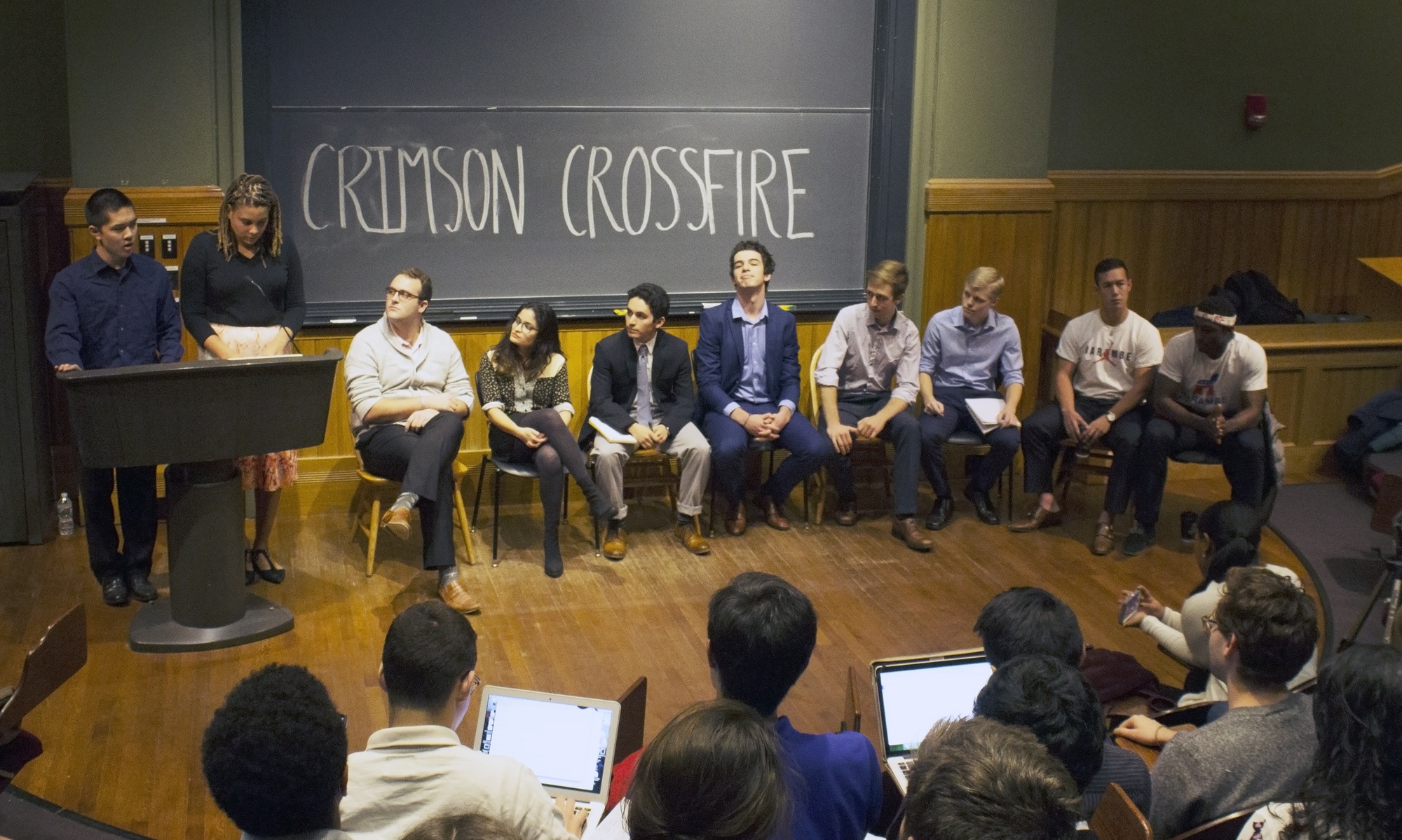 Three of the four tickets seeking to lead next year’s Undergraduate Council said in a debate Friday night they are opposed to the College’s announced sanctions against unrecognized single-gender social organizations.

When asked to comment on the issue by Crimson debate moderators, only one pair of candidates—that of presidential hopeful Eduardo A. Gonzalez ’18 and running mate Alex Popovski ’19—indicated support for the policy, “conditionally.” They said they are in favor of gender equity—one of the College’s main motivators for the sanctions—but believe that the formulation of the policy was “handled poorly,” Gonzalez said. 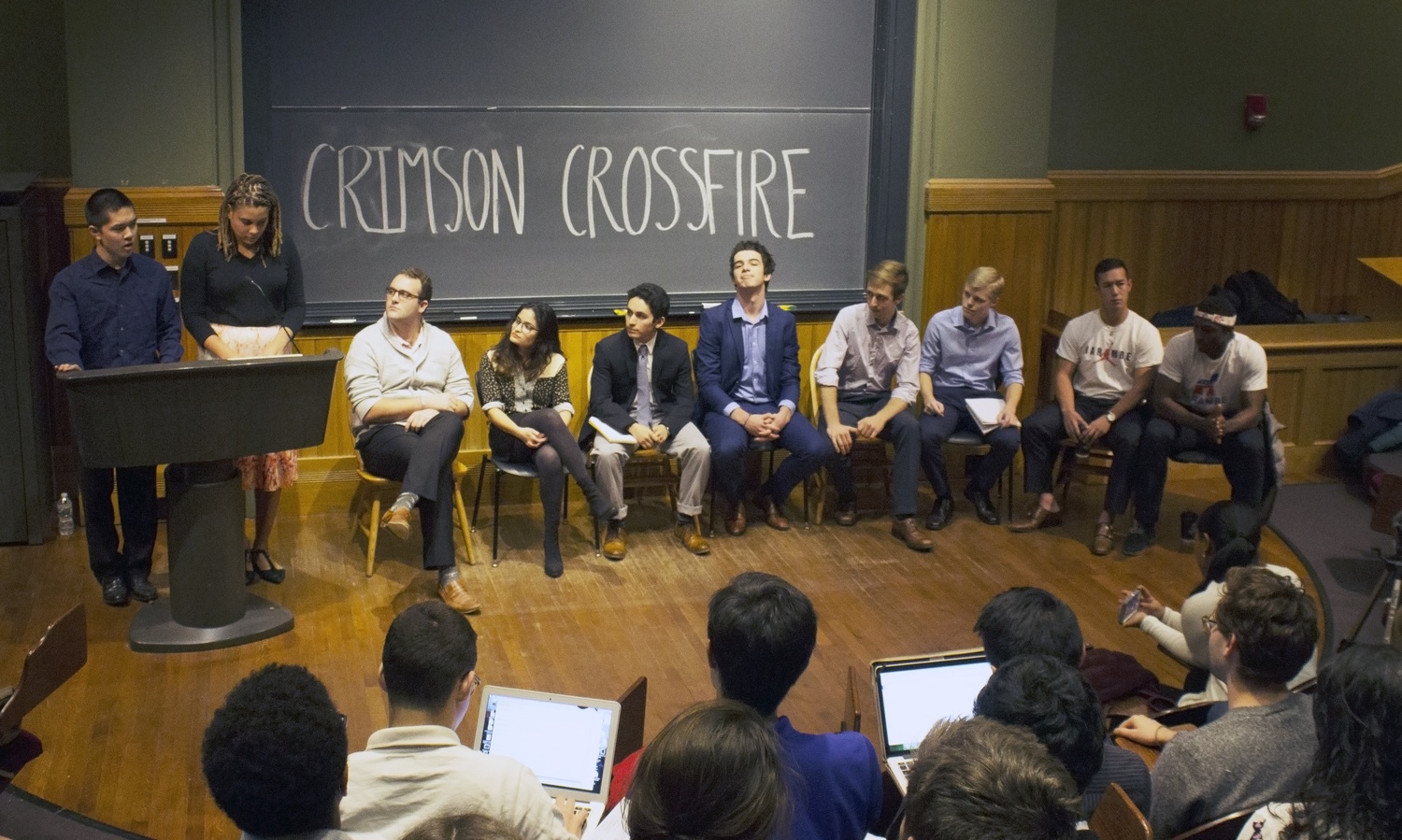 Students running for the Undergraduate Council president and vice president positions participate in a debate hosted by The Harvard Crimson reporters on Friday night. The debate, called “Crimson Crossfire,” covered topics such as sexual assault prevention and social club policies. By Aridenne A. Dews

Announced in May, the policy bars members of all unrecognized single-gender social organizations, such as final clubs and Greek organizations, from holding leadership positions in recognized student groups, becoming varsity athletic captains, and receiving Harvard endorsements for prestigious fellowships. The announcement of the sanctions, which will go into effect for members of the Class of 2021 and beyond, was met with widespread condemnation from graduate leaders of male and female final clubs, national Greek organizations, and many undergraduate women—though some students, coaches of athletic teams, professors, and members of the Harvard Corporation expressed support.

Echoing others who have criticized the policy, UC presidential hopeful Scott Ely ’18 said Friday, “We believe that there is a fundamental disconnect between the stated goals of the University—namely reducing the incidents of sexual assault, and inclusivity—and the policy that they’re actually trying to implement.”

Another presidential candidate, Yasmin Z. Sachee ’18, who is a member of the all-female Bee Club, said, “It’s a one-size-fits-all policy—a policy that is not nuanced, and gets rid of women’s spaces on campus.”

Moderated by members of The Crimson staff, the “Crimson Crossfire” debate was held Friday night in Sever Hall. Candidates responded to questions about their policies and views on hot-button issues such as mental health on campus and the U.S. Presidential election.

All candidates found common ground when they responded affirmatively to a question asking whether they would support undocumented students at Harvard in light of the election of Donald Trump to the nation’s highest office last Tuesday.

Since then, students across campus have organized in support of undocumented peers out of concern for how the President-Elect’s immigration policies could affect their ability to continue their education at Harvard: A petition, circulated on social media and House lists over the past few days, called on administrators to support Harvard’s undocumented immigrants by hiring a new Dean of Equity, Diversity and Inclusion, creating an office to support undocumented students, and establishing a new budget to aid undocumented students in immigration-related legal proceedings.

All UC candidates said they had signed, or planned to sign, the petition.

Despite sharing similar stances on several controversial issues, the candidates sought to distinguish themselves based on their past experiences on the UC and argued that their tickets would be best equipped to represent the full diversity of the undergraduate body.

“Experience is not a guarantor of wisdom or insight,” said Bonsall, one of two sophomores running for vice president. “It’s the work done—not time on the Council, but what you achieved on the Council.”

No ticket with a sophomore candidate has won the election in nine years.

Still, not all of the tickets have previously served on the UC. Presidential candidate and tennis player Solomon and running mate, sprinter Moore, are running as an outsider ticket. Last year, a pair of varsity wrestlers, Nick E. Gajdzik ’16-’17 and Jeffrey M. Ott ’16-’17, ran on a similar platform of supporting student athletes on campus.

“Running in our first or second year, we consider almost foolish, not knowing the community and the people and unique perspectives they have,” Solomon said. “Now that we know—not everyone—but more folks on this campus and the groups that they belong to and the values they hold, now is the time to take the plunge, give it a shot and create real change.”

Moore, who is also a member of the all-male Fox Club, added, “We bring an outsider’s perspective and we recognize that… But 99 percent of Harvard is not on the UC. They’re just normal students, and we want to have conversations with them and get everyone involved with what we’re doing in the UC.”

Gonzalez likewise emphasized what he said is his ticket’s ability to represent the needs of all Harvard students, including women and minority groups. “We’re two straight, cisgender men,” Gonzalez said, referring to himself and his running mate. “But that means we just have to work twice, three times as hard to hear inclusive perspectives.”

Vice-presidential candidate Khansarinia said his ticket would be the best one for including more women’s perspectives in the Council, referencing his running mate Sachee, the only woman candidate in this year’s election.

Voting for the UC presidency and vice presidency will open online Nov. 14 and close Nov. 17.