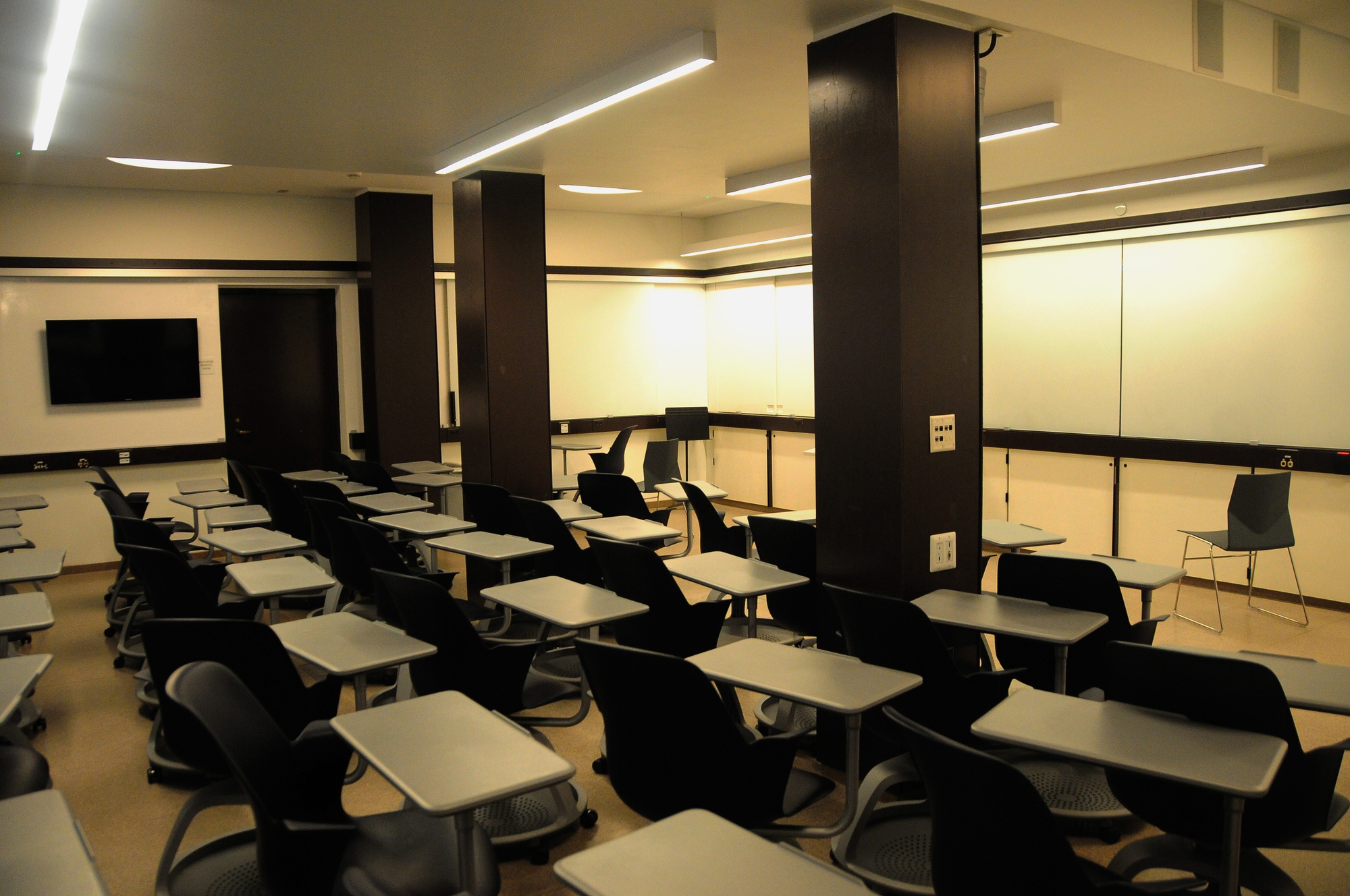 The "smart classroom" in Stone Hall of Quincy House contains improved technology, including touch-sensitive tablets and cameras. Renovations at Quincy House are a part of Harvard's attempt to foster learning communities throughout the houses in an era of rapid technological advancement. By Thomas W. Franck

This section always went to hell every four years.
By Ben G. Cort

“So, what did everyone think of the readings this week?”

There was a general ruffling of papers and casting of eyes down towards the floor. “Thank you for the opportunity to speak here today,” drawled a kid from the corner. His lips were pursed into a small “o,” his jaw jutted forward, and his face was topped by a precarious slick of orange hair. “I mean, this guy, I don’t know who he is, he had a lot of great ideas. I liked that he took strong stances on things, I liked that he wasn’t going to stand for these bad hombres getting in the way of his economy. He seemed like he really stood for the little people. The only thing I didn’t like was the title. What language was that? Mexican? Definitely not English. Big mistake. Sad.”

“Um,” another kid piped up from the other side of the room. He glanced at the TF, who seemed too stunned to speak. “We read ‘Mein Kampf’ this week.” He paused. “By Hitler. Adolf Hitler.”

“He’s not my best friend, but he can really write,” the first kid continued. “Truly, one of the best writers, and I know the best writers. I thought the reading was inspiring, very inspiring. It seemed like they were having a lot of problems. These people he was dealing with, not the best. Not winners. Coming in and taking money, jobs. I’m surprised, really, I’m really surprised, that this guy never wanted to build a wall. I built a wall in my common room, a good wall. My roommate can’t get over, and he’s from, uh, Kenya. Think about that. So I’ve had a lot of experience. I mean, with the economy, with business. Have you heard of my startup? We’re doing big things. Yuge things.” He began sliding business cards around the table.

A girl placed her hand on the shoulder of the boy. He winced. The grip was a little too tight. “Thank you, Jim,” she smiled, her teeth pearly white. She rose, her blonde hair immobile. “My friend, Jim, I think that’s a great point. I really do, Jim. This boy here is following a very insidious line of thinking. Something very un-our-section. You know, Jim, it reminds me, Jim, of the time I took a class on World War II last semester. And the semester before that, and every other year at Harvard I’ve taken a course on World War II, and all the courses I took throughout high school were also about WWII. Could you say, Jim, that I was born to speak in this section?” She laughed. “You could say that, Jim. Thank you.” She sat back down, smile still firmly affixed to her lips.

“You’ve taken how many classes? Why are you here?” Someone piped up. There was a general murmur of agreement.

The TF shook himself from his stupor. “Anyways, if we could—”

The orange haired boy kicked his feet up on the desk and jumped in before the TF could finish. “Let me tell you guys something about her. This girl, over here, she’s a nasty student. She writes a paper, some time last year, it could have been two years ago, maybe three. She submits it and she’s put under investigation from the Ad Board. Terrible. Could have been a major plagiarism violation. Could be expelled. Where is the paper? Where is it? She never released it. Very suspicious. She’s not the type of girl we want in our section.”

“Let’s move—” the TF tried, halfheartedly, before the blonde girl cut back in.

“And like you, I don’t want to see this section fall prey to this kind of bigotry, and this kind of intolerance.” She gestured at the orange-haired kid, who was shrugging aggressively at his neighbors, lips pursed. “Hitler rose to power because he preyed on the weak minded, and we will not fall under his influence in this section. Three Reichs and you’re out! We will Nazi a Fourth Reich in this section!” She paused. “Get it? Because ‘Nazi’ and ‘not see?’ Guys? Jim?” There was a brief silence, and then uncomfortable nods of assent.

“On. Let’s move on.” The TF blurted out. He sighed heavily. This section always went to hell every four years.