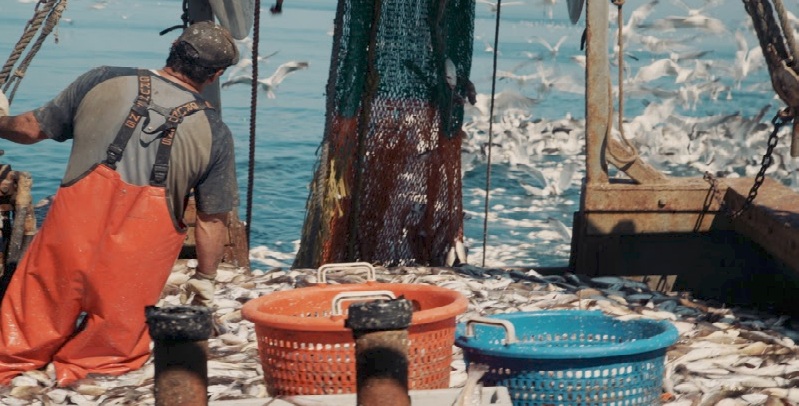 Earlier this month, the department of visual and environmental studies organized its semesterly student film screenings to showcase a series of short fictional, documentary, and animated films that are produced in Harvard’s film making/video making classes. The Crimson talked to several participants about their works and their experiences.

By Courtesy of Benjamin D. Sorscher

With no dialogue, the short documentary follows fishermen Al and Joe as they bring in the daily haul.

The Harvard Crimson: How did you decide to make this film, and has your focus changed over time?

Benjamin D. Sorscher: This film is actually a smaller part of a larger film I’m working on. I was just reading news about some fishermen in New England. They’ve been faced with a difficult situation recently—some combination of overfishing and climate change—and fish population have gone way down. So the government steps in and puts quotas on the number of fish they are allowed to catch. It seems like a tough situation, because on one hand fishing is deeply rooted in the tradition of New England and many fishermen are losing their jobs. On the other hand you have to do something to protect the environment. So I was interested in that.

I got in touch with some fishermen. It took a long time to get them to be comfortable with me coming to film. I actually spent a day scooping red fish soup for them, and I think that helped them to know me better. So they let me come on their boat with them, and that was just such a completely alienating experience. We got up at 2 A.M. It was pitch black. We drove for three hours out to the middle of water. They dropped their nets in it, dragged them for an hour, and then pulled in this absurd amount of fish. I’d never seen any of this before, and I was with my camera, so I just tried to capture as much as I could. So [the focus of this project] kind of has changed. I was more interested in the plight they were facing, but at some point I just became very interested in their work and wanted to capture what exactly this experience is like.

THC: How did you recreate this particular experience on screen?

BDS: One of the strongest feelings I felt was the sense of total isolation. You really feel there’s nothing around. The fog was surrounding us. You couldn’t see more than 50 feet, but you knew that even if you could, there wouldn’t be anything to see. I really tried to just lock the camera down and have these composed frames, long shots. It kind of felt like the fish and the sea were infinite. I wanted to compose the frame so that the fish spill off the frame, [to show] this infinite pile of fish, this infinite mass of water.

THC: After filming, how did you structure the movie during the editing process?

BDS: I just wanted to cut it together so that it conveys what exactly this experience is like. When I was talking to this woman Angela [who is a fisherman’s wife], she got kind of emotional and she was like, “Ben, you know, this is all we’ve ever done. We’ve been doing this for centuries and we are not going to be able to do it anymore. We’re the last fishermen in New England, so we need you to come and capture what this experience is like.” When I heard that, I was like, now I know what to do. 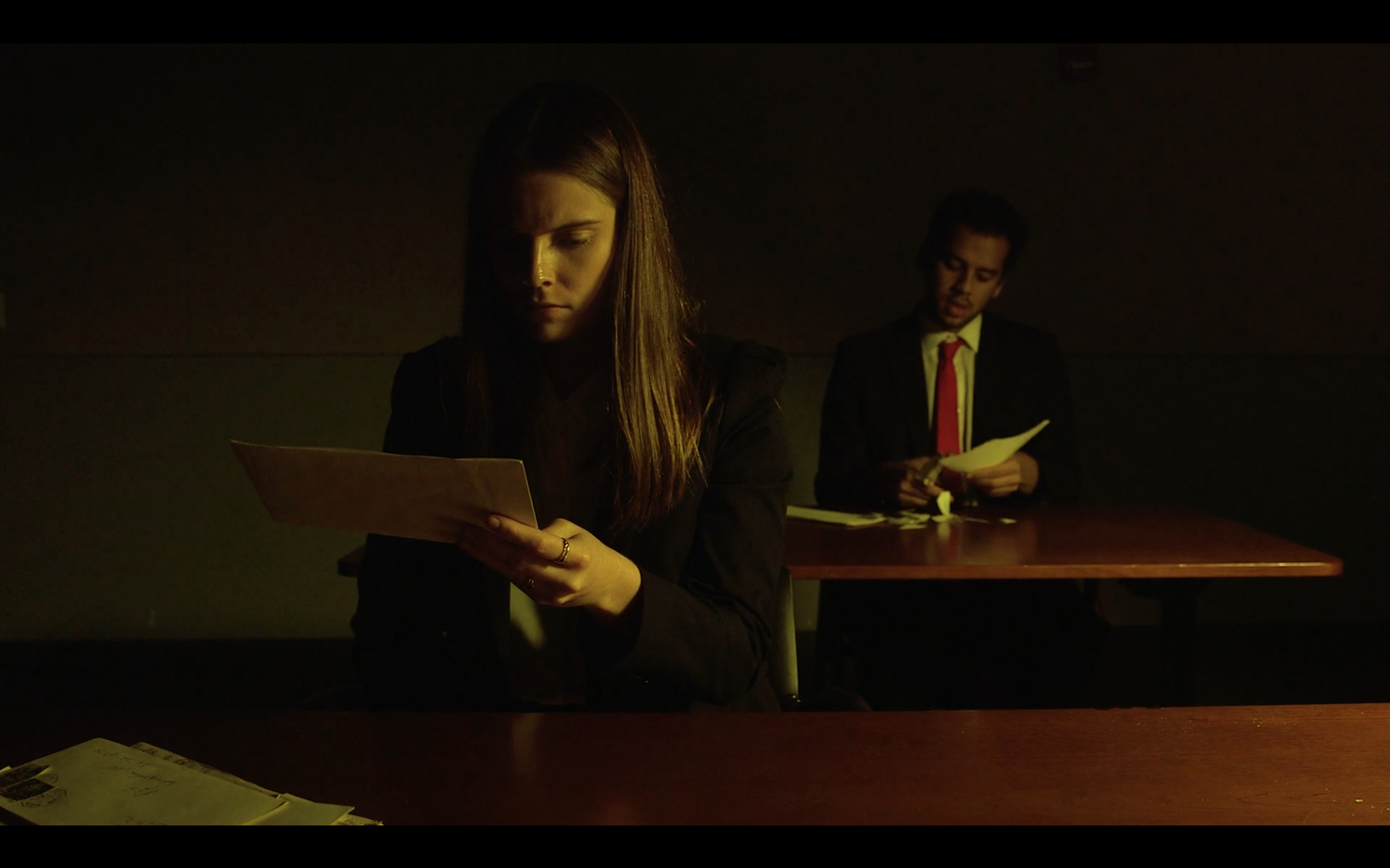 By Courtesy of Joule P. Voelz

In a post office where employees work all day to cut letters into pieces, a girl finds a letter full of hatred and is unsure what to do with it.

THC: Did the project start with a concept, a character, or a story?

Joule P. Voelz: I usually start thinking about films from images, so I was just really intrigued by a movie about someone who’s working in some sort of bureaucracy that’s never explained, but then having their own agenda. From there I just imagined what kind of characters I might find there, what they might do.

THC: Why did you choose a post office to be this bureaucracy?

JPV: Thinking back to when I was a kid, the post office was always a symbol of bureaucracy that moves really slowly and seems nonsensical. I was drawn to the idea of cutting off letters without any explanation of why this is happening, yet we accept it.

THC: Is there a message that the film tries to convey?

JPV: I was most interested in the idea of lack of communication, and at the same time also the idea of sending a message by an interesting medium, or having someone else send the message for you, which is kind of how the film ends. I’m interested in the different ways people communicate, and how things are translated and interpreted.

THC: It’s fascinating that the message that gets through in the film is one of hatred.

JPV: I think I’m interested in it because that’s not what you expect to see, and that’s the kind of message that often gets gobbled. I think it’s really funny if the only message that gets communicated is abject hatred.

THC: When you had the script ready, how did you envision the visuals of the film?

JPV: I wanted it to seem really clinical, and sort of lifeless in a bureaucratic way, so I was drawn to greens and yellows and not too much lighting. I was somewhat drawn to the images in “The Lives of Others.”

THC: Here on campus you are very involved in theater. Do you think your film is influenced by it?

JPV: I think so. I mostly do Harvard College Opera. When I direct a show and when I direct a movie, visual elements call out to me most. One day I really hope to have dialogues in my movies, but I’ve always been thinking about how to communicate information based on how things are placed, and how things are lit, and what’s the relationship. 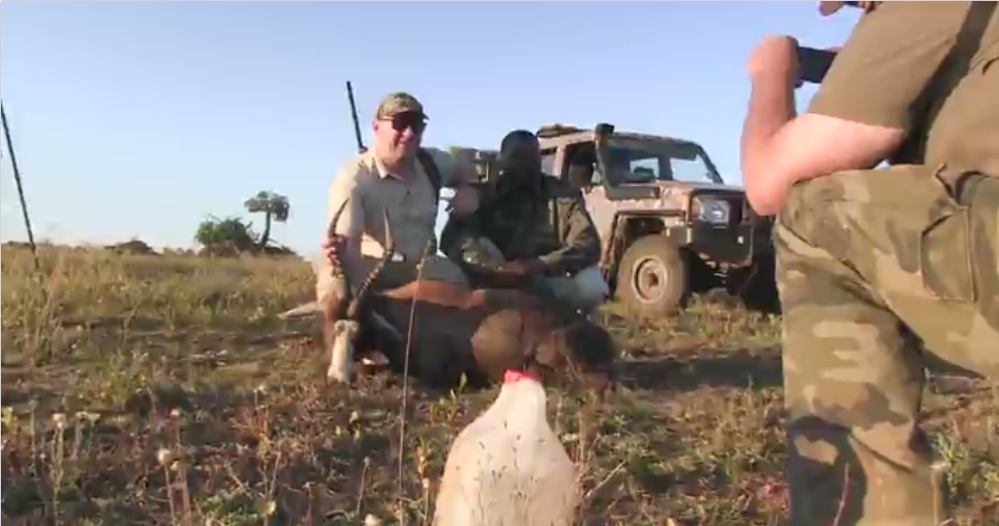 By Courtesy of Maryssa R. Barron

The film focuses on two hunting guides and a hunting client as they go hunting together.

THC: What drew you to your subject?

MRB: This is part of my senior thesis. I study social anthropology, and I’m writing about game hunting and how in South Africa in particular, it’s at the intersection between conservation, ecotourism, environmental governance, and issues like land ownership. Last year I met [the director of Harvard’s sensory ethnography lab] Lucien Castaing-Taylor. He was interested in my subject and helped me get a camera. It was my first time ever shooting film.

THC: Can you tell us more about what’s at stake about game hunting in South Africa?

MRB: Long story short, eighty percent of wildlife conservation in South Africa relies on privately held land. For most farmers, there needs to be economic values to the animals in order to encourage people to keep them on their land. Part of the animals’ value is classic photographic safari, but the other aspect is that there’s a large game hunting industry. It has been proven in several different studies that there does need to be this section of recreational hunting… and if these game hunts aren’t economically viable, we’ll end up not having as much land for conservation.

THC: Did you encounter any difficulty in getting consent from your subjects?

MRB: No. I am from the South… from an area where there are a lot of deer hunters. I came to this topic in part because of the lion event, where a lion was killed a couple summers ago, and people freaked out on Facebook. There was an overwhelming vilification of these hunters that didn’t understand. I knew that hunters believe in conservation and are not amoral characters. So I really sought to find out why people are so quick to condemn it and why it still continues. I didn’t really have difficulties [getting consent] because I positioned myself as someone who wants to problematize the overwhelming public opinion that what they are doing is bad, because it’s just not backed by conservation science at all.

THC: What’s your understanding of the concept of sensory ethnography?

MRB: Sensory ethnography has many interpretations depending on who is approaching the subject. A filmmaker will definitely approach the subject differently from an anthropologist, and what’s interesting about the class is that they do strive to make it half film students, half anthropology students. It is a way to present an idea with an experience that I don’t think I can do discursively. For me it means not only a way to represent my own experiences, but also a way to make it accessible to an audience beyond those that will read my thesis. I really focus on the ethnography aspect of the film, meaning emphasis is placed on spending a lot of time with subjects in order to better empathize with their practices, or at least understand them better than if you were just there filming for one day.

—Staff writer Tianxing V. Lan can be reached at tianxing.lan@thecrimson.com.