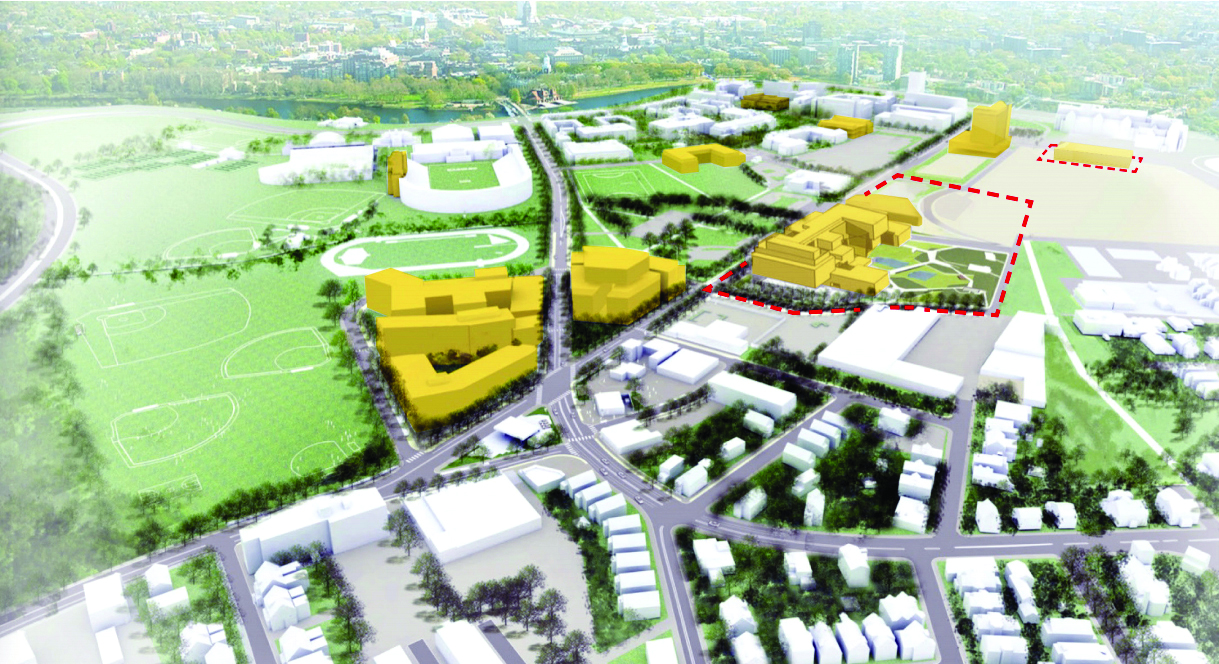 A rendering of the buildings, in yellow, of Harvard's master plan for its Allston project. The new SEAS complex is outlined by the red line.
By Jonah S. Lefkoe and Hannah Natanson, Crimson Staff Writers

Over the last two weeks, the Boston Redevelopment Authority has published two online amendments to Harvard’s Institutional Master Plan, the University’s blueprint for its Allston developments.

Harvard will take a three-pronged approach to the construction of the new SEAS complex, where roughly two-thirds of the SEAS faculty are slated to move in the fall of 2020. Over the next few years, Harvard will construct the new complex on Western Ave., renovate an existing office building next door for use by SEAS, and erect a district energy facility slated to supply electricity and hot and cold water to the complex.

A rendering of the buildings, in yellow, of Harvard's master plan for its Allston project. The new SEAS complex is outlined by the red line. By Courtesy of the Boston Redevelopment Authority

The energy facility will be located on a Harvard-owned land parcel formerly home to CSX Transportation’s railyard operations. CSX, a railroad company, ceded full development rights for the site to Harvard in December.

The second amendment gives new details on Harvard’s Life Lab, a biotechnology research and entrepreneurial facility scheduled to open in the fall of 2016. The report estimates construction costs at $17 million and designates the Life Lab, along with the adjacent Harvard Innovation Lab, as the future site of an annual Allston-Brighton ice cream social.

“The science and engineering complex and HBS’ life lab… have greatly benefitted from feedback from the community thus far and we appreciate the opportunity to share updates and responses,” Harvard spokesperson Brigid O’Rourke wrote in an emailed statement.

The updated plans include three new streets, a series of connected parks termed a “Greenway,” and improved bike infrastructure. Harvard gave no specific timeline for construction of the Greenway—planned to connect various Allston parks and provide walking access to the Charles River—but instead discussed future planning concerns and “design issues” for the pathway.

A group of Allstonians has recently advocated for a recreational path for bikers and walkers connecting their neighborhood with Harvard and the Charles River, particularly in the wake of the Turnpike realignment project slated to begin in 2017.

Allston resident Galen M. Mook expressed frustration with what he termed the University’s “piecemeal” approach to the Greenway.

“I believe both the neighborhood and the university would be better served if the pathways were made a priority and fully planned and built at the onset of the construction,” Mook wrote in an email.

Mook, along with fellow Allstonian John Eskew, also voiced concern over the University’s proposed bike infrastructure, emphasizing issues of biker safety and the need for a bike path connecting Harvard’s campus to the Allston neighborhood.

“I'd like to see Harvard take a hard look at North Harvard Street and implement physically separated bike lanes where possible, to connect Barry's Corner up to Harvard Square,” Mook wrote.

Eskew said that Harvard should be especially desirous of constructing a bike lane on North Harvard St. as a more direct connection between Harvard Square and the SEAS complex.

“Harvard students themselves are going to need to transport themselves from main campus over to that building in Allston,” Eskew said. “I would think that Harvard would… want to include some kind of physical barrier protecting bikes from the car traffic on those roads, just because of students’ safety.”