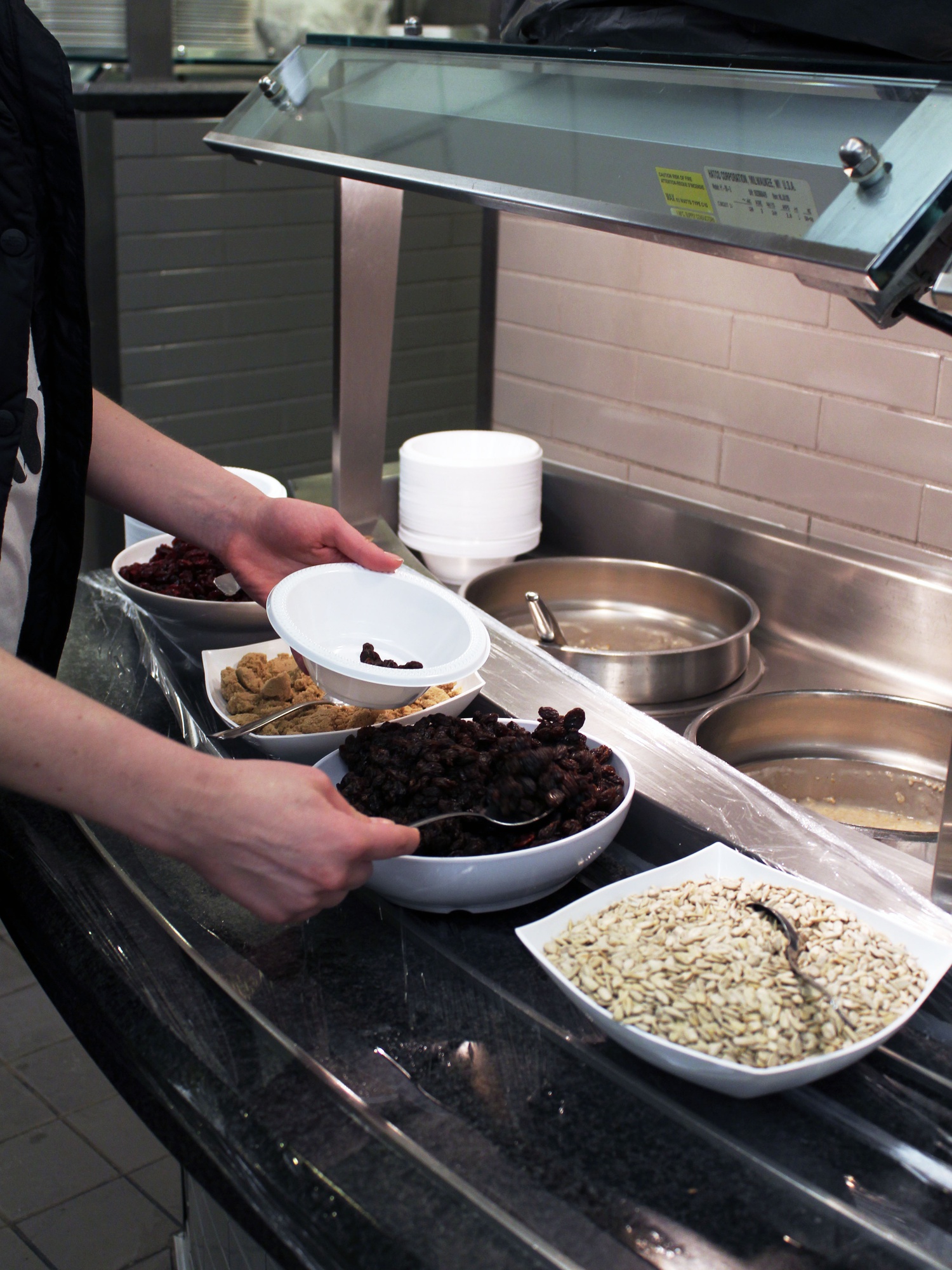 A freshman student helps themselves to oatmeal at Brain Break in Annenberg Hall Tuesday night. Oatmeal and a variety of other foods have been added to the Brain Break selection for freshmen this semester.
By Michelle J. Hu and Ignacio Sabate, Crimson Staff Writers

Freshmen came back from winter break to discover that Annenberg Hall had a few new additions to its late-night snack service for students—namely, expanded hot meal options and later closing times.

The service, called "brain break," had already been around for some time but has gone long without significant changes or improvement. Recent changes spurred by the Freshman Dean’s Office and the Undergraduate Council expanded the program’s offerings offered to freshmen.

“We wanted students to get more sustenance from their food and spend more time with their classmates,” said UC Freshman Representative Jack K. Kelley ’19.

The program has also expanded its food offerings, according to Torey E. Martin, an administrator at the Freshman Dean’s Office. Fresh fruit and other cold options are available on Tuesday nights, while hot options—such as pancakes, waffles, grilled cheese, and chicken fingers—are available on Thursday nights.

“Before the offerings were very limited and people weren’t turning out in great numbers; now there’s more interest in students that have gone and expressed real appreciation,” Interim Dean of Student Life and Dean of Freshmen Thomas A. Dingman ’67 said.

Some UC representatives argued that the hourly changes will better resemble a late-night culture of dining halls in the Houses.

“Upperclassmen have their dining halls open to them, stocked with food, later at night. If we were to bring more food to freshman brain break, it would be opening up opportunities similar to those at upperclassmen houses.” said UC Freshman Representative Scott Xiao ‘19.

Overall, the administrators hope the changes to Brain Break will expand the role of Annenberg as not only a freshman dining hall, but also a space to decompress, Martin said.

“I hope that students will see it as an opportunity to take a break from studying, have space to be with their classmates, and take a breather to get out of their dorms,” Martin said. “It’s important for all aspects of your first year for students to take a pause.”

Many students welcomed the new changes, particularly the introduction of more food offerings. Others enjoyed the concept of later open times, which resonated more closely with their day schedules.

“Any hot food is always good,” Thomas A. Lee ’19 said. “Especially because I feel like with a busy schedule it’s a two meal day and brain break adds another option for more food.”

Enhanced options form part of a larger push from the Freshman Dean’s Office to increase programming opportunities for freshmen to expand social networks, according to Dingman.

“If a lot of people are coming to Brain Break, hanging out, and getting food, it helps to create a cohesive freshman class. That was a huge motivation for HUDS and FDO to support us in this mission.” said UC Freshman Representative Catherine L. Zhang ’19.