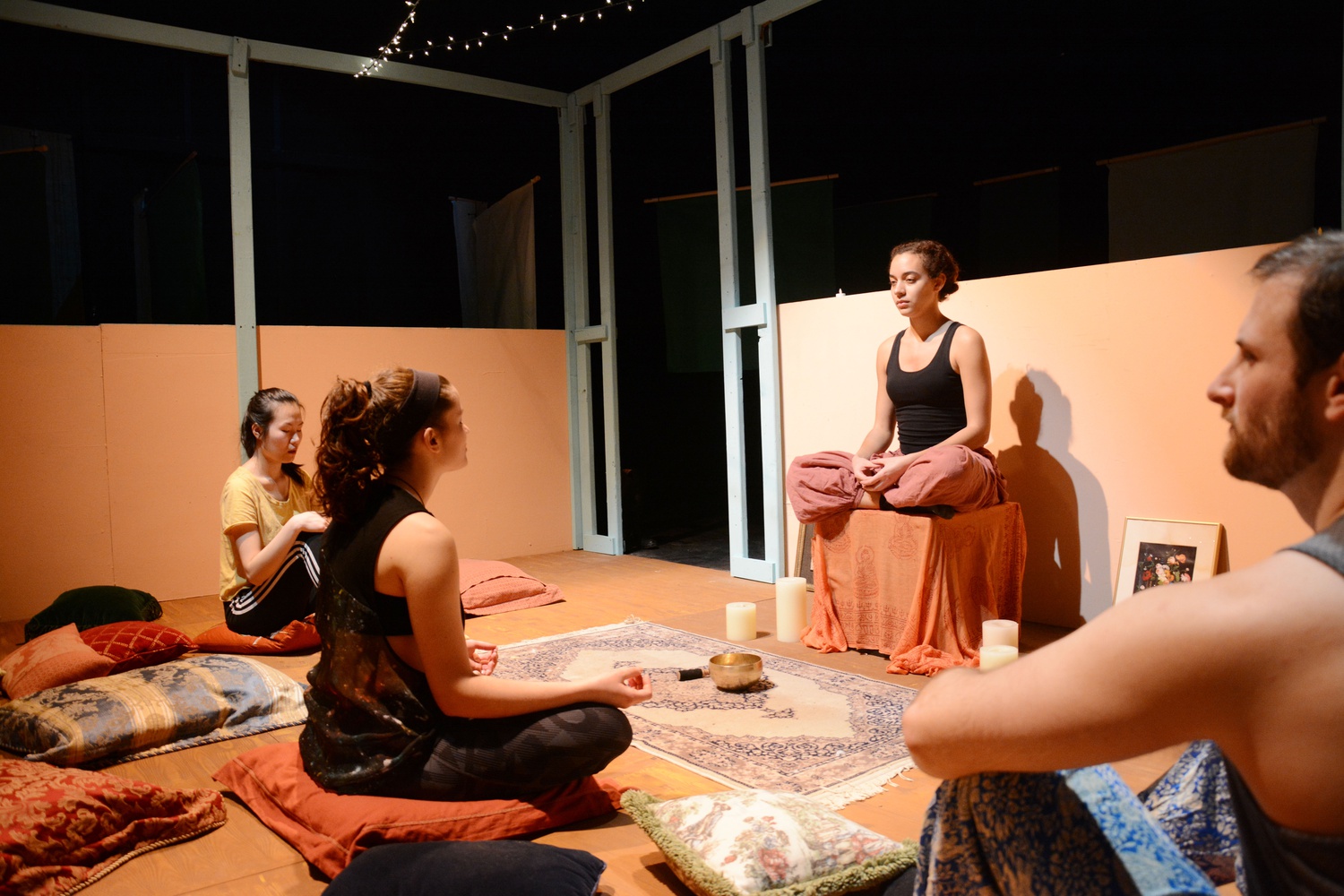 “E X I S T,” so styled, is something else. Following her failure to obtain the rights to “Small Mouth Sounds,” Elizabeth B.H. O’Donnell ’17 assembled an original piece of, well, something. Theater probably isn’t the right word, since even the biggest shaggy dog story of a play has some kind of narrative movement. Performance art might be closer. Something contrived or constructed is performed, at any rate. Whatever it is, it can’t really be reviewed, or at least not by me.

I guess it makes the most sense to try to break down “E X I S T” in a factual kind of way first. “E X I S T” is one of those self-styled immersive experiences with that totalitarian expectation of audience participation. With this in mind, attendees are compelled to remove their coats and shoes at the door before entering the theater. The arrangement of the theater itself (one cannot say the stage, because there is no stage proper) is at least striking: a well-lit central open box of sorts with a wood floor and a waist-high partition, large enough to fit roughly thirty people comfortably, surrounded by a fairly broad avenue that is punctuated with linen banners hanging from the ceiling. If nothing else, the set makes full use of the Loeb Ex’s space.

Audience members find comfortable altitudes in the box, which is strewn with pillows and a few benches. Aislinn E. Brophy ’17 acts as a meditation leader; Hanna E. Psychas ’17 is a late-comer to the meditation. After the exercise, Brophy asks if there are any questions; Eliza B. Mantz ’18 and Thomas W. Peterson ’18 both stand and deliver impassioned outbursts about whatever dissatisfactions are in their lives or their characters’ lives. (It is always unclear in “E X I S T” what is fiction and what is just stylized reality.) Following this, cast members take audience members out of the box singly or in pairs until only Brophy remains in the box. Audience members are then led or dragged on an eccentric pilgrimage between miniature performances, which generally involve cast members talking about their (or their characters’) private miseries or problems. This period of peregrination culminates in an induced dance party back in the box.

That’s a rough summary of what happens. Now it’s time to evaluate, and that’s hard. Criticism, especially theater criticism, relies first of all on a roughly coherent external text that can be evaluated by semi- or pseudo-objective standards—at the end of the day, you can say with some semi- or pseudo-objectivity that it’s good art or it’s bad art. The critic responds to the play as he would respond to an argument, by judging in affirmation or rejection through reason. Reviewing “E X I S T,” however, is a bit like reviewing a roller coaster or a tent revival. The thing’s conceit is drawing the audience into its own world with its own logic. The critic is faced with two choices. On the one hand, he can hold himself off from the experience, seeking to turn himself more than ever into a great objective angelic eye. This approach is pretty honest but threatens to destroy the thing being reviewed, which is by its own self-definition experience-based; it raises the question if the reviewer taking this approach is even qualified to evaluate, since he may not even be able to apprehend the aesthetic thing that is notionally under review.

On the other hand, he can throw himself into the experience, feel all there is to be felt, and generally suck the marrow out of the the thing that’s happening. When it comes time to sit down and write the review, he can now completely perjure himself in one of two ways: He can deny his own experience and proceed along the now spurious objective-seeming path, or he can write truthfully about the experience, in which case he is not really a critic, as he was himself by his own admission an actor in whatever occurred and so has forfeited any claim on objectivity.

My own natural and cultivated tendencies are in the angelic eyeball direction, so I stuck with the first approach. My findings were this: The actors perform convincingly. The set is well-made and original. The conceit is bold.

On the other hand, most of what happens seems pretty silly, in the ’60s-influenced hippy-dippy primal-screaming hangups-hungup psychobabble pseudo-mystical vein that I thought and hoped was all but dead outside Sedona. I think I can honestly say that even without the conscious effort towards the objective-angelic, the whole thing is simply unappealing to my own tastes. But at the end of the day, I can’t say with definitiveness that it was bad. I didn’t say “yes” to the experience, and so maybe there was some magic that happens there for the initiated that does not happen for the unbeliever.