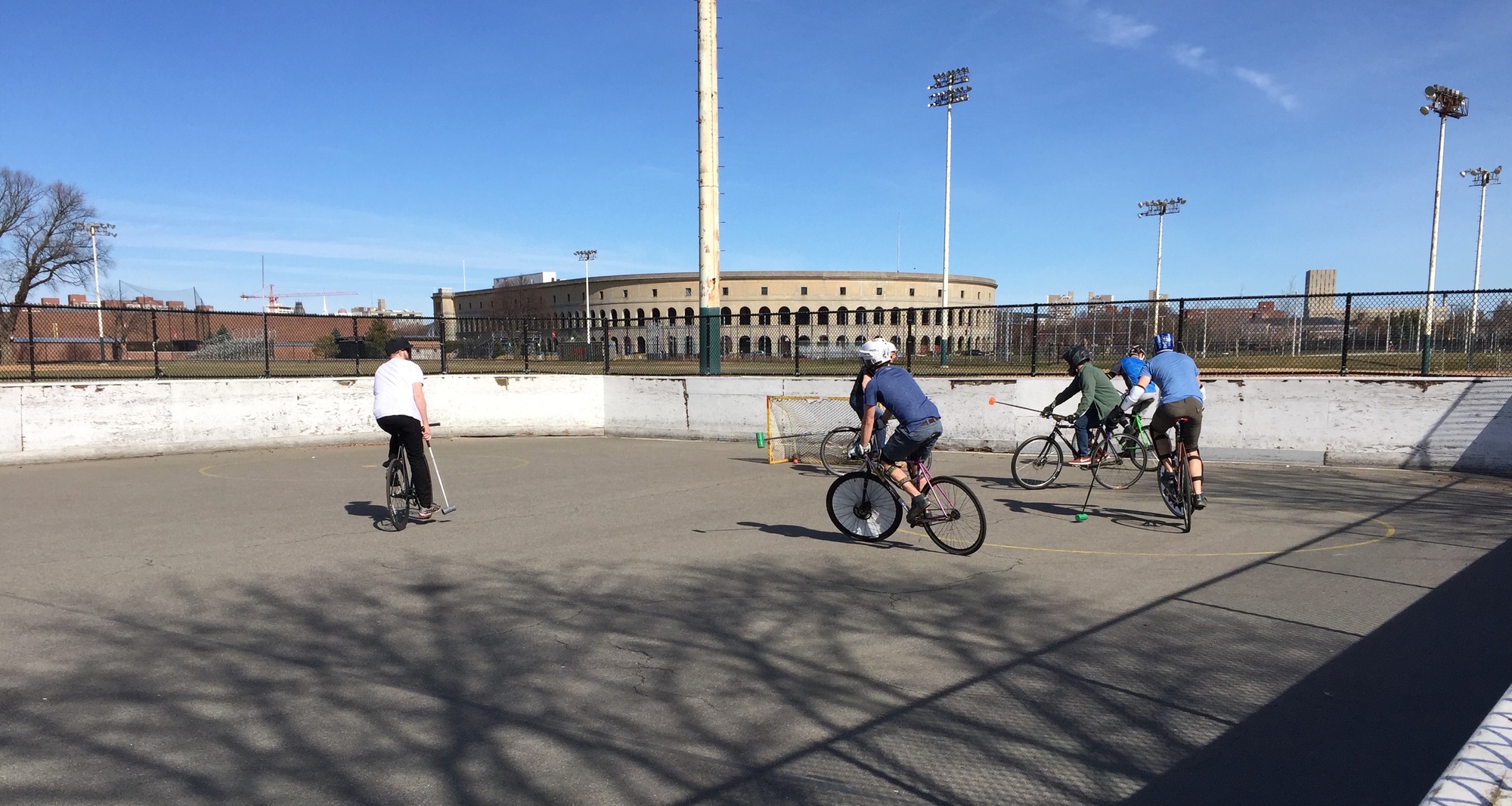 Not for the Faint Hearted

At first, only two men in their late twenties chat softly in the park, nursing beers as they stand by the hammocks. Slowly, more begin to arrive, bringing lime-flavored sports drinks, roommates, girlfriends, hard liquor shots, and bikes.
By Hannah Natanson

At first, only two men in their late twenties chat softly in the park, nursing beers as they stand by the hammocks. Slowly, more begin to arrive, bringing lime-flavored sports drinks, roommates, girlfriends, hard liquor shots, and bikes. Everyone has a bike. Some arrive riding one.

These are the members of the Boston Bike Polo club (slogan: “Slapping Balls Since 2006”). They have come to play hardcourt bike polo.

“It’s not for the faint-hearted,” one member, Conner Williams, says of the sport. Williams, who hails from Melbourne, Australia, is a fairly recent convert—he discovered hardcourt bike polo just three years ago. Some BBP members have been playing the game for nearly a decade.

Bike polo, traditional polo played on bikes, has existed for over a century. Hardcourt bike polo, the sport played on a hard surface, has only been around since 1999, when, according to the North American Hardcourt website, a band of Seattle bike messengers invented the sport to entertain themselves between jobs.

“It was a group of really gnarly dudes who lived on their bikes,” says self-described “bike nerd” and BBP member Addison Minott. “That’s what the sport evolved out of.”

Since then, hardcourt bike polo has spread across the nation and the globe. People in more than 30 different countries and 300 cities play the sport, and BBP’s Tobi Howell estimates that there are currently between 10,000 and 15,000 active hardcourt bike polo players worldwide. Williams, for his part, says the number is “uncountable,” citing would-be players’ high dropout rate due to the dangerous nature of the sport.

“The first time I played polo, I nearly lost both fingers on this hand,” Williams says, extending his arm and waggling the salvaged appendages. He admits this brush with serious injury was partly his own fault—he had had “too much to drink” prior to mounting his bike. 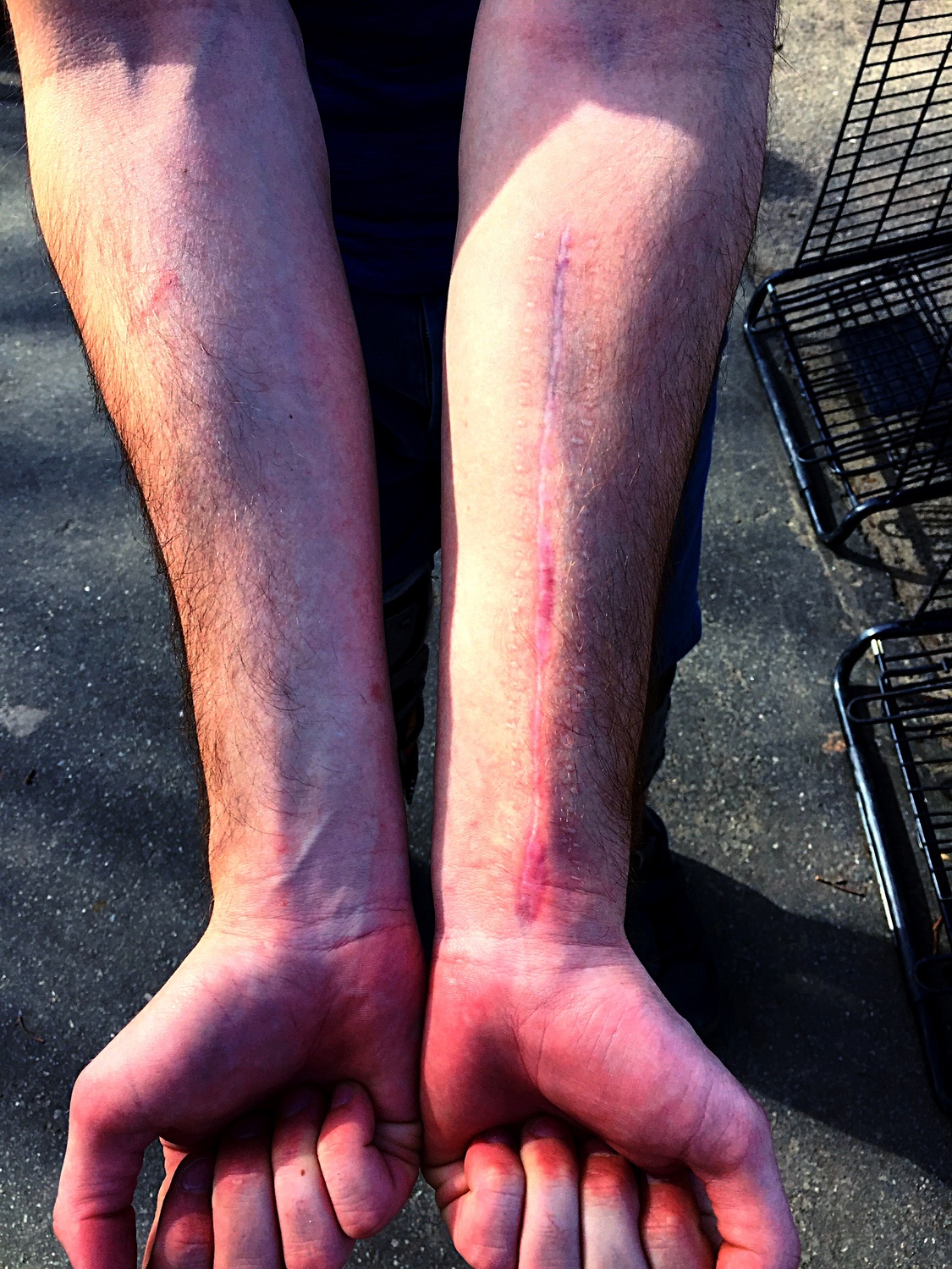 BBP member Jacques Chouinard displays battle scars from the time he “broke the shit out of my arm” playing bike polo. By Hannah Natanson

Undeterred by Williams’s tale, the BBP members continue to sip beers. In between swallows, the men ready the hockey court, removing the shopping carts and replacing them with small, metal goals painted orange. Eventually, four bikers spill lazily onto the court, mallets in hand, and begin a haphazard game.

Hardcourt bike polo is usually played three per team, but this is only a warm-up match, Howell explains. Playing two-on-two is “a lot more open and quicker,” he adds, though this game seems to be moving slowly.

The bikers sail around the court with confidence and ease, hitting the ball back and forth and taking the occasional shot at goal. Often, the players use the sides of the hockey court as a third man, knocking the ball against the wall to pass it to themselves or a teammate. One competitor glides past, a lit cigarette dangling from his lips, before stationing his bike in front of the goal to block an opponent’s shot from half-court.

The rules of hardcourt bike polo are similar to those of hockey, with one key difference: Bikers are not allowed to let their feet touch the ground. Thus, the men of BBP have become adept at sitting motionless on their bikes, a balancing act known as “track standing.”

“If you’re riding down the street on your bike, you’ll see people at stoplights try to balance,” Minott notes. “If any of us are at a stoplight we can just sit on our bikes all day long.”

Watching the players—who can stop, hop, and turn their bikes in one fluid movement—I find it easy to believe him. Many members have had years to practice; the group, which meets twice weekly and holds two large-scale tournaments a year, was founded in 2006 and moved to Smith Field in 2007.

“It’s in the armpit of Boston, as I like to call it,” Minott says of the hockey court’s location. “[But] this is our home, and we do whatever we can to take care of it.” BBP members regularly clean the park, clear litter from the area, and perform “unsanctioned repairs” on the hockey court’s boards, according to Minott. “We do it because no one else does,” he says.

The bikers have left their mark on Allston’s hockey court in more ways than simple fixes: Stickers displaying the logos of bike polo clubs from around the world adorn the metal posts that line the court. The stickers come both from players passing through for BBP’s biannual tournaments and from club regulars.

Howell points to a red-and-white sticker bearing the words “Good Owl’ Boys.” This, he says, was the name of his three-person team—made up of Howell, a biker from Seattle, and a biker from Geneva—that traveled to New Zealand last month for the World Hardcourt Bike Polo Championships. The group ended up placing in the top 16.

Howell is not the only BBP member to have competed on the international stage—fellow biker Javier Garcia-Albea previously traveled to France to play in the 2014 world championships. Despite the club’s success on the global level, members cite the local community as the primary reason for their continued participation.

“I think it’s the perfect combination of social and competitive sport,” Minott says. “It’s at your leisure: Come, hang out, have fun, drink a beer, and then get on the court and take out some anger from the work week.” Howell agrees, commenting that BBP is “like a tribe.”

Sujata Mulekar, girlfriend of biker Jacques Chouinard, notes the BBP community extends to members’ significant others. “We all hang out,” she says. “One of the players, Allen, had his birthday [a few days ago], so we were all at his house that night.”

Mulekar herself once tried hardcourt bike polo, but the attempt was short-lived because of her busy schedule as a medical school student. In general, BBP consists of mostly males, though one female competitor, Charlotte Fagan, plays regularly.

After pausing a moment, Mulekar looks down at her shirt, a grey tank top imprinted with the BBP logo that Minott designed. Stretching the fabric to better display the graphic—in which a blue-and-yellow version of the Boston Celtics’ mascot wields a polo mallet and ball—she smiles.

“This was my birthday present,” she says.