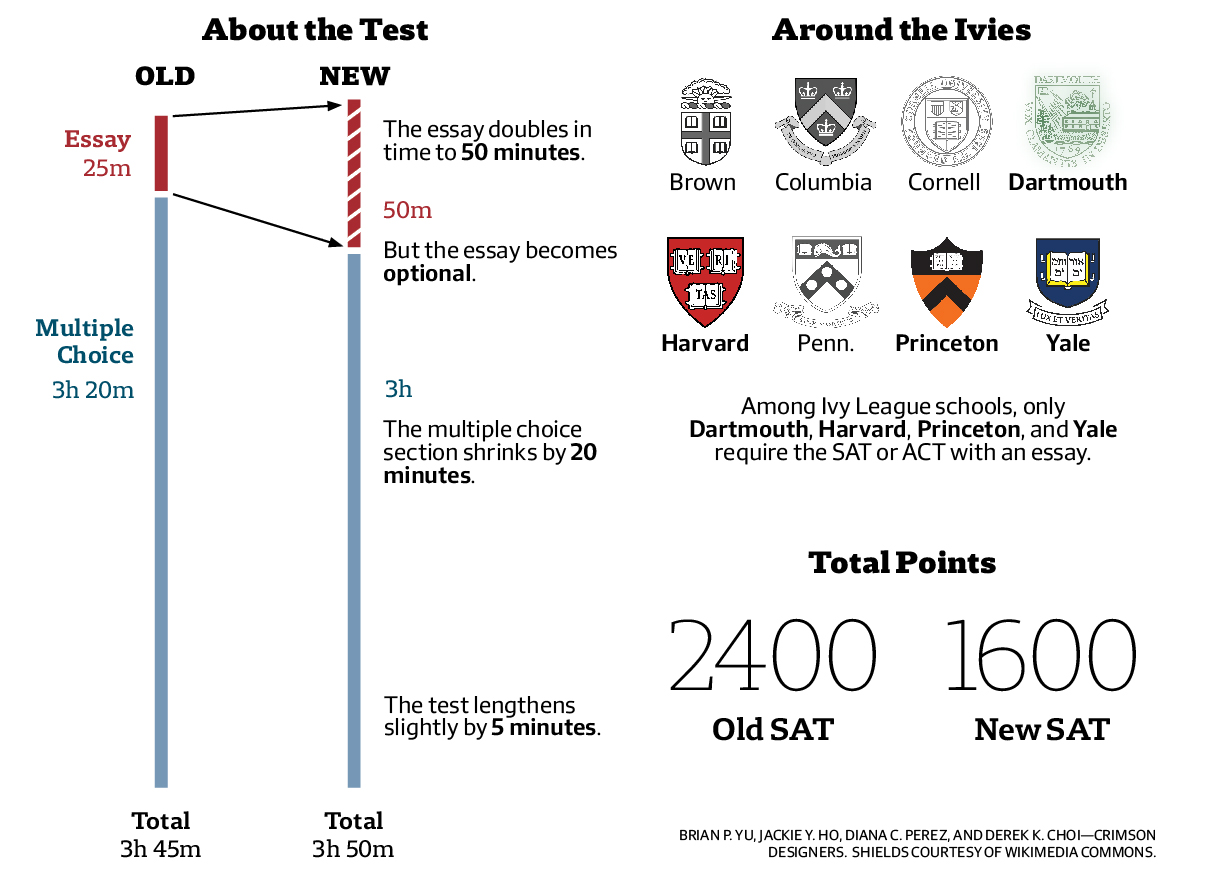 High school juniors across the country will sit down Saturday to a newly designed SAT test that the College Board has said will more closely reflect the knowledge and skills it believes are most indicative of a student’s success in college. The new test comes during a time of national discussion on the accessibility, predictive ability, and consequent future of standardized testing in the college admissions process.

Despite a growing shift towards test-optional admissions policies and decisions by peer institutions to no longer require the essay portion of either the SAT or the ACT, Harvard’s Office of Admissions and Financial Aid continues to affirm the role of standardized tests and their essay portions as useful measures of knowledge and ability.

Originally adapted from the World War I Army I.Q. Test in 1926, the Scholastic Aptitude Test has since undergone several redesigns, the most recent of which happened in 2005. The new test returns to the 1600 grading scale and features restructured sections—Reading, Writing and Language, and Math—that have fewer questions overall and more time allotted for each question. The essay portion is now optional and there is no longer a penalty for wrong answers on the multiple-choice portions of the SAT test.

The content of the test has changed dramatically as well. The College Board has placed emphasis on evidence-based questions and questions “grounded in real-world contexts” via the use of historical documents that relate to broader themes of history, social science, and the sciences. 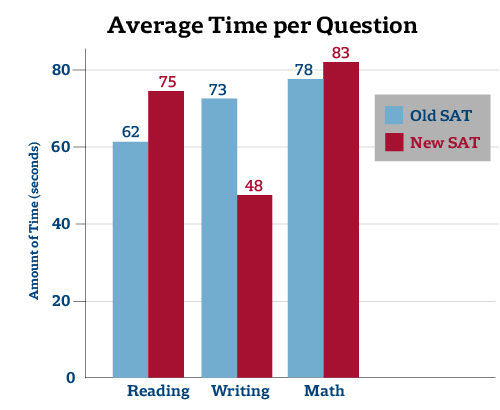 The test will incorporate what the College Board calls documents of the “Great Global Conversation,” including not only prominent documents in American history, such as the Federalist Papers and the Bill of Rights, but also speeches and texts by global leaders and thinkers, including Nelson Mandela, Mary Wollstonecraft, and Mohandas Gandhi. Excerpts of these texts will be included in the essay portion as well as in the Reading and Writing and Language sections of the new exam.

The new exam also features a reworked essay component. The optional essay portion of the test is 50 minutes long instead of 25, and it will have the same prompt for every iteration of the test. A literary passage will be provided, and the student will be asked to write an essay explaining how the author of the text constructs a persuasive argument.

The changes to the SAT address concerns that the test does not adequately reflect high school curricula and that it can be gamed with memorized answers and pre-made formulas. Alyssa B. Frank, Director of the Schawbel College Resource Center at Boston Latin School, praised the test’s content changes.

“I get the sense from the conversations that I’ve had in the field of the College Board, that it’s going to be harder to game the new SAT... because it’s supposed to be more aligned with the things students are learning in the classroom,” she said in an interview last semester. “So it’s going to be less a measure of this abstract idea of intelligence and more a measure of critical thinking as it relates to math and writing.”

The other predominant standardized test, the ACT, has also recently changed its essay. Students are now asked to present their ideas on a current world issue in relation to three alternative provided perspectives. The new version was offered starting in September. 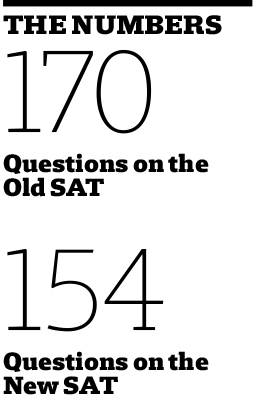 The changes to the SAT and ACT tests come during redesigns of the Common Application as well as during talks of a new college application tool, producing anxiety among high school students and their parents, Frank said.

“The fact that students have to adapt to this at the same time they’re dealing with constant changes to the common application—that’s a lot for students to handle.”

Despite the changes to the ACT essay and the upcoming changes to the SAT exam, Harvard’s peer institutions, including the University of Pennsylvania, Cornell, Brown, and Columbia, have dropped the SAT and ACT essay requirements from their application processes. Harvard, however, will continue to require the essay scores and will conduct its own analysis of the predictive quality of the exams their essay components in relation to students’ academic performances at the College.

In an emailed last semester, Harvard College Dean of Admissions and Financial Aid William R. Fitzsimmons ’67 said the admissions committee will monitor the correlation of the new writing exam with students’ grades at Harvard for several years to better evaluate the relationship between the new writing test and students’ written work at Harvard.

“Because the previous writing test was one of many predictors of academic performance, we hope the new test may be helpful as well,” he said. “We also believe that it is very important for Harvard to take part in this experiment given the importance we place on writing.”

Speaking of the preparation of Harvard’s admissions committee for the new exam, Fitzsimmons said, “We are already making preparations to integrate the new SAT exam into our information systems. The College Board will provide a concordance table that will enable admission officers to equate the old and new tests.”

Anna Ivey, the former Dean of Admissions at the University of Chicago Law School and the founder of an admissions consulting company, suggested that the new test may complicate the admissions process for administrators since the content and structure of the exams are so apparently different.

“If you’re actually trying to track data over time and have meaningful conclusions, that’s hard to do when you’re not comparing apples to apples,” she said.

Parke P. Muth, a former admissions dean at the University of Virginia who now runs a college consulting business, noted that in situations in which admissions officers evaluate similar applicants, test scores may be determining factors even at test-optional schools.

Test-optional admissions policies and the new standardized tests, however, do offer students valuable choices in their college application processes, according to Ivey. “The benefit is that now students have more choice—they can decide to apply in a way that plays closer to their strengths.”

However, Harvard Graduate School of Education professor Daniel M. Koretz pointed out that test-optional admissions policies can be used more to the advantage of some colleges than to students. “It will help some schools in the US News and World Report rankings since obviously the stronger students, the ones with good scores, are the ones likely to submit their scores.”

Steven R. Goodman, a former member of the Undergraduate Admissions Advisory Committee at the University of Pennsylvania, also noted that even test-optional colleges are buying the lists offered by the College Board of the top scorers for recruiting and marketing purposes.

“What an incredible coincidence that these schools are going ahead and saying they’re test-optional and then buying the lists of the top scorers,” he said.

Despite changes in the SAT’s content and the College Board’s creation of a new test prep service with the online learning company Khan Academy in an effort to be more inclusive, experts still emphasized education and accessibility disparities.

Koretz classified test prep under two broad categories, one of which is a targeted approach to help students focus on their perceived areas of difficulty and the other which “capitalizes on the specific details of the test.” Of the latter kind, Koretz said, “What that kind of test prep does is undermine the value of scores…[producing] utterly fraudulent gains on the test.”

Khan Academy’s free test prep service, advertised on the College Board’s website, is available to anyone with access to a computer and claims to help students strengthen skills and deepen understandings of content through various learning aids.

Harvard’s Office of Admissions welcomed this new program, emphasizing its accessibility to a more diverse socioeconomic audience. “The College Board’s association with Khan Academy promises to provide additional support for students from all economic backgrounds who wish to prepare in advance for the new SAT,” Fitzsimmons said.

Connecting students with resources may still be a problem, though, Ivey said.

“I think that getting them on the radar of students who aren’t aware of those resources or who don’t come from background where parents are savvy about these resources is the challenging part,” she said.

Yet others, including Muth and Koretz, maintained that, while the new resources and the new SAT are positive changes, they will do little to address equity of access to higher education.

Muth explained that the new test and the newly available resources are not likely to make much difference in a student’s performance “if you don’t go to a great school and you haven’t had a lot of guidance before tenth grade.”

“The gap between wealthy and poor students is growing and quite rapidly and that shows up on test after test after test,” Koretz said. “So providing more equitable test prep for the SAT is not going to be enough to offset all that.”

“The test might actually be testing us, and the feedback we may be getting is that we need to rethink how we are social engineering around higher education,” Lake said. “If all that higher ed is really doing is validating that top percentage... we’re creating social stratification.”

“The idea of things like the SAT was to provide something that was basically identical for anyone who took it,” said Koretz. “So it got its impetus as a way of breaking the lock of the privileged whites on elite education, so it’s ironic that the argument against it is precisely the same.”