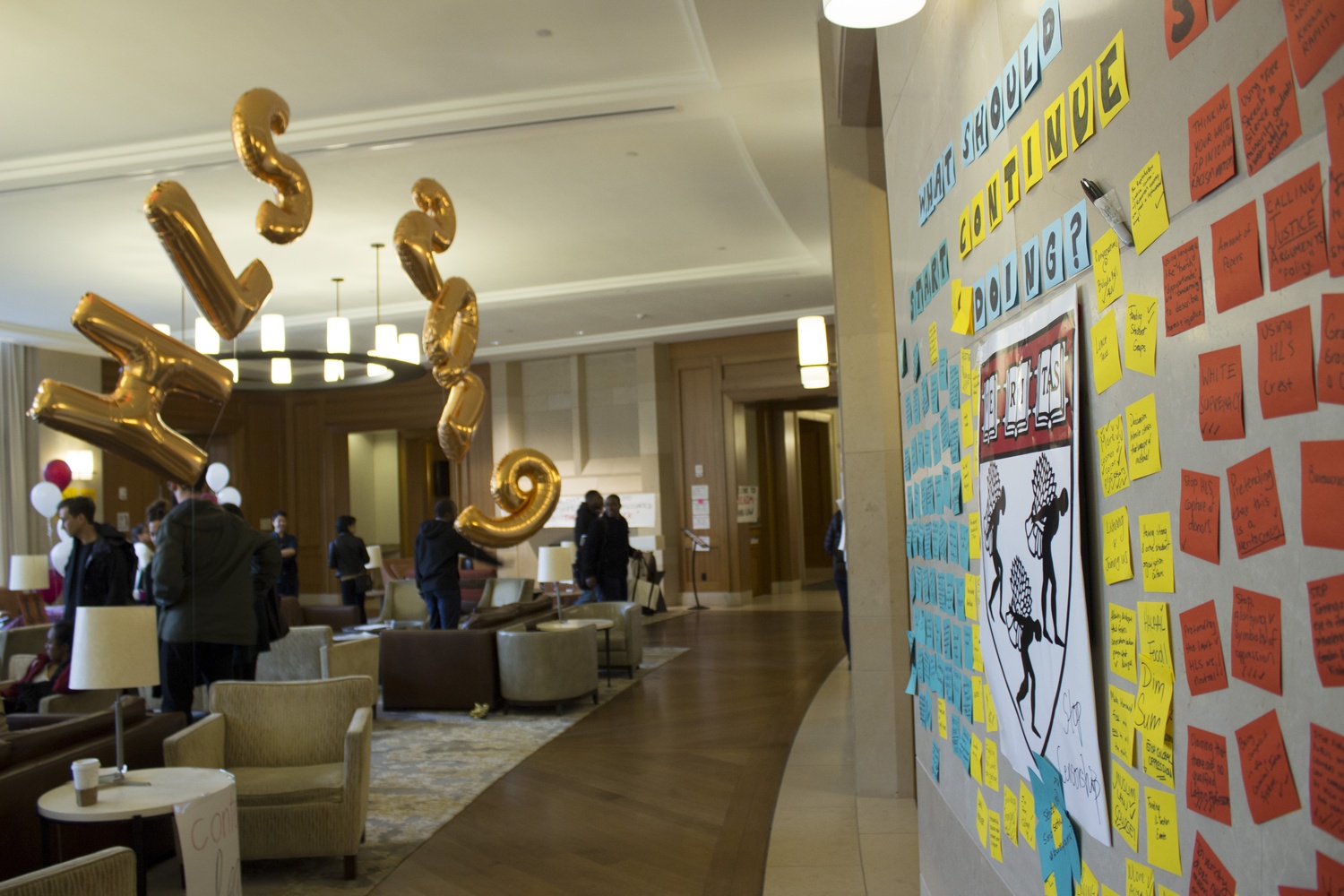 Harvard Law School administrators amped up security and amended school policies in response to an escalating debate about free speech that began with a confrontation over posters last week.

Students in the group Reclaim Harvard Law have occupied the Caspersen Center Student lounge—which they are calling “Belinda Hall”—since February to advocate for increased support for minority students on campus. Last Monday, third-year law student William H. Barlow, a vocal critic of Reclaim Harvard Law, posted signs in the lounge comparing the group to Republican presidential candidate Donald J. Trump, a move activists saw as offensive. Reclaim Harvard Law members removed the signs and told Barlow that they had jurisdiction over what could be posted in the space.

Barlow considered their action a violation of his right to free speech, and returned to the lounge each day for the remainder of the week to post signs with messages such as “Stand Against Censorship, Stand Against Reclaim.” Tensions flared Friday as a group of activists confronted Barlow while he affixed signs to the walls in a stand-off Barlow described as “volatile.”

The school filmed activities in the room Friday to ensure that students were complying with the policy outlined in their emails. Activists said they identified several undercover Harvard University Police Officers masquerading as admissions officers stationed in the hall watching Friday’s dispute play out.

“At the request of Harvard Law School administrators HUPD assigned two plainclothes officers on a paid detail assignment due to safety concerns,” Officer Steven G. Catalano wrote in an email.

The dispute also prompted administrators to revise the school’s poster policy, which states that authorized student groups are only allowed to place posters on designated bulletin boards—meaning that both Reclaim Harvard Law and Barlow were violating school rules.

But on Friday, Law School Dean Martha L. Minow sent an email to students amending the policy to establish the student lounge as a free speech zone open to all viewpoints.

“We will continue to make the WCC lounge available as a temporary space for the community to engage in speech,” she wrote. “But that space must be available to all who wish to use it for such expression.”

The morning after Minow sent her email, members of Reclaim Harvard Law entered the lounge to discover that several of their posters had been defaced with the words “stop censorship.” Since spring break, activists have not been sleeping in the hall and did not see the vandalism occur. Administrators declined to say whether they had identified the perpetrator. Several months ago, the school installed video cameras in Wasserstein Hall after a racially-charged incident of vandalism, but administrators did not place cameras in the adjacent lounge.

Barlow publicly denied any involvement in the vandalism in a post on his Facebook page. Reclaim Harvard Law expressed disappointment about the incident, but did not accuse any particular student.

Administrators have warily watched the events develop over the past week. Dean of Students Marcia L. Sells observed students debating in the lounge on Friday afternoon, and earlier that day, Minow herself visited the lounge. In her Friday email, she reminded students of the school’s policy against threats and violence.

In an email to Law School affiliates Friday, Minow warned that interfering with other students’ posters would trigger disciplinary proceedings. Sells reiterated this message following the vandalism incident Saturday.

“The Dean's statement yesterday made clear that defacing a sign posted by another is in the same category as removing or moving someone else's sign,” Sells wrote in an email to students. “The wall space in the lounge is to be shared, on equal terms, by all members of our community. Matters are being referred to the Administrative Board as appropriate.”

Amidt all of the discussion about the pragmatics of poster placement and removal, a broader debate about the meaning of free speech and inclusion has emerged.

Activists said they can control speech in the room because they are occupying the hall and designating it a make-shift office of diversity and inclusion. Therefore, they argue, they have the right to remove signs they consider to be offensive.

“This is a place made for inclusion. Inclusion doesn’t mean that you let everything that anyone wants go up,” Bianca S. Tylek said. “Inclusion means protecting from exclusion.”

Activists have launched their own postering campaign under the premise “free speech is not neutral,” arguing that the Law School has historically silenced minorities and Barlow’s campaign about free speech is an attempt to stifle conversation about their demands.

“All of a sudden this is a distraction from that,” Reclaim Harvard Law member Titilayo S. Rasaki said. “To change the conversation...[is a tactic] that has been deployed at this institution and schools around the country to silence the voices of students of color when they are challenging substantively what’s going on in their institutions.”

Barlow and supporters, however, view the lounge as a public space where any student has the right to express their views freely. In their opinion, activists’ attempts to regulate signage amount to censorship.

Students have taken to the pages of the Harvard Law Record to weigh in on the debate. The poster dispute has soured several students on the Reclaim Harvard Law movement, which they say they initially supported but now disapprove of activists’ tactics. Marlen Thaten called the movement “authoritarian” in a Record piece, and third-year Law student Stephen M. Silva said activists’ tactics have created a “pervasive” silencing effect on dissenting speech at the school.

“They decided they’re going to stifle, basically, any other ideas people are going to say,” Silva said in interview. “I think it’s very unfortunate because they have some very good ideas.”

Barlow has said he will likely stop mounting signs, as he feels he has made clear his argument. Activists, on the other hand, said they are looking to broaden their postering efforts. Because administrators adopted “Belinda Hall” as a temporary free speech zone—using the boundaries activists had drawn for their occupation—Tylek said Reclaim Harvard Law might expand its physical reach.

“Perhaps we will think about redrawing our lines,” Tylek said.