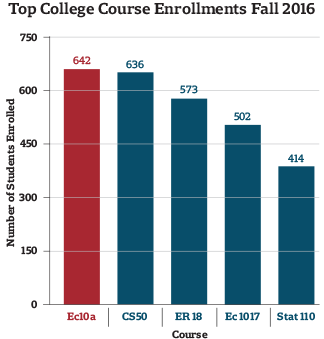 In the battle for Harvard undergraduates, enrollment numbers from this semester may show Wall Street still has some clout over Silicon Valley.

According to data released by the Faculty of Arts and Sciences Registrar’s Office on Sunday, 642 undergraduates are currently enrolled in Ec 10a this fall, just six students more than the 636 taking CS50.

However, when graduate and other non-undergraduate students are counted in the tallies, CS50 enrolled almost 50 students more than Ec 10a, totalling 702 and 647 respectively. Ec10 has traditionally been the College’s most popular fall course, although CS50 did outpace it in 2014.

The third most popular course was the perennially popular Ethical Reasoning 18: "Classical Chinese Ethical and Political Theory,” with 567 undergraduates and a total of 572 students.

Chinese history professor Michael J. Puett, who this semester is teaching ER 18 for the seventh time, said while introductory courses in economics and computer science give students a foundation for future study, materials in his class delve into topics that relate students’ lives outside the classroom

“It’s a great way for students to—during this formative period—rethink a lot of their basic assumptions about how they live their lives,” Puett said.

The College’s fourth most popular course, Economics 1017: “A Libertarian Perspective on Economic and Social Policy,” saw a significant jump in enrollment to 497 undergraduates from 251 undergraduates last year. Economics senior lecturer Jeffrey A. Miron, who teaches Ec 1017, attributed the course’s jump in popularity to the current election cycle, which has seen Libertarian presidential candidate Gary E. Johnson in the spotlight and rising in the polls.

Miron said topics in the course, like the immigration policy and the legalization of drugs in the context of economics, have attracted students during this year’s presidential campaign—which has featured candidates with significantly varying styles and ideologies.

“These are all things that are discussed actively in the political stage, and I think lots of people are interested to be hearing different perspectives,” Miron said.

Statistics 110: “Introduction to Probability” maintained its place from last year as the fifth largest course in the College, with 414 undergraduates.

“It’s been increasing, steadily growing every year,” said Statistics Professor Joseph K. Blitzstein, who has taught Stat 110 every year since 2006 except during his sabbatical.

Blitzstein credited the general increasing popularity of statistics for the growth of Stat 110.

“I think the interest in statistics is growing a lot because there’s a growing recognition that everywhere in the world where there’s randomness or uncertainty or data, you need statistics,” Blitzstein said.

A previous version of a graph association with this article implied that the course LS1a is the fifth highest enrolled in the College. In fact, that is Stat 110.