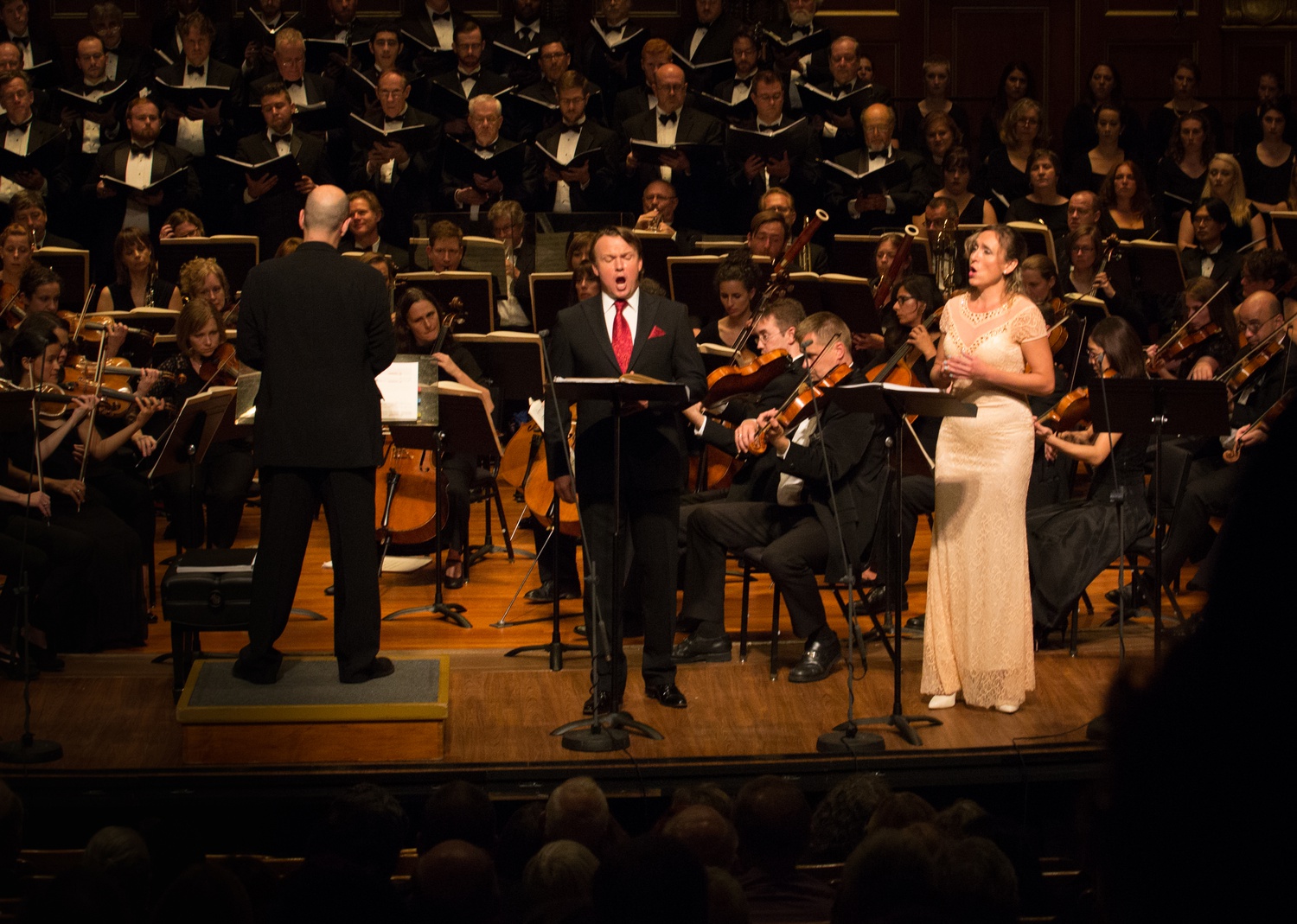 In a one-night-only performance of Antonín Dvořák’s grand opera “Dimitrij” on Sept. 16, the chaos and despair of tsarist Russia took over the New England Conservatory’s Jordan Hall. While director Gil Rose’s decision to stage the three-and-a-half-hour opera for a contemporary audience tested the endurance of even the most seasoned opera enthusiasts, the performance nonetheless tugged at all the right heartstrings and struck just the right tone in what was ultimately an artistically impressive performance of “Dimitrij.”

Based on the true story of the impersonation of the assassinated son of Ivan the Terrible in 1605, “Dimitrij” is a tale of love and power. It begins in the aftermath of the death of Tsar Boris Godunov, with the Russian state desperate and tsarless. Enter Dimitrij (Aleš Briscein)—the self-proclaimed son of Ivan the Terrible—and Marina (Dana Burešová), his ruthless and proud Polish bride. Much of the first act surrounds the uncertainty about Dimitrij’s identity, which is ultimately confirmed by his would-be mother Marfa (Irina Mishura). Once Dimitrij becomes Tsar, tensions begin to emerge in the royal marriage that mirror those between Russians and Poles. Just as the love between Dimitrij and Marina begins to fade, the false tsar saves and charms the beautiful Xenie (Olga Jelínková), daughter of the late Godunov. The rest of the opera follows this love triangle as Dimitrij’s marriage disintegrates and jealousy drives Marina to murder Xenie, leaving Dimitrij to confess his wrongs and face execution accordingly.

To be clear, the four-act grand opera is not for the faint of heart. Conversations between characters extend for 40 to 45 minutes and yet can be summarized in a sentence or two. Suspense builds and builds and is ultimately broken, but there are times when the sheer length of the opera tests the limits of a modern audience’s attention span. The trend among contemporary operas has been to condense their lengthy source materials in order to accommodate the changes in the makeup of their audiences. One is left to wonder whether or not Odyssey Opera would have benefited from such a revision of Dvořák’s libretto, especially considering the fact that curtains rose at 7:30 P.M. Indeed, there were multiple instances throughout the performance in which dialogue verged on the redundant, suggesting that perhaps director Gil Rose would have been well-advised to streamline the interactions for the sake of fluidity.

With that said, the performance was often not only impressive but even stunning. The first overture crescendoed as the brass added a discordant desperation to complement the sadness of the strings. The chorus set the tone of a Russia in virtual ruins before the entrance of the solemn yet charismatic Dimitrij. Briscein’s rendering of the title role was effortless; the native Czech tenor imbued his character with the dignity and strength that makes him so complex. His performance was supplemented by those of the female leads (Burešová and Jelínková), who served as foils to one another—one strong and ambitious and the other melodious and graceful. The actors all took the stage with opera in hand and read from music stands, but the lack of staging was not necessarily amiss, as it allowed the music to deliver the pathos.

The tendency toward minimalism extended even to the actors’ dress. While this aspect of the opera was unremarkable at first blush, since all the performers wore suits and dresses rather than costumes, the color scheme nonetheless related a rather telling narrative. In fact, the only actors who wore anything with visible color were the three leads, and each color choice was clearly carefully made. Dimitrij wore a red tie that symbolized his passion and strength. Marina’s golden shawl characterized her lust for power. Xenie’s blue dress underscored her natural purity: She was the only person on stage who did not wear anything black, a fateful omen of her ultimate death. These wardrobe choices, while small, often served to trace the opera’s emotional arc.