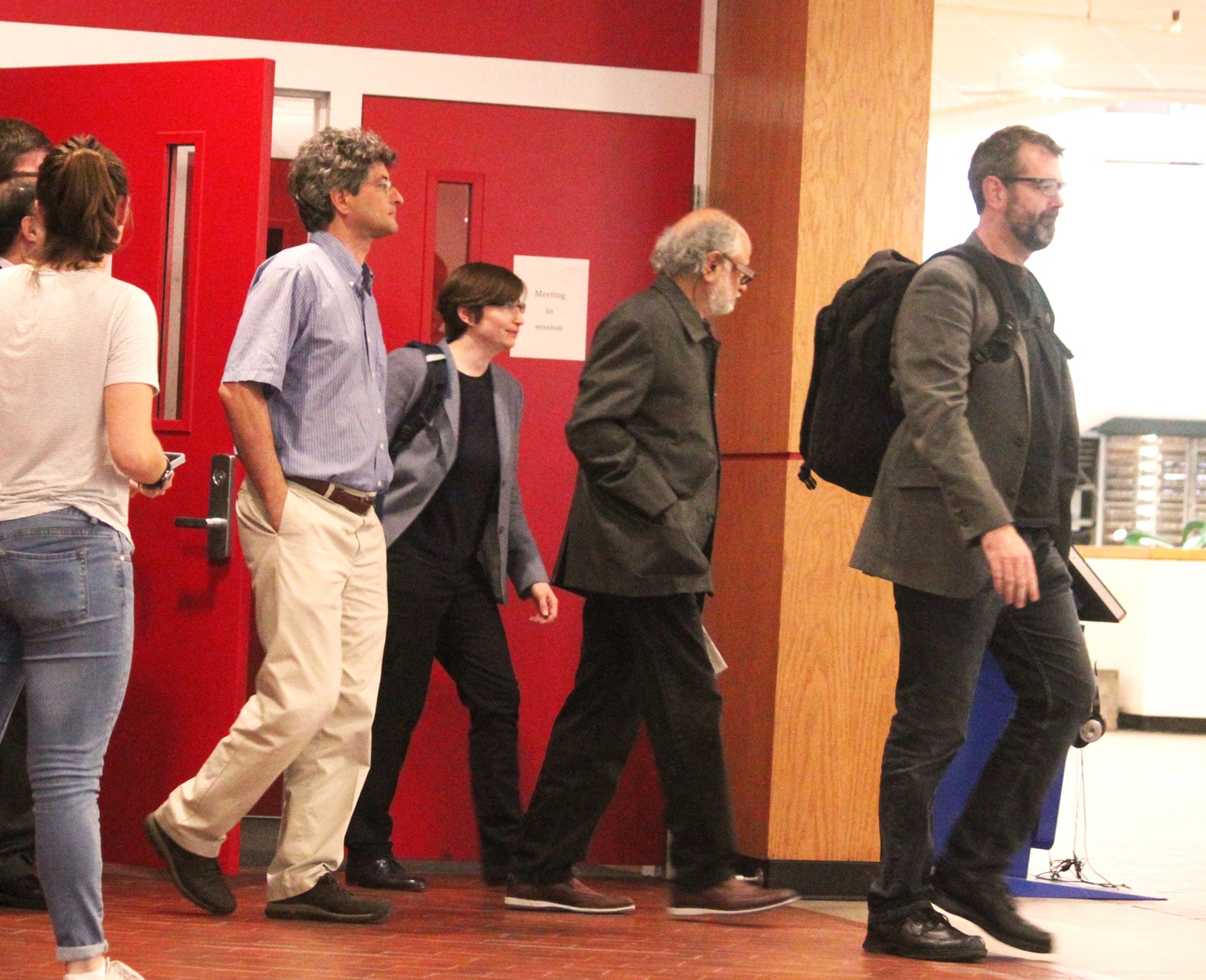 Faculty members discussed the sanctions on single gender organizations and the case of Michelle Jones in a meeting in the Science Center on Tuesday. By Casey M. Allen
By Joshua J. Florence and Mia C. Karr, Crimson Staff Writers

At the Faculty of Arts and Sciences’ monthly meeting Tuesday, professors did not mince words describing Harvard’s unrecognized social organizations.

But the ongoing administrative effort to curb the presence of fraternities, sororities, and final clubs on campus also drew ire, as faculty rebuked the effort in turn as “imprudent,” “draconian,” “repressive,” and a “clumsy virtue-signal.”

Since University President Drew G. Faust announced a historic policy on final clubs and Greek organizations in May 2016, faculty members have hotly debated the policy in their monthly meetings. Filling Science Center C on Tuesday, they appeared no closer to consensus.

A week prior, the Faculty Council—the highest governing body of the FAS—provided non-binding advisory votes on each motion, voting down the Lewis motion 16-2 and affirming the Allen motion 17-0. The full Faculty will not vote on either motion until November at the earliest.

The committee’s report, however, is not up for a Faculty vote, and has gone to Faust for the final decision. It lays out three options: maintain the current policy penalizing members of single-gender fraternities, sororities, and final clubs; ban membership altogether in unrecognized single-gender social groups; or consider a set of “some other possible solutions.”

“As Harvard becomes more diverse, it is untenable to have USGSOs scripting campus life,” Clark said. “Our students are watching us. They are looking to us to find the right catalyst to bring about reform. Our students are eager for reform. Are we?”

Faculty members were eager to take up Clark’s challenge—so much so that Faust extended the meeting, already moved from its normal location in University Hall to the Science Center due to high anticipated attendance.

Lewis and his fellow motion signatories were quick to question the validity of the committee’s report.

“The caricature of off-campus clubs as bastions of privilege, full of the stock of the Puritans learning to discriminate against other people, is not based in fact, certainly not in any facts presented in the report,” Lewis said. “Indeed, the report contains almost no facts of any kind.”

“When the reasons offered for a given policy change as frequently as they have in this case, we should begin to wonder whether the policy in question has anything to do with reasons,” Government Professor Eric M. Nelson agreed. “The bottom line here, as it seems to me, is that we just don’t like these clubs. And some of them, at least, clearly merit our dislike.”

Still, other Faculty members jumped to support the committee’s work and criticize Lewis’s motion, which would prevent the University from disciplining students based on the organizations they join. This is Lewis’s second anti-sanctions motion: he withdrew the first one in January, after formation of the Faculty committee.

“I recall, Harry, that you would have closed [the clubs] if you could have, but our nonrecognition doctrine toward them made that problematic at that time. But you were no fan of theirs because you saw in Ad Board case after Ad Board case what could happen in them,” former Dean of FAS William C. Kirby said, addressing Lewis. “These opportunities don’t come very often for an institution, and we should not miss ours.”

The third social group docket item, Allen’s motion, would utilize a 1989 Massachusetts statute to declare co-educational clubs “student organizations” that are subject to Harvard's Student Handbook policies, and membership in single-gender organizations would preclude enrollment at the College. Allen’s proposal was dismissed by the committee in its report as unworkable.

In their statements before the Faculty, Lewis and Allen each criticized the other’s motion.

“There is no silver bullet in Professor Allen’s astonishingly sweeping motion either,” Lewis said. “It is time for a statement of principle from the faculty, not a carte blanche handoff to the administration.”

Allen retorted that while College administrators may be overstepping, Lewis and his supporters are championing freedom of association at the expense of other rights.

“The administration has made a claim for regulation that seems to be, analytically speaking, without limit,” Allen said. “The other side has appeared to treat associational rights as if they may never be weighed in the balance against other rights and freedoms.”

“USGSOs are omnipresent and omnipotent,” Sachee said. “It is not our desire, nor we presume is it the administration's, to be the social secretaries for 6,700 undergraduates.”

Sachee, a member of the Bee Club, promised to return to the November meeting with a recommendation “on behalf of the student body.”

The Faculty will continue discussion of the Lewis and Allen motions at their November meeting, where both motion will eligible for a vote. Lewis has requested a paper ballot for November.

A previous version of this story did not properly communicate the intention of Government professor Danielle S. Allen's faculty motion. Rather than recognizing final clubs as student groups, the motion seeks to apply the College's Student Handbook standards to co-educational social groups. As Allen details in a letter to the editor, the motion would also bar students from joining single-gender groups.