Geoffrey Farmer Builds an Alluring Apocalypse at the Venice Biennale 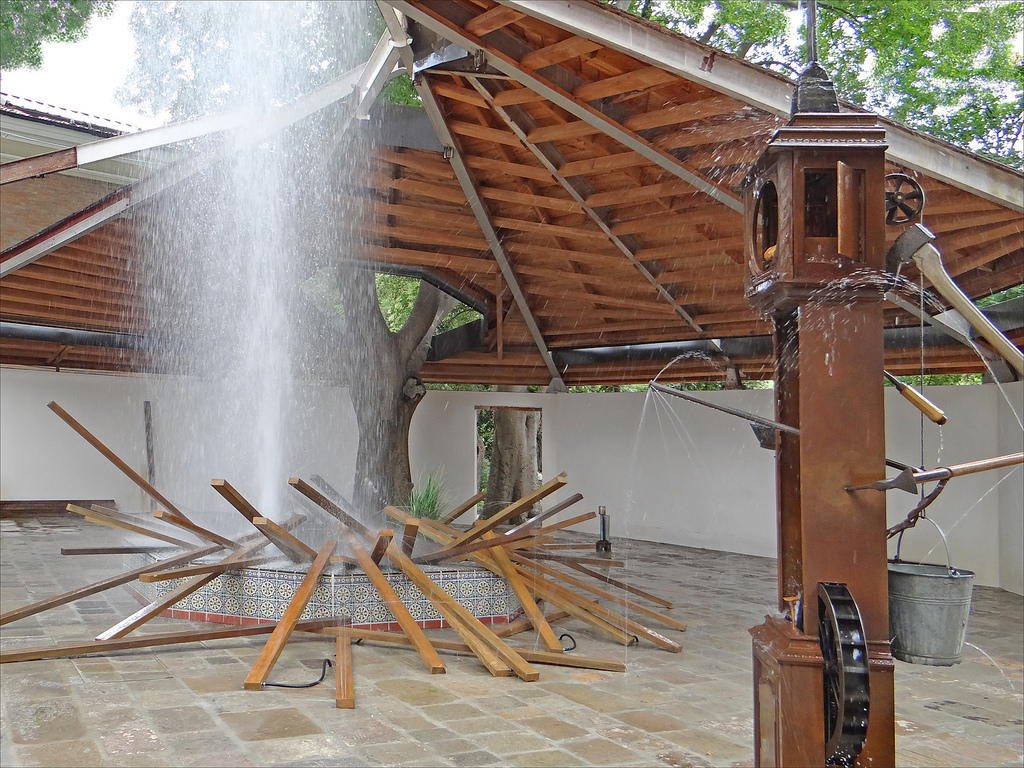 At first glance, Geoffrey Farmer’s Canada Pavilion at this year’s Venice Biennale seemed simply a playful installation that, with its geysers of cool water, was a pleasant break from both the gravity of the other pavilions and the oppressive heat of Venice in June. In its simplicity, however, lay a powerful commentary on the apocalypse itself, and on the inherent beauty of demise.

At this year’s Biennale, destruction was a recurrent theme. For the American pavilion, Mark Bradford piled rubble and litter up outside the door, rendering the classical architecture beat up and run down. In a critique of modern government, the Russian pavilion displayed a high-tech version of Dante’s Ninth Circle of Hell. Gal Weinstein even made mold his medium for the Israeli Pavilion, creating a fragrant display of decay that evoked destruction and nuclear war.

Thus, at first glance, the Canadian pavilion stuck out for its lack of overt reference to destruction. But its substance was not altogether unlike that of its peer pavilions. Farmer opted out of parading the human tendency for self-destruction, but he did not altogether ignore the apocalypse. Instead of focusing on destruction itself, Farmer reflected on what might be left in its wake—and his resulting vision was beautiful.

In Farmer’s piece, nature was all-consuming. The pavilion had been largely dismantled, and a giant geyser shot water like bullets into the space where the roof once was, giving the impression that the water was responsible for the pavilion’s collapse. The fallen wooden beams that littered the floor also spurted water, the life source for the plants that had sprung up in the fountain. Water dripped slowly from a human-sized praying mantis reading a book, a reference to Germaine Richier’s “La Mante, grande.” This part of the piece was accessible to those willing to take the risk of being showered by the enormous, unpredictable geyser that is the centerpiece of the installation. Water pooled in a pile of white plastic sacks and slid down a log leaning against the wall. Despite the crowds, the piece felt empty and abandoned. The image is of a world reclaimed by nature, of life rising from rubble.

In his image of possible future destruction, Farmer made reference to past destruction as well. He made reference to countless incidents of war and accident. In fact, Farmer went so far as to incorporate physical artifacts of destruction, such as pieces of the ruins from the fire of Peter Pitseolak High School in Cape Dorset, Nunavut and a water trough that stood in an open field in Switzerland throughout the Second World War. Under Farmer’s hand, the tangible products of disasters became pieces of something beautiful and serene.

Farmer took a step back from the other pavilions’ fear of the apocalypse. He reminds us that what humanity is afraid of is its own end, not the end of everything. The idea that our demise could in fact yield something beautiful—though we would not be there to see it—is one that, under normal circumstances, is incredibly difficult to grasp. In front of the dripping and splashing Canadian pavilion, it becomes easy.

In his description of his own piece, Farmer described a push to have the Canadian sign removed from the front of the pavilion. Though the country’s sign did indeed remain, Farmer hardly failed in his goal for universality. In fact, from toddlers splashing around in the water to elderly women staring upwards from under the brims of their sun hats, it seemed impossible for visitors to look at Farmer’s exhibition without smiling. With the simple beauty of glistening water—a medium fitting for the floating city of Venice—Farmer managed to elicit in the viewer a joyous, childlike wonder that seems a world apart from the rest of the Biennale.

Somehow, Farmer has made apocalypse alluring.

—Staff writer Yael M. Saiger can be reached at yael.saiger@thecrimson.com.