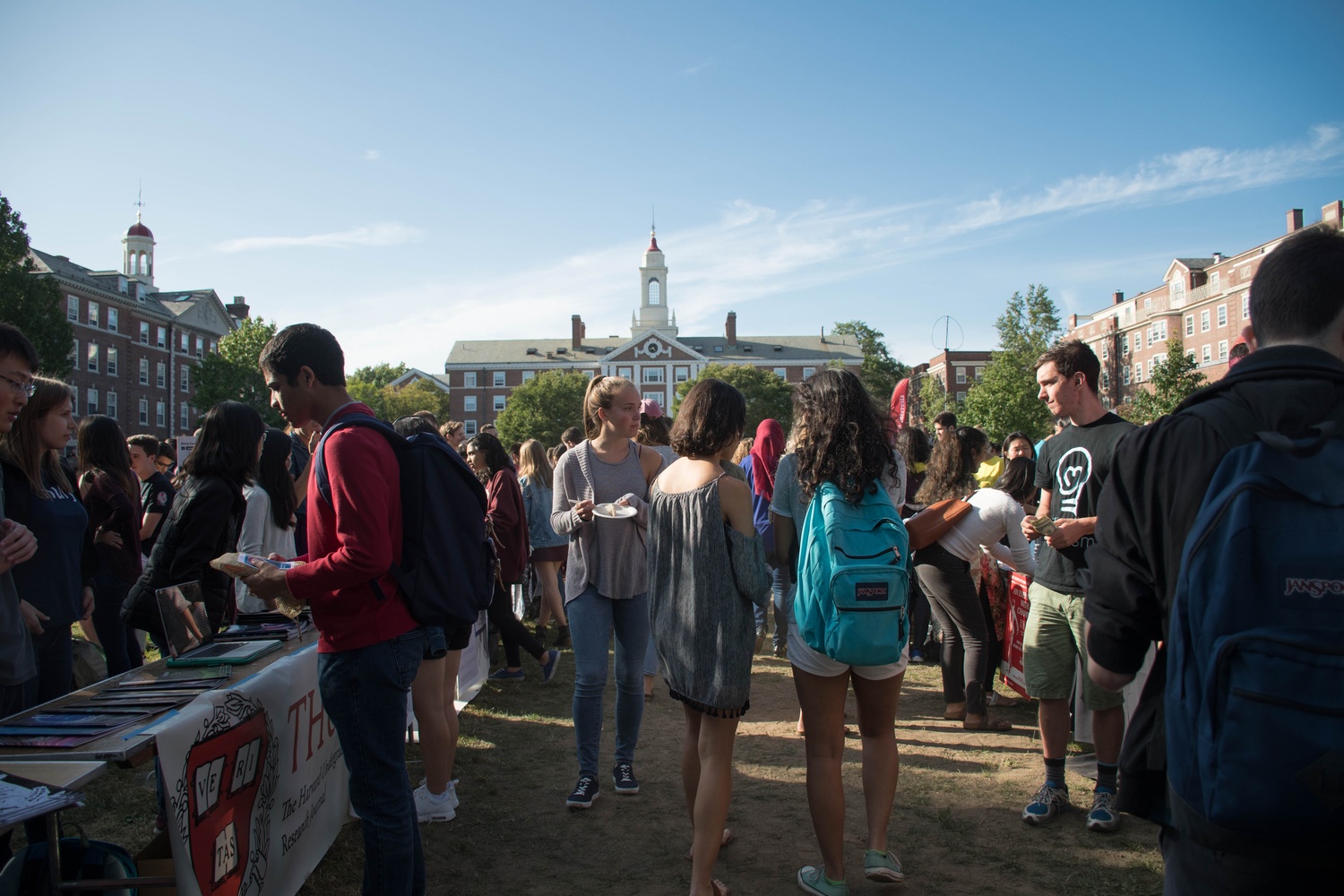 Members of various student organizations on campus publicized their groups to freshmen and upperclassmen at the Student Involvement Fair. By Megan M. Ross
By Junina Furigay and Kenton K. Shimozaki, Crimson Staff Writers

As College administrators move to stem the rapid proliferation of student organizations on campus, thousands of students flocked to the Quad Friday for the annual showcase of Harvard's hundreds of undergraduate groups—the Student Involvement Fair.

Eager first-year students navigated the crowded lawn with handfuls of flyers, while upperclassmen jostled in front of tables passing out sweets and sweet-talking students into joining their clubs. Dining halls closed for the College-wide affair and Harvard University Dining Services served their annual “Taste of Boston” themed dinner on the Quad Lawn.

Alexander R. Miller, associate dean for student engagement, said he was “excited” about the annual fair and praised the high turnout. Miller works in the College’s Office of Student Life, which hosts the activities fair.

With 442 student organizations officially recognized by Harvard College, however, Amelia A. McLaughlin ’21 said she felt a bit “overwhelmed” by the sheer number of activities available and had trouble navigating the plethora of booths.

“I think that it was a bit confusing to find the clubs,” McLaughlin said. “There should definitely be a bit more maps around the lawn rather than a just few big ones.”

Ethan Harradine ’21, who is originally from the United Kingdom, said the event felt like being in an “American college movie.”

“You walk in and there’s tons of different activities and things to look at,” Harradine said. “It’s been really cool so far to see the diversity which there is here at Harvard and what you can do during your time here.”

While students praised the myriad offerings at the activities fair, College administrators have expressed concerns in recent years about the priority that many students place on extracurriculars—often at the expense of academics.

The Office for Student Life last year elected to suspend and revise the recognition process for new clubs, citing concerns that new student groups tended to have short lifespans and overlap with each other. No new student organization has been approved since September 2016.

Under new rules passed in March, undergraduates themselves will now have broad new authority to approve and regulate student organizations. The Undergraduate Council will have the power to approve or deny applications from groups seeking College recognition before the Committee on Student Life, a student-faculty committee, provides their “rubber-stamp” blessing.

In February, a committee tasked with the implementation of the College's social group policy suggested that the College also review recognized student groups to "assess their contributions to the campus community." The Office of Student Life conducts an audit of existing student groups every five years, according to Miller.