On the Red Carpet, The Cast of ‘Bohemian Rhapsody’ Talks Queen, Method Acting 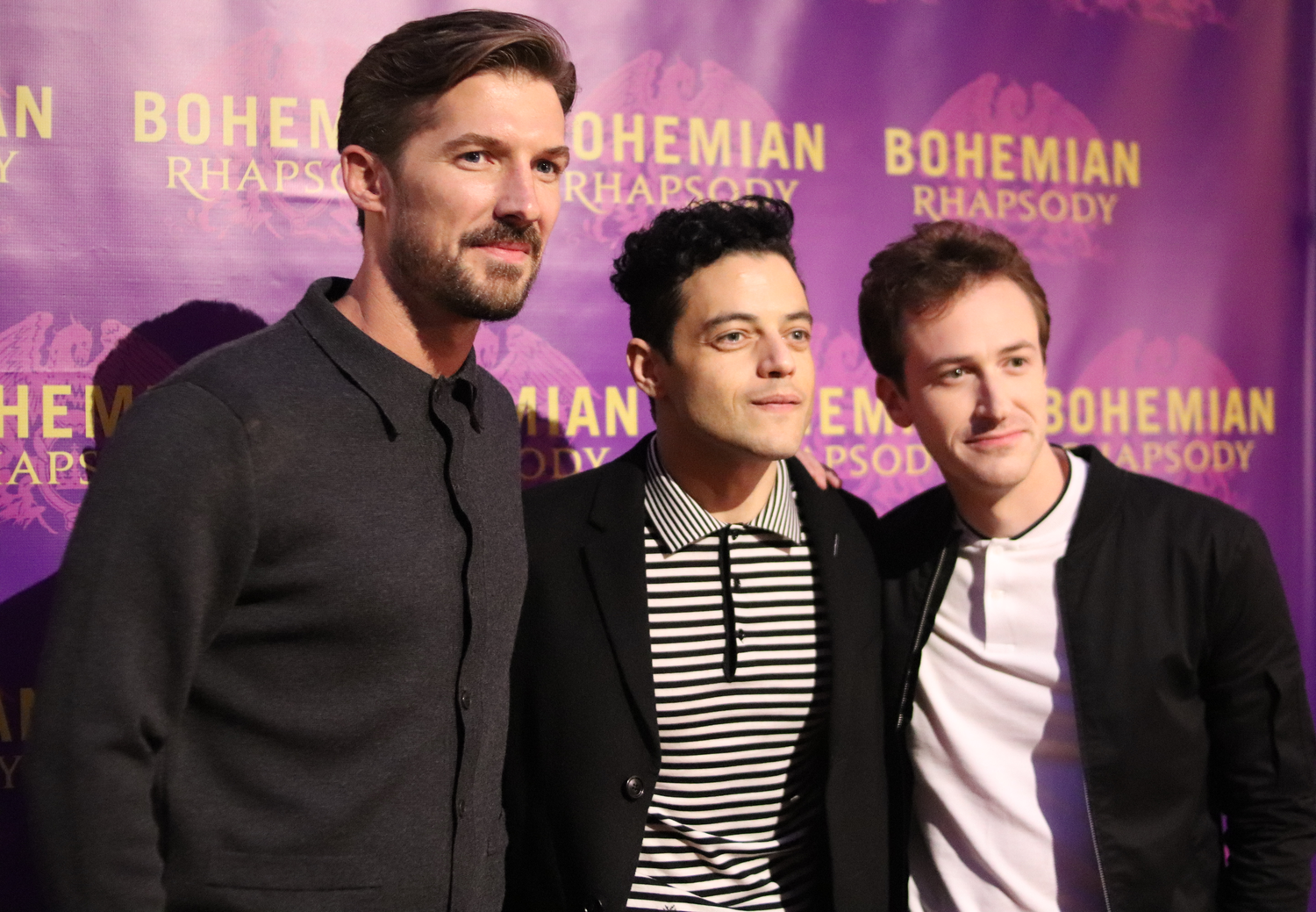 Stars of the new movie Bohemian Rhapsody Rami Malek, Gwilym Lee and Joseph Mazzello arrive at the Boston premiere of the movie on October 1st at AMC Boston Common which attracted many area college students. By Kathryn S. Kuhar
By Tiffany A. Rekem, Crimson Staff Writer

A marching band of five played “Don’t Stop Me Now” at the far end of the third floor promenade inside AMC Loews Boston Commons: a grand entrance for the actors on the first stop of the “Bohemian Rhapsody” press tour. Joseph Mazzello (John Deacon), Gwilym Lee (Brian May), and the Emmy award-winning Rami Malek (Freddie Mercury) arrived on the miniature red carpet fashionably late. Amid the downsized band and carpet, the actors seemed larger than life, which made their genuine warmth all the more gratifying.

“Bohemian Rhapsody” is a celebration of Queen — its rise to success, its struggle, and its revolutionary music — charting the journey of the band from its inception to its legendary 1985 Live Aid concert performance for the relief of the Ethiopian famine. Mercury grapples with his bisexuality, and the film captures Mercury’s courageous comeback in the wake of his AIDS diagnosis.

The Harvard Crimson got a chance to speak with Malek, Mazzello, and Lee about their experience making the film, which features recreations of numerous Queen performances. In fact, the renowned rock band gave some of the most famous performances in history, begging the question: How did the cast prepare to take on such a daunting task?

“Work. Hours and hours of studying footage of the band playing and studying interviews, mannerisms, physicality, and their voices,” Lee said. The actors also received help from a very special guest. Brian May — lead guitarist for Queen — served as the film’s music producer.

“When we’d be doing live performances, he’d be on set,” Lee said. “On the first day of rehearsals, meeting him was pretty terrifying, but he came straight up to us, gave us a big old hug, and from that moment we felt that we had his support and blessing. He was amazing.” Rather than giving technical advice, May coached the cast on how they could sell Queen’s performances physically.

On top of May’s guidance, Malek made sure to prepare for his role as Mercury with archival research and even more physical training.

“If you’re going to play Freddie Mercury, you better honor the man and do him justice. That means being as audacious and liberated as one can be,” Malek said. After watching almost every piece of archival footage on Mercury to be found, Malek went from casual fan to serious devotee.

“I worked with a dialect coach and a movement coach, who helped me articulate his physicality in normal daily life and onstage as well. Freddie wasn’t choreographed, so I didn’t want to work with a choreographer,” Malek said. “I wanted to be able to almost spontaneously combust the way he does on stage. Everything is impulsive with him, and I wanted to be as impulsive as I could day in and day out on that stage and with every sentence everyday for six months.”

Just about everyone knows the iconic boom clap of “We Will Rock You” and the infectious sway of “We Are the Champions.” Queen is known for incorporating the audience into its shows, and the band’s Live Aid performance goes down in history as the most eminent example. When filming the concert that was to be the final scene in “Bohemian Rhapsody,” over 500 extras were present to recreate the vastness of the experience.

“We invited Queen fans to come watch and be in the film,” Malek said. “There is that relationship you need to feed off of them to do some of these concert moments. You really sense the difference [between] when they’re there and when they’re not there, and you need them to lift you up.”

The “We Are the Champions” Live Aid performance was Mazzello’s favorite scene to shoot. “I had an out of body experience doing that,” he said. “I was onstage trying to remember the choreography and I just thought, ‘I can’t believe I’m doing this.’”

To Mazzello, Queen as a band and as captured within “Bohemian Rhapsody” is a band for everybody. “They really speak to the people who are marginalized and the outcast,” Mazzello said. “They always play to that person in the back of the room who feels a little bit lonely, who had a tough day at school or at work. They really want to give enjoyment to as many people as possible. That’s what we want to do with this film also, so if you get a little bit of enjoyment out of it, that’s the point.”

“Bohemian Rhapsody” is slated to hit U.S. theaters on Nov. 2.

—Staff writer Tiffany A. Rekem can be reached at tiffany.rekem@thecrimson.com.