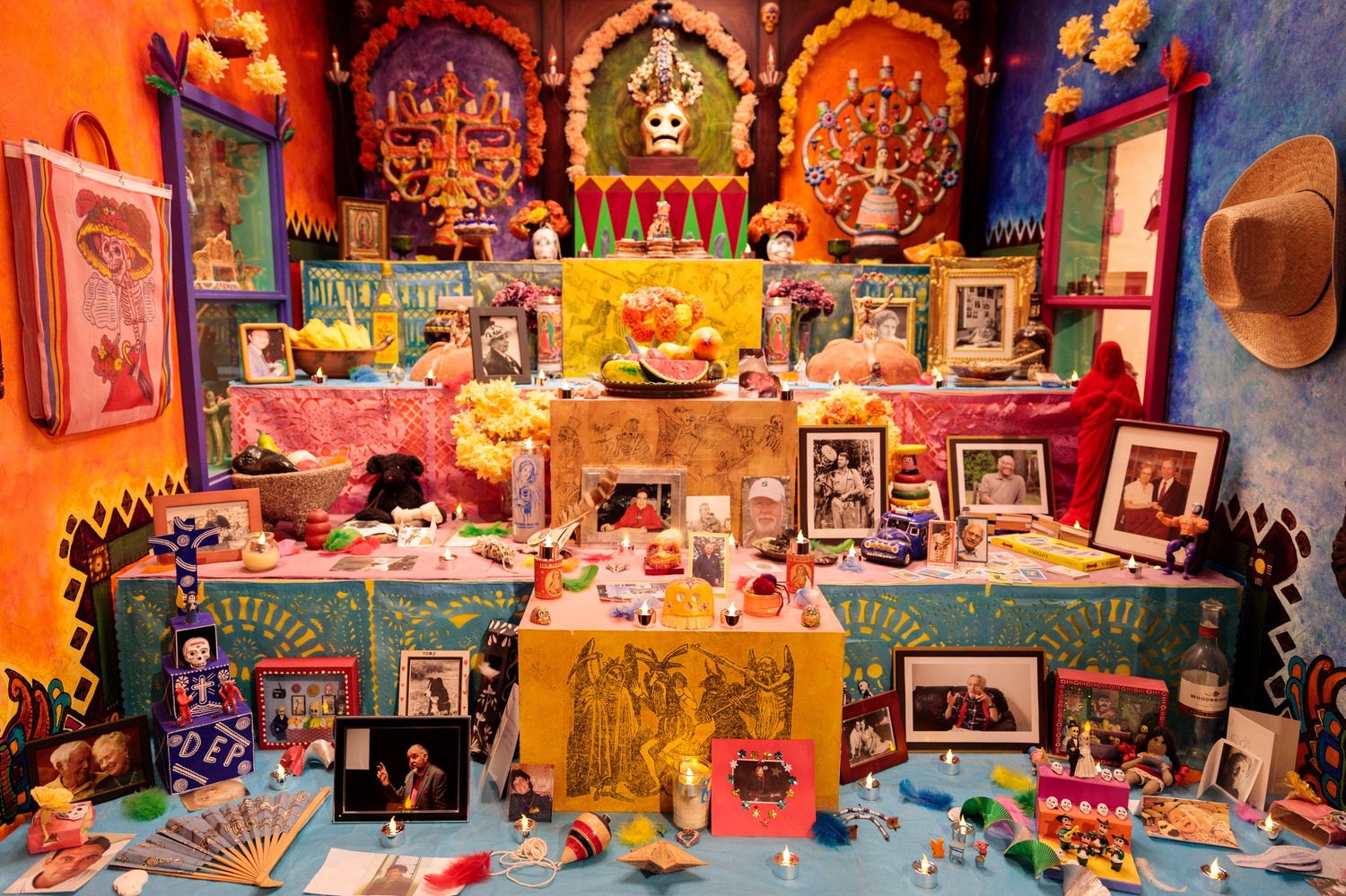 Families honor their deceased loved ones during the festival, an ancient Mexican tradition that lasts from Nov. 1 to Nov. 2. Although celebrations differ by geographic region, participants generally decorate tombs, cook large feasts, share stories, sing, dance, and build altars to invite the spirits of their ancestors into their homes.

“We think their souls are coming that night, and they’re enjoying that time with us,” said Michelle Arroyo Fonseca, an officer of cultural affairs from the Mexican consulate in Boston who attended Thursday’s event.

She said the Day of the Dead, which mixes Mesoamerican Aztec rituals and Catholic symbols, marks a unique way of remembering and celebrating — rather than mourning — dead relatives.

At the Peabody gathering, guests munched on “bread of the dead” and sipped Mexican hot chocolate while listening to performances by the musical group Son Jarocho Boston and by College students who participate in the Holden Voice Program, which offers lessons to University affiliates.

Elizabeth Eschen, the director of the Holden Voice Program, said she included both laments and “fun songs” in the program in order “to show the evolution of both pain and suffering and also joy and laughter.” 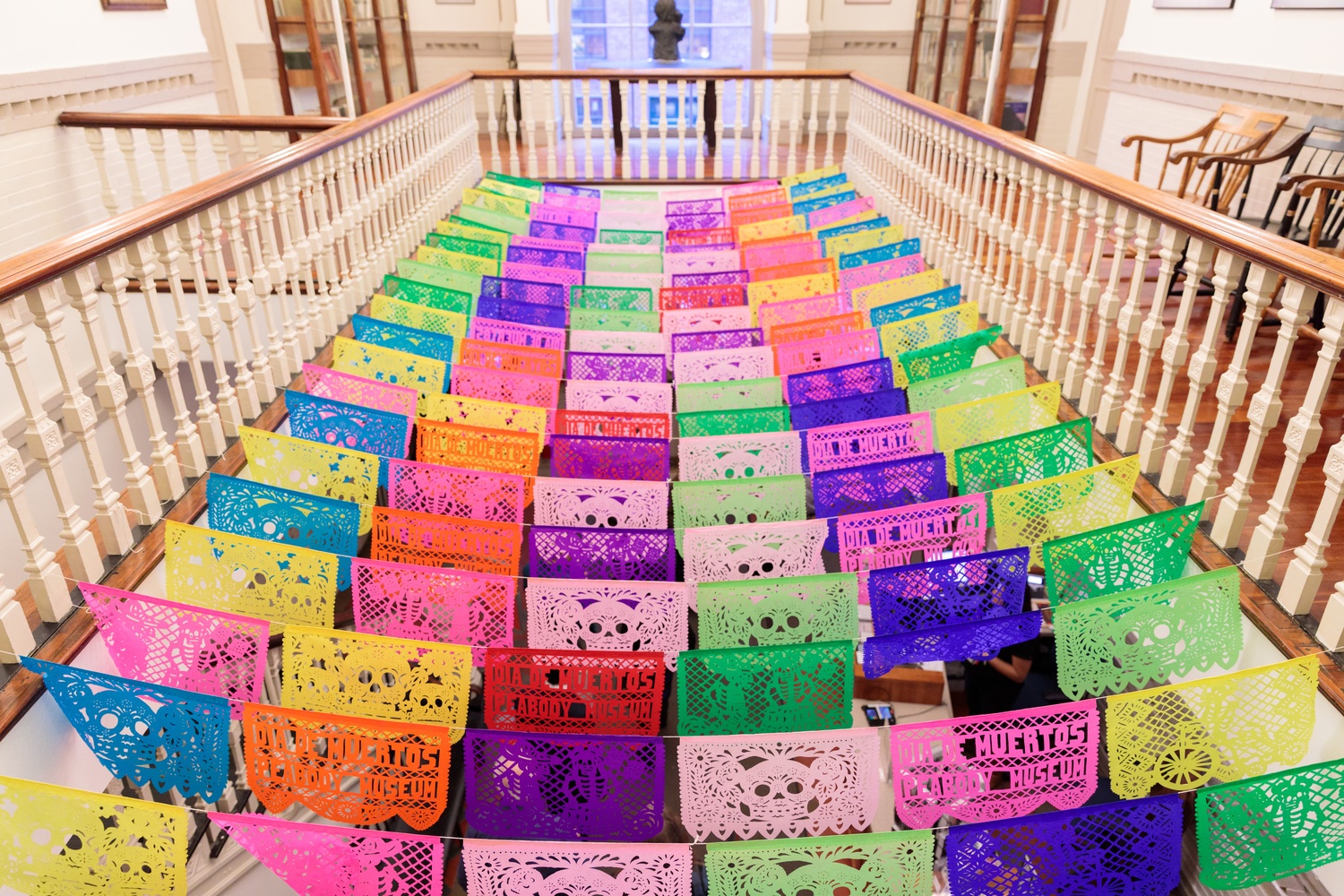 Papel picado (perforated paper) hangs between the stair railings at the Peabody Museum during its Day of the Dead party Thursday. By Joshua Y. Chiang

Diana X. Munn, who coordinated the event, said she appreciates the holiday’s emphasis on joyous remembrance rather than somber grieving.

“We like to remember those who have passed away and celebrate their lives,” she said. “So obviously it’s sad to lose someone, but at the same time it’s wonderful to have a space or a date when you remember them and you do things in their honor.”

Munn wore a yellow marigold pin, which she said was “inspired by the flowers that are often used in the celebration” of the holiday. She said the flowers, called “cempasúchil,” serve as guiding pathways that “attract the souls to the altar.”

Some visitors to the Peabody participated in a costume contest to celebrate the holiday. Many donned skeleton-themed makeup and elaborate clothes to dress up as Catrina, a figure who represents death in Mexico and has become an iconic image of Día de los Muertos.

Elaborate altars decorated with art created by Harvard students and Mexican folk artists alike served as the focal point of the gathering. Students in Societies of the World 30: "Moctezuma’s Mexico: Then and Now," taught by Davíd L. Carrasco and William L. Fash, chose this year’s altar theme of “Missing and Murdered Indigenous Women.”

Addressing the crowd at the celebration, Carrasco said the “real gift” of the holiday is that it offers participants from all over the world — not just Mexico — a chance to honor their ancestors.

A previous version of this article incorrectly indicated that the Saturday Day of the Dead event at the Peabody Museum is sold-out. In fact, the event is not ticketed.

A previous version of this article incorrectly indicated that Day of the Dead takes place from Oct. 31 to Nov. 2. In fact, it takes place on Nov. 1 and Nov. 2.

A previous version of this article misspelled the name of the musical group Son Jarocho Boston. It has been updated.