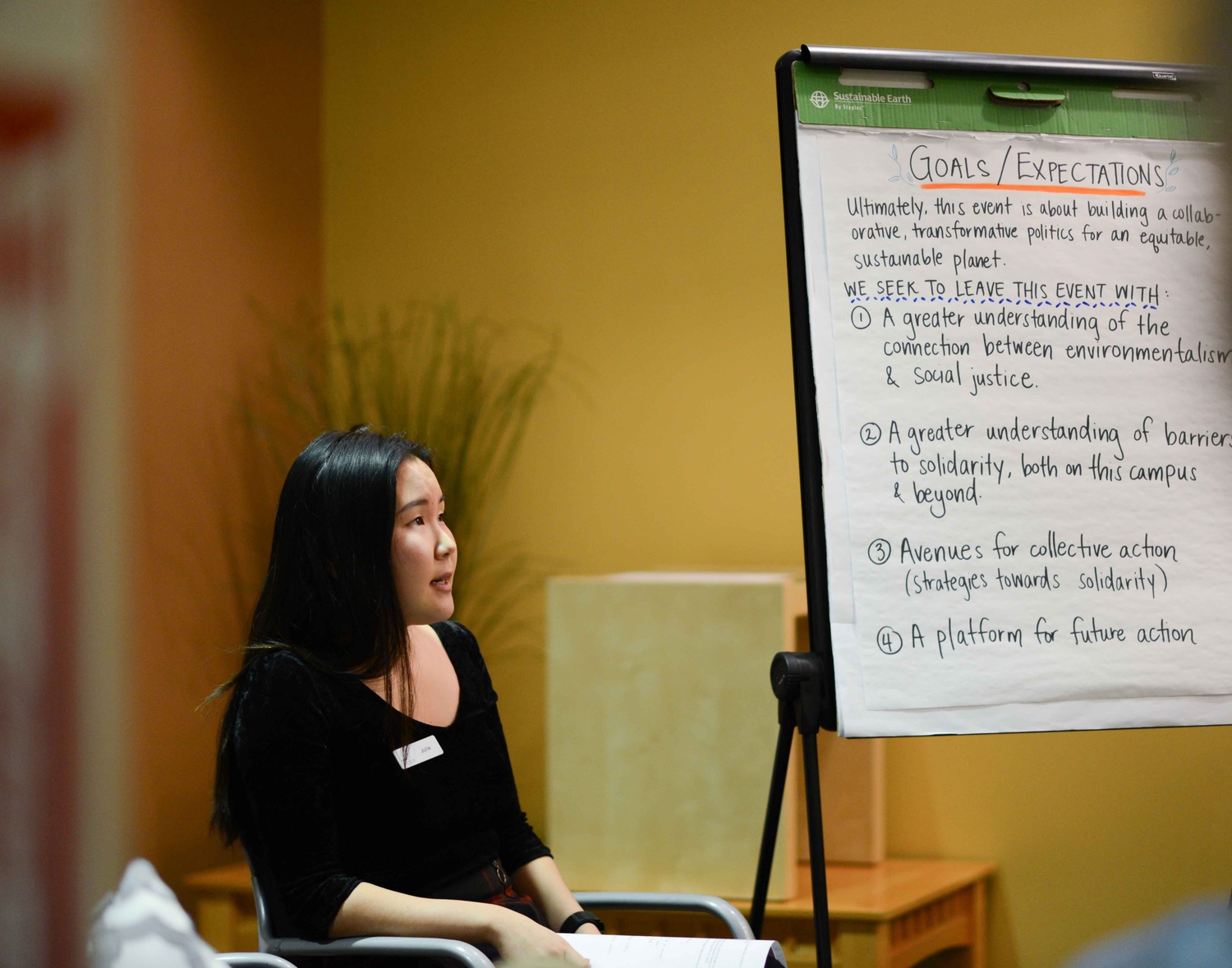 Julie S. Chung ('20) poses a question to the attendees of the Environmentalism as Social Justice discussion. By Melissa W. Kwan
By Rebecca S. Araten and Sam E. Sharfstein, Contributing Writers

Attendees struggled to find room to sit on the floor at the final Harvard College Women’s Center Let’s Talk event of the semester as more than three dozen participants gathered to discuss the challenges facing environmental justice activism on campus and the need for greater intersectionality on Wednesday.

The event’s goal, written on a large Staples Sustainable Earth notepad, was “building a collaborative, transformative politics for an equitable, sustainable planet.”

Julie S. Chung ’20, an intern at the Women’s Center and facilitator of the discussion, said she hoped the event would help ensure “that people understood what the barriers are and then being able to talk about this problem with their very different communities.”

Chung said she was pleased with the turnout and level of engagement from the participants.

“I think people were very honest about their opinions, which I think opened up the space for a better, more productive conversation,” she said.

Much of the discussion focused on how stereotypes of environmentalists privilege nature conservation over policies that address the impact of environmental issues on disadvantaged populations.

“There’s quite a gap between the academic sphere and the social sphere of social issues that we see in general,” said Jasmine N. Hyppolite ’21, a member of the Black Students Association. “Environmentalism can be seen as an engineering issue, as a science issue, but it can also be seen as a social justice issue, and you rarely see those two things in the one classroom.”

While there are student environmental groups and student identity organizations on campus, those groups rarely gather to discuss their shared interests in environmental justice, according to participants.

“Coalition is huge,” Hyppolite said. “I think student groups need to come together such as they did tonight and … understand that this problem is not the same problem for every community — that it’s something that everybody should have a hand in.”

Arielle Blacklow ’21, one of the founders of Harvard Undergraduates for Environmental Justice, stressed the urgency of the discussion, specifically on Harvard’s campus.

“It’s finally time that we’re having this conversation, and it’s very much needed,” Blacklow said. “The environment and environmental justice issues, environmental issues in general, are the biggest challenges facing our world right now, in my opinion, and we need voices. Harvard students have those voices.”

The Women’s Center is the first diversity office to pursue green office status from the Harvard Sustainability Office, according to Chung. The event concluded with a brainstorming session for a letter advocating the inclusion of “environmental justice language” in the University’s next five-year sustainability plan.