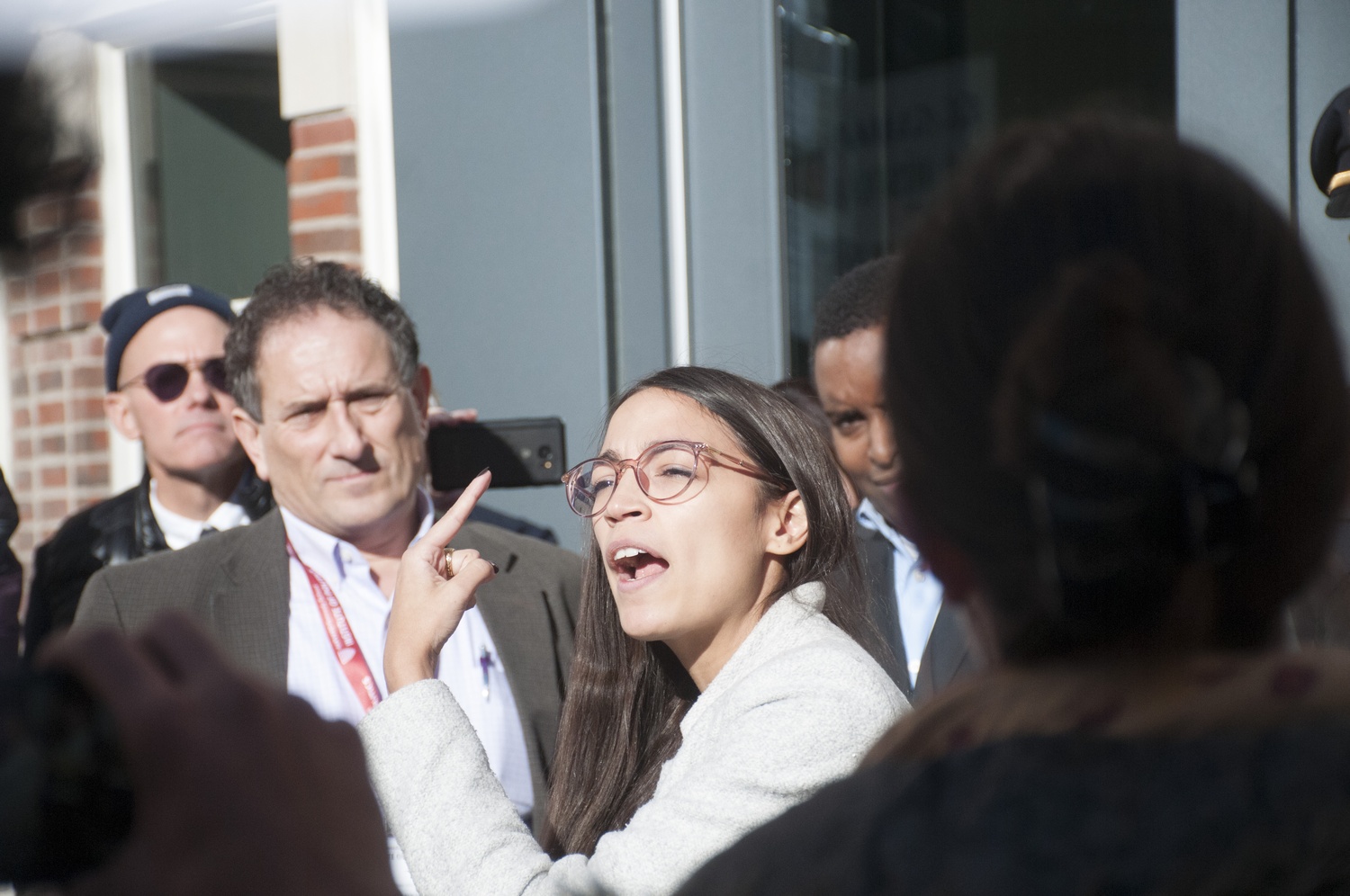 Alexandria Ocasio-Cortez joins a rally to call on the IOP to include environmental justice programming during Harvard's Bipartisan Program for Newly Elected Members of Congress. By Delano R. Franklin
By Alexandra A. Chaidez and Aidan F. Ryan, Crimson Staff Writers

Following criticisms of a Harvard-run orientation for newly elected members of Congress that featured a number of lobbyists, at least two lawmakers are calling for a review of the program in light of House ethics rules that currently restrict sitting members’ attendance at similar events.

Sixty-five members-elect attended the orientation hosted by Harvard’s Institute of Politics earlier this month and took part in three days of off-the-record panels, discussions, and meals with students and faculty from the College and Kennedy School. The event — which has occurred after every congressional election since 1972 — intended to “ensure thoughtful bipartisan discussions on a variety of public policy issues,” per the IOP’s website.

Representative Jamie B. Raskin ’83 (D-Md.) — a member of the House Administration Committee — said in an interview Saturday that he is pushing for a review of new member orientations. He added he is particularly interested in hearing from the new members and ensuring the events adhere to Congressional ethics rules.

According to House rules, an event like the orientation — whose organizers paid for newly elected members’ and lobbyists’ travel and board — would be subject to review by the ethics committee for sitting members of Congress. The rules can prohibit members from attending events with lobbyists present.

“I would be interested in hearing the freshmen training experience comprehensively and obviously we want to make sure that all of the ethical rules of the House are being observed in the process,” Raskin said.

Raskin said he has been hoping to conduct a review ever since he attended the Harvard orientation two years ago, when he was first elected to Congress.

“It’s something that struck me when I came to Harvard two years ago,” Raskin said. “We just want to make sure that we are making the most out of these kinds of opportunities and, obviously, respecting all the rules of the House.”

Representative Zoe Lofgren (D-Calif.) — another member of the House Administration Committee — told the Washington Post that the ethics committee should review Harvard’s agenda prior to allowing members-elect to attend.

“Ethics rules can prohibit accepting a trip where lobbyists are present,” Lofgren told the Post. “This is not something we encourage for members, and I think it’s a poor practice.”

“I’m sure this is something before the next such event we will be reviewing,” she added.

Executive Director of the IOP Amy A. Howell wrote in an email Sunday that the purpose of the conference was not to “push an agenda.”

“It's designed to bring newly elected members from both parties together to build relationships with each other and hear diverse perspectives,” Howell wrote.

One of the lobbyists present at the orientation, Dan P. Meyer, said in an interview Sunday that he did not act in his capacity as a lobbyist while at the event.

The session, titled “White House Congressional Relations: How to Advocate for Your Priorities,” focused on the topic of Congressional cooperation with the White House and did not include any discussion about their corporate clients, Meyer said.

“We weren't there in any capacity lobbying,” Meyer said. “We were there in our expertise, our professional backgrounds having worked at the White House or in congressional offices."

Meyer and Wall’s lobbying affiliations were disclosed in the official event schedule provided by the IOP, but former representatives William D. Delahunt and Joseph J. Heck — both lobbyists — only had their congressional experience listed on the schedule.

According to the Washington Post, the former lawmakers had their lobbying ties disclosed in separate binders. Howell wrote in an email that conference participants “received materials that included the full biographies of all participants including their businesses.”

Meyer, who served as chief of staff to former House speaker Newt Gingrich, said the IOP chose people who could provide the best expertise to freshman members of Congress.

"I think it's valuable to have people who know what they're talking about, so if those people happen to be lobbyists, so be it. If there are people who aren't, then they should have those people,” Meyer said.

Meyer noted that he has participated in this same panel “maybe 6 times over 30 years.” He said he has consistently “been impressed” with the programming.

The presence of lobbyists at the orientation also attracted criticism from other attendees. Alexandria Ocasio-Cortez, a member-elect from New York who participated in the program, shared her discontent with the lobbyists’ attendance at the orientation via Twitter.

“Our ‘bipartisan’ Congressional orientation is co hosted by a corporate lobbyist group,” Ocasio-Cortez tweeted. “Other members have quietly expressed to me their concern that this wasn’t told to us in advance. Lobbyists are here. Goldman Sachs is here. Where’s labor? Activists? Frontline community leaders?”

In a press conference on the last day of the conference, Director of the IOP Mark D. Gearan ’78 said the IOP is “welcoming feedback” from the Congress members-elect.

“We’re certainly not here to push any agenda. Our interest is creating a space for Republicans and Democrats,” Gearan said.

“This is a university. Any good university reviews its curriculum, reviews it coursework and thinks of ways we might want to go forward. So from my perspective, we would welcome that sort of feedback,” he added.