From Cannes: ‘Les Filles Du Soleil’ (‘Girls of the Sun’) A Heart-Rending Picture of Female Resistance and Resilience 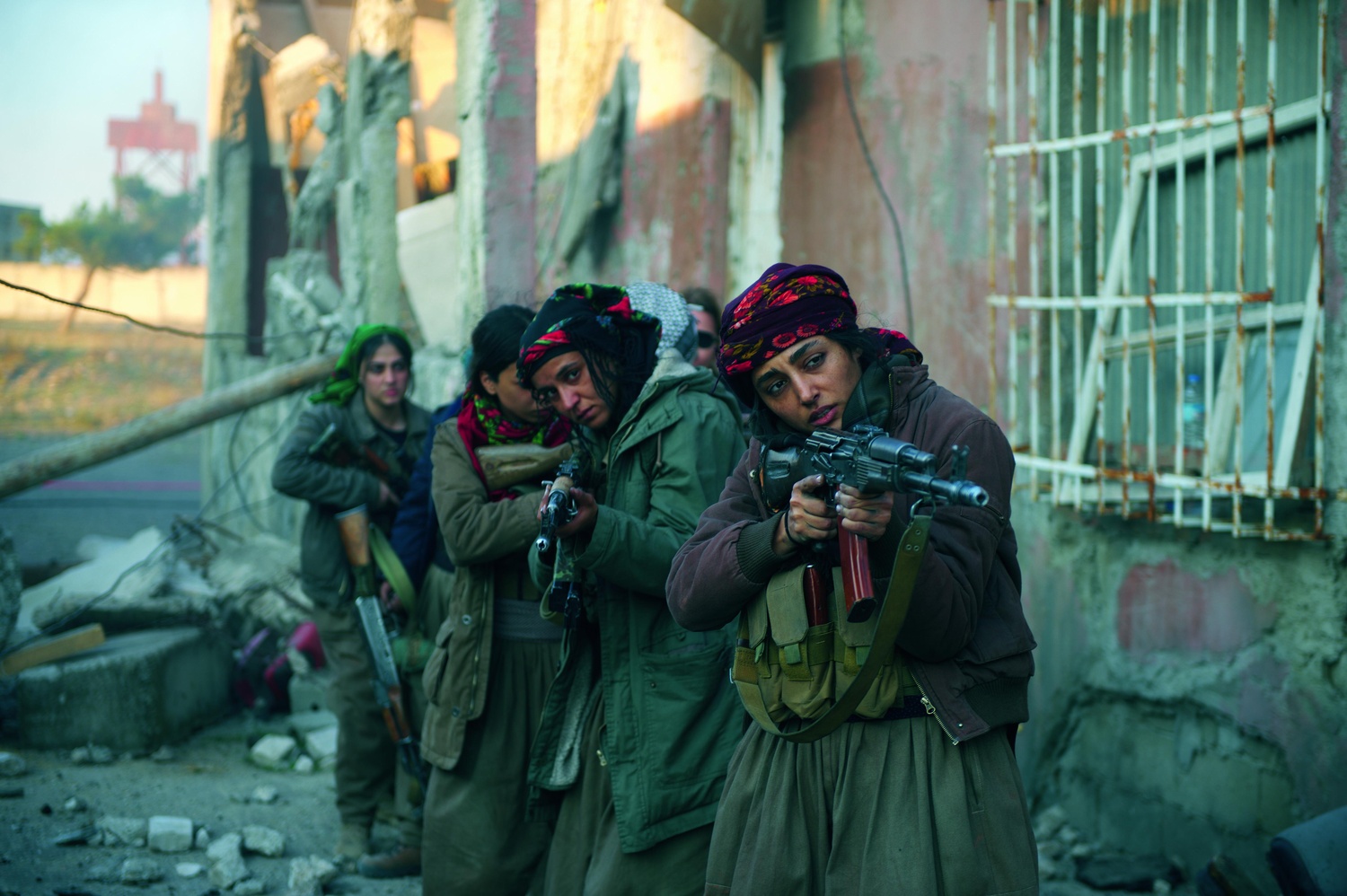 Cate Blanchett, President of the Jury, stood on the top of the steps of the Palais des Festivals, joined hand-in-hand with 82 female filmmakers and artists. It was a symbolic choice—only 82 women had climbed the stairs since the advent of the Festival in 1946. By contrast, 1688 male directors had mounted the stairs in the same time period. Blanchett, flanked on either side by powerful women, gave a speech on behalf of Time’s Up to advocate for better gender representation at the Cannes Film Festival.

“These facts are stark and undeniable. Women are not a minority in the world, yet the current state of our industry says otherwise,” Blanchett said. “We acknowledge all of the women and men who are standing for change. The stairs of our industry must be accessible to all. Let’s climb.”

The feminist energy that lingered after Blanchett’s speech lent a particular credence to the subsequent film premiere, a screening of “Les Filles Du Soleil,” Eva Husson’s breathtaking drama about an all-female battalion in Kurdistan. Led by their fearless leader, Bahar (Golshifteh Farahani), the women are at war with the extremists who have captured Bahar’s hometown of Corduene, a bloody conflict that French journalist Mathilde (Emmanuelle Bercot) hopes to cover in a longform report. As the titular group attempts to liberate Corduene, where Bahar’s son is being held, flashbacks to Bahar’s pre-battalion life paint a riveting yet bone-chilling picture of what she endured as a captive of the extremists’, a harrowing experience that hardens her into the commander she grows into. “All they’ve killed is our fear,” says Bahar in an inspiring speech that rallies the women to action. At its heart, “Les Filles du Soleil” is a stunning, visceral recognition of the power of female leadership.

It is no accident that its title hinges on the “Girls”: Most of them, made captives in their early youth, aren’t even quite women yet (Bahar and girls as young as nine are forced into sexual slavery until they can either be bought by a benevolent third party or escape). But the authority and self-direction that comes out of their trauma evokes the gravitas of much older, more experienced soldiers. And not only that, they are also adept empathizers, in tune with one another’s emotional needs. Husson pointedly cuts between scenes of the girls braiding each other’s hair, holding hands, singing together, and flashing to scenes of Bahar’s brutal abuse at the hands of male captors—the immense tenderness with which girls treat other girls juxtaposed with the immense brutality with which they are treated by men.

But the battalion would be nothing without its commander. Golshifteh Farahani’s adept, powerful portrayal of Bahar as a woman battered, then rising from the ashes of her abuse, is enough to draw tears. Bahar can be affectionate when she needs to be, but also resilient in the face of hardship; in the next instant, she embodies the model of a military commander, stoic and unafraid, a brilliant strategist. The men in the room pay attention when Bahar speaks. “She will be the one to lead us to victory,” Lamia says reverently of their commander. “She’s different than the rest of us. You think you chose her by chance?”

Husson, who also wrote the film’s screenplay, pays close attention to the ways in which women play the role of both caretakers and fighters, both nurturers and strategists. In that way, Bahar and Mathilde are foils, birds of a feather: They’re both mothers, stricken by the absence of their children (Bahar’s son Hemin was kidnapped by extremists, while Mathilde’s daughter Iris is at home in France, awaiting her mother’s return), but both professionals at what they do, ardently devoted to their respective causes. Bahar channels her vehement belief in her cause into her military career, while Mathilde is the patron saint of good journalism, snapping pictures in the midst of warzones. (Here, without seeming overtly propagandistic, “Les Filles du Soleil” also champions the inherent value of publishing the truth. “People could care less about the truth,” Mathilde says, in an emotionally charged moment between both women. “It’s one click away, and a tyrant can still come to power. People buy promises, dreams. Anything to avoid seeing this shit.”) In their partnership, they make each other better. Bahar’s courage jars Mathilde out of cynicism, while Mathilde tells her story.

Though that story is bleak, Husson imbues the grim world with lively color that reflects the hope and determination brimming in the women at the possibility of the extremists’ defeat. “She looks like a queen from the distant past,” says Mathilde of Bahar, perhaps referring to the young woman’s beauty, but more likely to the vividly colorful head scarves that she and all the other women wear. Their version of a uniform hat, the scarves contrast sharply with the yellowing crops of the fields of Kurdistan, giving life to an otherwise dying landscape. The combination is beautiful, but never takes away from the atrocities taking place: The film recognizes that it’s not “as if so much beauty could erase the horrors they’ve seen,” as Mathilde says of the increasingly green grass at the end of the movie. The subtle but crucial cinematography evokes flowers just waiting to bloom, like the women whose lives took a devastating turn for the worst before choosing to keep fighting a fight that should never have even started.

A poignant based on a true story, “Les Filles Du Soleil” is a story that reinvents our perception of a combat group, featuring courageous, strong women at the helm of Corduene’s liberation. The film is a commentary on what war can and does look like, the fighting beautifully rendered, moments of violence temperately balanced with scenes of the women’s perseverance, emotional vulnerability, bravery, and patience throughout the entire ordeal. These women, whose centrality to their main cause is undeniable, embody a sisterhood strong enough to win the entire war, and not just the battle for Bahar’s city. After all, if given the chance, there will always be women to take the lead: “If it had been oil and not milk that came out of our breasts, the coalition would have come much sooner,” remarks Bahar.

She’s right: Women are not valued as they should—not just in the film, but regularly in real life, as Cate Blanchett criticized—a mistake Husson makes sure to show proves deadly for those who would underestimate them. With its delicate, beautiful editing and its raw emotion, it wouldn’t be inaccurate to say that “Les Filles du Soleil” is a real contender for the Palme d’Or. If the Jury’s evident endorsement of the film is any indication, that possibility does not seem far off.