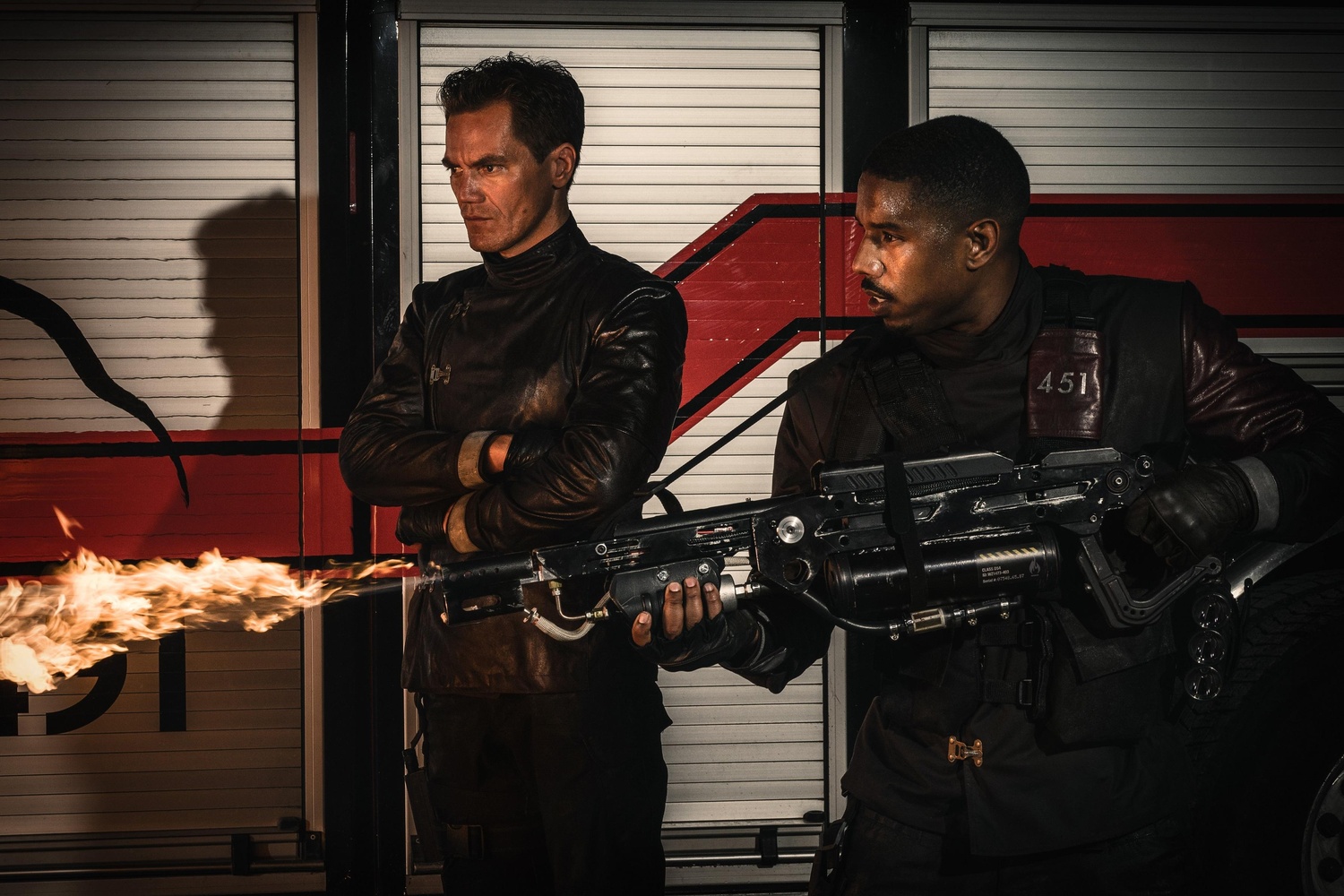 Michael Shannon and Michael B. Jordan star in "Fahrenheit 451," directed by Ramin Bahrani, which premiered at the Cannes Film Festival, 2018. By Courtesy of Festival de Cannes
By Mila Gauvin II and Caroline A. Tsai, Crimson Staff Writers

Hulu’s Emmy- and Golden Globe-winning success of Margaret Atwood’s “The Handmaid’s Tale” has demonstrated the market for screen adaptations of dystopian fiction in the Trump era. From director Ramin Bahrani, the latest installment is an HBO-produced adaptation of “Fahrenheit 451,” from the original 1953 novel by Ray Bradbury. In dystopian future Cleveland, Guy Montag (Michael B. Jordan) leads a squadron of so-called “firefighters,” whose job is counterintuitively not to fight fires, but to start them, stifling the dissemination of knowledge by the “Eels,” a rebel group using new technology to preserve works of literature and art. Montag shares a father-son relationship with his propaganda-spewing superior, Captain Beatty (a predictably creepy Michael Shannon), who spends his free time writing fortune cookie maxims on rolling paper—the only writing platform available in a nearly paperless world—in the dark of night. After witnessing a self-immolation, Montag begins to question his loyalty to the cause, turning to rebellious Clarisse (Sofia Boutella) for reading comprehension lessons and—surprise, surprise—a secret and short-lived love affair.

Bahrani’s adaptation of “Fahrenheit 451” butchers Bradbury’s original text, repurposing a nuanced classic for an easily-digestible work of Trump-era sci-fi. He disrupts its logic with confusing extraneous detail, muddies its characters with ambiguous backstories, and oversimplifies its careful and exacting attention to the literature it references, with poor race and gender representation to boot. During a time when the freedom of speech and the importance of facts are being threatened, it’s a shame that Bahrani delivers a watered-down version of a complex novel that demands so much more.

When Guy’s firefighter unit encounters a group of Eels, the history and inception of “Fahrenheit 451”’s society unveils itself in an unsatisfying explanation that somehow convinces its indoctrinated citizens, but that unintentionally codes as insensitive and tone-deaf. According to Beatty, the dystopian regime started burning books because everyone had “too many opinions.” As a result, they started burning the more “controversial” books: Black people were offended by Mark Twain’s “The Adventures of Huckleberry Finn”; in response, white people naturally sought to purge America of Richard Wright’s “Native Son”; and of course, let’s not forget the feminists who wanted to do away with Hemingway, his misogyny too offensive for their sensitive proclivities. Throw in a too-quickly mentioned second civil war that reportedly killed eight million, and ta-da! Bahrani’s world-building is careless, oversimplifying the motivations of both the marginalized and privileged of what we can assume are the people of today, whose grandchildren are the inhabitants of the Cleveland depicted in the film. Even the geography makes no sense: Do we really need to fly over an ocean to get to Canada, the new free world?

Bahrani, who also penned the film’s screenplay, also takes every available chance to make an unsubtle play on the cultural zeitgeist, making for an overload of unmerited, heavy-handed allusions. The screenplay version of “Fahrenheit 451” throws modern references around like confetti: Firefighters en route to crime scenes shout the syntactically familiar slogan, “Time to burn for America again!” Massive Jumbotron-esque billboards read, “If you see something, say something,” alongside live broadcasts akin to Periscope or Instagram Live streams of the firefighters heroically performing their duties. Clarisse, in a criminally shallow summary of the newly-inserted Second Civil War, references a “tech company that predicts our thoughts,” a vague stand-in for “evil” corporate tech, like Facebook or Google. But what commentary, if at all, do these dystopian equivalents make about their contemporary predecessors? And what’s the significance of each one, both in their world and in ours? “Fahrenheit 451” attempts to be a “Black Mirror” episode that tackles every polemic at once—and in doing so, effectively becomes nothing at all.

Clearly the film’s moral is “protect books and literacy,” but in its execution, it treats the literary canon as a monolith: Mao Zedong is equally relevant to Toni Morrison, who is equally relevant to Hemingway. Viewers get the sense that Bahrani is merely name-dropping literary figures, and has not so much as Googled these texts, much less read any of them. “Fahrenheit 451” has admirable intentions, but its references merely parasitize the books its source text lauds, mining their pages for aphorisms instead of paying tribute. Not reading is one transgression, but surely appropriating relevant lines from great works of literature as pithy truisms for its own artistic purposes is quite another—likely one that Bradbury would have objected to, and even intended to combat with the original book.

The illogic and reductive typification even permeates into the characters themselves, their consistent lack of nuance reducing Bradbury’s originally rich characters into movie tropes with questionable purposes and motivations, the actors behind them doing little to elevate their roles. Clarisse is the stereotypical Manic Pixie Dream Girl, her messy bleach blonde hair and mystifying gaze ensnaring Guy into her Eel world; Boutella predictably plays the role, barely emoting and inevitably charming in a forced way. Guy, initially everyone’s favorite firefighter—“I am a hero,” he even boasts at the start of the film—is unconvincingly rehabilitated thanks to a few flashbacks of a father whose relevance is never explained and incomprehensibly turns away from his successful life by his own Commander Beatty; Jordan tries too hard in his grimaces, in the strained tears in his eyes, that too tightly clenched jaw of his—that is, when he tries at all. Beatty too is an unfortunately one-dimensional character, Shannon’s performance evoking the ghost villains of his filmography’s past—from Richard Strickland in the “Shape of Water” to General Zod in “Man of Steel.”

Unfortunately, this one-dimensionality sullies more than just the main characters, extending to the minor characters whose somewhat impressively widespread representation—one of the film’s few redeeming qualities—is reduced to the stereotypes Bahrani makes of them. By typecasting them—a random black woman codes for Toni Morrison’s “Beloved,” a young black girl represents half of Zora Neale Hurston’s “Their Eyes Were Watching God,” and Mao Zedong is embodied in the only Asian character in the movie—Bahrani essentially reduces them to their race, tokenizing them in a way that undermines what their characters’ representation could have been—a general step in the right direction for the inclusion of underrepresented minorities in Hollywood films. Bahrani’s poorly worded dialogue does little to alleviate the mess he makes: Beatty drops the n-word for absolutely no reason, ironically right after explaining why the people of generations past took issue with “Huck Finn.” Additionally, Beatty’s father/mentor relationship with Guy not so subtly echoes a master/slave dynamic that—likely unintentionally—problematizes the duo’s brotherhood-turned-antagonism: Beatty takes credit for having raised Guy, ignoring his father who clearly meant something to him, and makes sure he knows that “everyone has a master.” “We are not born equal, so we must be made equal by the fire,” he says in yet another aphorism that alludes to his own hypocrisy.

Indeed, it makes no sense that Commander Beatty weaponizes literary allusions against Montag, then punishes him for the same offense; surely if Beatty throws around Kafka and Nietzsche, he too is committing treason? The inconsistency is never addressed, and neither are the remaining directorial gaffes that cheapen the original narrative in an adaptation too cool to appropriately represent Bradbury’s scorching “Fahrenheit 451.”

—Staff writer Caroline A. Tsai can be reached at caroline.tsai@thecrimson.com. Tweet her @carolinetsai3.