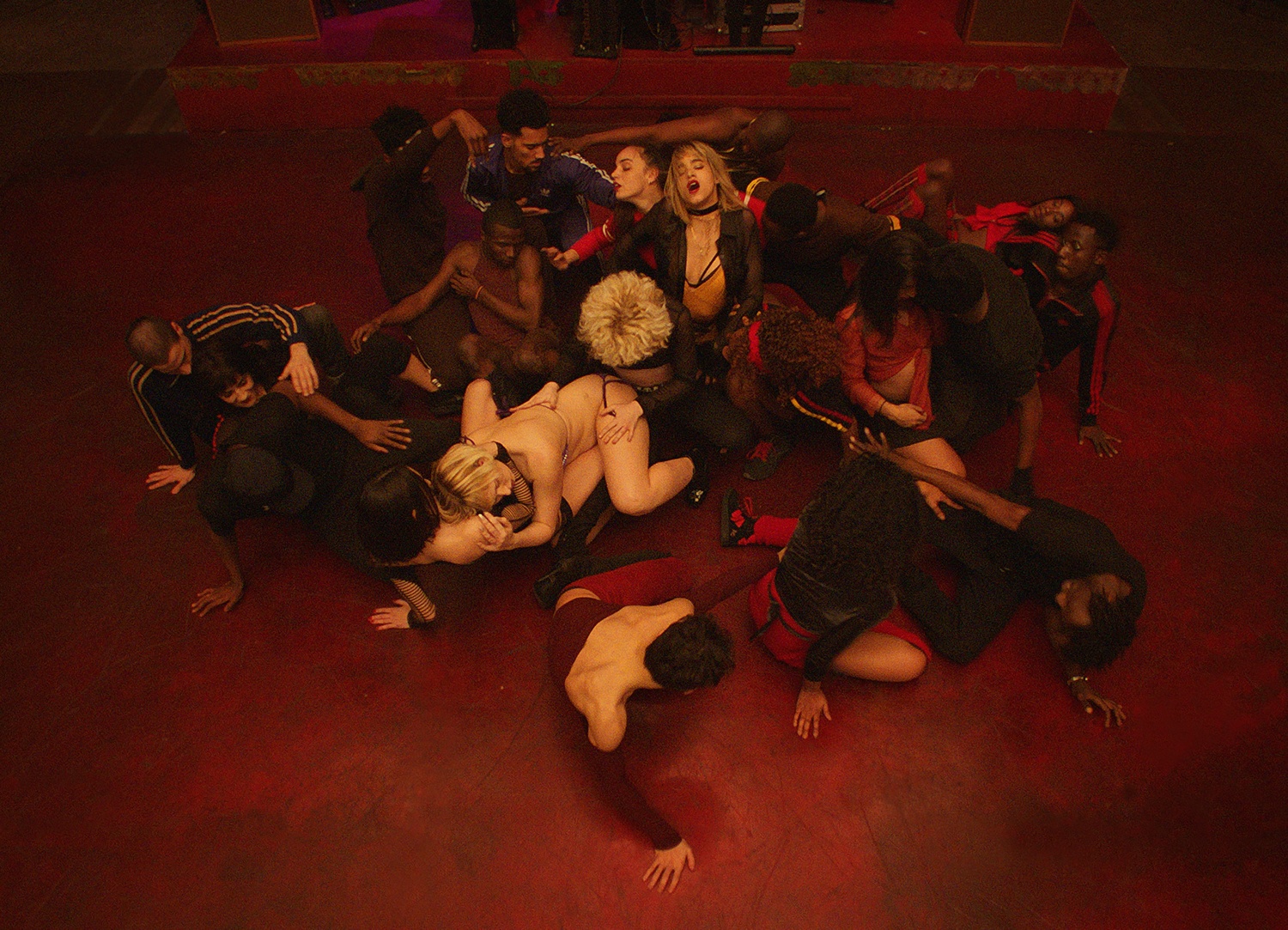 In Gaspar Noé’s “Irréversible,” a man is pummelled to death with a fire extension, his killer mistaking him for the rapist who savagely brutalizes a young woman in a scene that lasts a full 10 minutes. In “Love,” which premiered at the 2015 Cannes Film Festival, Gaspar Noé explores sex in all its 3D glory, from a threesome to a shot of a male ejaculating right into the audience. This time, Noé explores the effects of drugs on a dance troupe snowed into their rehearsal space, an abandoned building, in his entry into this year’s Directors’ Fortnight competition, “Climax.” The film opens with a chilling shot of a woman dressed in black, her arms bloodied, running hysterically in a field of endless white snow. Then, like a classic, pre-“Star Wars” film, the opening credits roll. The film is purposefully misleading, starting off as a well-choreographed dance sequence that devolves into an equally well-choreographed collective psychotic breakdown as the drug kicks in, initially unbeknownst to its consumers. What follows is a trippy prism of an arthouse film that succeeds in its attempt to destabilize its audience into the same debauchery as its characters, though at times the actors and director, too, fall into the easy trap of overdoing it.

Before things get too crazy, though, Noé introduces us to his characters first in an interview-style tape recording, then in a few dance sequences that speak to his technical prowess. The camera moves back and forth, left and right, up and down, flawlessly mirroring the dancers’ effortless movements. First is a carefully choreographed dance, the actor’s practiced and precise movements belying what is to come. Then comes the intoxication, the camera lingering a little too long on the bowl of sangria the dancers incessantly drink from, and it’s here that we meet our cast.

We have a semi-incestuous brother/sister duo, a German blonde named Psyche (Thea Carla Schott) whose (ex?)girlfriend Alaya (Alaia Alsafir)—a miniature version of her—wants something more, and Omar (Adrien Sissoko), who eventually becomes a victim of the troupe’s savage group decision to kick him out into the cold to freeze, among others. Sofia Boutella stars as Selva, the troupe’s leading dancer (though just like her acting, her dancing barely emotes). Souheila Yacoub is her companion, their conversation alluding to her dreaded pregnancy: “You ever had an abortion?” she asks. Selva elusively answers, “It’s good to have a choice, don’t you think?” Unfortunately for them and the other dancers, there is no choice as they unknowingly drink LSD-laced sangria, launching them into chaos.

As music blasts throughout the whole film—Rolling Stones, Daft Punk, etc., as several title cards somewhat obnoxiously inform the viewer—the film rolls into its second half, where Noé perpetually keeps us guessing when we will finally reach “Climax”’s climax. It’s not when Psyche pisses freely on the floor, fully clothed, in front of everyone, or when a woman accidentally gets lit on fire in her attempt to salvage the remainder of her cocaine, or when Selva runs away from David (Romain Guillermic), who is obsessed with her, right into Alaya’s arms. But it is in this process, this gradual degeneracy, that Gaspar’s restraint slowly disintegrates, the movie becomes a mashup of green, red, blue empty hallways, dirty bathrooms, and unkempt bedrooms that drag out the film unnecessarily. For Noé, this is the point. After all, “Life is a collective possibility,” and “Death is an extraordinary experience,” as more incomprehensible title cards read.

But what Noé does not realize is that he needs neither the pomp nor the pop to simultaneously denounce drug abuse and concoct a horrifically distorted ideation of the mother in the entertainment industry. He succeeds in the devastating depiction of Emmanuelle’s (Claude Gajan Maude) depraved motherhood to her son Titos, who she locks in an electric room full of cockroaches before losing the key, his screams for his mother reverberating as each character passes by; in the vicious mob mentality that overtakes the drugged crowd, when Souheila Yacoub’s character is brutally beaten, driven to cutting herself in her insanity despite not having drunk anything in her pregnant condition, which almost everyone denies; in Noé’s less successful, perhaps unintentional homage to Andrzej Żuławski “Possession,” splitting Isabelle Adjani’s famous subway scene into Boutella’s pantyhose entrapping and Yacoub’s implied miscarriage. Noé’s depiction of both potential and actualized motherhood in entertainment is an unexpectedly irksome commentary on the unsuitability of children for a woman trying to make it big. “I’m protecting him from all of you,” yells Emmanuelle to justify her son’s fatal imprisonment. But what Titos really needs protection from is Emmanuelle, and the drug-ridden world she finds herself in.

As the film finally climaxes to anticlimactic results, mitigated by the growing anticipation built throughout, you’re left wondering what the point was. Was it to warn against the danger of drugs, particularly of LSD, the drug implied to have been spiked in the sangria? Was it a statement on how mob mentality can be pushed to the deadly extreme in the short amount of time it took for the dancers to devolve into mania? Did Noé intend to paint such a bleak, hopeless image of women dancers—and never men—questioning the role children can have in their lives? Or was it just an exercise in restraint for the director, one he doesn’t always pass?

Regardless, it looks at the very least like Noé is finally starting to learn when to pull back on the extremes of his cinematic vision, barely controlling himself until he too can no longer hold off on exposing the climax within him in the camera’s loops and bounds throughout the warehouse.