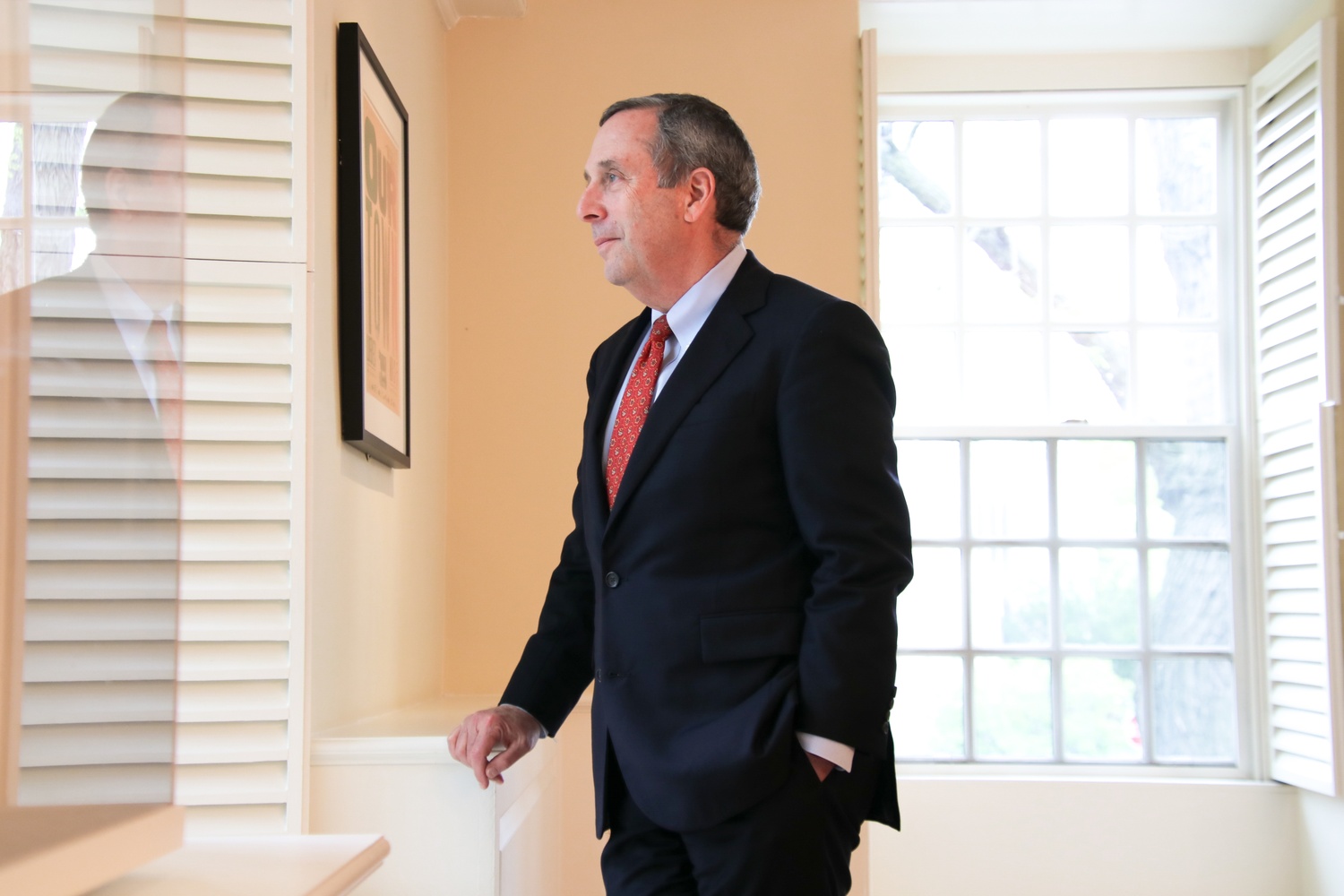 The reins to the nation’s oldest university changed hands Sunday over plates of salmon.

On his first day on the job, University President Lawrence S. Bacow prepared a home-cooked meal for his predecessor Drew G. Faust.

“While I can’t say for sure whether [Faust and her husband] enjoyed my grilled salmon, I know we all had lots of fun toasting Drew’s leadership,” Bacow wrote in a letter to Harvard faculty and staff Monday.

Bacow was named Faust’s successor in early February. After the announcement, Bacow said he would remain in “sponge mode” to soak up as much information as possible before taking over. In the final months of her tenure, Faust consulted Bacow on administrative matters like dean searches and introduced him to prominent alumni and donors.

Bacow will launch his tenure working from a temporary office in Loeb House while Massachusetts Hall, the traditional site of the offices of the University president, undergoes renovation. The building is slated to re-open at the end of the summer.

Bacow wrote in the letter that he feels “honored” to be Faust’s successor and that he is excited to begin his new job.

“I am one of countless people whose lives have been transformed by Harvard, and helping extend that experience to others is the opportunity of a lifetime,” Bacow wrote.

Bacow’s to-do list is already packed with a slew of challenges, including overseeing Harvard’s new Allston campus and battling growing hostility towards higher education around the country.

“We live in unusually challenging times — for Harvard and higher education, for the nation and the world,” Bacow wrote. “There is no place I would rather be, and no community I would rather be part of, to help address the challenges ahead and to consider how we can each do our part to meet them.”

In part to combat criticisms that Harvard and its peer Ivy League institutions are out of touch with the rest of the United States, Bacow plans to visit his hometown of Pontiac, Mich., he said in a recent interview with the Boston Globe. While there, he will announce new partnerships Harvard is undertaking with local institutions and schools, he told the Globe.

Bacow also faces a host of political challenges, including a fierce debate on immigration reform in Washington. During her tenure, Faust served as an outspoken opponent of the Trump administration’s hard-line immigration policies, especially President Donald Trump’s termination of Temporary Protected Status — a legal designation given to individuals from certain countries who have fled armed conflict or natural disasters — and his decision to rescind Deferred Action for Childhood Arrivals, an Obama-era program that allows undocumented youth to legally live and work in the United States.

These issues surfaced on Bacow’s doorstep his second day on the job.

A group of 30 Harvard staff, students, and faculty rallied in Harvard Yard Monday afternoon to deliver a letter to the new president asking Bacow to follow Faust’s precedent and advocate for permanent legal protections for undocumented individuals.

The rally was organized by the Harvard TPS Coalition, a group of workers, students, and faculty that advocates for permanent residency for individuals with TPS or DACA status.

The group’s letter asks Bacow to “encourage and lead the growing opposition to inhumane policies that are dividing families at the border and in our local communities” — a reference to the Trump administration's “zero-tolerance” policy, which in recent months has led to the separation of more than 2,000 immigrant children from their parents at the border.

Bacow previously praised Faust’s advocacy efforts for undocumented students and said he looked forward to serving as a “strong voice” on their behalf.

“Harvard remains deeply committed to supporting those in our community who have been impacted by recent changes in the federal government’s TPS, DACA and other immigration policies, and we will continue to make every effort to have our voice heard and to advocate for permanent legislative solutions to these challenging issues,” University spokesperson Melodie L. Jackson wrote in an emailed statement Monday.

In his letter to faculty and staff, Bacow thanked his new colleagues for welcoming him to campus and urged them to “come up and say hello” if they see him around Cambridge this summer.

“There’s nothing quite as invigorating as being a Harvard student again,” he wrote.