Lawrence S. Bacow will become the 29th president of the country’s oldest University at a time when higher education is under siege.
By Kristine E. Guillaume, Jamie D. Halper, and Luke W. Xu 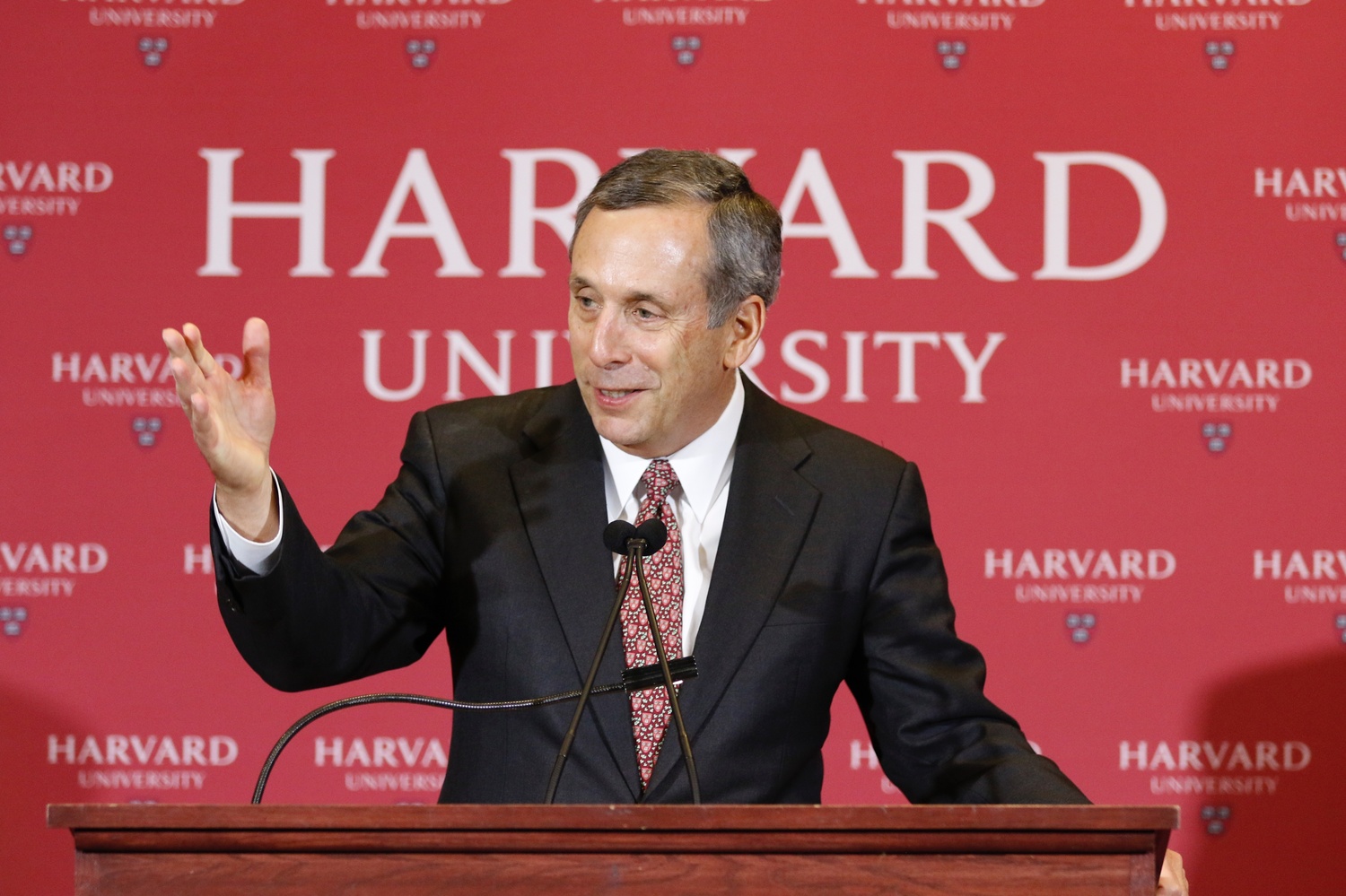 As Harvard's next president, Lawrence S. Bacow will wade into what some call a political environment hostile to higher education. By Timothy R. O'Meara

Lawrence S. Bacow will become the 29th president of the country’s oldest university at a time when higher education is under siege.

Republican lawmakers are taxing large university endowments, threatening cuts to federal research funding, and debating the future of undocumented students and financial aid, among other issues. In an interview in November, outgoing University President Drew G. Faust called the endowment tax “a blow at the strength of American higher education,” expressing dismay at the turning tide in Washington against universities.

As Harvard’s next president, Bacow will wade into this hostile political climate—and he bluntly acknowledged the industry’s skeptics in his first public appearance as president-elect.

“These days, higher education has plenty of critics. And candidly, I think some of the criticism is fair,” Bacow said at the press conference Sunday afternoon announcing his appointment.

The Harvard presidency has long required its holders to use the office as a platform to advocate for higher education writ large. Since the election of President Donald Trump in Nov. 2016, this task has become an increasingly pressing imperative.

In their speeches Sunday, Bacow and William F. Lee ’72—the senior fellow of the Harvard Corporation and the head of the presidential search committee—both made reference to public and political disillusionment with higher education.

“We wanted someone who could hit the ground running because neither we, nor higher education, have time to spare,” Lee added.

Bacow is not new to the higher education scene—he served as the president of Tufts University from 2001 to 2011 after working as the chancellor of the Massachusetts Institute of Technology. And he isn’t new to Harvard, either: he holds an M.P.P and Ph.D. in public policy from the Kennedy School, as well as a J.D. from the Law School. He returned to Harvard decades after graduating to serve on the Corporation—the University’s highest governing body—and in various capacities at the Kennedy School, Graduate School of Education, and the Law School.

“I must confess that when I arrived at the Kennedy School in 1972 as a 20 year old graduate student, I never could have imagined that I would be standing here today,” Bacow said Sunday.

Despite his enthusiasm for a school where he spent many of his formative years, Bacow conceded that some of Harvard’s—and higher education’s—institutional patterns need to change.

Bacow shied away from mentioning any specific plans to lobby lawmakers in D.C. but he did express a commitment to advocating on behalf of undocumented students at the University, as Faust has done throughout her presidency. Approximately 65 undocumented students currently attend the College. Faust has spoken out forcefully against the repeal of Deferred Action for Childhood Arrivals, an Obama-era program allowing undocumented youth to live and work legally in the United States.

“I think we have to do everything we can to support those students who are here who have known no other country, who are talented, I think Drew has demonstrated extraordinary leadership and I look forward to also being a strong voice on behalf of them,” Bacow said.

Beyond national issues, Bacow will confront a number of challenges closer to home—namely, those stemming from what administrators call Harvard’s efforts to become a more inclusive and welcoming campus.

Central to the controversy over inclusion and belonging at Harvard is the May 2016 policy placing penalties on members of single-gender social organizations. During the question-and-answer period of the press conference Sunday, Bacow repeatedly used the pronoun “we” when discussing the rationale behind the penalties, referring to his role on the governing body that ultimately decided to preserve the policy in Dec. 2017 after more than a year of debate.

Bacow reaffirmed his commitment to the controversial policy, calling the rule the “right one for Harvard.”

“Part of what we’re trying to do is ensure that every student who comes to Harvard has an experience which is welcoming, and has an experience which makes them feel like a part of this community,” Bacow said. “President Faust and her team have put together a policy which we’ve had a chance to spend some time thinking about and will have more time to think about going forward.”

He acknowledged he was a member of a fraternity as an undergraduate at MIT. But Bacow said he thinks “those were very different times.”

“When I was enrolled at MIT, there were about 1000 students in my class and I think less than about five percent were women, so there was no such thing as gender-neutral housing at MIT,” he said. “Fortunately, MIT has changed and Harvard’s changed.”

At the press conference, Bacow also addressed long-standing calls from alumni and students arguing a candidate from an underrepresented background should be selected for the University presidency. Bacow defended his own record promoting diversity at other institutions.

“During my time at both Tufts and at MIT, I worked very, very hard to promote excellence, and I think diversity is a pathway to excellence,” he said. “We need to look for the very best, and during my time at Tufts I’m proud of the record of bringing women and minorities and people of color into the senior leadership, into the faculty, and also into the student body, and I hope to do the same thing here.”

Tilghman said the Corporation considered calls for diversity in its charge to find the “very best” person to lead the University for the next decade.

“In order to execute that charge appropriately we looked very broadly and inclusively at candidates,” she said. “I feel as though we took very seriously our charge but we did it in a very broad way.”

In recent decades, Harvard has placed large bets on becoming an engineering powerhouse in the 21st century.

Two University presidents have made expanding into Allston a priority and Faust announced in 2013 that the School of Engineering and Applied Sciences would make the move across the river. The new campus is slated for completion in 2020.

Bacow, an economist and lawyer who specializes in environmental policy, will oversee the completion of this move—and with it, a continued expansion of Harvard’s science offerings.

Tilghman said Allston will be one of the “most important” focuses for Bacow when he takes office.

“It’s a once-in-a-century opportunity for Harvard to expand in a way that will be beneficial not just to the institution but to Boston and to Massachusetts and ultimately the whole country,” Tilghman said. “It was clear that was going to be an initiative that had to be continued.”

Growth in the sciences formed a critical consideration throughout the search, according to Tilghman. The committee met with Francis J. Doyle III, the dean of SEAS, multiple times in the early stages of the search.

Bacow’s speech seemed to prove him similarly committed to advancing Harvard’s standing in the sciences. He called Allston an opportunity to “envision the university of the future.”

“Our breadth has long been our great strength, and our great opportunity now is the chance to combine our strengths in new ways that help address some of the world's most pressing problems,” he said.

In response to a question raising concerns that Harvard’s science programs pale in comparison to those of its competitors, Bacow said he thinks “the sciences at Harvard are second to none.” He particularly praised Faust’s initiatives on this front.

Bacow said he thinks his love of science and his experience working with scientists at both MIT and Tufts will help him carry on Faust’s legacy.

“I’m not a scientist myself but I’m a science junkie, it’s the reason I went to MIT as an undergraduate,” he said. “I’ve worked closely in my prior life with scientists, with engineers, mathematicians, and physicians, and I look forward to doing it here as well.”

Throughout the search, nonetheless, Lee maintained the significance of soft skills in the search committee’s consideration.

In a Nov. 2017 interview with the Harvard Gazette, a University-owned publication, he said he wants a president with “fundamental human characteristics.” At the press conference, Lee focused heavily on Bacow’s commitment to leadership and to the University.

“He inspires trust. He is not just smart, but wise. He is innovative and entrepreneurial. He has high academic standards and excellent judgment in people,” Lee said. “He is a person whose natural instinct is to give credit but not take it, and as a result he is all about the institution and the people in the institution, and not about himself. He is someone who loves Harvard but whose love isn’t blind.”

In an interview after the press conference, Bacow said he plans to spend the next few months before he official takes on the role in “sponge mode.”

“I’m going to be trying to learn as much as I can so that when July 1st comes around I’ll be in a position to be able to assume the responsibility and carry the ball from her and it will be a smooth handoff,” Bacow said.

In the meantime, he said he is most excited to learn about the parts of Harvard with which he is less familiar.

“I’ve spent my entire professional career on a college campus and I consider myself blessed to have been able to do that,” he said. “I’m looking forward to going back to school.”