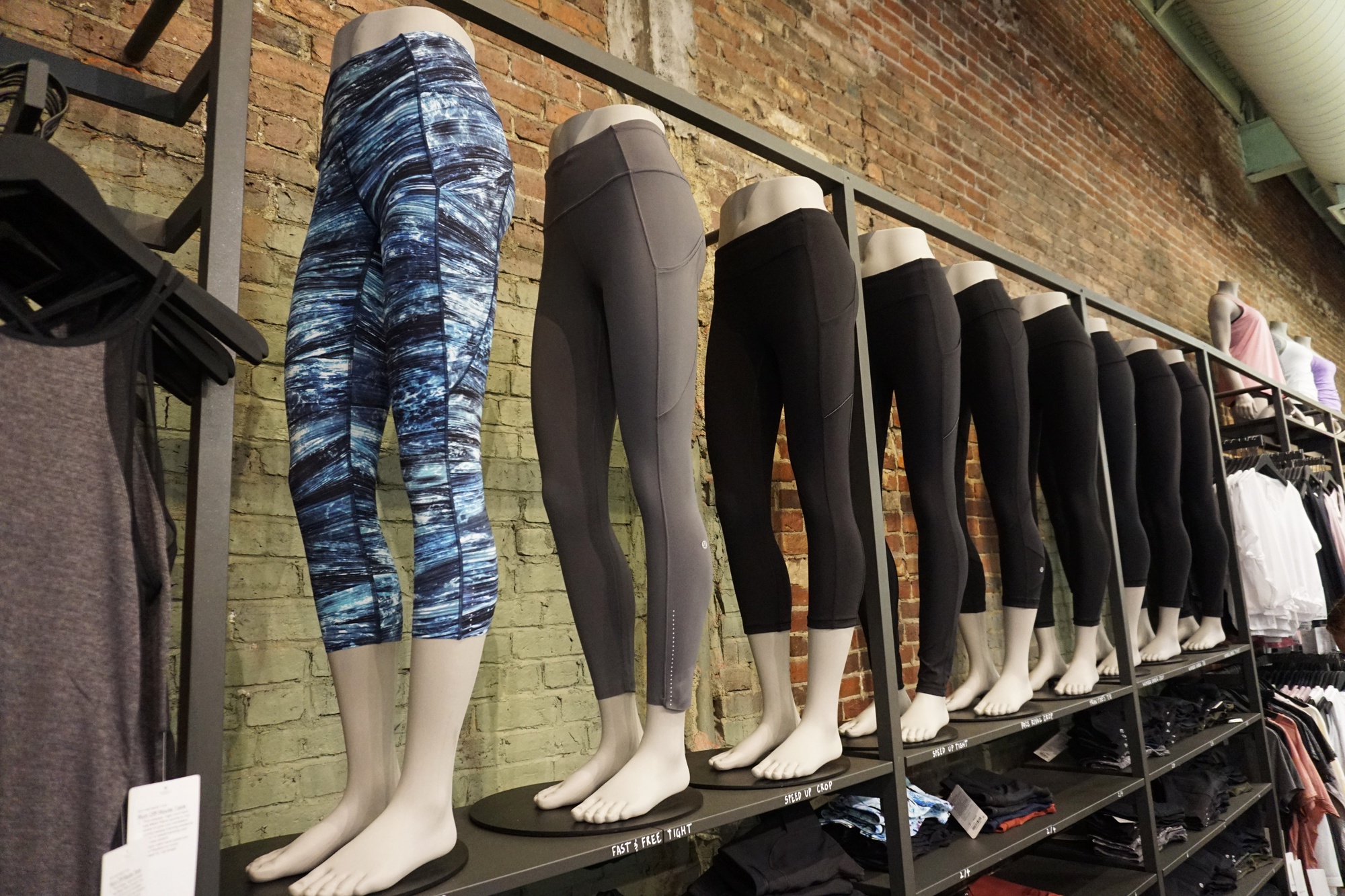 What Are You Lifting: Lululemon

Deep thought is a sweat-inducing process, blurring the boundary between mental and physical discipline. Athleisure and sartorial control are attempts to prove intellectual control.
By Jensen E. Davis

When I first heard that Lululemon, the luxurious athletic wear company, was opening on Brattle Street, I was surprised to realize there wasn’t one in the Square already. It felt logical that a company with sweat-resistant leggings and performance-enhancing, extra-support sports bras would find a home in Harvard Square, but I couldn’t articulate why. At Harvard, mental discipline has cultural capital. So it seems like a natural hub for the athleisure trend, a style that is discipline incarnate, as if the wearer has metabolized and sweated out the essence of discipline. So, with the first installment of my health and wellness column looming, I went to the month-old Lululemon on Brattle Street to trace my hunch to the source.

When I arrived at the store Thursday morning, I was greeted by four svelte mannequins in the window display. One wore grey leggings, another a dusty blue bicep-hugging long-sleeved shirt. All their arms hung casually by their sides, as if they were at total ease in their plastic bodies. They seemed to be staring at me, bodies angled entirely towards the street. But they had no heads.

Beneath the mannequins, window decals warned me that “the most important answers will never be found in the search bar.” An oversized search bar was drawn below. Through the empty URL, I could glimpse into the store and see Lululemon’s answers — rows of black leggings. Whatever vaguely conjured questions these leggings might answer (perhaps something as innocuous as, “How do I tone my glutes?” or maybe, “How do I create an individual sense of purpose instead of metabolizing my family’s values?”), the graphic suggested I must search actively, not virtually (code for passively). The ambiguity of “answers” proposed that 1. stretching my legs in a pair of their $98 black leggings and 2. actively working through an “important” philosophical question by reading were one and the same, as if to imply the way I flex my body must necessarily reveal the way I flex my most important muscle, my brain. Mental and physical collapsed into one.

Bearing this omen in mind, I entered the store. It felt surprisingly austere — the floors were deep grey, the walls plain white and exposed brick. No one greeted me as I walked towards the front display, which included a Cambridge tote bag, baseball hats in dusty rose, and a mauve yoga matt. The legging mannequins — which weren’t really mannequins, just identical pairs of legs with right knees popped to round their hollow butt cheeks, all severed at the belly button — sported different legging styles, including the ‘align crop’ and the “fast and free crop”. But almost all the leggings on display were plain black or grey. The only patterned offering was a modest navy-and-white swirl. In fact, all the clothes were in muted tones: black rain jackets and various grey-toned sweat-resistant long-sleeves perfect for the winter hung from the walls. The brightest items in the store, the colored tank tops, were diluted. The yellows looked like whipped butter, the blues like the flesh of a humpback whale.

Before visiting Lululemon, I had imagined that the clothes would be neon — like the hot pink and traffic cone orange leotards of ’80s athleisure, the forebear of the current athleisure trend. But the clothes, rather than calling attention to themselves, called attention to the plastic curves they caressed. The current athleisure trend seems less about the actual clothes than the bodies within them.
Take some of the most notable proponents of the athleisure craze — the Kardashians, women whose names and careers are synonymous with their voluptuous physiques. In the past three years, Kim has sported a gray-scaled rainbow of different biker shorts that cradle her illustrious ass and hips and show off the contours of her body. Instead of leaving viewers to wonder how toned her legs might be under that gauzy skirt, she presents her body in stark relief. Given that Kim’s body is the basis of her business empire (see her perfume bottle from this past April, a miniature mold of her torso), her bodily discipline is equated with her business discipline. Her mastery over her body is equivalent to her mastery over the market. Her legs are the ultimate accessory to, and emblem of, her business savvy.

So, naturally, this Lululemon was entirely organized by body part. As I went deeper into the store, the mannequins became increasingly disfigured. In the front window, they were almost fully intact, just headless. Deeper into the store, in the tank top section, the mannequins were merely flat stomachs with arms. In the very back, the shorts section, they were reduced to mere pelvises. This layout equates a product with a body part, so leggings make you focus on the legs. Shorts, like the “hotty hot” mini spandex shorts, make you focus on the butt. The store’s organization distills the body into different segments, as if each individual part can be perfected if you lavish enough attention upon it.

In the sports bra section of Lululemon, half torsos — shoulders with perfectly formed plastic boobs — modeled bras with straps of varying thickness. I looked at the little chalkboards that named the bras in each row: the “energy bra,” the “forget the rest bra,” the “time to sweat bra” and the “mind over miles bra.” The names endow the clothes with a sense of performance, associating athleisure not just with doing, but achieving.

Unlike most stores in the Square, this Lululemon is a double-decker. The top level, which occupies only half a floor, is an in-store workout area. Lululemon is collaborating with local workout studios, many of which have recently popped up around the Square, to offer free in-store exercise classes.

And yet wearing Lululemon leggings does not always go hand-in-hand with working out in Lululemon leggings. Someone wearing a pair of leggings to class likely didn’t arrive fresh from the gym, beads of sweat plopping onto their desk; nor does it mean the person will work out after class. But athleisure isn’t about actually wearing the clothes to work out, it’s more about performing health. The clothes don’t cover the body but present it: the racerback tanks show off shoulders, the t-shirts cling to stomachs. Wearing Lululemon suggests the person could perpetually be about to work out, as if that person is always on the verge of toning their body with cardio or calisthenics. At the very least passersby know that the wearer is sufficiently conscious of their fitness to own a pair of leggings.

Freshman year, when I would take a break from reading or paper writing to message a friend on Facebook, I often signed off that conversation with the same Facebook sticker. I would type “working” into the sticker search bar and send a graphic of a girl with a millenial pink bob, glasses resting on the crown of her head, squinting at a computer while she rubs her chin in a gesture of thought so intense it becomes physical. The girl has two beads of sweat dripping from her hair, her intellectual quest so absolute it forces her to start sweating. I gravitated towards this sticker because it aligns thinking with physical gestures. Deep thought is a sweat-inducing process, blurring the boundary between mental and physical discipline. Athleisure and sartorial control are attempts to prove intellectual control.

As I left the store, going from the pelvises to the torsos to the legs, and then out the door, I looked back at the front window. Seen through the glass, the isolated parts on show around the store re-configured an almost-entire body. But even the most complete mannequins were still missing heads. Not a single mannequin in the store, I realized, had a head. There weren’t even severed mannequin heads sporting hats. It was left to window shoppers to transpose their own heads atop the severed mannequins, offering a disciplined, plastic and literally sculpted body to the presumably disciplined brains roaming the square. That’s the promise of Lululemon: that a sculpted, controlled physique is not in opposition to a sculpted brain but, instead, is merely waiting to be chosen by a sculpted mind. It will only cost you a couple hundred dollars.

— Magazine writer Jensen E. Davis can be reached at jensen.davis@thecrimson.com. Follow her on Twitter @jensendavis12. This is the first installment of her column, What Are You Lifting?, which will explore different ideas and approaches to health in and around campus.