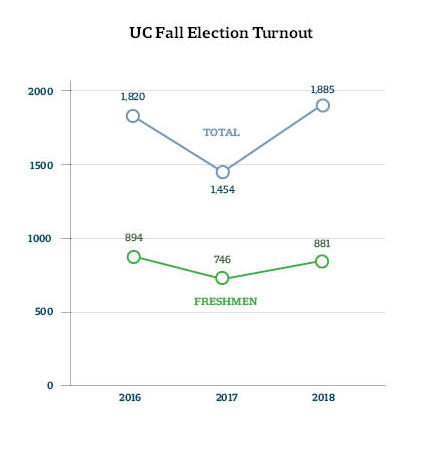 In total, 1,885 students voted in this year's election, held Monday through Thursday. This figure includes 881 freshman students, an uptick from totals in the past two years. In 2017, 1,454 students cast ballots, while 1,820 undergraduates voted in 2016.

Freshmen traditionally vote at higher rates than do their upperclassman counterparts. That trend continued this year. More than 50 percent of freshmen — representing roughly 900 individuals — cast ballots to decide which UC representatives would represent them. As usual, Harvard's sophomores, juniors, and seniors were less engaged. Voter turnout in some houses reached relatively high levels compared to previous years: five separate Houses saw votes from more than 100 students.

Seventy-eight students ran in this week’s election, 36 of whom were freshmen. Both of those figures are lower compared to last year, when more than 100 students — including 60 freshmen — ran for the Council.

The makeup of the new Council will be vastly different from last semester, given nearly half of the representatives elected in the spring refused to run for re-election, resigned over the past few months, or lost in this week’s election. In addition, six former representatives graduated in May.

The finance committee will have to replenish its ranks in the next few weeks, after most of the committee — including its chair, Henry S. Atkins ’20 — decided not to return to the Council.

This week’s UC election was the first to use the Borda count system, a ranked-choice voting method the Council adopted after some members argued it would simplify the election process. The UC voted in early September to abandon the Hare-Clark method, also a ranked-choice system, which representatives said was difficult to explain to voters and made it difficult to tally results quickly.

Multiple races in this week’s elections were quite close, and it is unclear whether the results might have looked different under the old method. In Quincy House, Sung Kwang Oh ’21 defeated Mason G. Meyer ’20 by just over 0.15 points — 18.66 for Oh to 18.50 for Meyer — while in Cabot House, Tauheed Z. Islam ’20 eked out a victory over Karina Dubrovskaya ’21 by less than 0.50 points.

The new Council will convene for its first meeting of the term on Sept. 30. Its presidential election will follow in mid-November.

UC President Catherine L. Zhang ’19 and Vice President Nicholas D. Boucher ’19 — who ran on an ambitious platform that included 39 policy planks — will have significant work to do in order to implement all of their goals by the time they leave office at the end of 2018. According to the Council’s website, the duo has fulfilled roughly 56 percent of its promises.

The full list of newly elected representatives is as follows:

A previous version of this article misspelled the name of Jungyeon Park '20 and misidentified the house to which Park, Julia M. Huesa '20, and and Abigail T. Scholer '21 belong. The trio live in Lowell House, not Leverett House. The story has been updated.