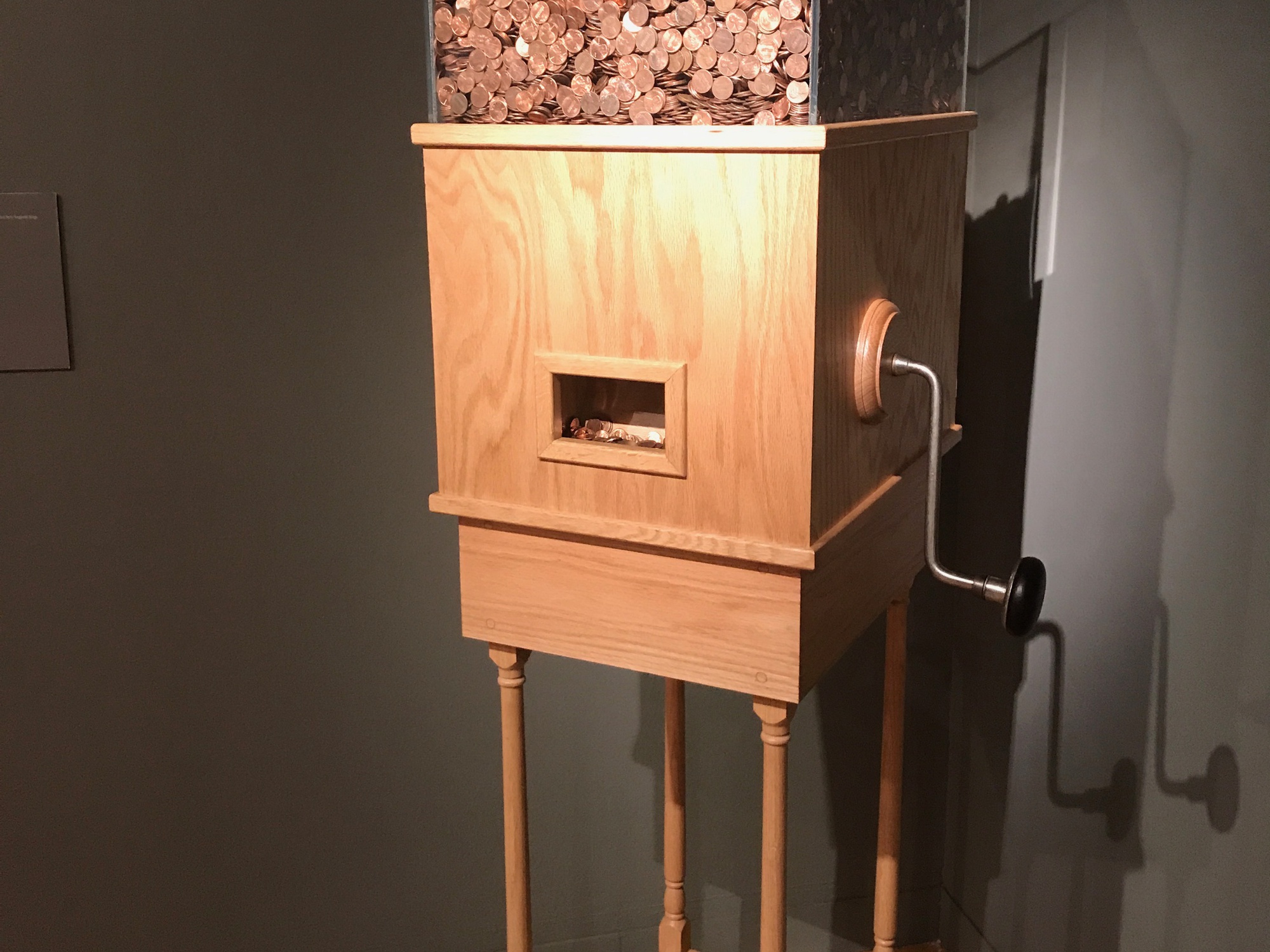 Visitors can crank The Minimum Wage Machine by Blake Fall-Conroy to get one penny every 4 seconds, or $9/hour (minimum wage).
By Rebecca H. Dolan, Crimson Staff Writer 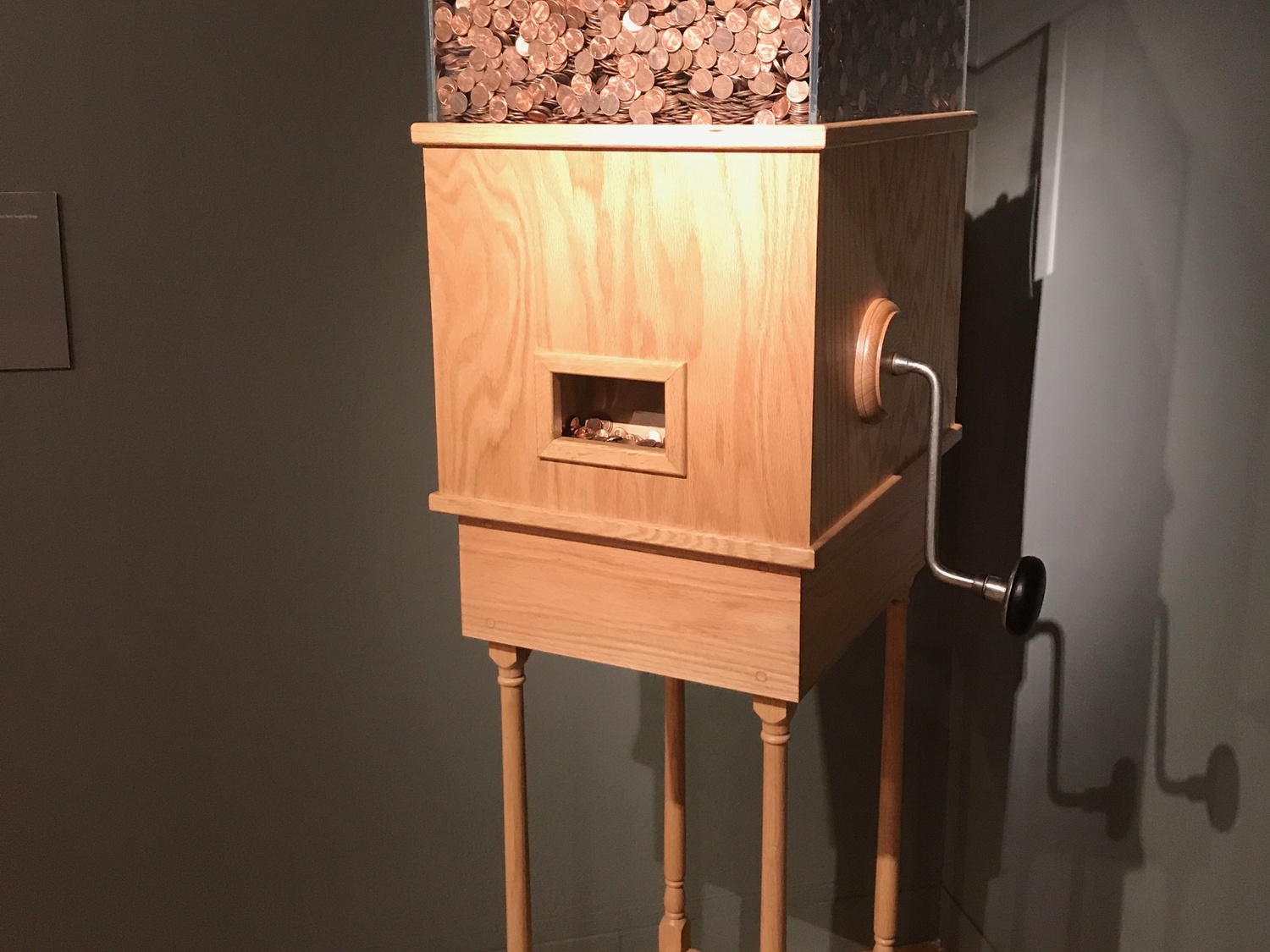 Visitors can crank The Minimum Wage Machine by Blake Fall-Conroy to get one penny every 4 seconds, or $9/hour (minimum wage). By Rebecca H. Dolan

To be clear, “Museum of Capitalism” is a tongue-in-cheek exercise. The show feels as if it’s poking fun at the slightly absurd notion of making a museum about our country’s controversial one-percent-friendly economic principles. There is no definitive pro-capitalist or anti-capitalist stance, but rather a deep inquiry into the (often surprising) effects of American capitalism. The cerebral nature of “Museum of Capitalism” does mean that museumgoers mainly interested in aesthetic stimulation may need to look elsewhere. Most pieces in the show require heavy contextualization.

That said, the exhibition literature is extremely well done. Gallery texts are thorough enough to make the show approachable for the layman of both art and capitalism, and perfect for a university-affiliated space. A standout piece is Tim Portlock’s “CASH_4_GOLD” series of four archival pigment prints reimagining scenes of forclosed houses in San Bernardino, California, as romantic landscapes. The tension between Portlock’s whimsical flourishes and the eery scenes of empty suburbia is both visually interesting and a poignant take on the uncomfortable-to-look-at paradoxes of capitalism. A large portion of the show’s works are found object sculptures, like a 1960s Barbie Dream House or Jennifer Dalton’s “Your Name Here,” a lucite briefcase stuffed with $1,351,220 in credit card offers collected from one person’s mail over a year. One wall of the show is lined with quotes from Martin Luther King, Jr. who wrote critically about American capitalism. Another wall has a video installation of car accident victims reenacting their crashes at abandoned Pontiac dealerships. For those more interested in the strictly financial facets of capitalism, there’s a “Minimum Wage Machine” that you can crank to pump out pennies, a wall of investment guide books burned with the logos of banks closed by the Federal Deposit Insurance Corporation, and a collection of letters celebrating the end of an employee’s long career at IBM.

There’s something for everyone at “Museum of Capitalism,” which is unsurprising considering the “era of capitalism” is still one we’re still living in. Those on the winning and losing sides of capitalist economic policies are equally represented at the exhibition. It’s unexpected and quite innovative to attempt to capture an ongoing, amorphous phenomenon like capitalism in a museum, and “Museum of Capitalism” does a remarkable job.

—Staff writer Rebecca H. Dolan can be reached at rebecca.dolan@thecrimson.com