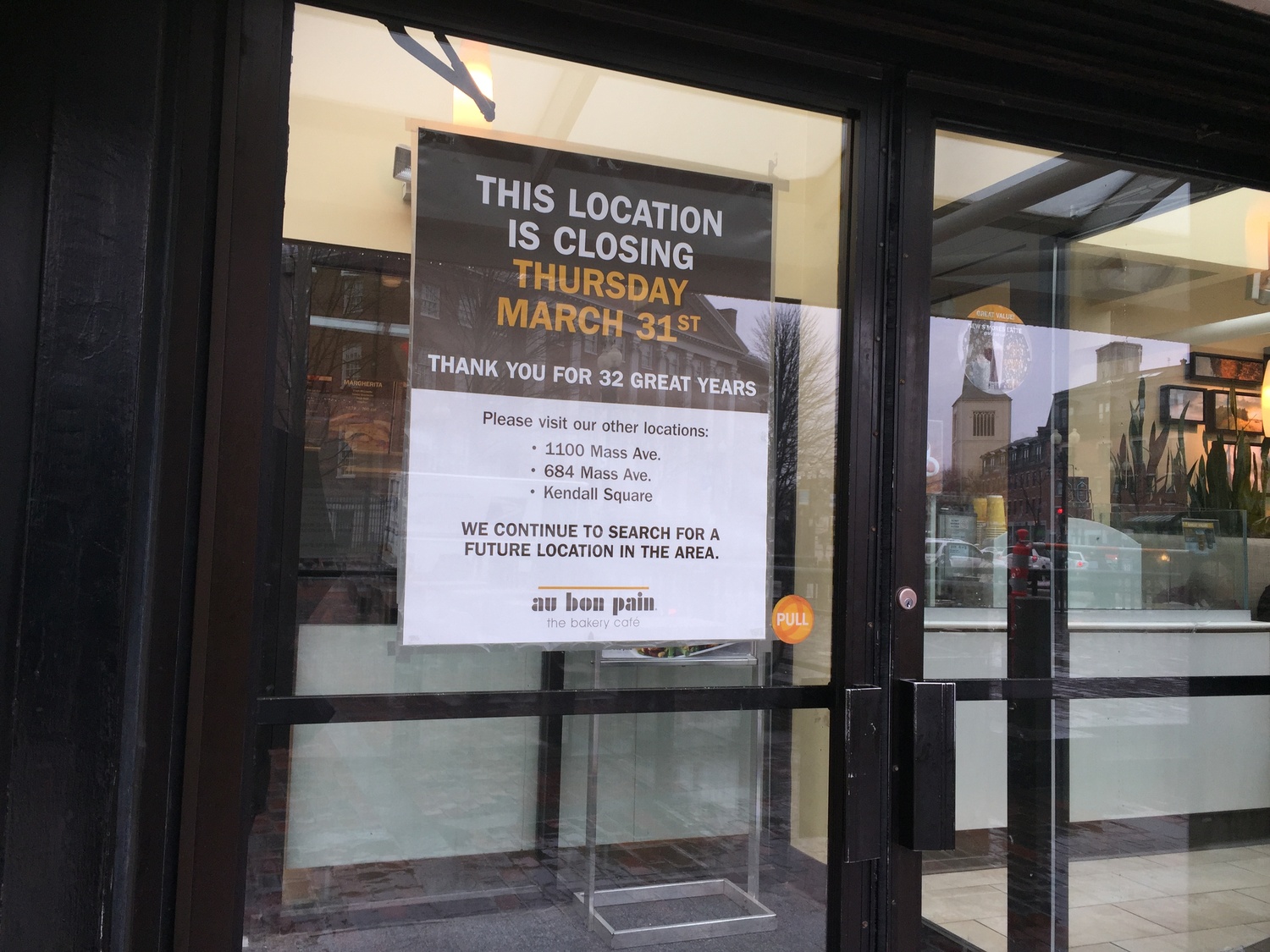 Au Bon Pain closed its last Harvard Square location earlier this month. The chain shuttered another one of its restaurants previously located in Harvard Square in 2016. By Kamara A. Swaby
By Declan J. Knieriem and Katelyn X. Li, Crimson Staff Writers

The restaurant — which closed Jan. 8 — announced its departure to customers in a Jan. 4 email, joining Crema Cafe, Chipotle, Tealuxe, Urban Outfitters, and Sweet Bakery in departing from long-held locations in the Square since the start of December.

The fast casual bakery-cafe chain, which opened its 1100 Massachusetts Ave. location in 1990, offers an array of soups, sandwiches, and pastries. It takes its name from the French translation of “from good bread.”

Consumer spending habits, market saturation, and changing loyalties are among the most prevalent reasons for Au Bon Pain’s departure, according to Harvard Square Business Association Director Denise A. Jillson. Jillson wrote in an email that this recent flood of Harvard Square closings is not uncommon and represents the natural business cycle of the area.

“While the closing of Au Bon Pain will undoubtedly leave some folks inconvenienced and sad, others will eagerly anticipate a new enterprise,” Jillson wrote. “This is the ever-changing nature of a robust business district where, for the most part, the consumer decides who stays and who goes.”

Au Bon Pain Co. media did not respond to a request for comment.

The recent closure marks the chain’s final departure from Harvard Square. In 2016, Au Bon Pain’s Smith Campus Center location, made famous after appearing in 1997 film “Good Will Hunting,” closed its doors for major building renovations that were completed this past fall.

Linda A. Kidwell said she was a frequent customer of Au Bon Pain because of its affordability and commitment to fresh foods. A former Harvard employee in the Student Billing Office, she recalled her sadness over the closing of the Smith Campus Center location nearly three years ago.

“[Au Bon Pain] was part of my daily experience there, so I’m sorry to see it go,” she said of the recent closure. “I think it was a great little place. There weren’t that many of them in those days, so it was special.”

Though she said she believes most of her peers were unaware of Au Bon Pain’s existence, Allie Quan ’21 said the restaurant occupied a special place in her heart. Whenever she fell ill, Quan said she could always count on Au Bon Pain to deliver comfort in the form of soupy sustenance.

“This is literally the only place that I found I could get chicken noodle soup nearby, so I’m not really sure what I’m going to do now,” Quan said. “I’m confused, horrified, sad.”

Hungry Cambridge residents looking to treat themselves to a soup or sandwich can still satisfy their cravings at four nearby Au Bon Pain restaurants: one located further down the street at 684 Mass. Ave., as well as three others in Kendall Square, Davis Square, and the Cambridgeside Galleria.

—Staff Writer Katelyn X. Li can be reached at katelyn.li@thecrimson.com.