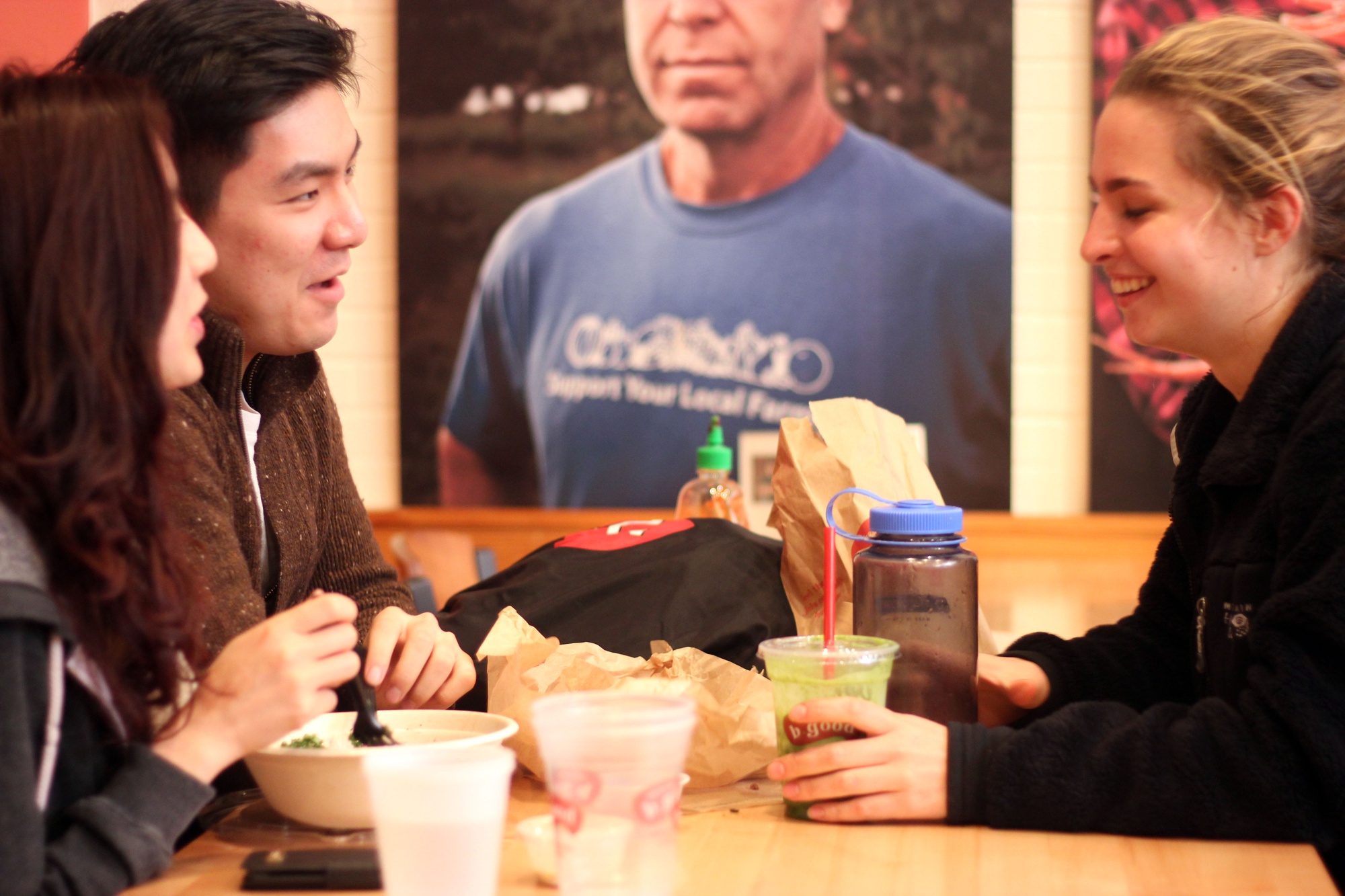 Cassie C. Wang ’17, Evan Hahn ’17, and Charlotte J. Solmssen ’17 enjoy a meal at Harvard Square’s b.good location before it shut it doors for good on Tuesday after more than 10 years of operation. The restaurant is looking for a new location in the Square to reopen after it was forced to close the Dunster Street location because of renovations to the Smith Campus Center.
By Joshua J. Florence and Junina Furigay, Crimson Staff Writers

Harvard is requiring that many favorite local eateries leave the Smith Campus center as construction begins in earnest next week.

Au Bon Pain and Clover Food Labs close their current locations on Thursday, b. Good closed Tuesday, and Oggi has already move to a new location.

Some of those restaurants, the names and staples of the Harvard experience for students, face uncertain futures in the Square after they leave the campus center by early April. 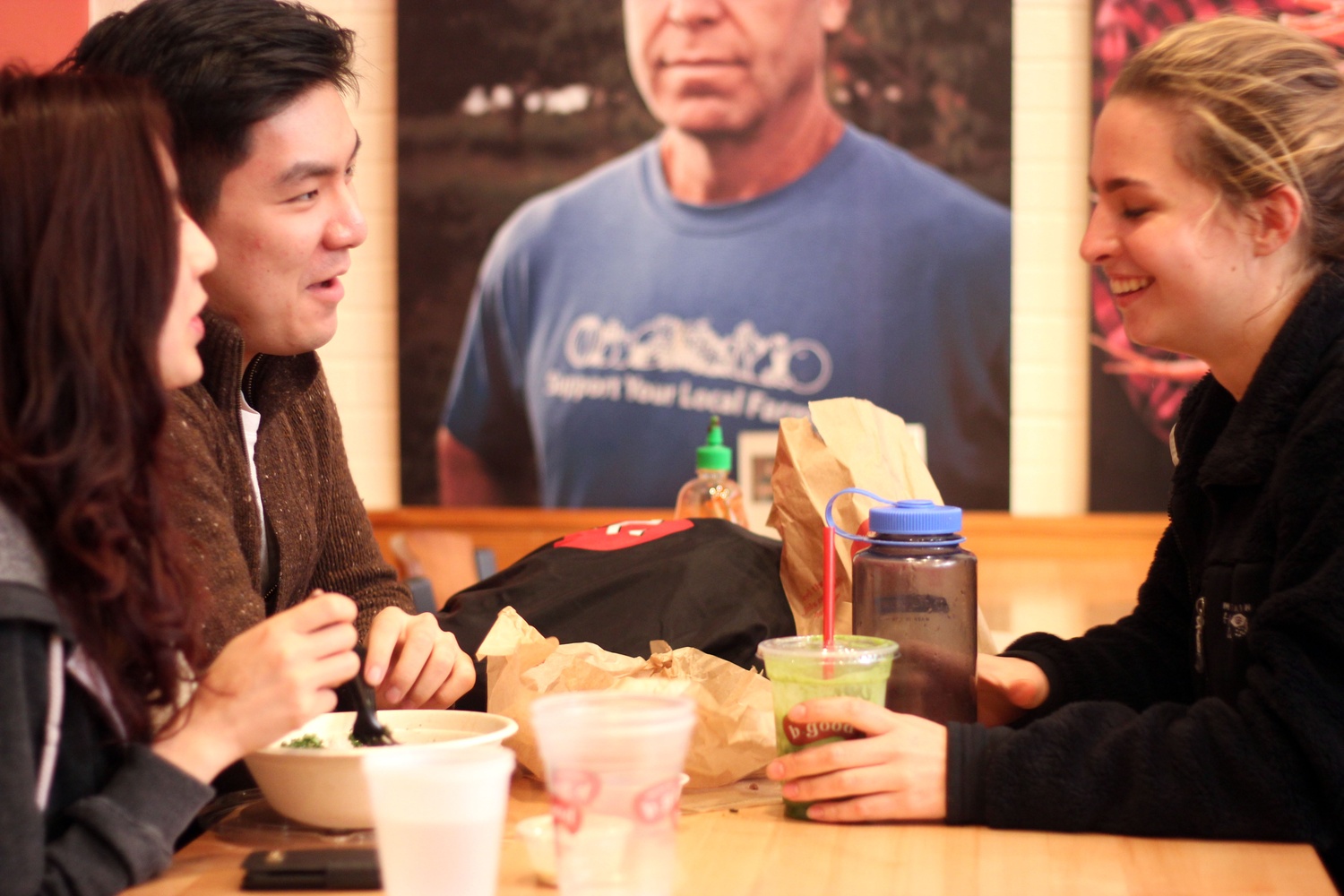 Cassie C. Wang ’17, Evan Hahn ’17, and Charlotte J. Solmssen ’17 enjoy a meal at Harvard Square’s b.good location before it shut it doors for good on Tuesday after more than 10 years of operation. The restaurant is looking for a new location in the Square to reopen after it was forced to close the Dunster Street location because of renovations to the Smith Campus Center. By Lauren A. Sierra

In their place, impending renovations for the Campus Center—which will span three floors and feature a network of meeting rooms and common spaces—will begin in the coming days and last until the Center’s opening in 2018, according to Harvard Spokesperson Brigid O’Rourke.

University planners told business last year they must vacate their current spaces by the spring. Clover CEO Ayr Muir said he first learned about “getting kicked out” last April and that Harvard asked him to not talk about the forced move.

“Normally we are very transparent about what we do, but Harvard had asked us not to talk about getting kicked out,” Muir said. “We were very quiet.”

O’Rourke declined to comment on the impending departures and individual dealings with businesses.

Many of the establishments, such as Clover and Oggi, have already secured new storefronts in the Square, but other companies like Au Bon Pain, Al’s, and b.good are still on the hunt. The University has not indicated whether restaurants will be able to move back to the Smith Center after construction finishes.

Popular restaurant b.good has been searching for over a year and hopes to acquire a new space in Harvard Square in the next couple of months, according to the company's CEO Anthony Ackil ’99. Ackil said he was told b.good must leave the campus center by March 30, and that finding new real estate has been a difficult process.

“Harvard Square is really tight right now,” Ackil said. “The rents are crazy and there are not a lot of openings for small companies like us.”

Even for some businesses that have been able to successfully relocate, the process has been fraught. Muir said Harvard gave him a narrow timeline to make the move. Clover’s last day in its present location is this Thursday, and by Friday, Muir said he plans to open the eatery’s new Massachusetts Ave. location.

“We asked Harvard for a couple more days, but they didn’t give it to us,” Muir said. “So we really have to get it done on time because you can’t have hourly employees be out of work for a few days. We needed to consider people’s jobs too.”

O’Rourke declined to comment on the University's interactions with Clover restaurant.

Closing restaurants hosted celebrations in their final days and offered special deals to loyal customers. B.Good had customers pay what they wished on its final day in the Square on Tuesday and donated the proceeds to charity.

The restaurants are leaving just as the construction gets underway. Fences will surround the Smith Center with rotating entrances beginning Monday, and planners will make intermittent changes to the entrances and exits, as well as some temporary sidewalk and street closures for the duration of construction, according to O’Rourke.

Despite the changes and construction work, the Campus Center and many of the Harvard offices it houses, including Harvard University Health Services Urgent Care, will remain open throughout the entire renovation process.

Renovations to the Campus Center, announced in 2013, will continue in phases until the fall of 2018, when the building is currently scheduled to fully reopen.

“Many offices within the building will remain open throughout the duration of the project, and employees of these offices will continue to have access to the building,” O’Rourke wrote. “Harvard will coordinate all closures with the City and will proactively communicate any updates to interested parties via its website, email notification lists, on-site signage and project boards.”