A Decade in Review: Science Fiction 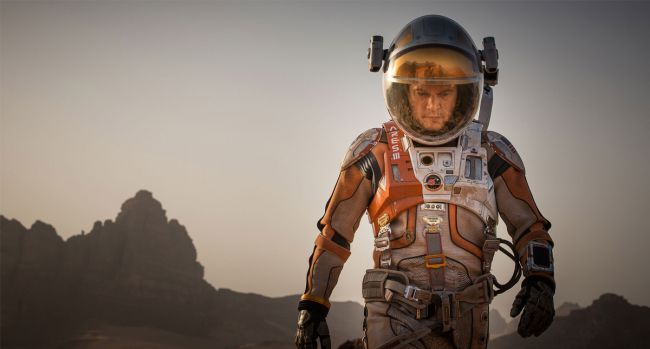 As the 2010s come to a close, the "Decade in Review" series will seek to unravel the best 10 best films from the 10 biggest genres of the decade. Now that every notable wide release science fiction film has been released, science fiction will serve as the first entry in the 10-part series. From $300 million budget box office behemoths to meticulously constructed auteur masterpieces, science fiction has certainly provided some of the widest ranges of films to pick from. Note that this particular ranking does not include superhero films, which often overlap with science fiction, since they have grown into a genre in and of themselves.

Scott's "The Martian" is a surprisingly comedic science fiction film, especially considering it's by a director who revolutionized the genre with groundbreaking pictures "Alien" (1979) and "Blade Runner" (1982). When botanist Mark Watney (Matt Damon) is trapped on Mars when his crew mistakenly leaves him behind in a dust storm, he needs to find a way to keep himself alive and find a way back home. With its quippy, dialogue-driven script, "The Martian" breezes through its 141 minute runtime and lands comfortably at the number 10 spot.

Every frame of “Gravity” conveys the most realistic depiction of space committed to film. Cuarón transforms "Gravity" into an unforgettably ethereal adventure with groundbreaking visual effects and gorgeous cinematography that immerses the audience in the hostile vacuum of space. Adding Sandra Bullock’s commanding lead performance to the mix leaves one with a powerful experience, even if it lacks the narrative heft of Cuarón's other films.

Gray's introspective "Ad Astra" is a powerful meditation of loneliness that ranks amongst the finest science fiction think pieces in recent years. It ticks all the boxes: a haunting score from Max Richter, a superb leading performance by Brad Pitt, and stunning cinematography from Hoyte van Hoytema. One might argue that "Ad Astra" is hindered by mild tonal mismatches and occasionally glacial pacing, but these choices are ultimately justified by the film's poignant — if slightly overstated — conclusion.

7. "Dawn of the Planet of the Apes" (2014), Dir. Matt Reeves
A sprawling epic that merges cutting edge technology with thematic gravitas, the "Planet of the Apes" reboot trilogy is one of the most consistent science fiction trilogies of all time. With Andy Serkis arguably giving a career-best motion capture performance as Caesar, an ape who is the embodiment of a character that transcends the technology it's rooted in: It's fascinating how much humanity Serkis can express using predominantly his eyes and body language. Any film of the trilogy could have found its place on this list, but "Dawn" feels like a more mature, more political evolution of "Rise," while avoiding the protracted conclusion of "War": It's fast-paced, Shakespearean, and thoroughly immersive.

Johnson exploded onto the science fiction scene with "Looper," his first big-budget film. In the near future, when time travel is possible (but instantly outlawed), criminal organizations send their enemies back in time to be disposed by contracted assassins called "loopers." Starring Bruce Willis and Joseph Gordon-Levitt as a looper sent back in time to kill himself and "close his loop," "Looper" combines mind-warping time-travel logic with surprisingly hopeful themes of change and tolerance.

Joaquin Phoenix is one of the best actors of his generation. From the physicality he brings in "Joker," to the cunning he embodies in "Gladiator," Phoenix is a magnetic screen presence in whatever film he is in. Jonze guides Phoenix into one of his most subtle performances in "Her" as an introverted man in the near future who falls in love with his virtual assistant (Scarlett Johansson). "Her" is so poignant because it never feels too dystopian; it's understated, natural, and feels like a natural progression of today's society.

A long time ago, in a galaxy far far away, "Star Wars" seemed destined to have concluded its legendary theatrical run when George Lucas' prequel trilogy bowed out of cinemas in 2005. But after Disney acquired Lucasfilm in 2012, it did so with hopes of producing another sequel trilogy, and while the latest installment, "The Last Jedi," has certainly been divisive, most can agree that "The Force Awakens" marked a promising re-launch of the storied saga. While it blatantly panders to fans with a plot ripped directly from "A New Hope," "The Force Awakens" sets up interesting new characters and worldbuilding that sparked excitement upon its release. Complete with gorgeous cinematography and a return from legendary composer John Williams, "The Force Awakens" does its job in reinvigorating nostalgic fans and converting new ones.

Villeneuve tells an innovative nonlinear story of tolerance and understanding through first contact, all while rooting "Arrival" in a riveting personal journey through grief, loss, and acceptance, through a standout, masterful performance by Amy Adams. The first-contact part of the story is unflinchingly realistic, uncannily timely (given today's political climate), and leaves one thinking for days. When Villeneuve begins to weave these two central plot threads together (and he does so seamlessly), "Arrival" transcends both of its stories to remarkably beautiful — and shocking — effect.

With a layered plot that weaves between multiple levels of dreams, and an ensemble of A-list actors all vying for screen-time (Leonardo DiCaprio, Marion Cotillard, Joseph Gordon-Levitt and Tom Hardy to name a few), "Inception" somehow manages to still tell a tightly plotted, effective story. It's a reminder that blockbusters can be successful without underestimating the audience: "Inception" is an interactive experience that requires as much of viewers as the best think pieces in the genre, and does so in gloriously high-budget fashion.

Denis Villeneuve is the only returning director on this list, and it's not without good reason. Arguably just as thought-provoking, thematically profound, and visually splendid as Ridley Scott's noir masterpiece "Blade Runner," Denis Villeneuve's highly awaited follow-up is a meditation on what it means to be human. Set 30 years after its predecessor, "Blade Runner: 2049" is content with telling its own story, not relying too heavily on the original, and it's all the better for it. Featuring some of the finest cinematography of all time, and earning Roger Deakins his well-deserved first Academy Award after 14 nominations, every frame of "Blade Runner: 2049" is a work of art. From the brown, depersonalizing hues of Tyrell Corporation to the vibrant neon of Los Angeles, Deakins' work here will inspire a new generation of filmmakers. Simply put, "Blade Runner: 2049" is perfectly cast (with Ryan Gosling as the stoic Officer K and Harrison Ford returning as Rick Deckard), impeccably shot, and is a natural thematic progression from Scott's science fiction classic; in other words, it is a well-deserved number one pick.
—Staff writer Lanz Aaron G. Tan can be reached at lanzaaron.tan@thecrimson.com.