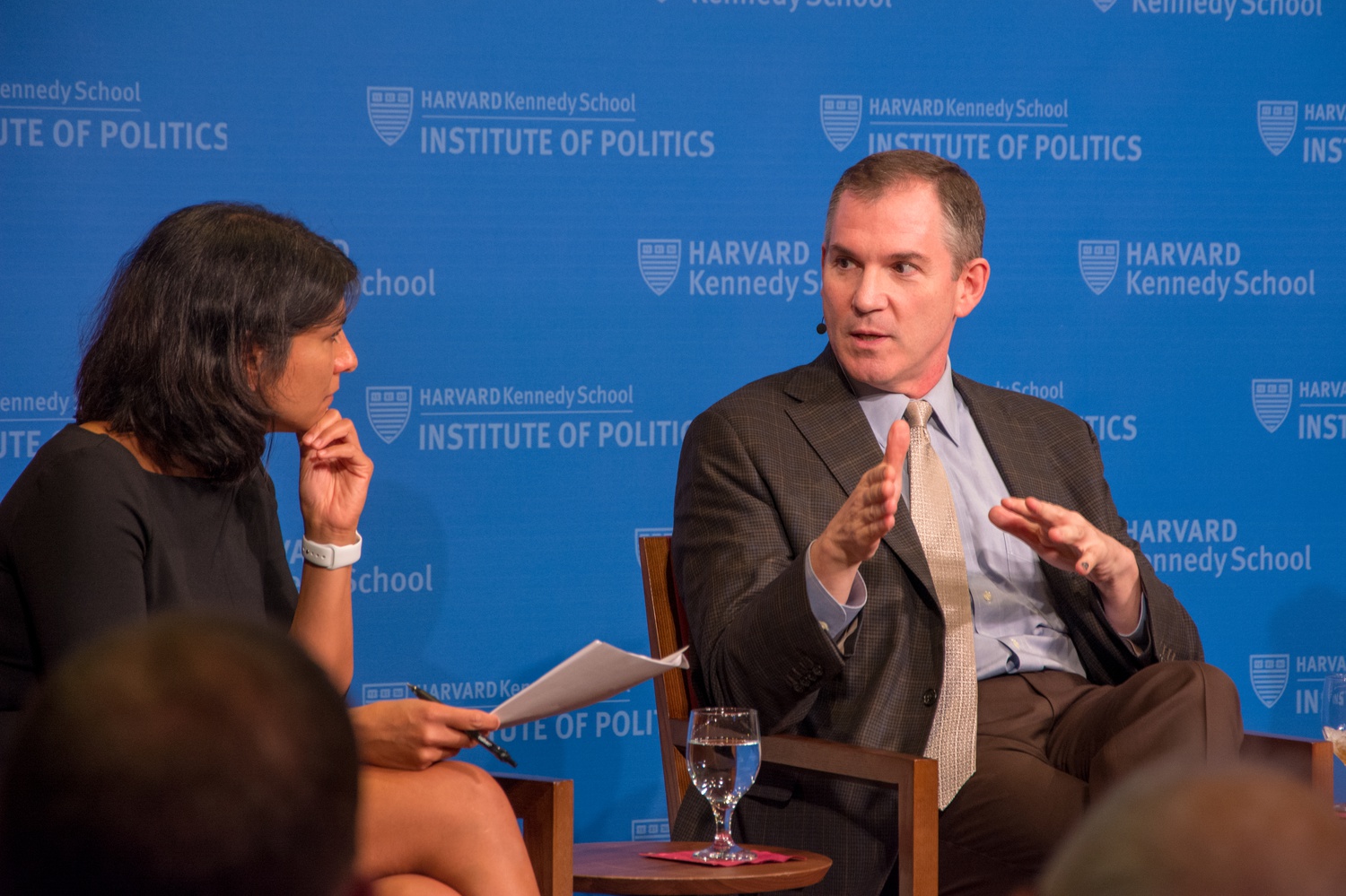 Several political analysts shared their perspectives on the 2020 presidential election and various candidates at the Institute of Politics Thursday in a panel discussion in the JFK Jr. Forum.

The discussion featured political experts Frank Bruni, Amy Walter, and David Axelrod – a New York Times op-ed columnist, national editor of The Cook Political, and former senior advisor to President Obama from 2009 to 2011, respectively. It was moderated by Maya Sen ’00, a professor of public policy at Harvard Kennedy School.

Though the evening kicked off with a question about the upcoming Kentucky and Missouri gubernatorial elections, the discussion quickly turned to the 2020 presidential election field. The panelists noted the emergent theme of nationalization in the race, the way in which local and state elections have become inextricable from federal politics.

Walter said the “nationalization of races” poses a problem for Demoratic candidates running for office in red states where Republican candidates align themselves with the Trump presidency, while the Democrats must run as outsiders.

“And so that's the question: Can a Democrat still win on local issues at a time when the nationalization of our politics is so intense?” Walter asked.

Walter added that Democrats appear deeply anxious about choosing a candidate that can pose a threat to Trump’s electoral chances in the general election.

“On top of all of it is the deep worry among Democrats that they're going to lose to Donald Trump,” she said.

While Walter said that Senator Elizabeth Warren (D-Mass.) — who is leading the polls — is a deft candidate, she said Warren has not yet captured the support of groups that currently serve as key constituencies in the Democratic party and seem to be supporting former vice president Joe Biden.

Axelrod also said he admired Warren’s campaign but had doubts as to whether her positioning herself as a “fighter” will be received well by Democrat voters who are tired of how combative Washington has become.

He also said there is a “pervasive” sense of exhaustion among American voters.

“[Warren] is a pugilist,” Axelrod said. “And the question is, at the end of the day, is the most effective message the message that says ‘I’m going to fight every day?’ Because we’re fighting every day.”

Bruni also said he did not think it would be a wise strategy for the Democratic nominee, whomever is chosen, to “fight” Donald Trump directly in the General Election.

“I feel very strongly that whoever gets the nomination should talk about Trump as little as possible, because people know what he's doing, what he's done, who he is – and what I think they want to hear is what you’re trying to fix” Bruni said.

K. Oskar Shultz ’22, an attendee at the forum, said that Axelrod’s point about national exhaustion particularly resonated with him.

The panel concluded with a discussion about the impact Trump impeachment proceedings might have on the Democratic primary.

Axelrod said the impeachment might pose a difficulty for the Democratic candidates who currently serve as senators — including Warren, Kamala Harris (D-Calif.), Cory Booker (D-N.J.), Bernie Sanders (D-Vt.), and Amy Klobuchar (D-Minn.) — if the proceedings occur around the Iowa Caucuses Feb. 3.

“Rather than being in Iowa and campaigning, they’re going to have to be at their desks in Washington,” he said.