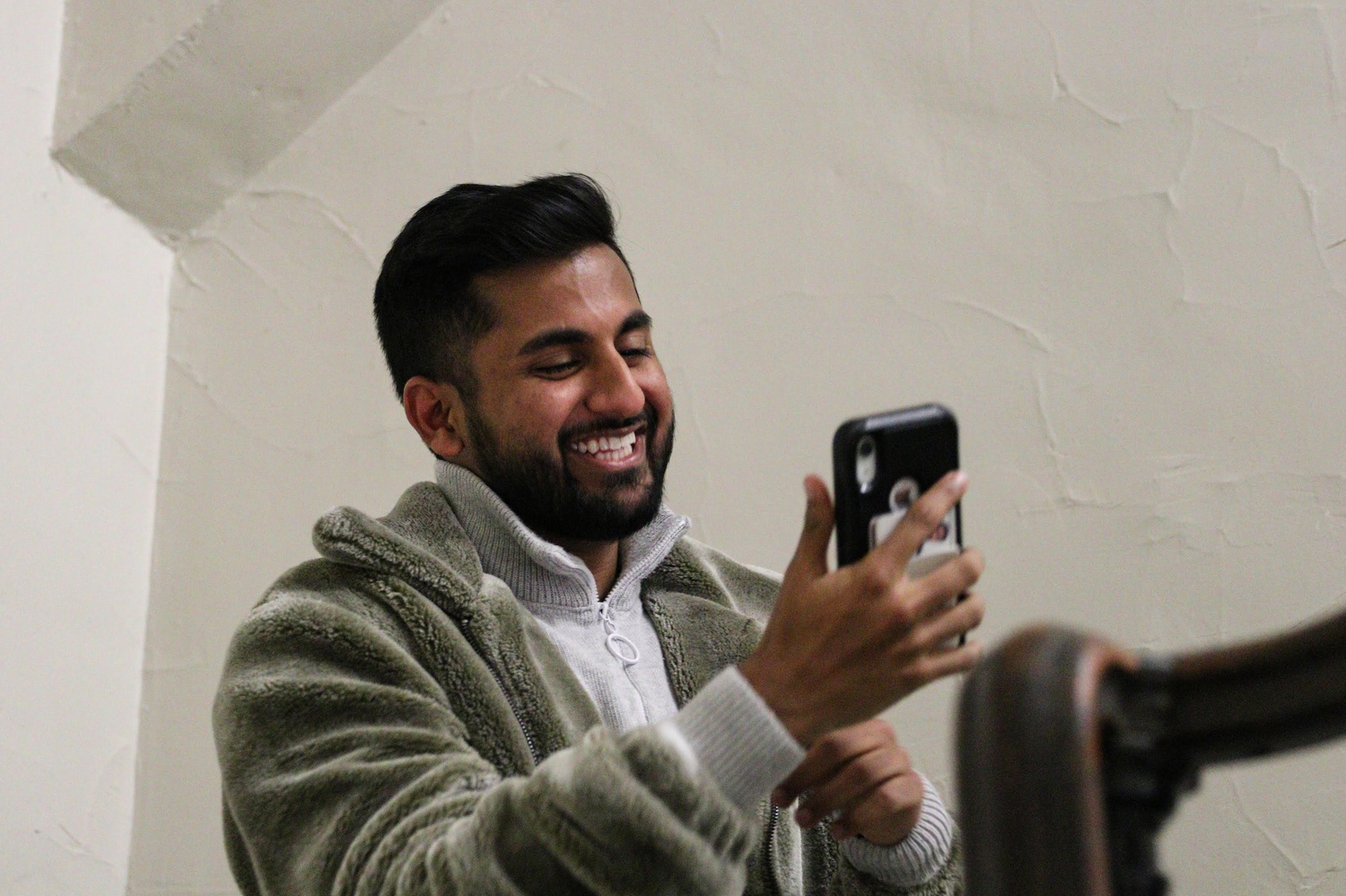 James A. Mathew ’21 learned Thursday night he will serve as the president of the Undergraduate Council next year at an Eliot House watch party. By Amy Y. Li
By Kevin R. Chen, Crimson Staff Writer

James A. Mathew ’21 and Ifeoma “Ify” E. White-Thorpe ’21 will lead the next session of the Undergraduate Council as president and vice president, respectively, despite not receiving the most first-choice votes, the UC Election Commission announced Thursday night.

Mathew and White-Thorpe ran on a campaign to foster inclusion and improve student wellness and safety under the slogan “Harvard Can’t Wait.” Mathew is a Mather House resident who serves as one of two chiefs of inclusion and belonging on current UC President Sruthi Palaniappan ’20 and Vice President Julia M. Huesa’s Executive Cabinet. White-Thorpe, a Leverett House resident, has served on three UC committees and is currently the UC’s head of communications and chair of its Black Caucus. They will take office in December.

Student turnout for UC presidential elections has increased significantly over the past few years. A total of 3,672 students voted in this year’s election, a 31 percent increase from the 2,797 students who voted last year.

Mathew and White-Thorpe’s platform lays out three main goals: advocate for inclusion and belonging on campus; innovate solutions to problems; and foster a “community-oriented” student experience, according to their campaign website. The duo also proposed creating a “Unity Caucus,” a group of UC members and other students that collaborates on legislation and other projects.

Mathew and White-Thorpe declined to comment for this story.

Several students said they are excited for Mathew and White-Thorpe’s term on the council.

“I’m very happy that James and Ify won,” Aman Panjwani ’20 said. “I think James especially was a great person to bring the campus together and embrace the diversity that we need on this campus.”

Panjwani added that he hopes Mathew and White-Thorpe will embrace some parts of the other tickets’ platforms as well.

“I think their campaign was really well-integrated,” Hampton said. “It makes sense that they won, and I’m excited to see what they do with their term.”

The UC Election Commission also announced the results of the referenda on the ballot. The Council voted last week to split the three referenda that gained enough signatures to appear on the ballot into seven separate statements.

The statement asking whether the University should commit to divesting its endowment from the fossil fuel industry by Earth Day 2020 earned support from 69.3 percent of student voters, slightly down from the 71.5 percent of voters who supported fossil fuel divestment last year.

Meanwhile, 72.5 percent of voters agreed that the University should adopt the reinvestment principles of Fossil Free 350 — a reference to the organization 350.org, which urges institutions to make investments that promote social equality and ecological well-being. Roughly 82.2 percent voted in favor of the University publicly disclosing its investments in the fossil fuel industry.

University administrators have long contended that the University’s endowment should not be used as a tool to enact social change. Instead, University President Lawrence S. Bacow has argued Harvard must work with industry players to combat climate change.

The referendum to merge BoardPlus and Crimson Cash into a single system won overwhelming support from students with 91.2 percent voting in favor. Currently, as a part of the undergraduate meal plan, students receive $65 of BoardPlus per semester to spend at Harvard University Dining Services cafes and House grilles. Crimson Cash may be used for laundry, printing, and at various restaurants and stores both on and off campus. The proposed single system would allow students to choose to spend combine their BoardPlus and Crimson Cash for any of these purposes.