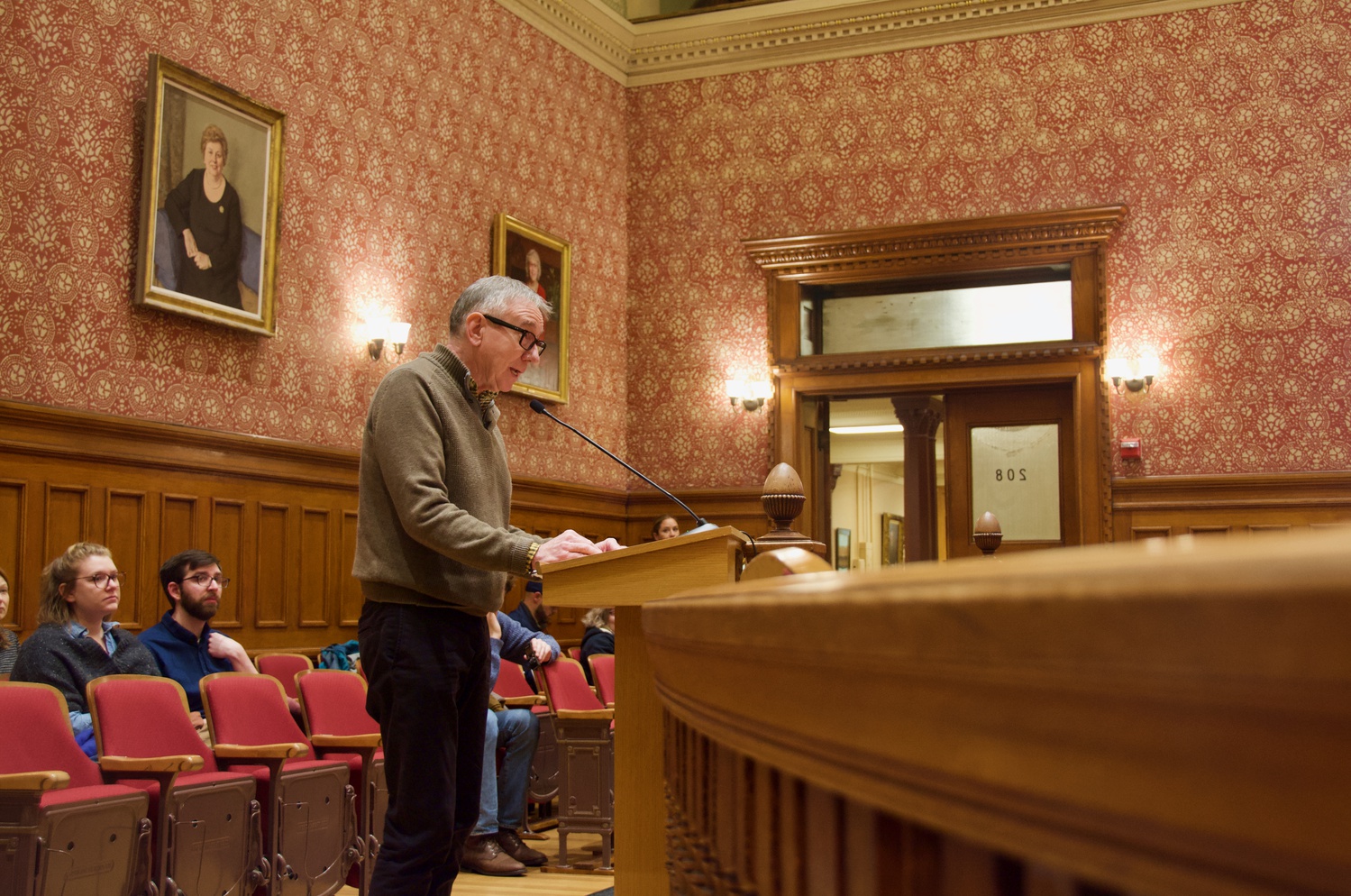 The widow of the woman that died during the vehicular accident at Harvard Square earlier this semester spoke out about traffic safety at City Hall. By Jenny M. Lu
By Declan J. Knieriem, Katelyn X. Li, and Oliver L. Riskin-Kutz, Crimson Staff Writers

Following testimony from Richard M. Curran, the husband of the victim of a fatal September crash, the Cambridge City Council debated measures to improve pedestrian safety in Harvard Square at its Monday meeting.

Curran’s late wife, 67-year-old librarian Sharon Hamer, whom he described as “queen of the one-liners,” was struck by a truck and killed while attempting to cross the street outside a crosswalk on the morning of Sept. 17.

“Respectfully, given the present lack of clear and bold safety features in Harvard Square, to call it a super-crosswalk is absurd,” Curran said in a public comment to the council.

“I challenge anyone here to look at Harvard Square from Google Earth and tell me where the crosswalks are,” he added. “For me, sadly, there’s nothing super about the Harvard Square crosswalk.”

The city refers to the crosswalk between the Harvard Square Kiosk and the Harvard Coop as a "Super Crosswalk."

Curran said he is conducting his own “search for answers,” trying to find eyewitnesses to the crash while he waits for the Massachusetts State Police investigation to conclude, which he contended could take “long time,” given the length of past reviews.

The Massachusetts State Police did not respond to a request for comment.

Cambridge resident Oscar A. Peña said he hopes Hamer’s death will prompt the city to add signage to the Square.

“In Harvard Square, I think they gotta get more signs because there's a lot of people walking all the time,” Peña said. “Sometimes, especially for the elderly people, they have a problem.”

Devereux thanked Curran for his attendance, and called him “brave” for speaking at the meeting. She noted the reconstruction of the plaza presents a “beautiful opportunity” for rethinking safety in the Square.

“I've actually spent quite a bit of time with him, including standing for about a half an hour last week in front of the Coop just to look at the traffic going back and forth and to talk about sightlines and visibility,” she said during the meeting. “And I think he's absolutely right that the super crosswalk is not so super.”

Councilor Quinton Y. Zondervan said the city should continue to look at the possibility of making Harvard Square a “car-free zone.” Several councilors, including Devereux, have proposed the idea in the past.

“We've been over this before,” Zondervan said during Monday’s meeting. “And we shouldn't have to wait until somebody dies before we look at this.”

The city will hold an open meeting on Dec. 5 in the Smith Campus Center in order to discuss safety improvements in Harvard Square and gather public feedback on the plaza reconstruction.