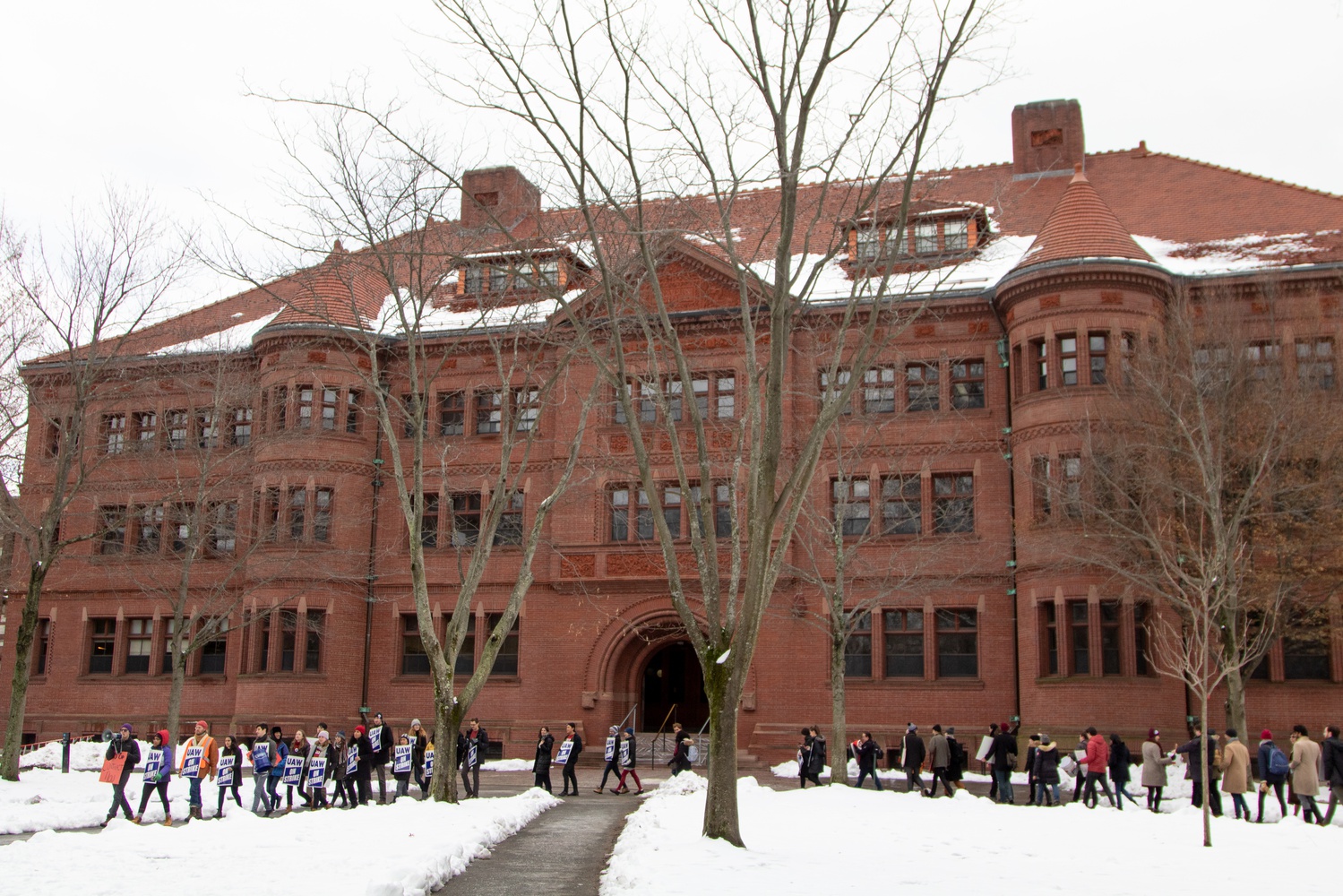 Several academic departments across the University emailed graduate student teaching staff asking whether they are participating in the graduate student union’s strike this week, prompting anger among union members.

Harvard Graduate Students Union-United Automobile went on strike Tuesday after more than a year of contract negotiations with the University. Despite the 12 tentative agreements the two parties have reached, differences remain on key contract provisions including compensation, health benefits, and grievance procedure for sexual harassment and discrimiantion complaints.

The memo — originally sent out to Government department affiliates by Chair Jeffry A. Frieden — was posted in part on Twitter by union members. Frieden informed graduate students that they are responsible for reporting whether they are working and that those who strike should not expect to be paid. Frieden also reminded faculty that they are “management” and are still responsible for their “instructional responsibilities.”

In a separate email, the department asked graduate students teaching fellows whether they are striking.

“The Department, meaning I in my official capacity as Department Chair, has emailed all graduate students who are serving as Teaching Fellows to ask if they are working,” Frieden wrote in an emailed statement. “We are collecting that information, as requested by the administration.”

In preparing to send out the memo, the Government department consulted University administrators, according to Harvard spokesperson Jonathan L. Swain. Though other departments in the Faculty of Arts and Sciences later sent similar memos detailing teaching responsibilities to their graduate students and faculty, they did not do so under the instruction of the University, Swain wrote in an emailed statement. The University did, however, ask departments to collect information about individual teaching fellows' strike status.

Administrators at Harvard Divinity School, the Physics department, and the African and African American Studies department also sent emails to graduate students asking whether they are striking or not.

“Please respond to this email to confirm whether or not you intend to fulfill your responsibilities as a Teaching Fellow,” reads a segment included in many of these emails. “Please note that by not responding to this message, you are confirming your decision to strike.”

It is unclear whether the Divinity School, the Physics department, or the African and African American Studies department also sent the memo reminding students and faculty of their teaching responsibilities.

But some departments declined to send either the memo or an email asking students to report their strike participation.

Divinity School Dean David N. Hempton emailed students asking whether they will fulfill their teaching duties in an attempt to collect information about “matters of payroll.”

“Due to the timing of the strike and the closing of the payroll period, all teaching fellows will receive their regular pay for December, whether they strike or not,” Hempton wrote. “Future decisions about payroll matters will necessarily be determined by Harvard’s central administration.”

The union organizing committee later wrote letters to department chairs stating that they are concerned about emails asking faculty members to report graduate students’ strike status, according to a copy of a letter obtained by The Crimson. The union’s letter stated that administrators may use the information to “dock students’ pay,” and it urged department chairs to “proceed with more caution” when distributing work to department members.

“We’re concerned that members of the Harvard community are being given new managerial responsibilities they have never before had to shoulder,” the union wrote.

In an email to members, the union’s organizing committee provided suggestions on how members should respond to these kinds of requests. In the email, they addressed academic responsibilities, teaching responsibilities, and strike benefits.

“As suspected may happen, the Harvard administration started attempting to intimidate student workers from striking, rather than devoting time to bargaining a fair union contract,” the organizing committee wrote. “We believe that these emails are primarily intended to intimidate, as depending on email non-responses from student workers is unlikely to be a reliable indication of who is participating in the strike.”

Swain wrote in an emailed statement that strikes are not “secret actions,” and therefore student workers on strike should not expect to be paid. Swain also referred back to a University-wide email from University Provost Alan M. Garber ’76 last week in which Garber wrote that retaliation is against the law and University policy.

“For multiple reasons, including considerations for compliance with federal laws, the University has an obligation and a legal right to track whether work is being performed or not, and to use that information to determine whether or not a worker will be paid,” Swain wrote.

Former Chairman of the National Labor Relations Board William B. Gould IV that there is nothing “inherently unlawful or improper” about departments asking students whether they are on strike.

“What can be potentially ominous from the employee’s perspective is the fact that if you are on strike, you can be temporarily replaced and be permanently replaced,” Gould said.

Gould said that though employers are legally allowed to temporarily or permanently “replace” striking employees, they cannot disrupt or change employment relationships because employees engage in a strike.

“There have not been many strikes in higher education in these kinds of jobs,” Gould said. “We’re really travelling down unchartered territory”

HGSU did not respond to a request for comment.

Germanic Languages and Literatures Chair Alison F. Johnson said she refused to ask graduate students in her department whether they are working during the strike.

“I don’t think you should impute a position about responsibilities and obligations to Harvard based on failure to answer an email,” she said. “People have the right to define their position themselves in their own voices, and they should not be bullied or threatened or harassed into a position that they haven't declared themselves to hold.”

Swain declined to comment on Johnson’s comments, but referred back to Garber’s email, which stated that faculty and staff “must fulfill their academic responsibilities to their students.”

A previous version of this article misattributed the quote, “For multiple reasons, including considerations for compliance with federal laws, the University has an obligation and a legal right to track whether work is being performed or not, and to use that information to determine whether or not a worker will be paid,” to an email by University Provost Alan M. Garber '76. In fact, the quote comes from an emailed statement by University spokesperson Jonathan L. Swain.

A previous version of this article stated that the University did not instruct departments to send out memos similar to the one the Government department sent to its affiliates. To clarify, these memos reminded graduate students and faculty of their teaching responsibilities and are separate from communications that asked invididual teaching fellows their strike status. The University did instruct departments to collect information about which workers are striking.