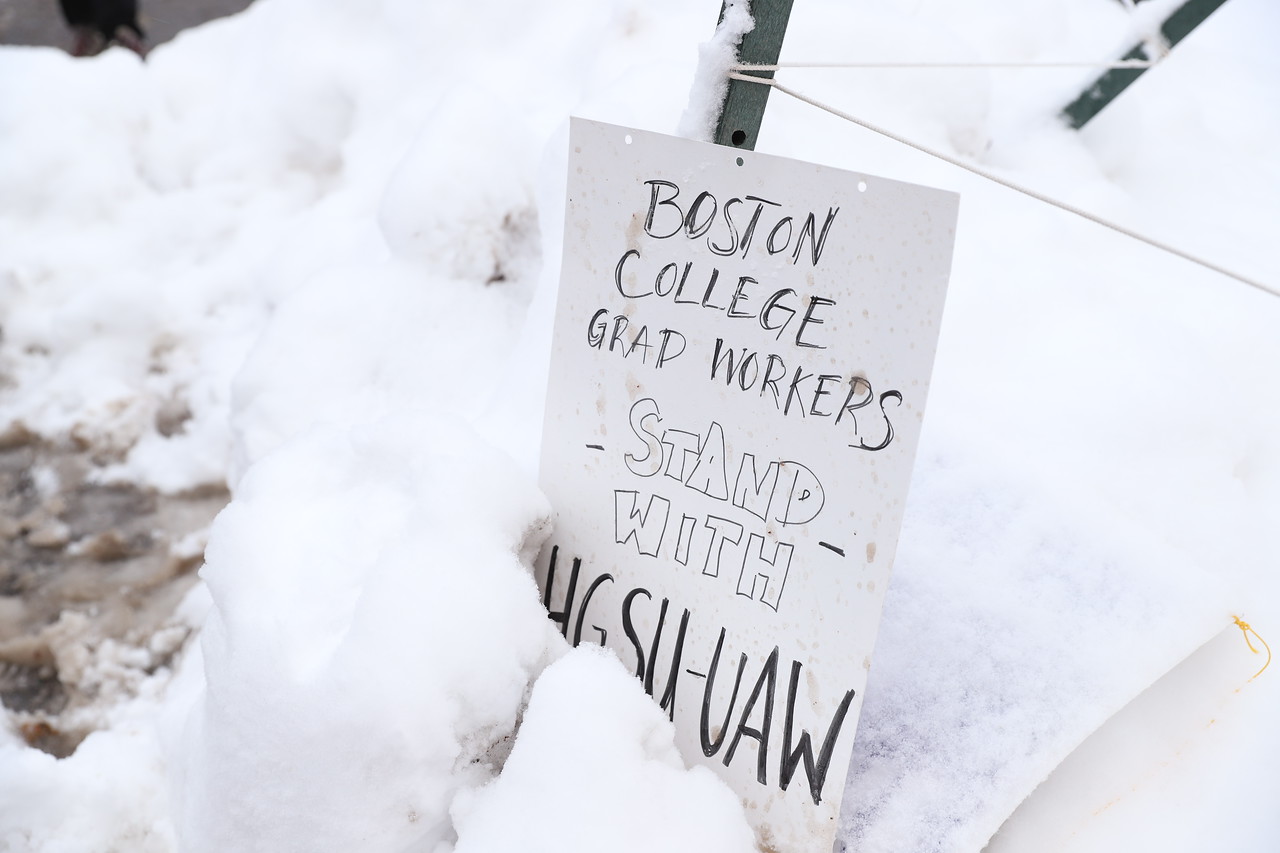 Members of academic unions worldwide have thrown their support behind Harvard Graduate Students Union-United Automobile Workers this week as they began their strike Tuesday.

At least 20 other student unions have written statements of support for HGSU-UAW on Twitter, and some individuals have taken other actions, like striking in solidarity, picketing at Harvard, and donating to a hardship fund for striking workers

HGSU-UAW went on strike Tuesday after more than a year of contract negotiations with the University. Over the course of 28 bargaining sessions, the union and the University have reached 12 tentative agreements. But the parties remain at odds over issues including health benefits, compensation, and grievance procedures for sexual harassment and discrimination complaints.

Numerous graduate student workers from local colleges and universities have spent time on the picket line during the first three days of the strike, holding colorful signs bearing slogans like “An Injury to One is an Injury to All! Solidarity from UMass Lowell” and “UMass Boston Stands with Harvard Workers.”

Boston University Ph.D. student Megan J. LeBarron spent time on the picket line on Tuesday with friends from Boston College and Northeastern University. She said she is currently planning a return trip.

“There’s something really wonderful and inspiring about hearing the beats and marching along, and that physical solidarity of being in the same place at the same time, dedicated to the same cause,” she said.

LeBarron added that her time on the picket line left her feeling empowered to support unionization efforts at Boston University. Though BU graduate students are not currently unionized, an organizing committee is working to gain recognition on their behalf, she said.

“There's something really powerful in seeing that you are not alone here,” she said. “You feel marginalized and so do all of these other people. And in that, there is some degree of strength.”

MIT Ph.D. student Crystal Lee said she spent time on the picket line Thursday. This semester, she served as a Teaching Assistant for the Harvard course HISTSCI 119VH: “Sugar, Spice, and Science: Colonialism and Commerce in the Making of a Global History of Science.”

Lee, who is not part of the union, emailed her students at Harvard on Tuesday to inform them that she planned to stop performing her Harvard teaching duties in solidarity with HGSU-UAW. In her email, which she later posted to Twitter, she said her decision was due to “the momentous nature of the discussions between the Union and the Harvard administration.”

Lee said she worried about being used to break the strike if she did not withhold her labor.

“I don’t really want to be a strike breaker because I think it is entirely conceivable for Harvard to look to outside labor, look at Tufts, MIT, BU, etc. to try to replace Harvard graduate student labor and I want no part in that,” she said. “To put it crassly, I don’t want to scab on my fellow graduate students at Harvard.”

MIT graduate student Ethan G. Baker also said he hopes to deter Boston-area students from doing work for Harvard. He wrote in an email that he is “trying to make sure coworkers understand to not unintentionally replace the labor of striking workers.”

Away from the picket line, many HGSU-UAW supporters outside of Boston have found ways to support the strike from afar.

Jeff R. Schuhrke — a Ph.D. candidate at the University of Illinois at Chicago and the former president of their Graduate Employees Organization — said the strike is important to his union, which held a strike for nearly three weeks this spring.

“It’s heartening to see other grad unions going on strike as we did,” he said. “We understand what’s at stake, and how difficult it is and how risky it is and how much work it takes to organize it from our own experience.”

He added that he is closely following disputes between HGSU-UAW and Harvard over grievance procedures for sexual misconduct.

“It’s becoming our main issue that we’ll be taking on going forward in our next contract campaign, so seeing what happens with HGSU and with their strike is really important to us and we hope that they get some kind of strong language in their contract about that,” he said.

Alex J. Miller — the communications chair for Academic Labor United, a group of graduate students at the University of Hawaii attempting to unionize — said that this strike is an important example for his organization.

“It’s important for our members to see what a strike looks like and what a strike on a university campus looks like,” Miller said. “It’s about showing them the numbers that we need.”

Robyn Orfitelli ’06, who currently works as an English lecturer at Sheffield University in the United Kingdom, has taken similar steps to “signal boost” the HGSU-UAW strike online. She said she has “donated to their fighting fund” and plans to write a letter to Harvard’s administration expressing support for the strike.

Orfitelli is a member of the UCU — the University and College Union — which represents academic workers at several universities across the U.K. Members of the UCU, representing more than 6o universities in the U.K. including Sheffield, held a strike from Nov. 25 to Dec. 4, overlapping with the strike at Harvard for two days.

“There’s a saying that goes, ‘the longer the picket line, the shorter the strike,’” Orfitelli said. “In today’s internet age, the picket line isn’t just the people who are physically on the picket line. It’s all of the people on the internet, who are expressing support or sharing information so that new people can learn about what’s going on, because a lot of industrial action is a battle of public opinion.”