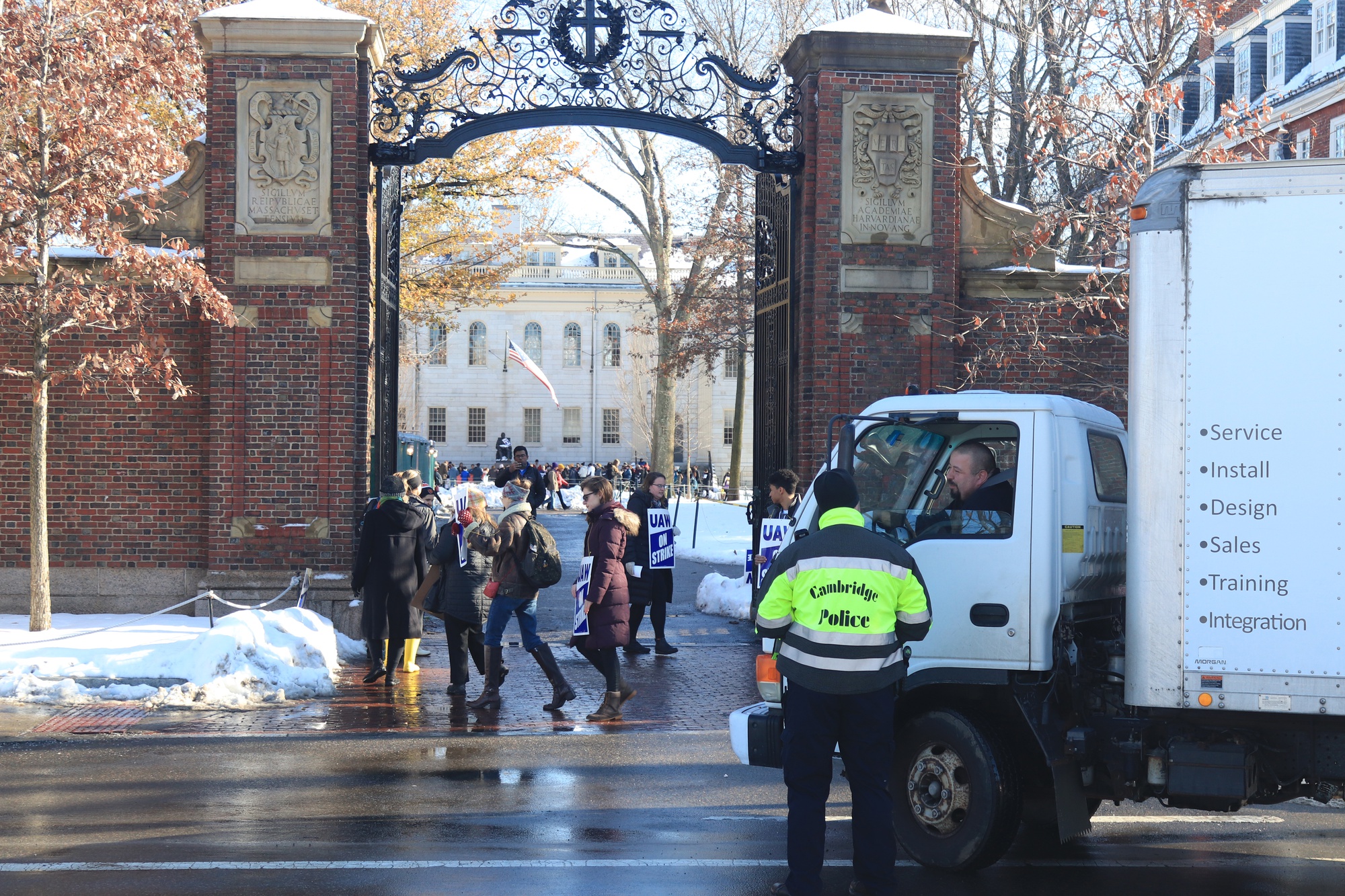 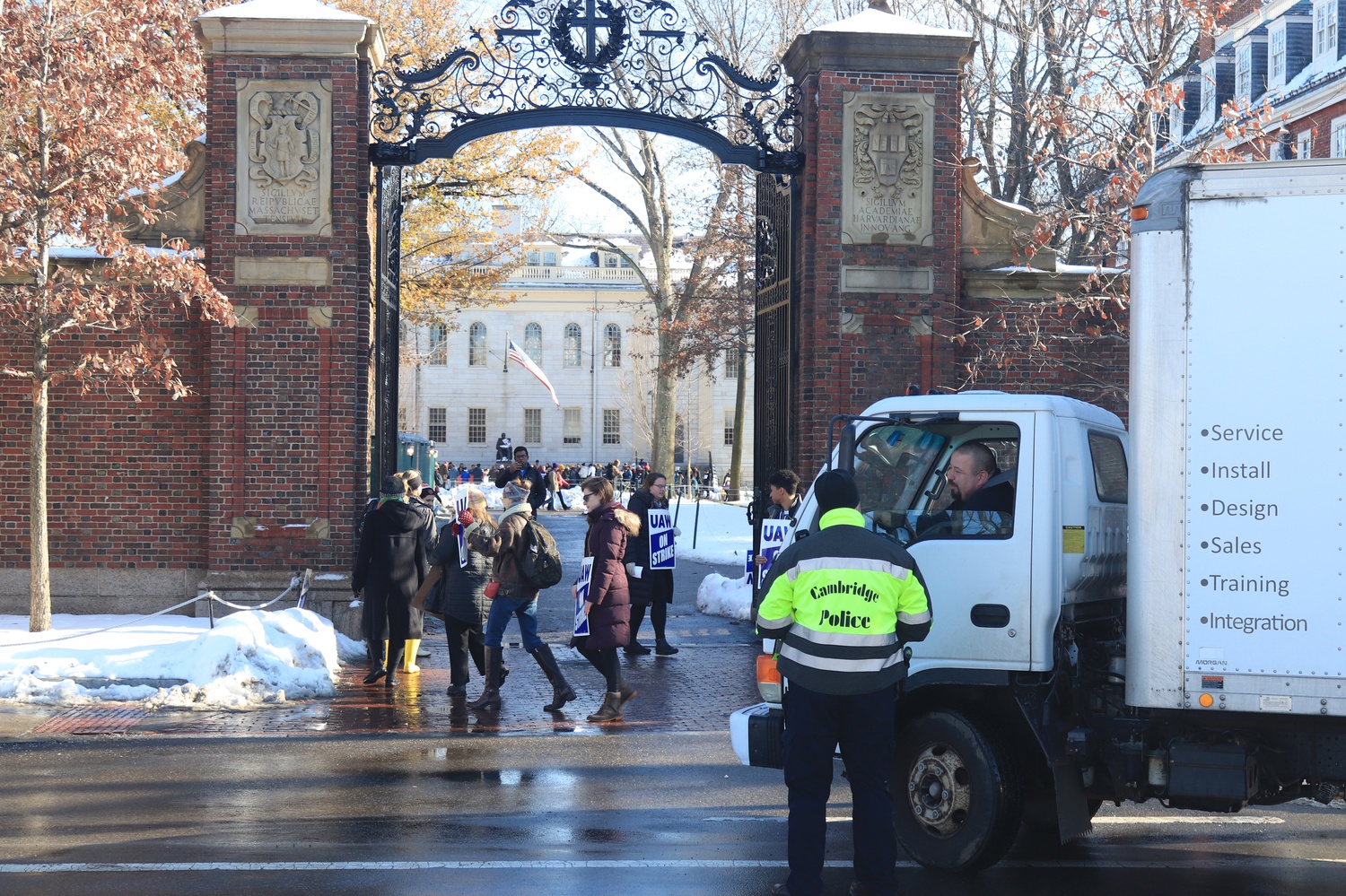 Mail and package deliveries across the University were disrupted Wednesday and Thursday by the graduate student union strike, which will enter its fourth day Friday.

United Parcel Service is not delivering to Harvard in support of picketers, according to several University communications. At other locations across the University Wednesday and Thursday, individual picketers attempted to block delivery entrances and asked drivers to withhold their deliveries.

Harvard Graduate Students Union-United Automobile Workers went on strike Tuesday after more than a year of contract negotiations with the University. While the parties have reached 12 tentative agreements in the 28 bargaining sessions held so far, differences remain on key issues such as compensation, health benefits, and grievance procedure for sexual harassment and discrimination complaints.

The decision by UPS not to deliver to Harvard has delayed packages addressed to the University’s Cambridge campus. Several undergraduate Houses experienced delays, according to email announcements from House administrators over email lists.

“[Harvard University Mail Services] is in the process of scanning in all of today’s UPS packages and expects to deliver those packages to the Houses tomorrow, 12/6,” the announcement read. “HUMS is not planning to keep delivering UPS’s packages should UPS continue to withhold delivery tomorrow onward.”

The strike also disrupted BorrowDirect — a service that enables library borrowing across academic institutions in the United States — according to an email publicized by HGSU on Twitter. Some BorrowDirect deliveries rely on UPS.

Harvard Library is now looking at alternative methods to address delivery delays for borrower services and other deliveries as part of the ongoing University-wide contingency plan should the strike continue, according to University spokesperson Jonathan L. Swain.

In the meantime, Library patrons were cautioned to “expect fairly long turnaround times for loans.”

Ann-Catherine I. McNeill, a Ph.D. student in the Study of Religion who lives in a freshman dorm in Harvard Yard because her partner is a freshman proctor, did not receive an expected delivery from UPS Wednesday.

“I didn't get my UPS delivery today but that was totally worth it,” McNeill wrote in an email, noting that she supports the strike “wholeheartedly.”

“I would much rather get fair working conditions, harassment protections, and adequate healthcare coverage than a timely delivery of my online shopping (preferably both but if one has to choose) and I am grateful for UPS Teamsters supporting us,” she added. “Let's hope I get a fair contract and my mail sooner rather than later.”

“We're out in this particular spot because we're trying to talk to people that make deliveries to Harvard to get them to not make deliveries in solidarity with the Union,” said Physics Ph.D. student Lev H. Kendrick, who was stopping deliveries outside of Quincy House Wednesday morning.

History of Science Ph.D. student Alexis Turner, another picketer stopping deliveries outside of Quincy House, said the group stopped one of the three deliveries made in the morning.

“A second gentleman informed us that if we got in touch with his union management, next week at this time he won’t deliver,” she said.

Sean M. O’Brien, the president of the International Brotherhood of Teamsters Local 25 — a union representing roughly 12,500 people including delivery workers in the Boston area — wrote that its members “always” honor picket lines.

“Solidarity is key to getting a fair wage with proper rights and protections, and we are proud to support our union brothers and sisters. These student workers have already learned that only by standing together can working people hold greedy employers accountable,” O’Brien wrote.

A previous version of this article incorrectly stated that Alexis Turner is a Physics Ph.D. student. In fact, she is a Ph.D. student in History of Science