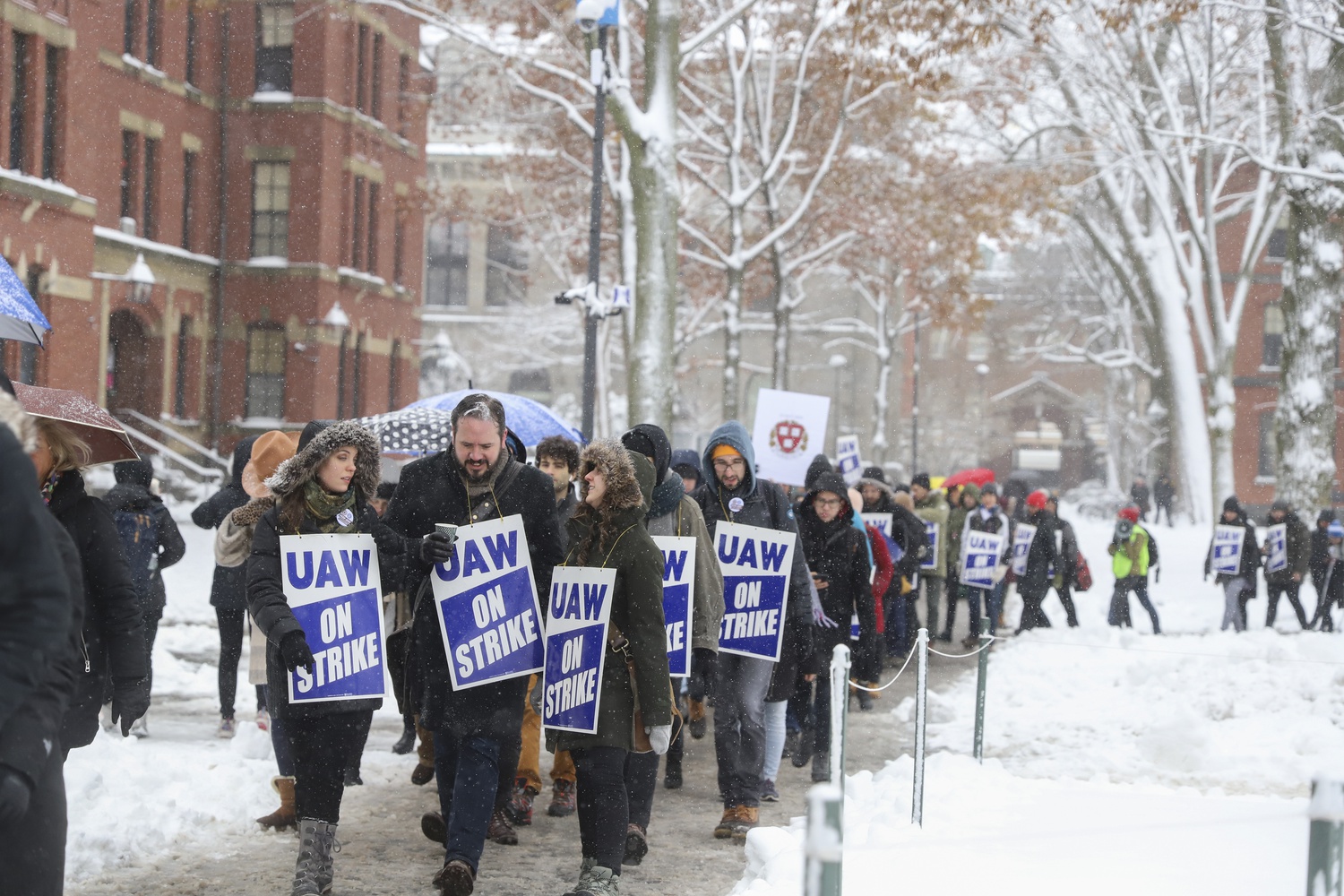 Graduate students brave the snowfall and freezing temperatures as they march through the Yard on Tuesday morning. The first day of the strike began with a walkout at 10:30 a.m., and the protestors numbered in the hundreds at their peak. By Kathryn S. Kuhar
By Ellen M. Burstein and Ruoqi Zhang, Crimson Staff Writers

Department administrators and course heads have had to reduce review sessions and relocate classes as hundreds of graduate student union members gave up their teaching duties to join the strike.

The strike comes as FAS enters reading period, a week set aside for students to write papers and study for final exams, which begin Dec. 10.

HGSU has not announced an end date for the strike. The union and Harvard have been negotiating for more than a year and produced 12 tentative agreements over the course of 28 bargaining sessions. The parties, however, remain at an impasse over key provisions on compensation, health benefits, and grievance procedure for sexual harassment and discrimination complaints.

HGSU’s strike can potentially impact grading of final exams if it becomes extended. The longest strike by a graduate student union in the past seven years was held by graduate workers at University of Illinois Urbana-Champaign and lasted for 11 days.

HGSU has instructed its striking members to turn over all their work materials to supervisors prior to the strike, according to the union’s strike guidelines. The union also recommended striking members notify faculty members and students that they will be withholding their labor for the duration of the strike and provided an example letter for doing so.

“I am disappointed that it has come to this: students workers, including myself, work hard for this university to ensure you get the best education possible, but Harvard refuses to agree to protections and provisions that other student workers at other universities enjoy and that enable them to do their best work,” the example letter read.

Graduate teaching fellows in at least nine classes — together affecting hundreds of students — announced to students in emails that they will halt all their teaching responsibilities for the duration of the strike, according to emails obtained by The Crimson.

All teaching fellows for Tech Ethics, a course with 620 students, will stop holding review sessions and office hours, according to an email obtained by The Crimson.

Professors teaching Ec10A, a popular introduction to economics course with 612 enrollees, plan to hold extra review sessions and office hours, in addition to the ones scheduled by the course’s non-striking teaching staff, according to a course announcement.

Some instructors said they changed the location of their classes Tuesday because of the strike.

Yiddish preceptor Sara Feldman said that she relocated her classes, as she was uncertain whether protesters would establish a picket line that she and her students did not want to cross.

Feldman added that students in her class had elected to incorporate the strike into a research project.

“They researched the cultural history of labor and use some of the material that we have learned in class, like how to create the command form of a verb, in order to write in Yiddish some slogans... about what's going on with the Harvard Graduate Student Union,” Feldman said.

Committees including Social Studies and History and Literature also relocated some academic meetings — like classes and advising sessions — off-campus or to undergraduate residential houses to prevent faculty and staff from having to cross the picket line.

“There may be picket lines around William James Hall and other Harvard classroom buildings, and we understand that many of our faculty, students, and staff will not want to cross those picket lines.” wrote Anya B. Bassett, director of the committee on degrees in Social Studies, in an email to concentrators.

The picket line is porous so as to allow student workers to fulfill their academic duties, according to the union’s strike guidelines.