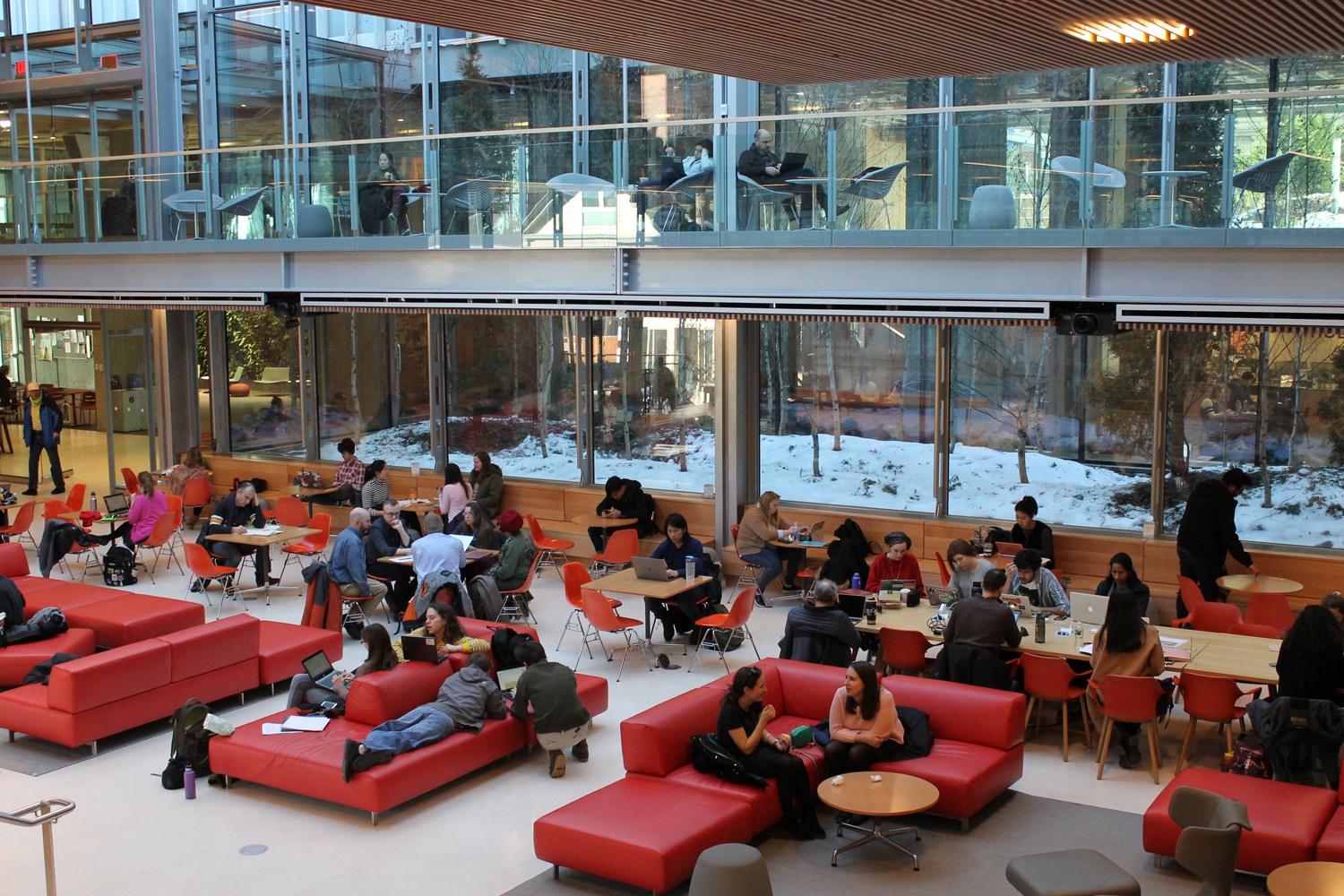 The Smith Campus Center has policies that prohibit individuals from sleeping in its common spaces. By Chloe I. Yu
By Ema R. Schumer, Crimson Staff Writer

While the Smith Campus Center has given many a new place to seek refuge from the Cambridge winter, repeated instances of homeless individuals violating the building’s no sleeping policy has prompted security guards to call Harvard police multiple times.

Harvard University Police Department officers have been dispatched to the building almost daily in recent months, often to address reports of an “unwanted guest in the area,” according to the department’s daily crime log. Sleeping in all areas of the building is prohibited, and security guards will check anyone who appears to be asleep or unconscious, according to the Building User Guide.

HUPD Spokesperson Steven G. Catalano wrote in an emailed statement that police have intervened only in instances with non-Harvard affiliates violating campus policies and Cambridge law.

“All of the persons we have dealt with for both disorder issues and criminal behavior have been non-affiliates,” he wrote. “The majority of the behavior has been sleeping, but we have responded to disorderly behavior as well as threats and assaults and batteries.”

After two years of construction, the Smith Campus Center reopened at the start of last semester to both Harvard affiliates and the general public. The building has “Common Spaces” open to everyone, including a first floor pavilion and other attached locations, along with areas accessible only to Harvard ID holders.

“Harvard is proud to maintain an open campus,” she wrote. “The University welcomes thousands of visitors from both near and far to all areas of our campus daily. We are fortunate to be located in a vibrant, densely populated urban area, and are happy to share our campus with our neighbors.”

Though the policy states building staff are responsible for enforcement, Catalano said that HUPD has assigned officers to patrol the common spaces during operating hours.

“In the event that misconduct, including sleeping in the Common Spaces, or criminal activity is reported to the HUPD, officers will respond to the location and take appropriate action,” he said.

Many people who frequent the Smith Center say that they have seen individuals who they identified as homeless sleeping in the building.

Cambridge resident Sheila T. Dillon, who often plays chess on the ground floor of the building, recalled witnessing a security guard checking on a homeless man who appeared to be asleep in December.

“Someone I know is a chess player and homeless and he was dozing off and the security guy respectfully said ‘are you ok?’” Dillion said.

She said he woke up and remained in his seat awake.

“I’ve seen people who are visibly homeless sleeping and security guards aren’t too happy about it,” he said. “They gently nudge them and say they’re not allowed to sleep here.”

Sleeping itself is not grounds for removal from the building. Catalano wrote that removing people from the building or issuing no-trespass orders depends on how people react to being asked to wake up.

Harvard students, too, fall asleep in common spaces, according to frequent visitors of the Smith Center.

Ariel G. Silverman ’22 said that she has seen students sleeping on a couple occasions without intervention from security guards.

“I didn’t see a security guard wake them up but I wasn’t around for awhile, so it’s possible,” she said.

Suyeon Lee ’22 also said that she often sees her classmates sleeping at the Smith Center without disturbance.

“I come to Smith almost every day and every time I see them,” she said. “Maybe they’re not asleep but just like closing their eyes, you know.”

She said that she has never seen a security guard wake up students.

Others, however, have observed security guards waking napping Harvard students.

Harvard Extension School student Larry A. Gil said that he typically comes to the Smith Center a couple times each week. He said that each time he’s there, he sees “young people,” whom he infers are Harvard students, sleeping on a couch in the common space too.

“Security comes and wakes them up,” he said.

Catalano underscored HUPD’s commitment to enforcing the rules without prejudice.

“Although some of the complaints have been associated with persons who self-identify as homeless, the Department is concerned about inappropriate or illegal behavior committed on campus regardless of the status or affiliation of person(s) involved,” he wrote.