Preview: No. 14 Men's Hockey to Face Dartmouth in ECAC Quarterfinals

Harvard starts the road to Lake Placid with a best-of-three quarterfinal beginning on Friday.
By Stuti R. Telidevara 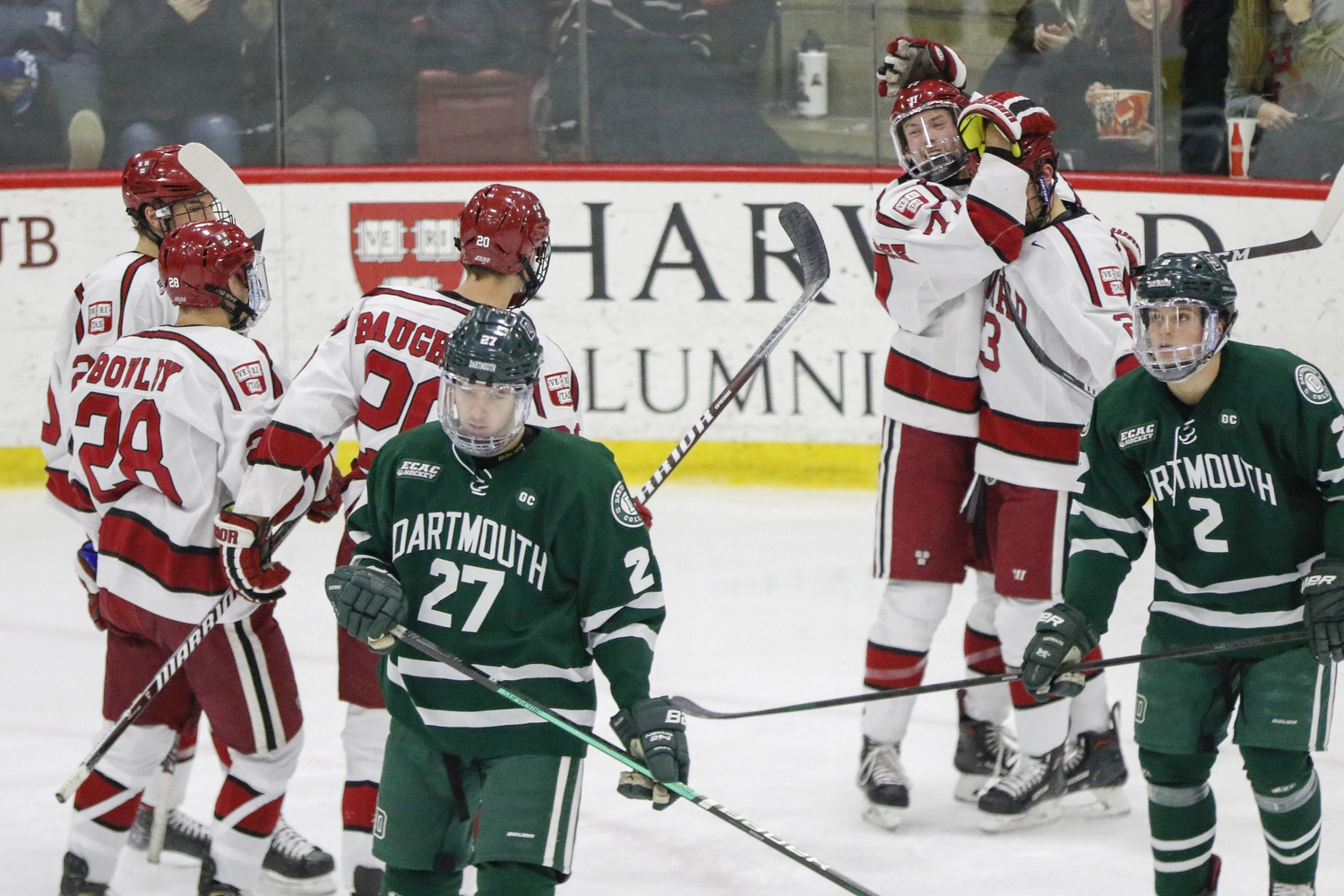 Last year, the Crimson beat the Big Green in a three-game series to advance to Lake Placid. By Timothy R. O'Meara

Just like last year, the Big Green is coming off a 2-1 series win against St. Lawrence, and is the five-seed to the Crimson’s four. Unlike last season, however, Harvard is ranked. Any school can enter the NCAA tournament by winning its conference tournament, but a high enough PairWise ranking — the Crimson sits at no. 14 on that scale as well — can ensure an at-large bid. Harvard can avoid having to run the gauntlet at Lake Placid and still play the NCAA regionals.

But before the team can think that far ahead, it must have a strong enough showing against Dartmouth to boost said ranking. That means righting last season’s errors — in 2018, the Crimson dropped Game 1 versus the Big Green before coming back to win the series.

“Our focus is on Dartmouth this weekend,” said Harvard head coach Ted Donato ’91. “We recognize it as a real benchmark to be able to make it to Lake Placid…. [But] right now, it would be very dangerous for us to look by a very good Dartmouth team who I think has the same thoughts in mind, of getting to Lake Placid…. Both teams have the right to feel confident coming into the series.”

The Crimson secured a top-four seed and a weeklong bye in the last weekend of regular season play when it defeated RPI on March 1. The Whitelaw Cup, awarded to the ECAC regular season champion, was within the team’s reach until a loss at Union the very next day. Harvard will be looking to prove itself after that stumble and return to winning ways — until the defeat, the Crimson was 6-1 in conference play since the start of February.

“It was definitely a tough bus ride home from Union, knowing that we could’ve shared a title at least,” co-captain Michael Floodstrand said. “It stings a little bit, but honestly, I think you use that sting to motivate you. There’s no easy games in this league, and that wasn’t even the playoffs.”

Dartmouth comes into Cambridge on the heels of a 8-0 demolition of the Saints in Sunday’s deciding game. Though the series had seemed even, with the Big Green taking the first game 3-2 but dropping the second in overtime, the offensive showing proved Dartmouth can step up its game when the occasion calls. 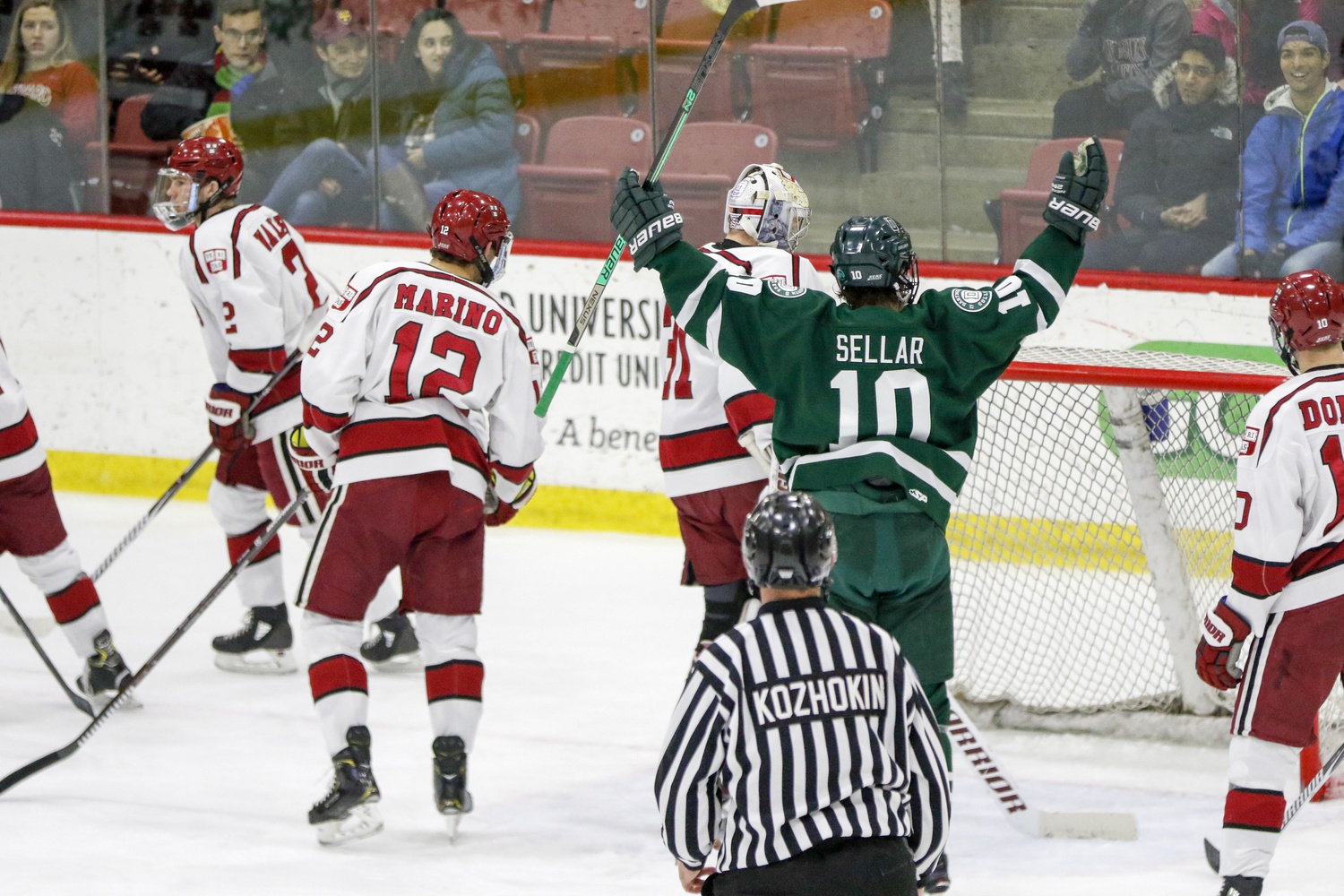 In both regular season contests between these teams, Dartmouth has found the net first. Harvard will want to stifle the Big Green's run-and-gun offense, or risk a repeat of last year's Game 1 loss. By Timothy R. O'Meara

Harvard has learned this the hard way — the Crimson’s season-opening loss was a 7-6 OT barnburner in Hanover. Not only is the Big Green riding that triumph, it also benefits from a weekend of play when Harvard did not see action.

“We’ve been just trying to focus on keeping the high pace [in practice],” Floodstrand said. “You got a team like Dartmouth coming in next weekend...who just played three very competitive games, had their season on the line, and won. We were just trying to up the intensity as much as we could, make it game-like.”

The Big Green’s biggest weakness appears to be special teams — its power play is at 15.5 percent and its penalty kill is at 79.5 percent, and those numbers are even lower within conference play. Even though Harvard’s own PK is less than optimal (76.8%), its efficient man-advantage unit will look to break down Dartmouth’s system. Still, the Big Green went 3-for-4 on the power play in Sunday’s contest against SLU, so its performance can exceed expectations in that respect on any given night.

“We’ve played them before, we know what kind of team they are,” rookie forward Casey Dornbach said. “It’s obviously going to be a jump up in intensity, being [the] playoffs…. For any team we play in the playoffs it’s do or die, and we’ve got to come ready to play and play our game.”

Harvard rode a wave of success to start the new year, entering the national rankings in February for the first time since early in the 2017-2018 season. In no small part is that success due to a freshman class that has hit its stride. The Crimson’s power play (29.4%) is a heartbeat behind UMass’s nation-best squad and features several rookies on its top unit, including forwards Jack Drury and Casey Dornbach. Blue-liner Jack Rathbone plays on the second unit. 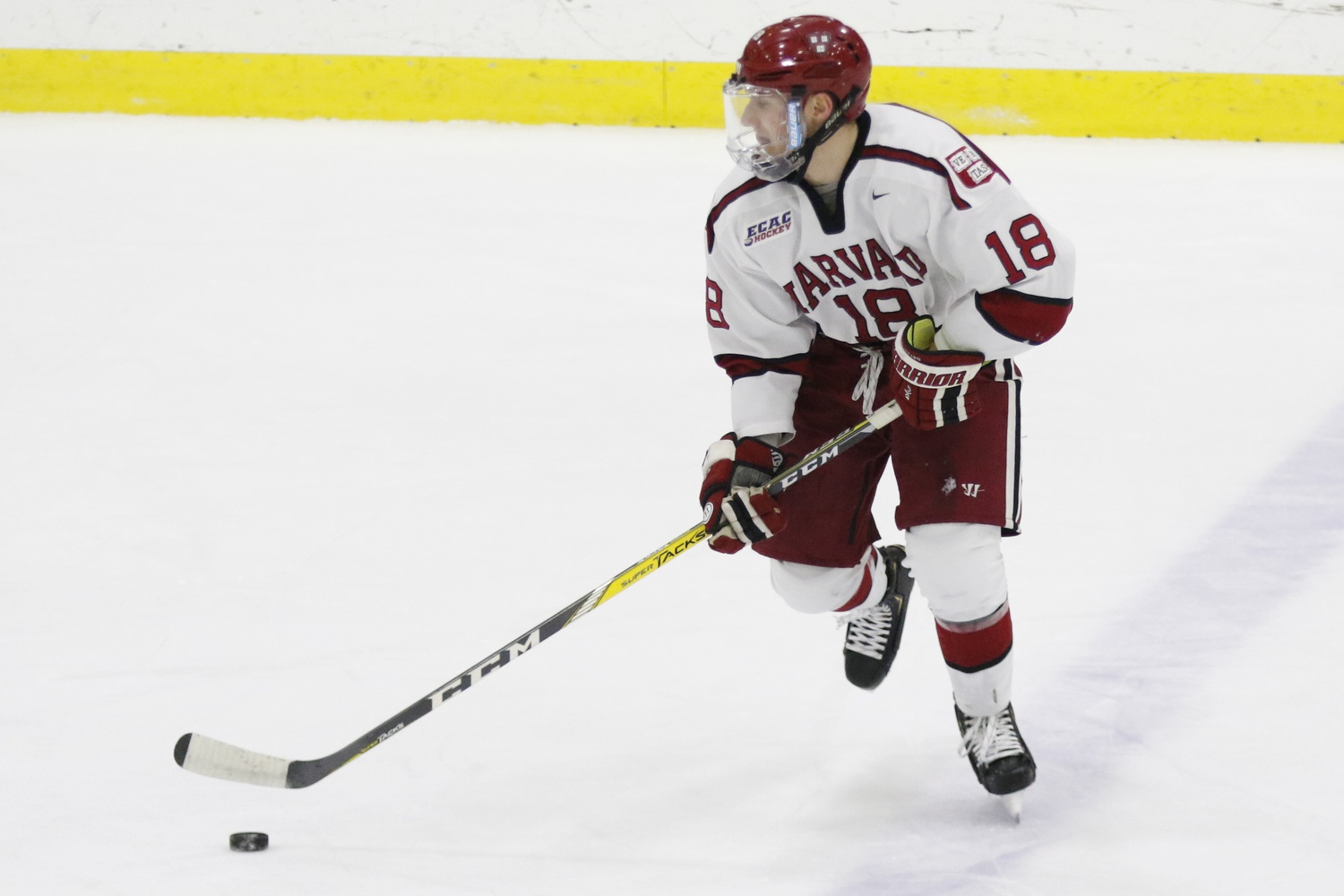 Dornbach in particular has found his groove on the man-advantage; he leads all freshmen in assists per game (0.79) and is tied for most points per game (0.97). The Edina, Minn., native recently took home Ivy League Rookie of the Year honors, and has the most points (7–21—28) by a Harvard freshman since Tim Pettit ’04. He and his classmates will need to adjust for the intensity of the playoffs come Friday, but having played at Madison Square Garden and the Beanpot, the rookies do have some big-game experience.

“I know we haven’t been here before, playoffs in college,” Dornbach said. “But just taking it one game at a time, focusing on our system — I think everyone knows what’s on the line, so that kind of speaks for itself. We’ll just have to bring it even more.”

Of course, experienced upperclassmen also play pivotal roles on the team, few more so than junior defenseman Adam Fox (29 GP, 8–32—40). The Ivy League Player of the Year leads the country in assists per game (1.10), and all defenders in assists and points per game (1.38). His point total is tied with a personal best from his freshman year, which he achieved in 35 games. Fox’s playmaking abilities will certainly be key to the Crimson’s success, both on the power play and at even strength.

Meanwhile, co-captain Lewis Zerter-Gossage (17–6—23) and sophomore defenseman Reilly Walsh (11–18—29), who pace the team in goal-scoring and power play goal-scoring respectively, are the ones to watch when Harvard attempts to put home its opportunities.

On the back end, however, the Crimson has less certainty. Senior net-minder Michael Lackey (14-6-3, 2.23 GAA, .920 SV%) settled into his crease as the season progressed and looked to be the team’s go-to goalie, but an injury in last month’s clash against Clarkson has kept him out of play since. Junior Cameron Gornet has risen to the task in his absence (3-1-0, 1.76 GAA, .941 SV%), but the postseason provides a challenge for any backstop. Gornet has not faced Clark or Dartmouth at all in his career, nor has he started a playoff contest. 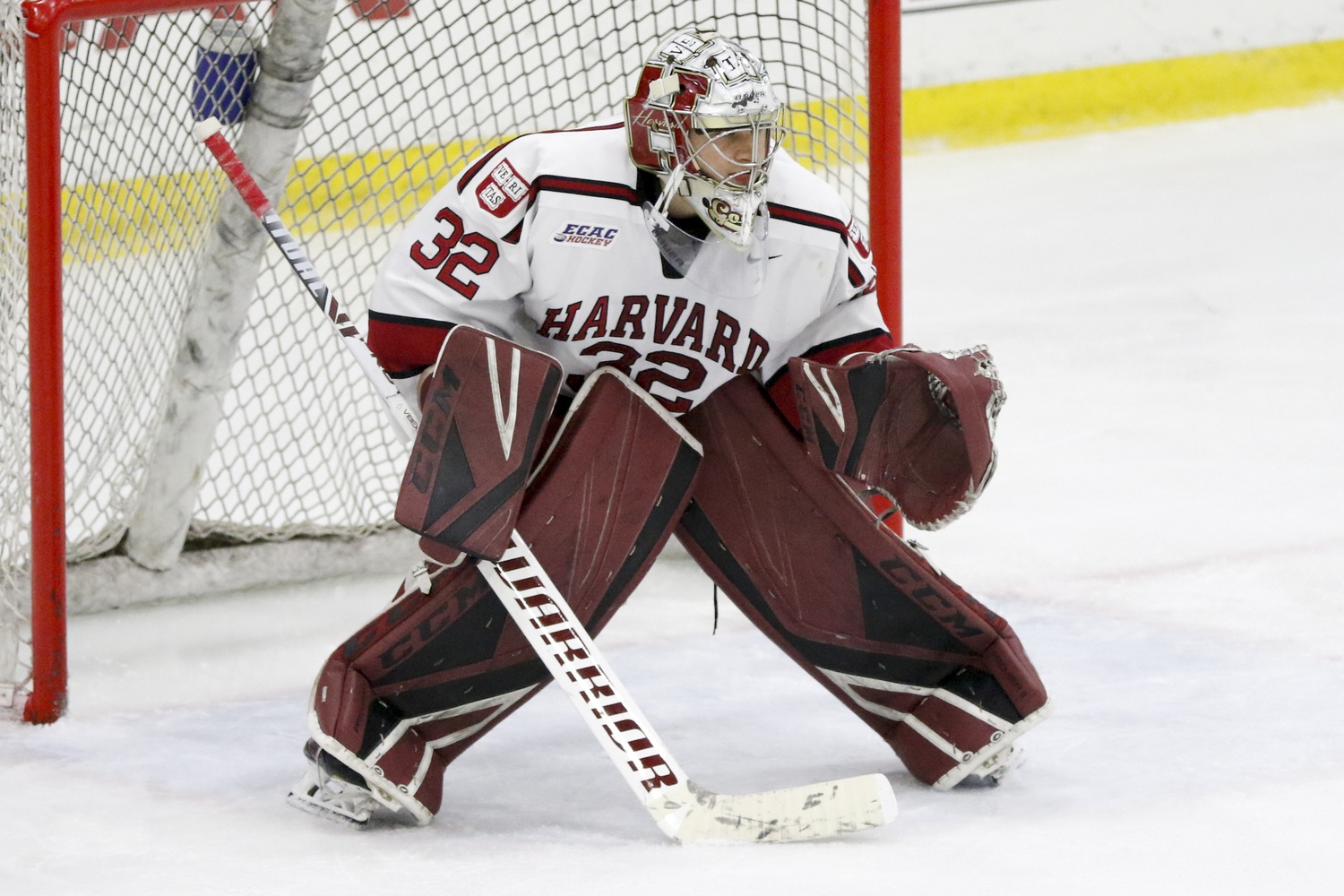 Junior Cameron Gornet is riding a streak of solid play and is set to make his postseason debut on Friday. By Timothy R. O'Meara

“[Lackey] seems to have made some progress, which is great,” coach Donato said. “But we would expect that we’ll see [Gornet], at least for Game 1 anyways.”

Both teams have their strengths and flaws, and while the Big Green comes into this series as the underdog it has shown that it can overpower Harvard. The question is whether the new and improved Crimson, which handily overcame a deficit to defeat Dartmouth last month, can finish the task it could not in the beginning of the season. A series loss does not necessarily mean the end of the season for Harvard, but if the team wants to control its fate it will need to make a statement this weekend.