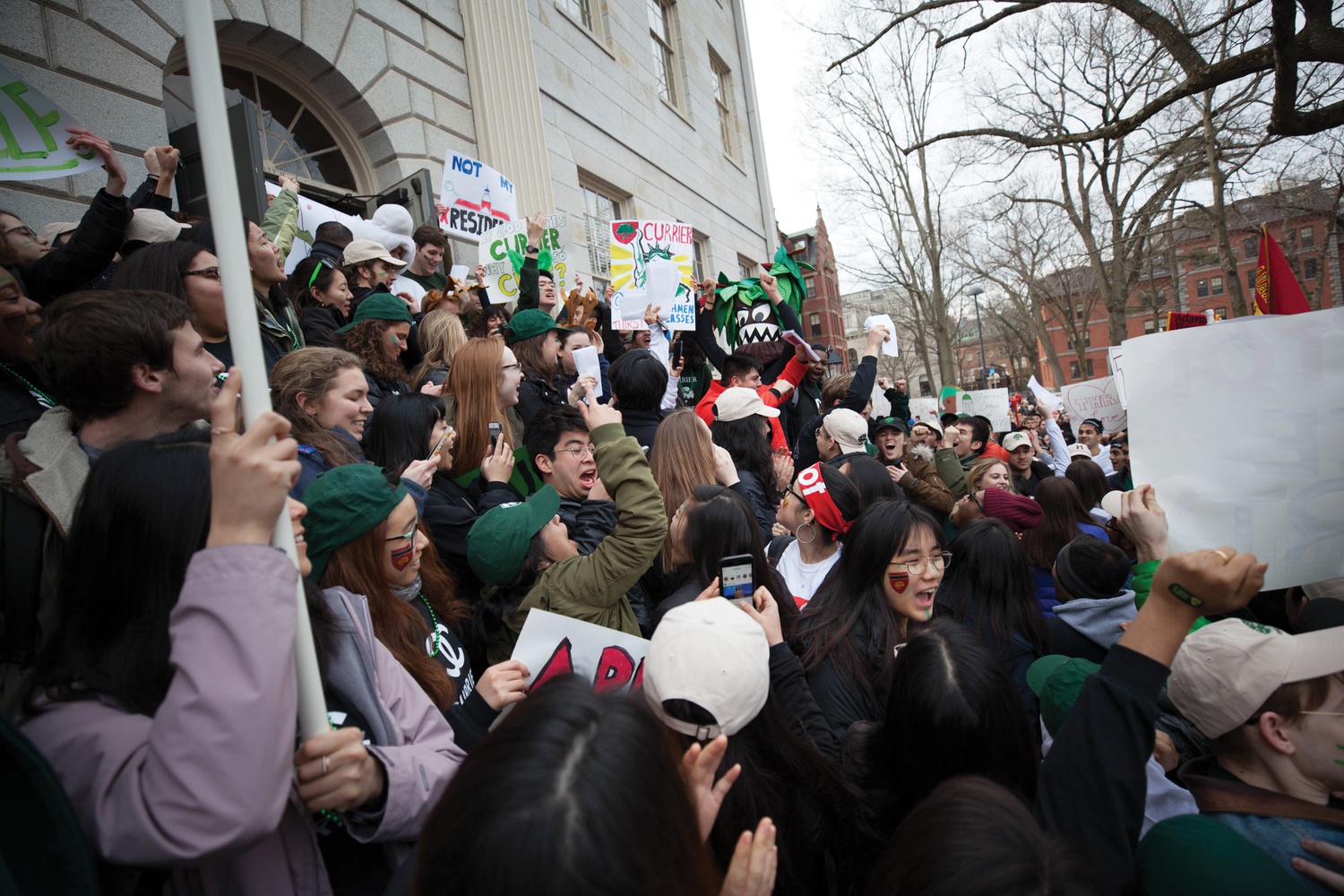 Harvard’s annual Housing Day informs freshmen living in the Yard of their placement into one of Harvard’s 12 residential houses for upperclassmen for the coming three years.

Many of the upperclassmen “dorm-stormers” awoke early to get breakfast with their Houses, dress in House gear, and blast music before making their way to the Yard. With the crash of a gong at 8:30 a.m., House Committee chairs emerged from University Hall with letters informing freshmen of their new Houses. Then, excited groups of students charged into freshman dorm rooms to deliver the news.

As freshmen poured out of their dorms to share their House placement with friends, their reactions ranged from ecstatic to relieved to devastated.

Blockmates Alex P. Grayson ’22 and Melody M. Wang ’22 said they were thrilled to be assigned to live in Lowell House next year.

“We were in disbelief,” Wang said. “It was like a dream, honestly.”

Wang attributed her enthusiasm to Lowell’s soon-to-be-completed renovation, its high percentage of singles, and its convenient location in Harvard Square.

Mckayley S. Green ’22, who was places in Dunster House for next year, said she was worried about being assigned to one of the three Houses in Radcliffe Quadrangle, which some freshman fear for their distance from the Yard.

“The people that came to the room were chanting ‘Currier’ as they came up the stairs, so we were all a little bit freaked out. But when they came in, we found out they were all Dunster, and we were really relieved,” she said. 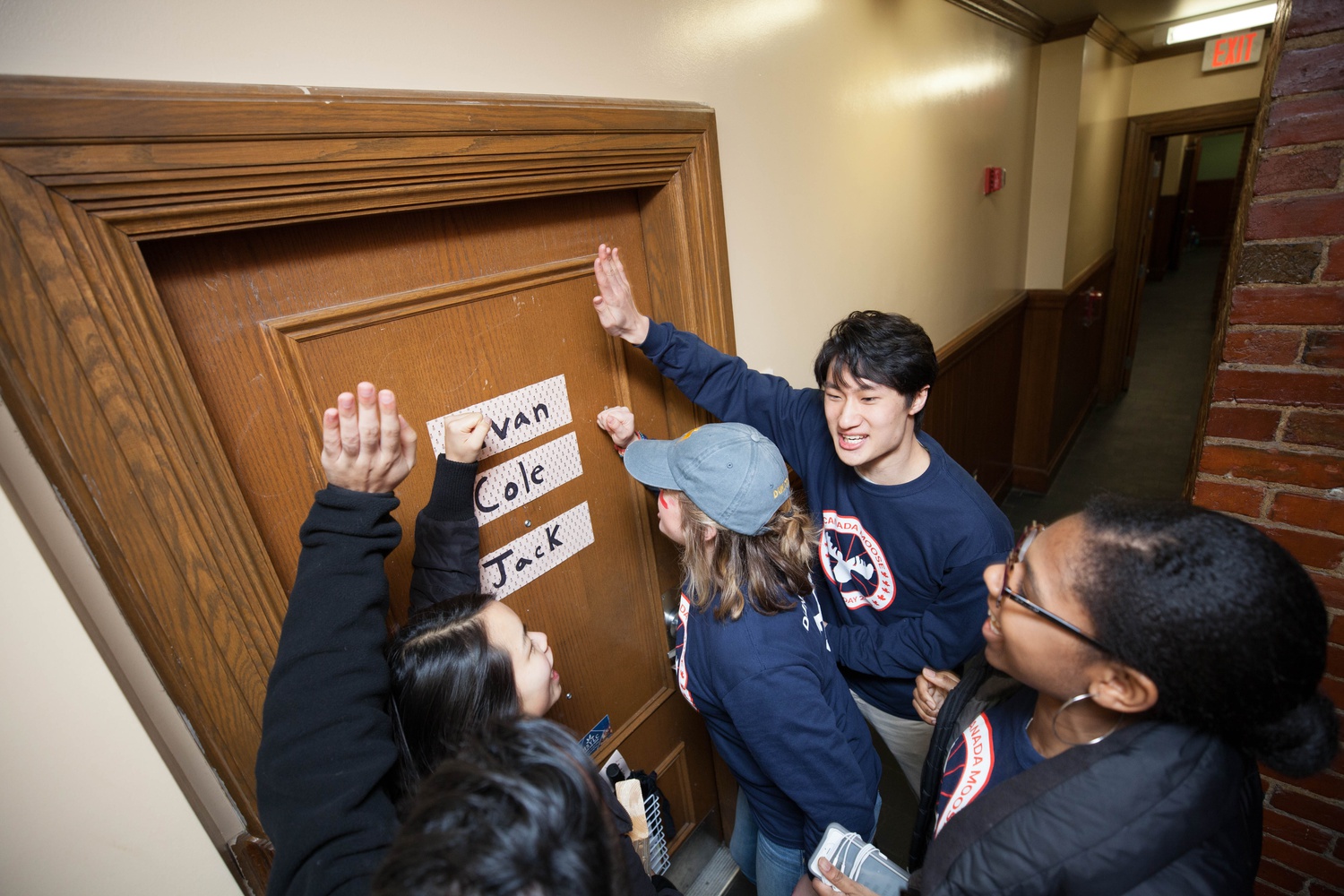 Though some students said they were hoping not to be placed in a Quad House, Currier HoCo co-chair Austin J. Lentsch ’20 said he thinks the Quad’s sense of community speaks for itself.

“Even when someone has a midterm later that morning, when they still want to wake up at 6 a.m. to go out and dorm storm," he said. "That’s how you know you have a community that you’re excited to welcome people into."

Madison L. Fabber ’22, a freshman who was placed into Pforzheimer House in the Quad, said that she had been hoping to be placed in one of the Houses there.

“I was like, 'maybe if the guinea pigs like me, they’ll put in a good word?'” Fabber said, describing how she and an upperclassman friend had played with Pforzheimer House's guinea pigs before Housing Day.

House Committee co-chairs from a number of Houses praised the turnout and energy of upperclassmen and freshmen alike.

All 12 Houses hosted events Thursday evening for freshmen to get to know their new Houses and meet current students, tutors, and faculty deans. Leverett House organized a carnival-themed event, complete with cotton candy and an obstacle course, and Lowell threw a party and dinner in addition to weekly Thursday evening tea, according to Leverett HoCo co-chair Rick Li ’21 and Lowell HoCo co-chair Jungyeon Park ’20, respectively.

“Sometimes people have their initial knee-jerk reactions and automatically expect a certain thing, but in general that all goes away by the evening, and everyone comes out to the House,” Lentsch said.

Park said Lowell House administrators were enthusiastically involved in Housing Day festivities. Economics Professor David I. Laibson ’88, who will begin his tenure as one of the Lowell faculty deans next academic year, participated in dorm-storming along with students, Park said. Park also said she was surprised to see Lowell Resident Dean Caitlin M. Casey, who is currently on maternity leave, back on campus welcoming new Lowell students.

“Our resident dean gave birth to her daughter on Saturday, like, literally 4 days ago,” Park said. “And Caitlyn shows up with her 4-day-old daughter in Annenberg. It was the most precious thing.”