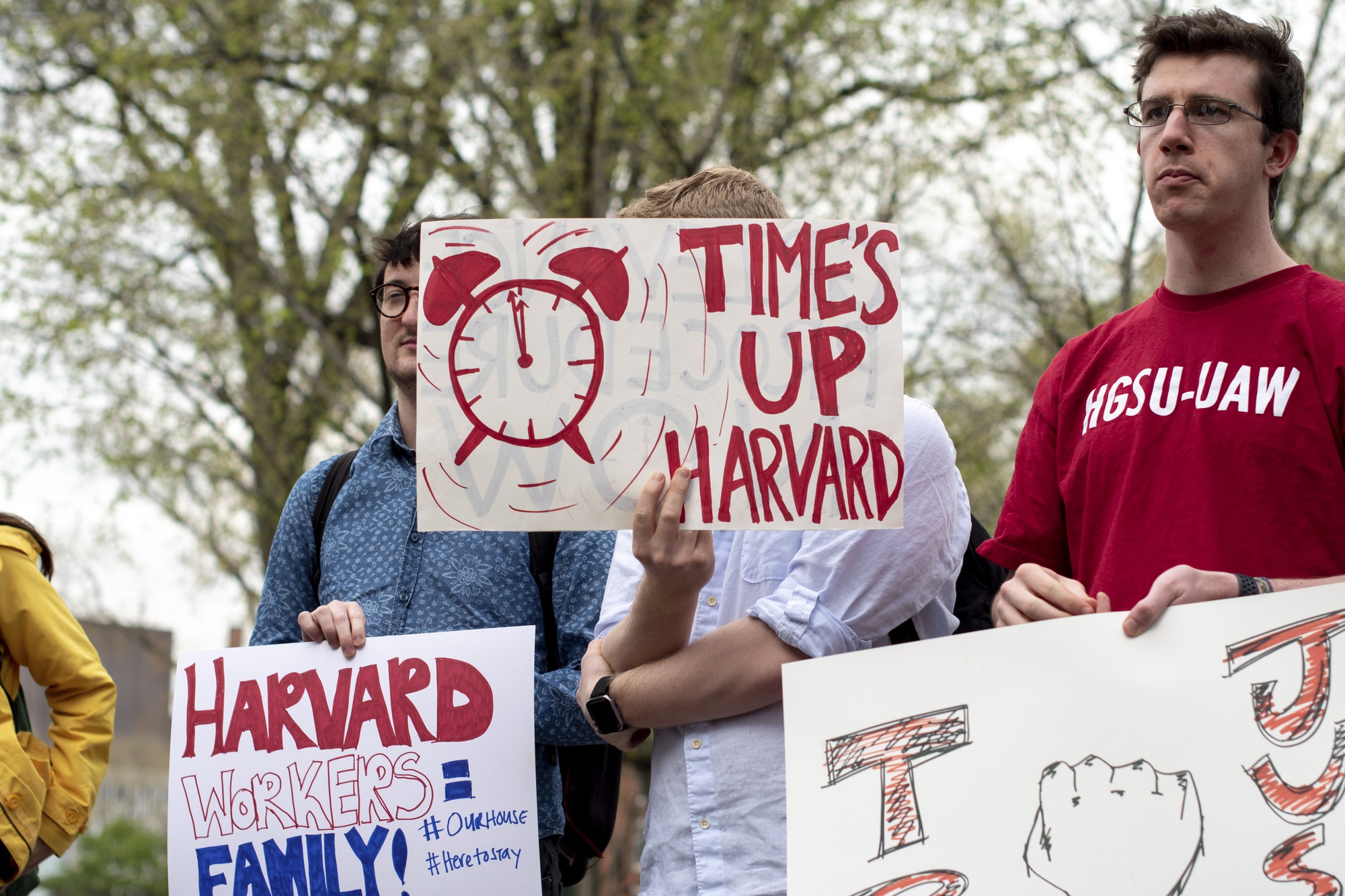 Protestors at the TPS Rally presented a petition, signed by over 200 individuals, asking President Bacow to defend the rights of those under Temporary Protected Status.
By Camille G. Caldera, Crimson Staff Writer 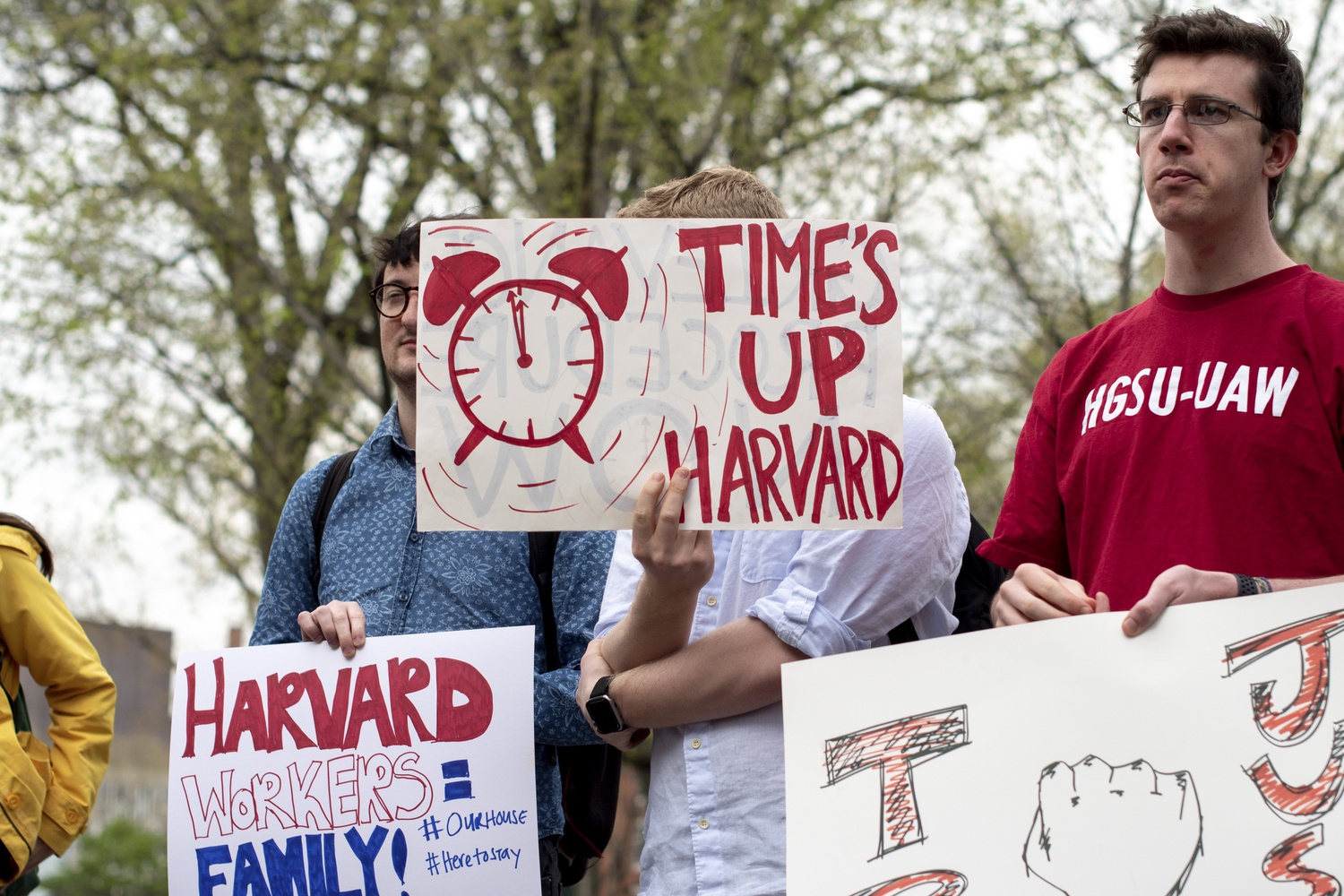 Protestors at the TPS Rally presented a petition, signed by over 200 individuals, asking President Bacow to defend the rights of those under Temporary Protected Status. By Quinn G. Perini

More than 50 people wielding signs including “TPS Workers Make Harvard Possible” and “Inaction=Oppression” crowded outside Massachusetts Hall on Wednesday, calling for the University to support workers with Temporary Protected Status and Deferred Action for Childhood Arrivals.

Harvard Students 4 TPS, a student organization formed this semester, called on University President Lawrence S. Bacow to meet the demands of Comité TPS, a local advocacy group. Demonstrators delivered a petition with nearly 600 signatures to President Bacow’s office, though he was not there to receive it in person.

TPS is a U.S. Department of Homeland Security designation for foreign nationals from 10 select countries who are unable to return due to safety concerns such as armed conflict or natural disasters. DACA is an Obama-era initiative that allows undocumented youth to legally live and work in the U.S.

“President Bacow needs to support the Massachusetts government, specifically the governor, to advocate for extensions of drivers’ licenses for TPS recipients so they don’t lose this vital form of their livelihoods,” Emily E. Ager, a Harvard School of Public Health student and a founding member of Harvard Students 4 TPS, said.

The group also pushed for Bacow to pursue more national advocacy, including partnerships with other college and university presidents and placing calls to a number of senators in support of a path to permanent residency for TPS holders. In a February trip to Washington D.C. Bacow met with senators about TPS and DACA, and sent letters to two senators in March advocating for recipients of both programs. 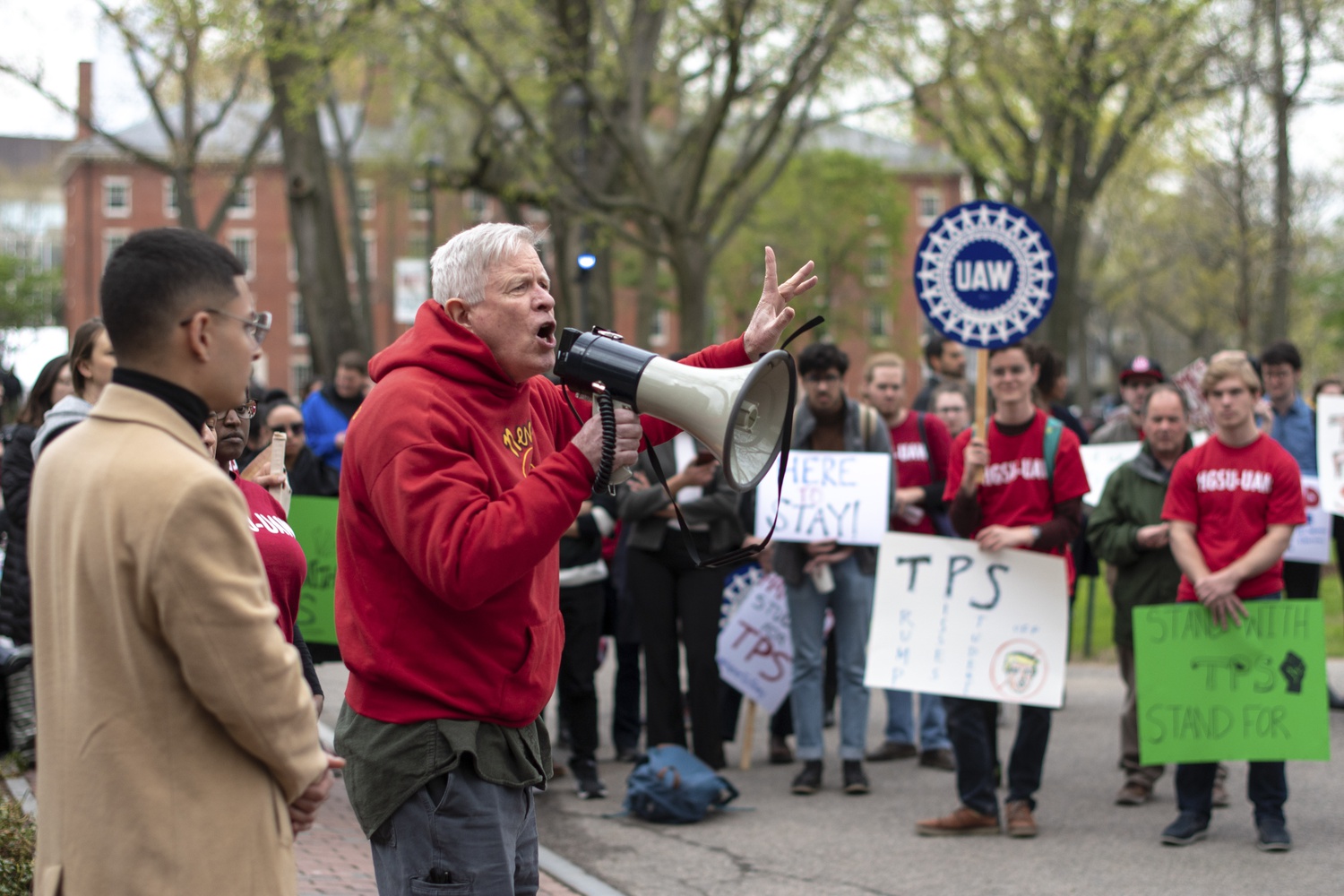 Harvard students supported protestors at the TPS Rally outside of Massachusetts Hall with signs demanding Harvard to take action. By Quinn G. Perini

The majority of Wednesday’s crowd spilled over from the Harvard University Graduate Student Union-United Automobile Workers demonstration in nearby University Hall. Demonstrators walked from one side of the Yard to the other, chanting, “Up, up, with liberation, down, down, with exploitation.” When they arrived at Massachusetts Hall, the crowd transitioned to shouting, “down, down, with deportation, up, up, with liberation.”

Representatives from the Harvard Prison Divestment Coalition and the Harvard Undergraduates for Environmental Justice, which advocates for University fossil fuel divestment, also spoke at the protest.

Doris Reina-Landaverde, a Harvard janitor, spoke on behalf of TPS workers on campus and stressed the importance of retaining her driver’s license.

“The license for us is ending the day that TPS ends,” she said. “I’m so happy, really happy today, to see you all coming here to support us.”

“These workers have been working here for 15, 20, 25 years. They are majority in the unions, unlike other constituencies in this country,” Childs said. “They know when they went after TPS that they were going to dismantle the unions. That’s why we have to fight for them, because an attack on TPS is an attack on every worker in this country.”

Jeremy A. Stepansky ’21, another founding member of Harvard Students 4 TPS, was stopped at the entrance to the building by security and had to hand the petition off to be taken inside.

“We kind of hoped we’d be let in,” he said. “We’re going to be watching what they do in the coming weeks and days in terms of adhering to those demands.”